Upon check-in, Hippie-Surfer Dude said, “There’s a cave up those tracks, brah…you should totally check it out.” So we did, and what we found astonished and terrified us. 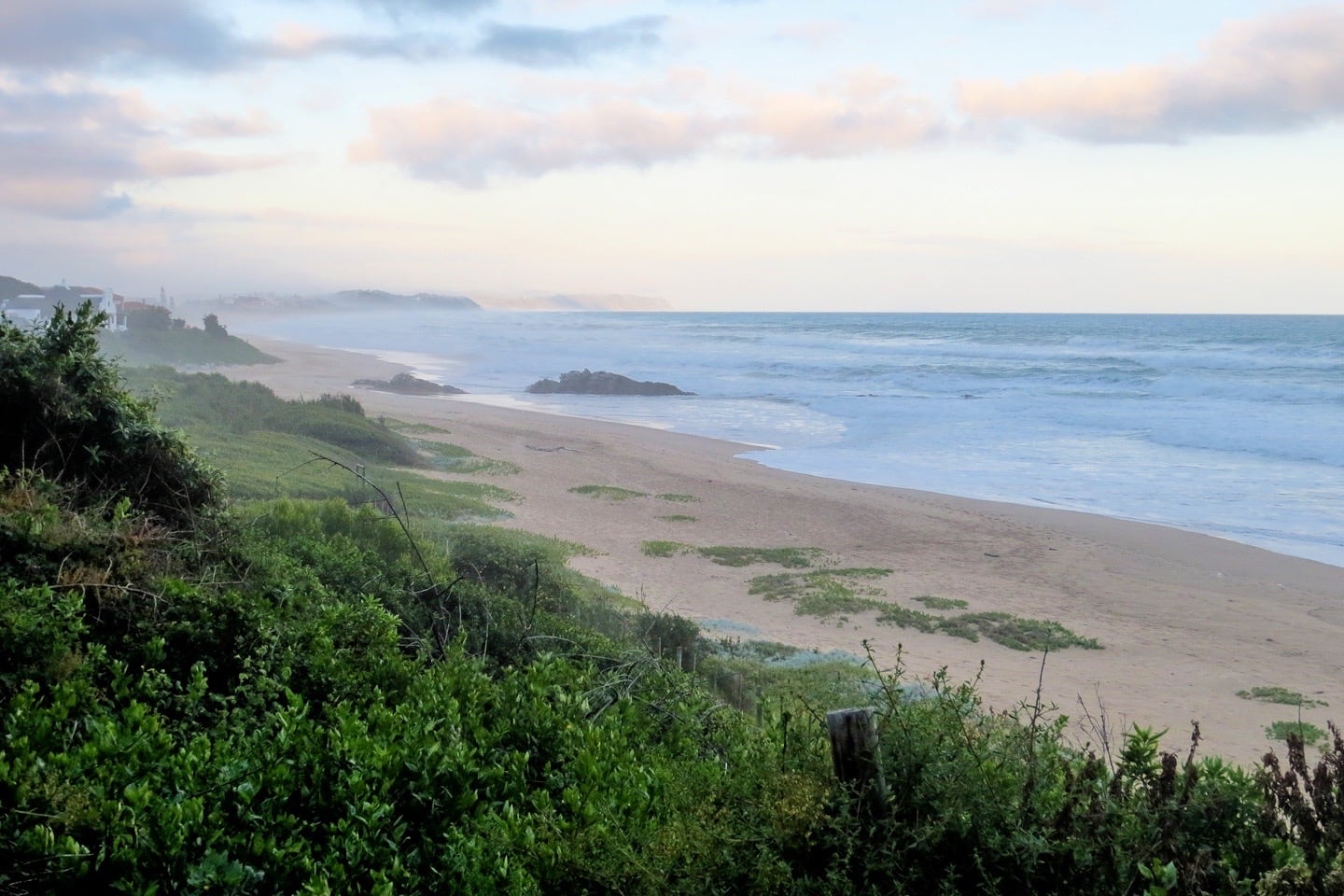 After a long and beautiful drive through the Little Klein Karoo, we passed through the busy city of George and descended down a dual carriageway at the mindnumbing speed of 60 kph (about 35 mph, the posted speed limit) until we arrived at Wilderness, a village so-called because at one time or another it actually was true wilderness, but these days, it’s a quaint seaside village very much connected with the rest of the world via one of South Africa’s major highways.

We stayed at Wilderness Beach Backpackers, wedged between the spectacular elevated causeway above and the beautiful Wilderness Beach and Indian Ocean splayed out below. It ended up being one of the nicer places we’ve stayed along the coast in South Africa and a lovely place to spend a few days.

Upon check-in, Hippie-Surfer Dude told us, among other things, that there was a good hike to a nearby cave and that we should check it out. He then proceeded to give us directions, pointing towards the train tracks wrapping around the Headlands to the west. We didn’t see a trail so were a bit confused. Hippie-Surfer Guy laughed and said, “No brah, you walk along the tracks. Don’t worry, brah, they’re totally cool.” Then he pointed towards the landslide covering a significant portion of the tracks. We got the drift. 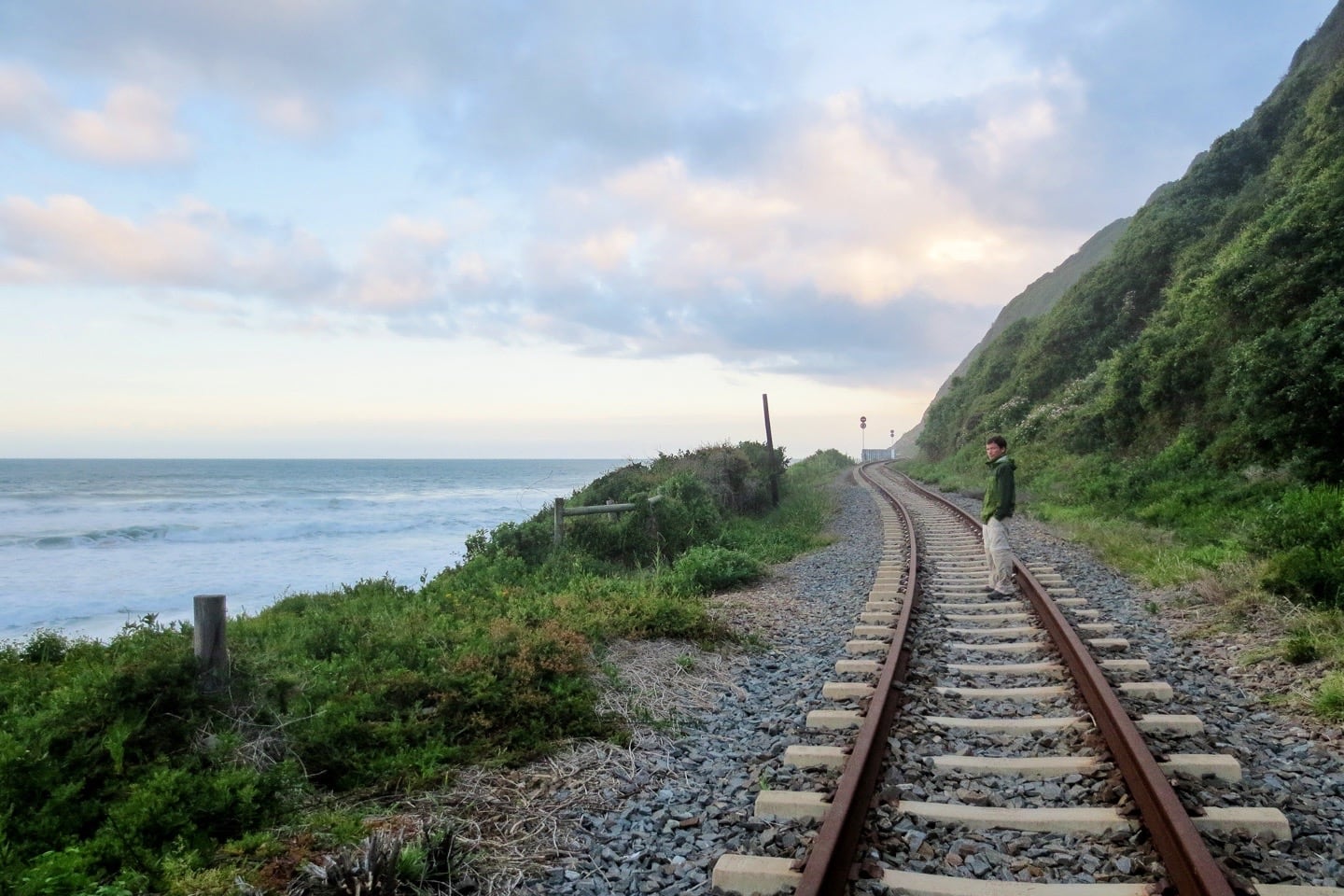 So later that day, as the sun was going down (best time to start a hike, right?) we started out along the tracks. About five minutes along, Lori asked if I had brought the headlamp. No (I thought Lori had). Lori: “Did you bring your iPhone?” Me: “No…” We’re off to explore a cave at sunset with no flashlight. Awesome. Nonetheless, we kept on going. 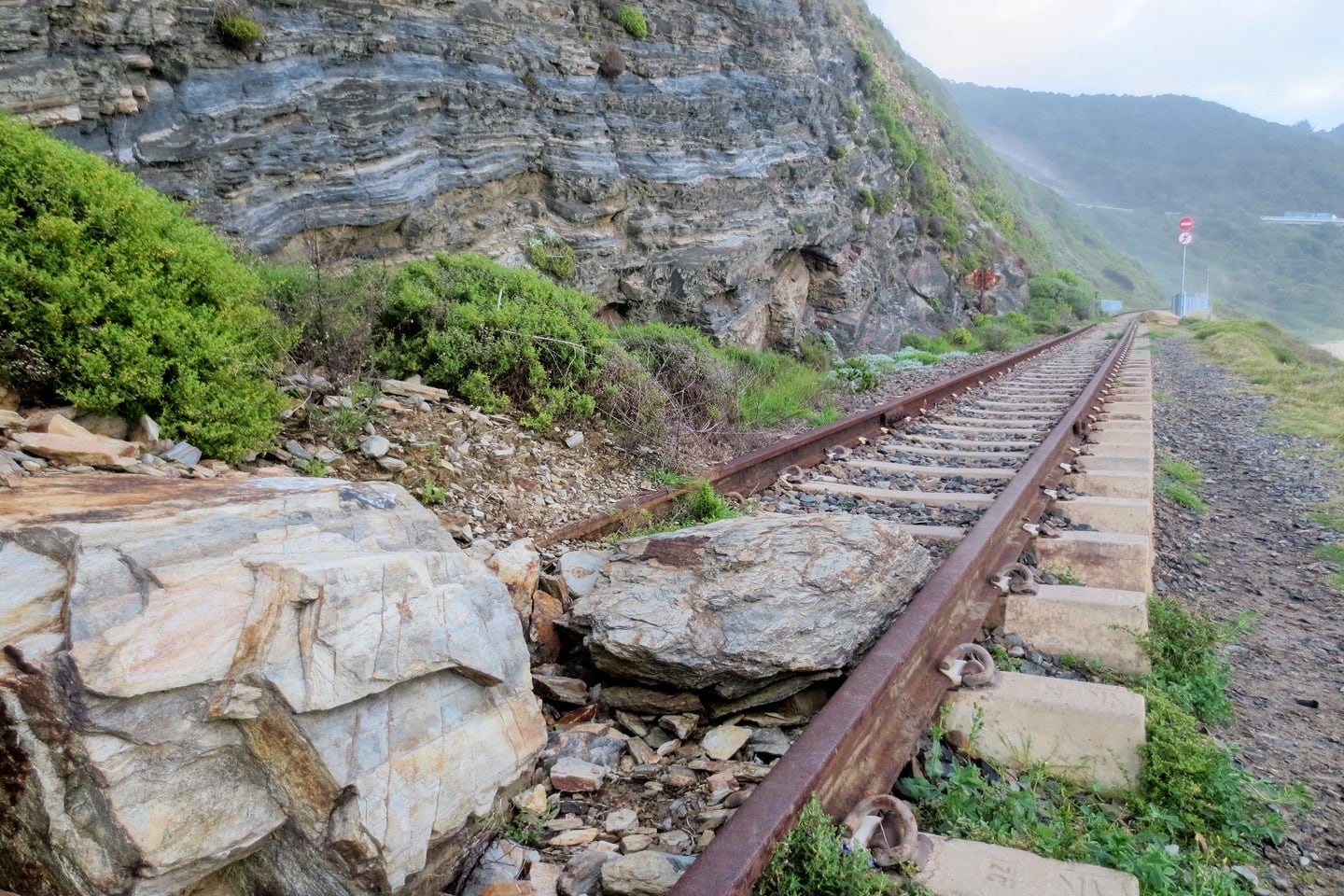 It was a foggy, misty evening, which certainly added to the drama of the whole event. The sea was high and ferocious, foaming like a madman. After a while, we came upon the landslide. Recent landslides which have taken out highways or train tracks always have a creepy air to them. This particular land slide is a bit sad as it represents the hard economic situation of the area. A popular, but seasonal steam locomotive plied these tracks for years and the ride was a favorite among holidaymakers.

The choo choo, as it was affectionately known, ran from Mossel Bay along the Garden Route to another seaside town farther past Wilderness, as we were told. In 2006, major flooding caused landslides in many parts of the area, including this section of the choo choo. While the choo choo was fully booked during the high season, stakeholders couldn’t justify the enormous repair costs which would take years to recoup. And so it remains untouched for the past eight years, but for a handful of intrepid hikers and a handful of other folks, which we’ll get to in a moment.

We clamored over the landslide, which dropped directly into the rocky sea below (but had a well-worn path up and over) and continued along the tracks until we came to a dark and creepy tunnel. This must be the cave Hippie-Surfer Dude was talking about. Hardly a cave, but still cool. Yet, we weren’t sure how deep we wanted to venture without a light. How far did it go? Maybe someone was lurking in there. Animals too. Maybe we should turn back. Maybe not. Hippie-Surfer Dude would have warned us if something wasn’t cool, right? Maybe not. After some consideration, we decided to venture forward a bit more… 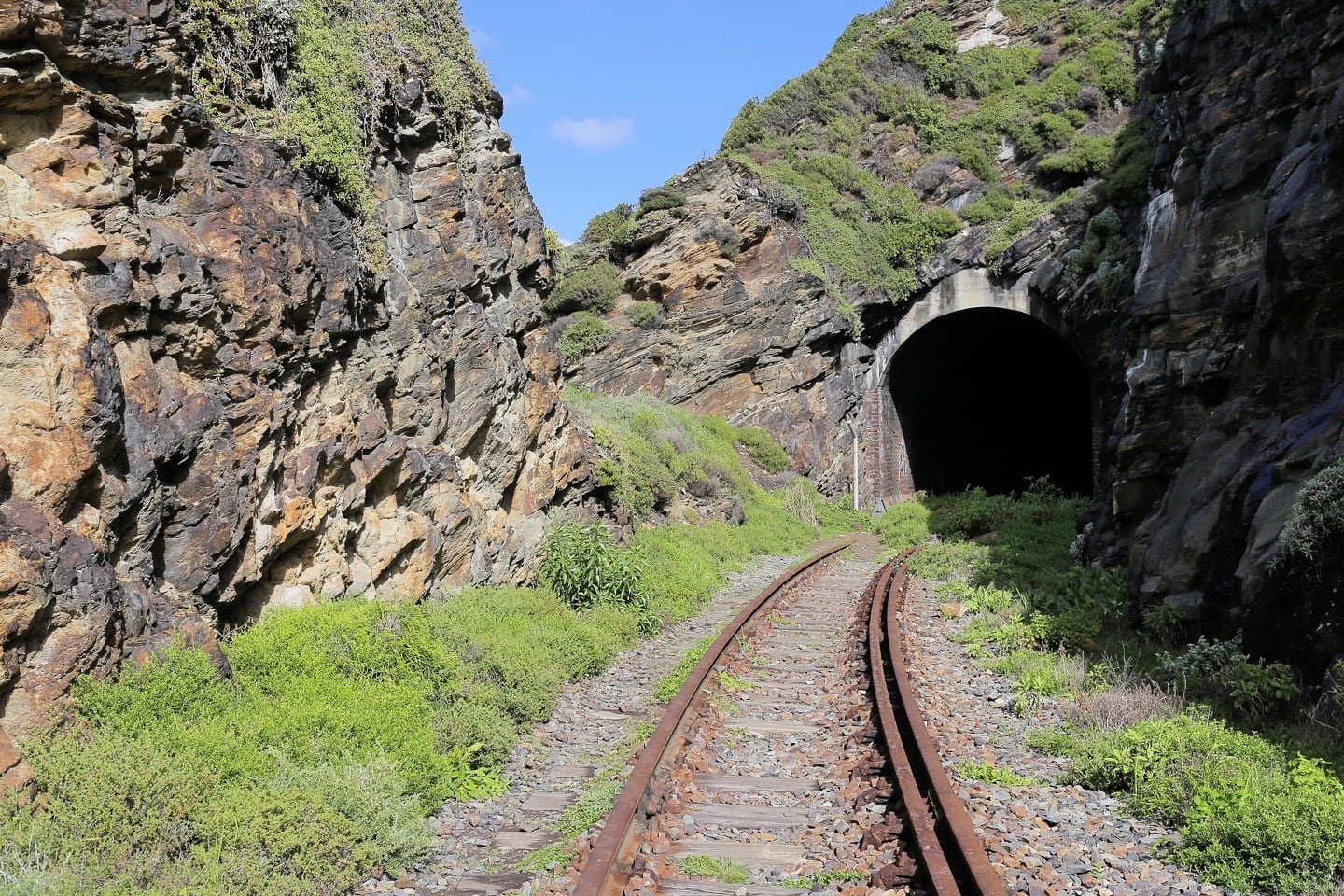 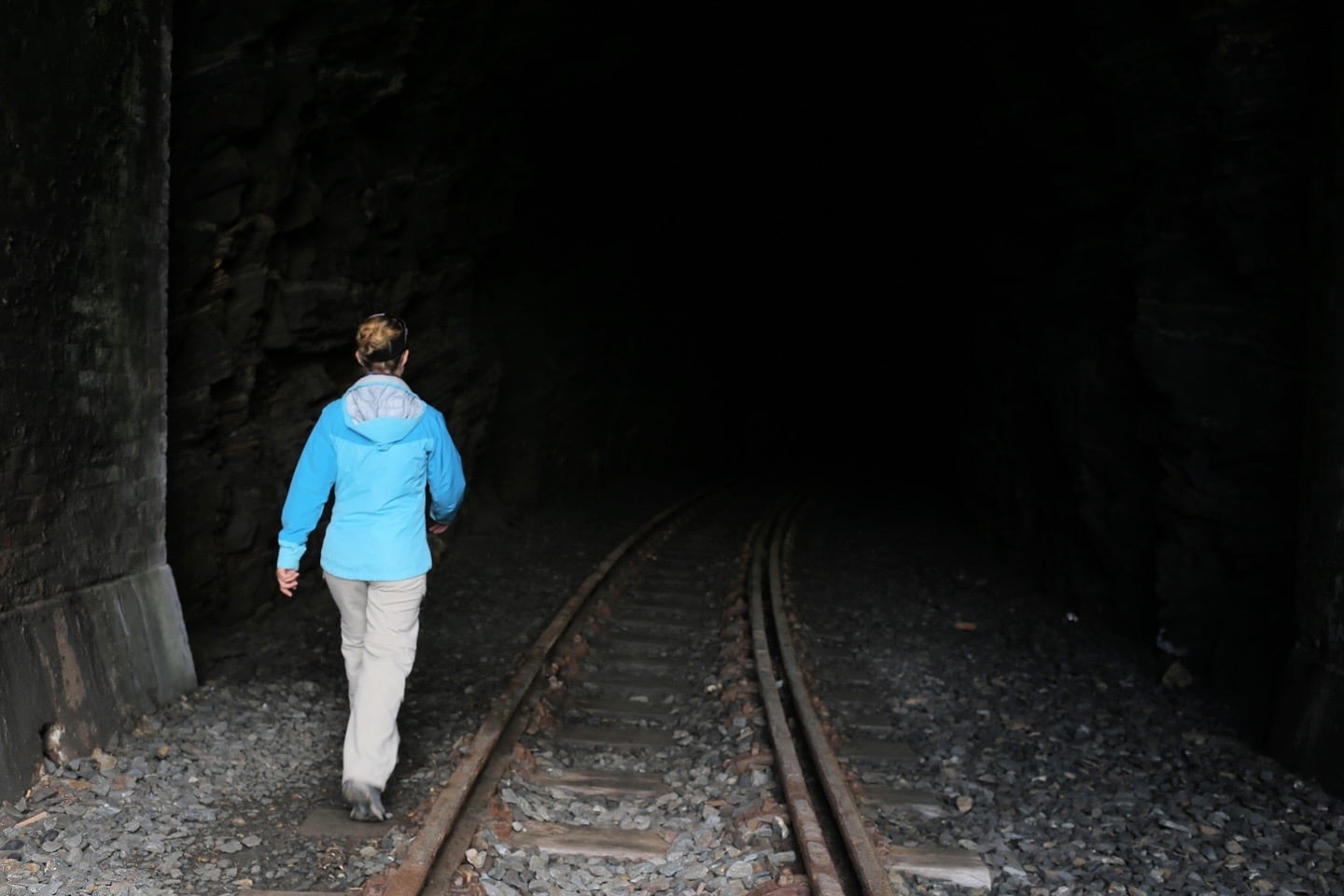 As the tunnel made it’s way around the bend, we spotted light and our eyes began to adjust. We could see the sides of the cave very clearly now and could tell that nothing was lurking inside. So we continued towards the light wondering what we’d find on the other side. As we neared the other end, we could make out a bay, then what appeared to be the ruins of something…a station perhaps? No, not quite. 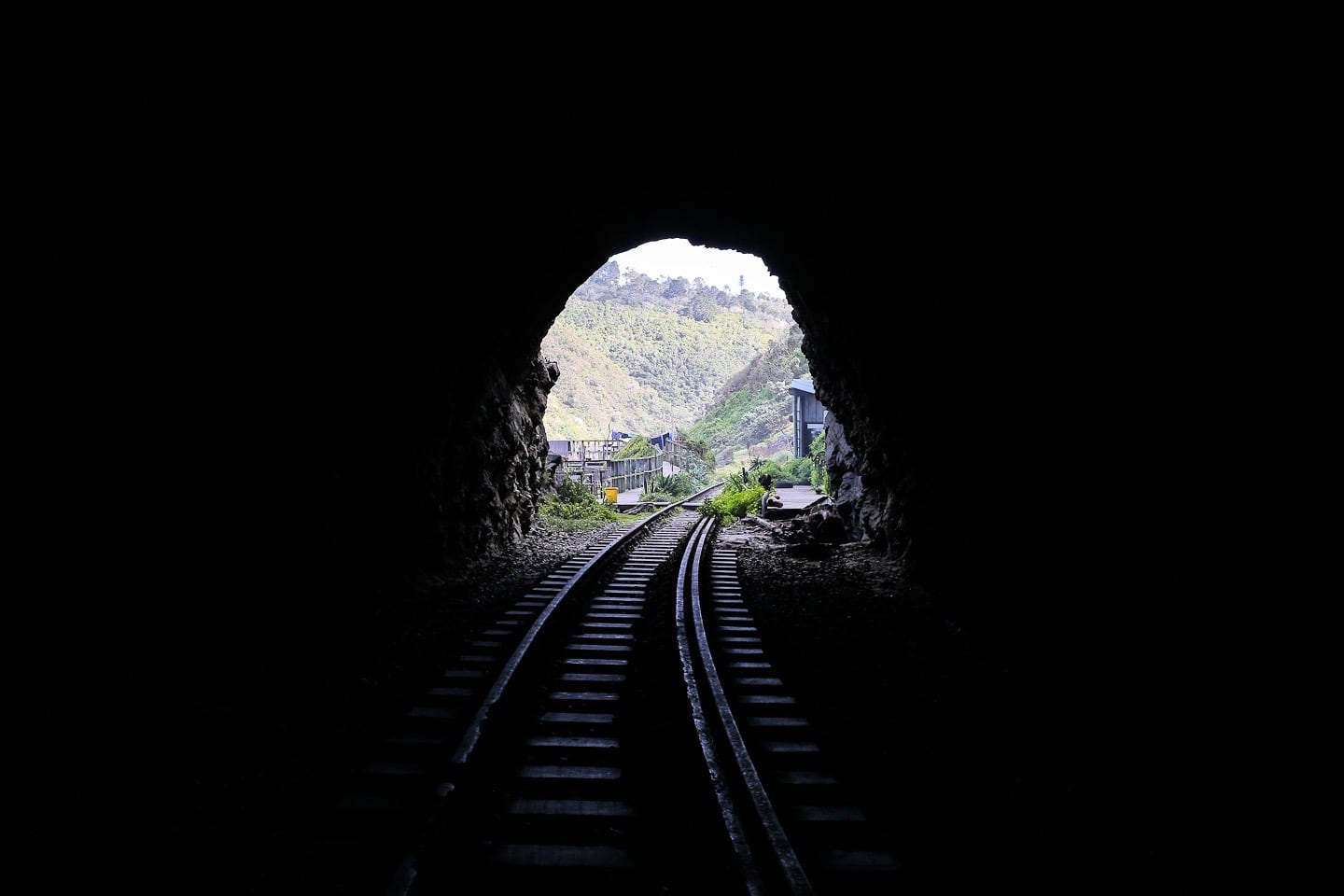 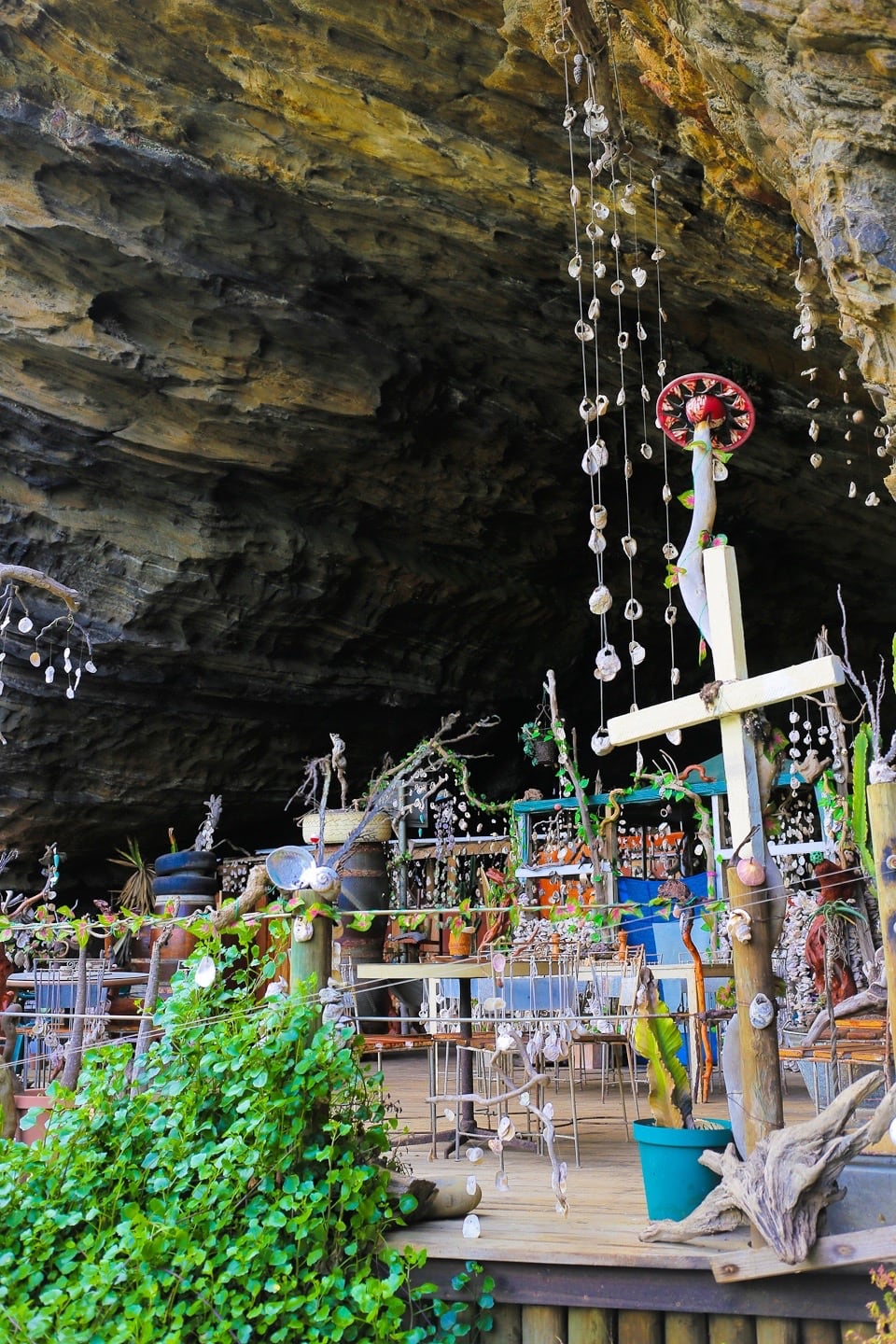 Ok, this is creepy. It’s now getting very late and dark and there’s a man and a large cave with stuff hanging all over. But the man was well dressed and well spoken. He was very excited to see us. In the waning light of the day he said, “Come. Don’t be frightened. My name is Samuel. Let me give you a tour.” I’m not sure what compelled us in near-darkness to follow this guy deeper into a cave that was by all accounts creepy and a bit terrifying in the darkness.

But we did. He lit a candle and we followed him through room after room of clean and tidy beds and seashells and other things collected. Samuel kept talking about ‘him,’ the guy who apparently put this all together. But where exactly was he? I asked if people stay here. Samuel said yes. I asked if it was a guesthouse of sorts. Samuel said no. Over a dozen rooms, a small kitchen and then, Samuel’s office, full of books and quotes from Scripture. I tried my best to keep our bearings as we were led deeper and deeper into the cave, but it was difficult. Then, finally, when we seemed to had ventured so far that I was completely disoriented, we emerged back out onto the train tracks.

Samuel told us we shouldn’t venture any further down the tracks because there isn’t enough light, but said we should return in the morning to see the place and continue on down the tracks to a hidden beach. We thanked him and hurried back to our guesthouse, processing what we had just discovered along the way. 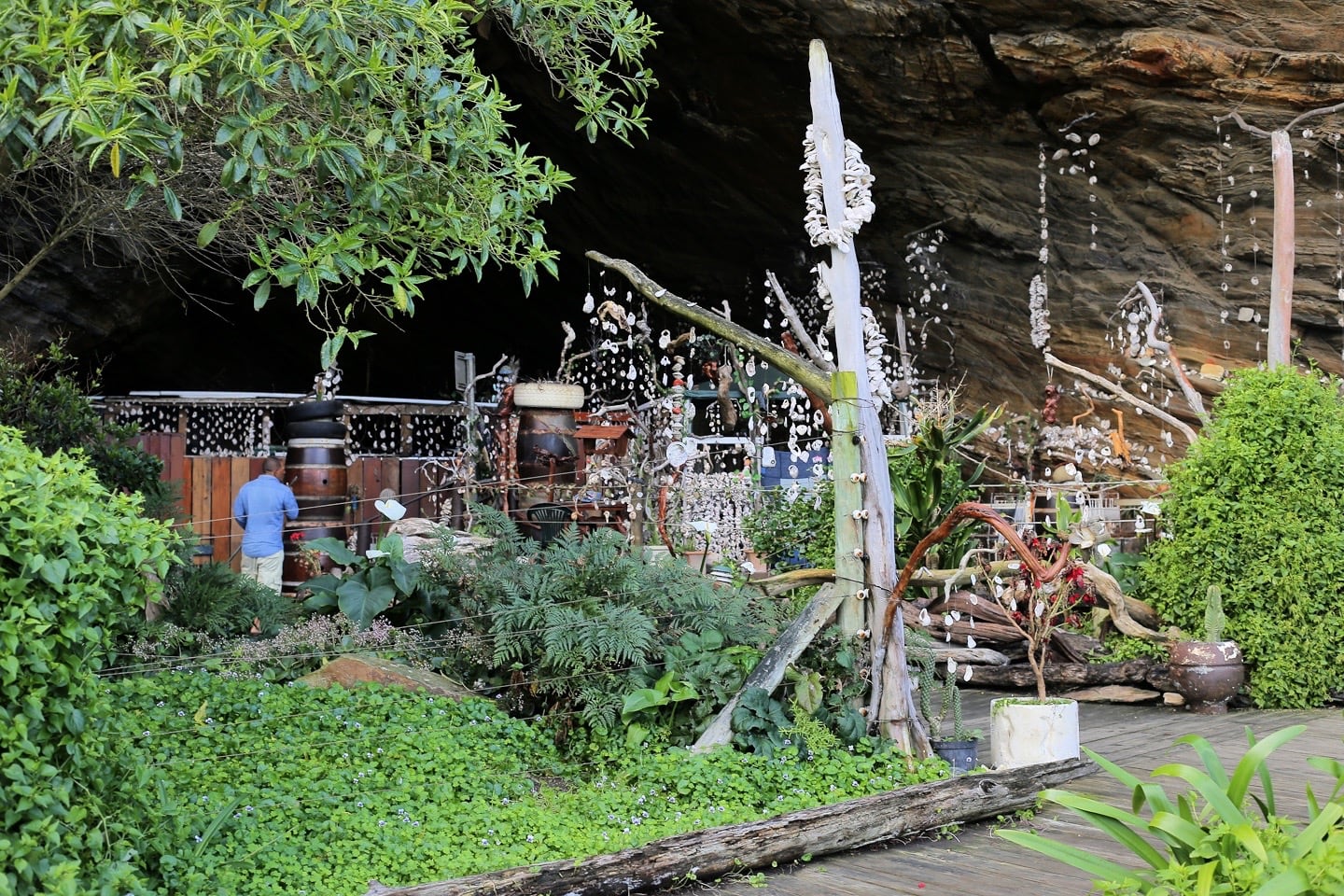 These three photos of the cave, admittedly, were taken the next day. Lori had brought her camera on our first venture to the cave, but we didn’t take any pictures. It wasn’t a situation where we felt comfortable doing so. 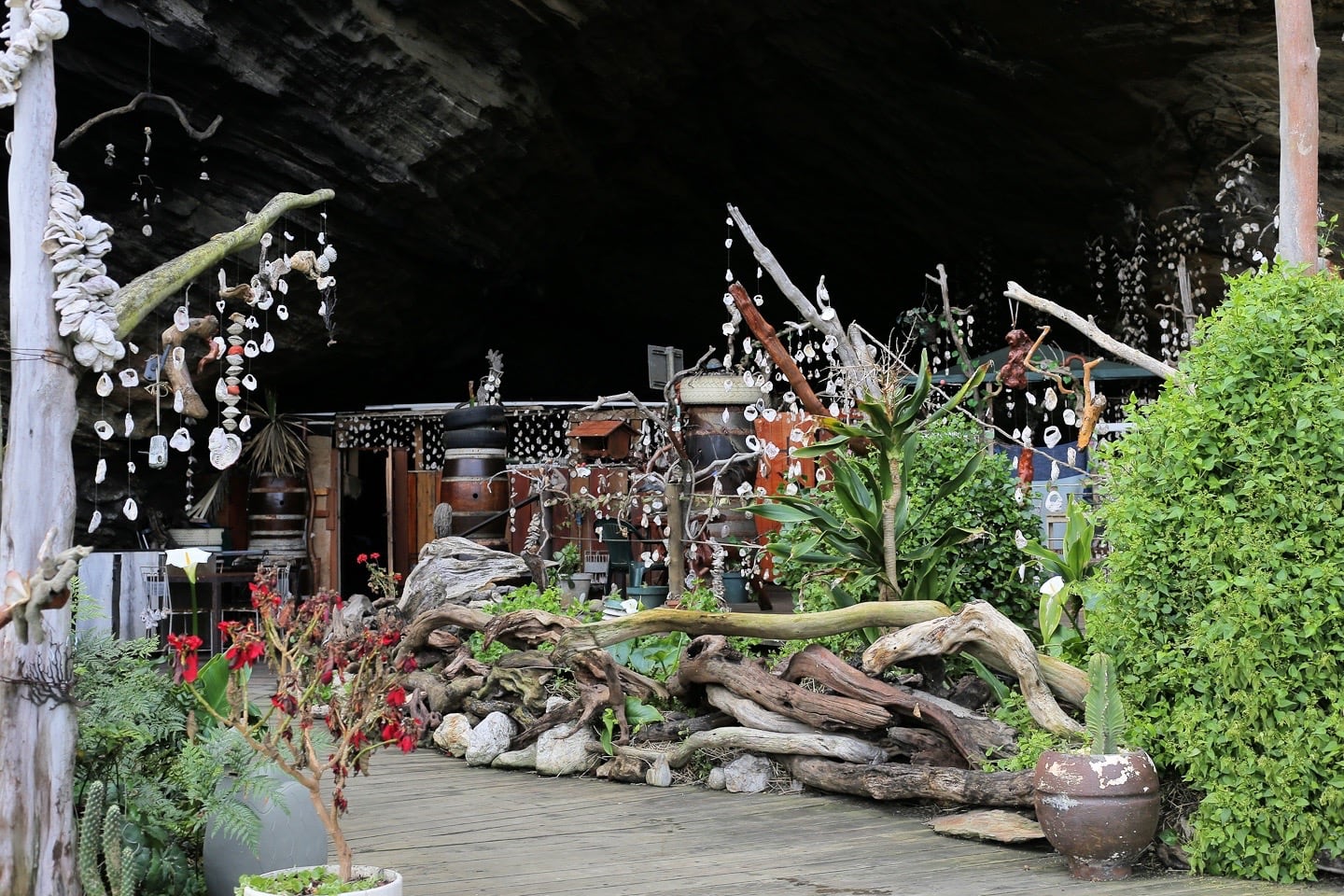 It was much lighter when we emerged on the beach side of the tunnel and we decided to go for a walk along the beach before meandering back. 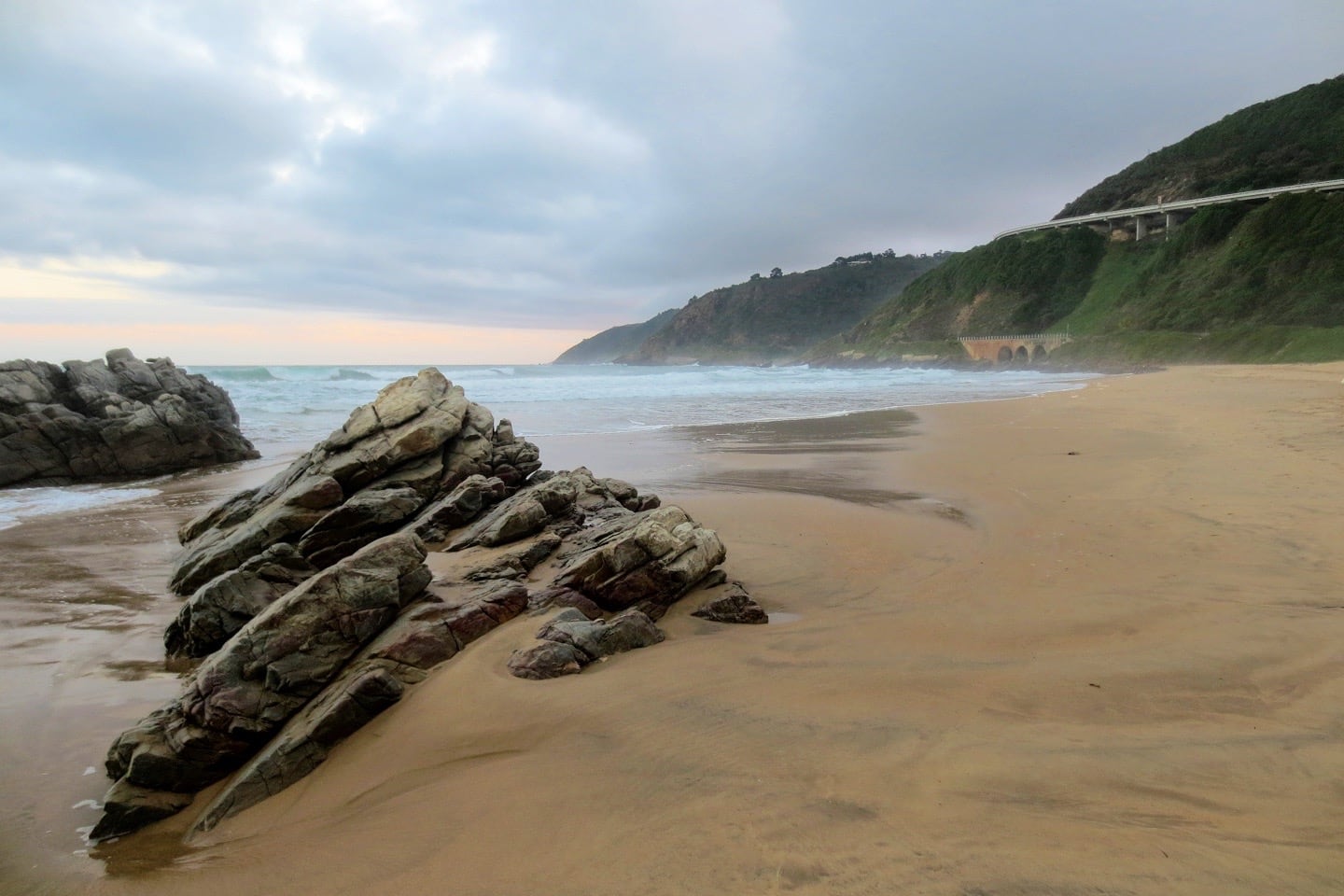 The beach was littered with Portuguese Man-of-War carcuses, one of the most venomous jelly fish in the world. I had a run in with a dead one in Mozambique some years back and that was enough for me. Needless to say, we kept our shoes on. 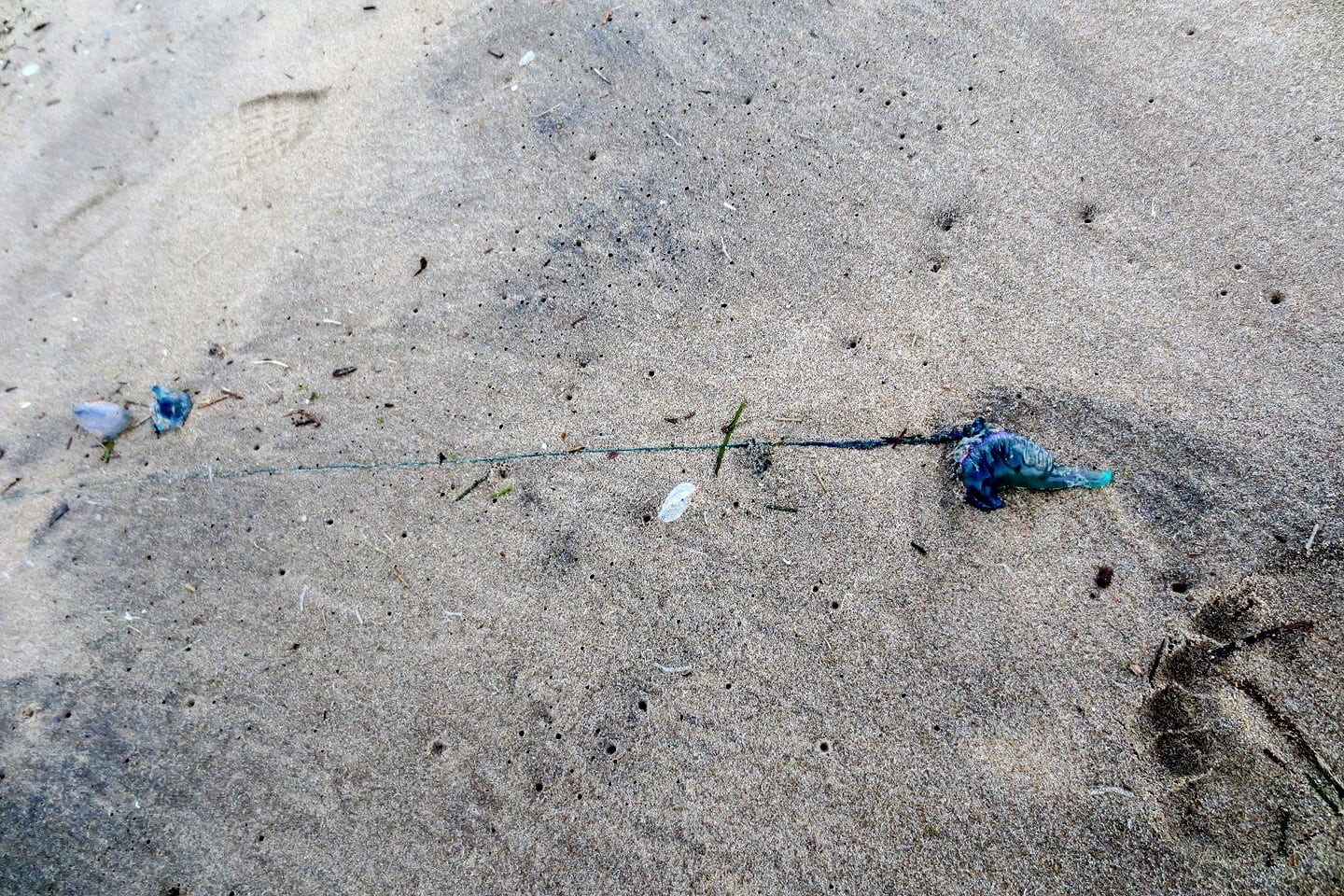 In the morning we decided to return and head up farther along the tracks to the beach that Samuel had mentioned the night before.

It was a gorgeous day, bright blue sky and lots of sunshine, which made the trepidation we felt the night before almost laughable. 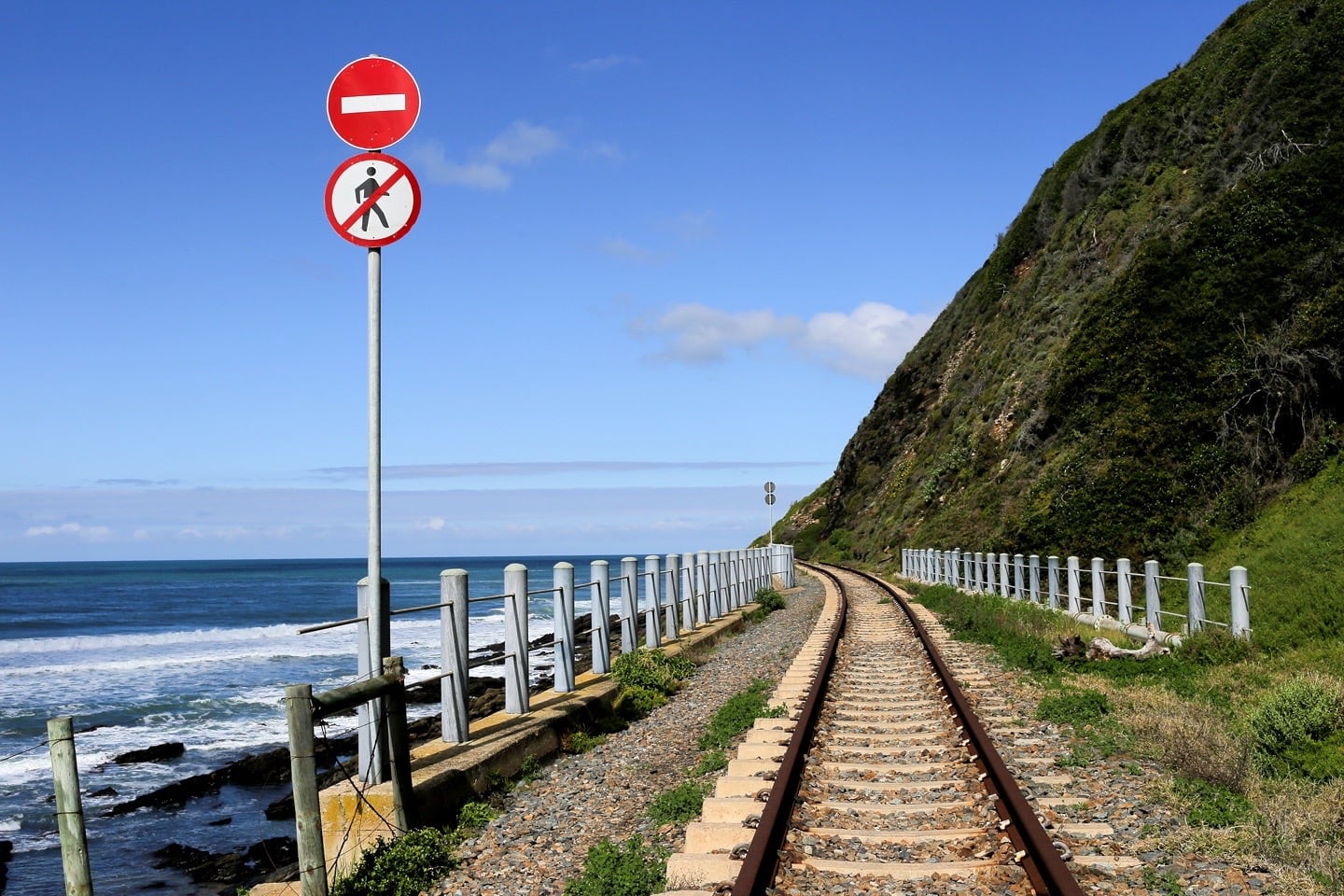 The tide was out and the sea seemed becalmed, a very different scene from the prior evening. 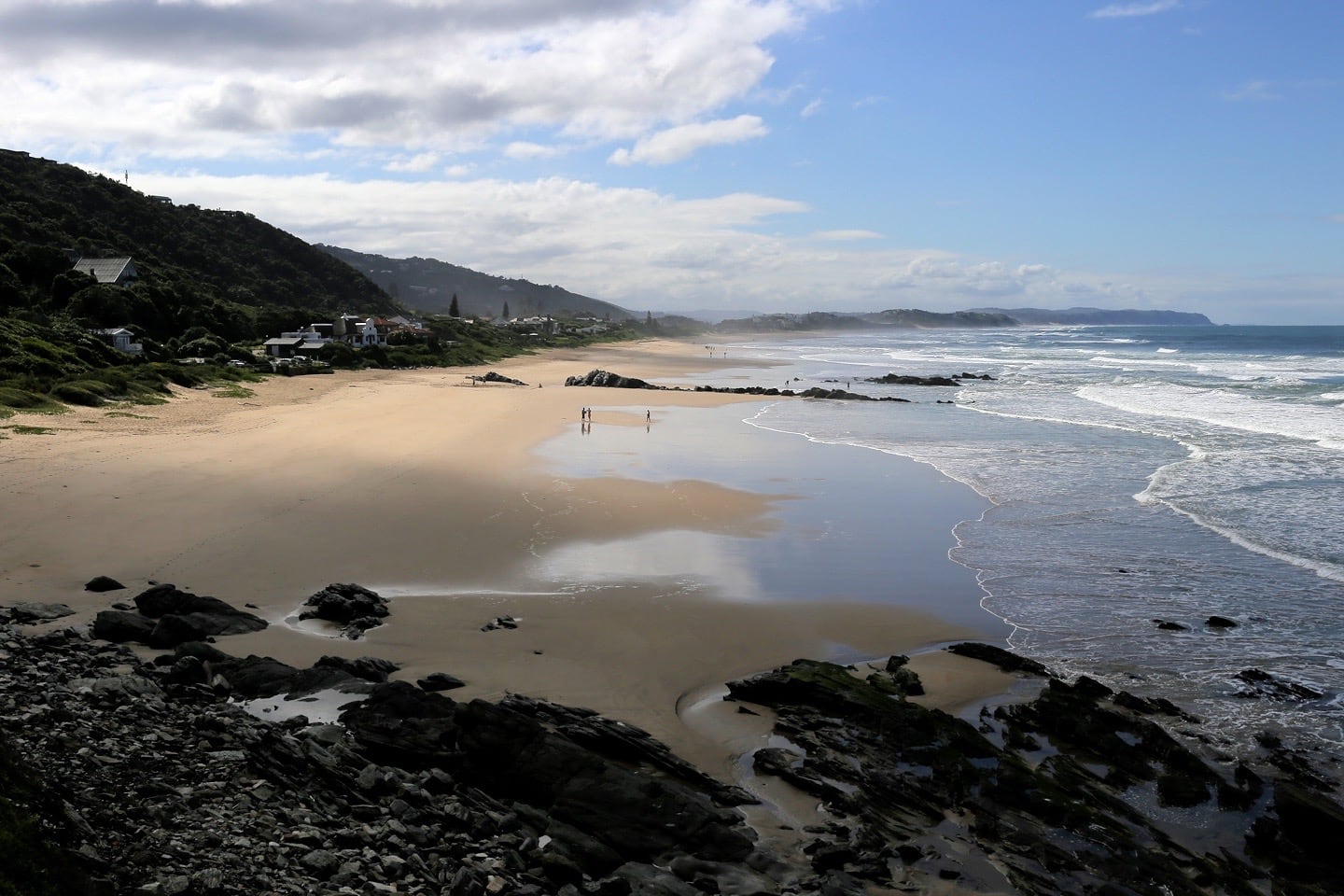 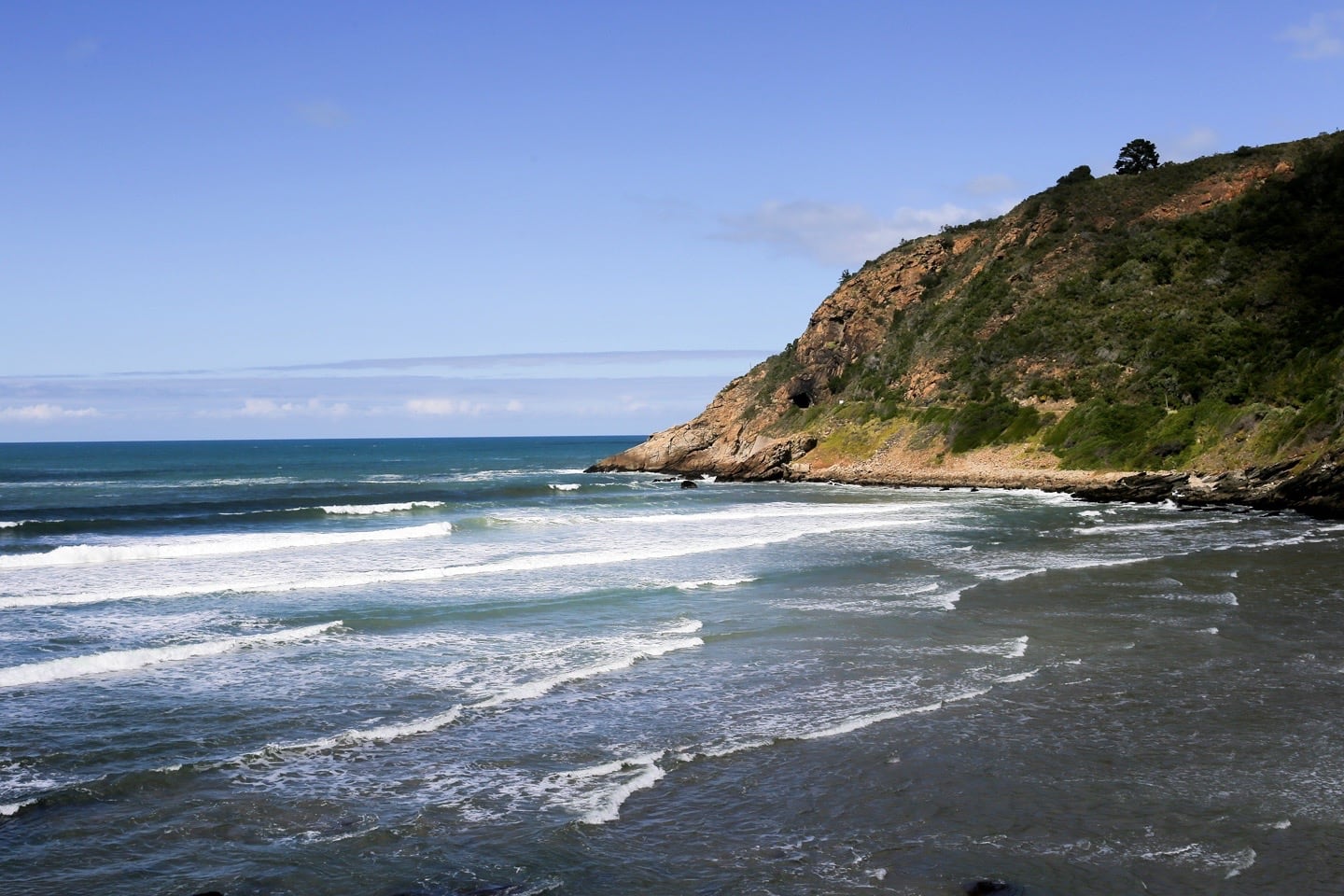 We traced the tracks past the mysterious cave until they ran across a bridge high above a shallow bay. The bridge looked small from the cave, but upon reaching it, we realized crossing it would not necessarily be a walk in the park. The old rail bridge must have been about 50 feet above the sand. It was a bit rusty in places, but seemed solid enough with a railing. Nevertheless, with the wind whipping up and a clear view of the ground below, it proved more nerve wracking than originally thought. 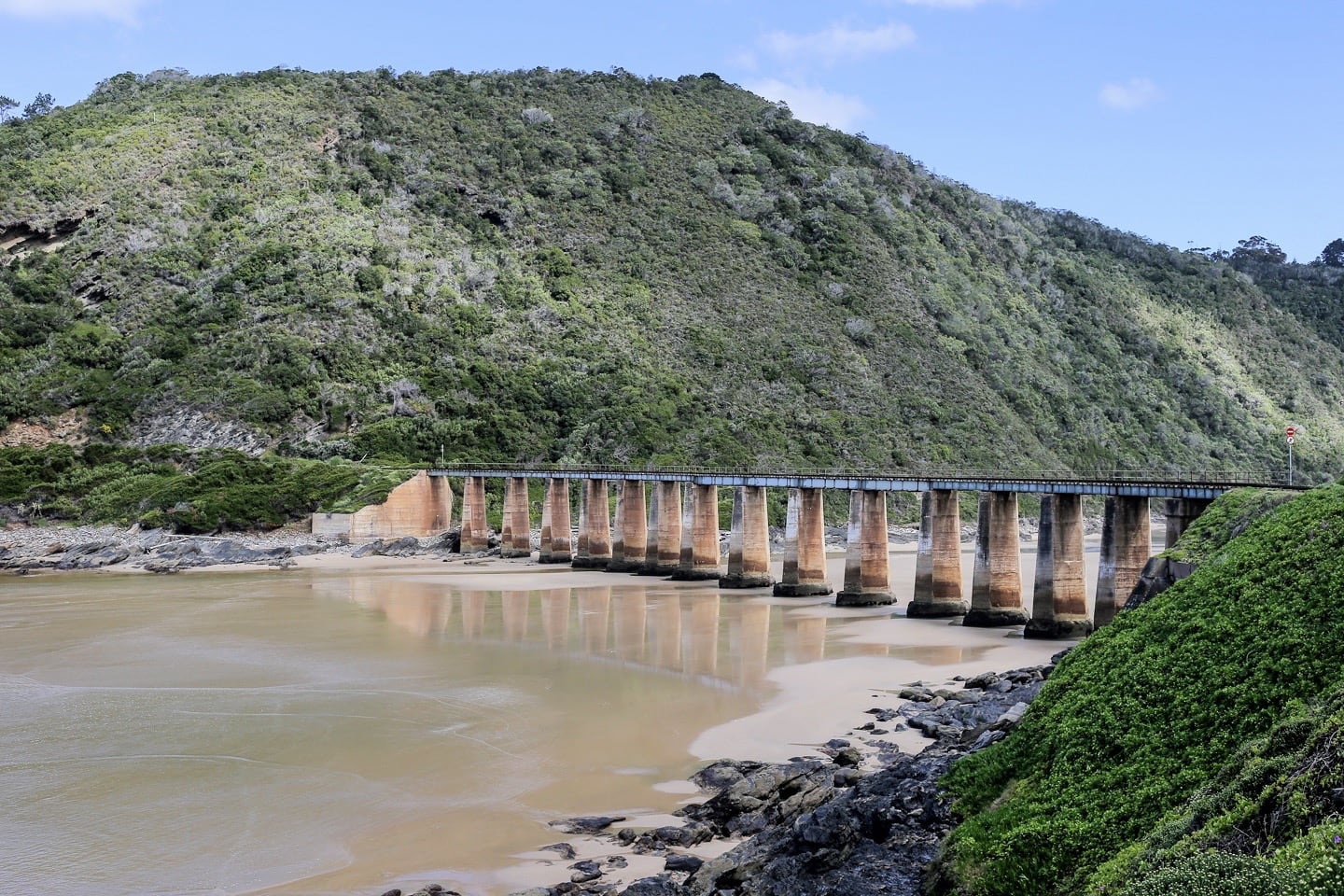 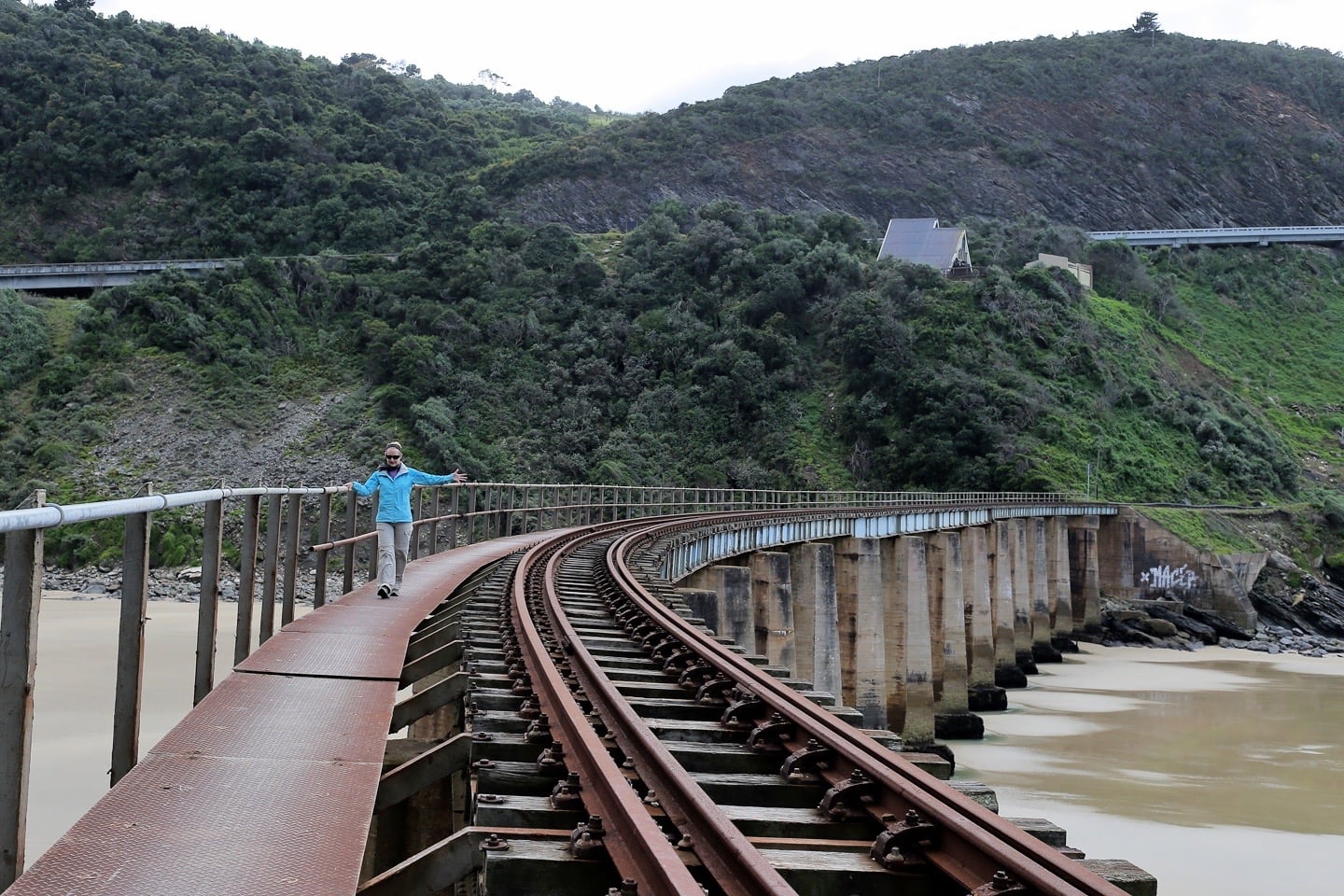 Evident in the picture above, ruins of once beautiful vacations homes still cling to the cliffs above. The elevated causeway meanders through the slide zone largely unaffected by the destruction and decay. Lori takes her time walking across the creaky, rusty steel floorboards, trying not to fixate on the five-story drop on either side. 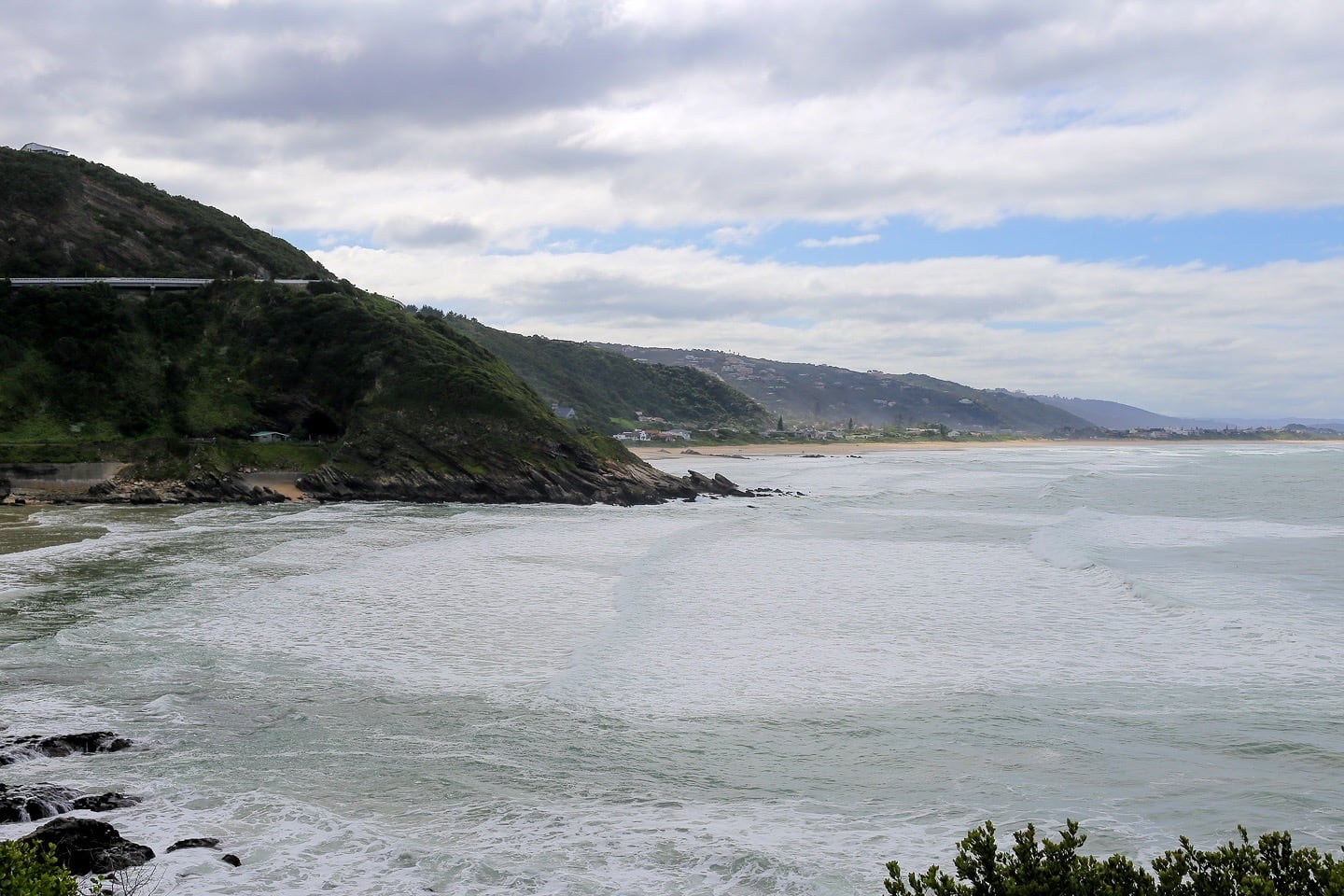 Safely on the other side, we continue along the tracks around the other side of the bay. Looking back, we can see the bridge, the cave house and Wilderness beyond.

We continued on through two more tunnels until we finally reached the hidden beach — Victoria Bay, holidaymakers’ paradise and surfing mecca. 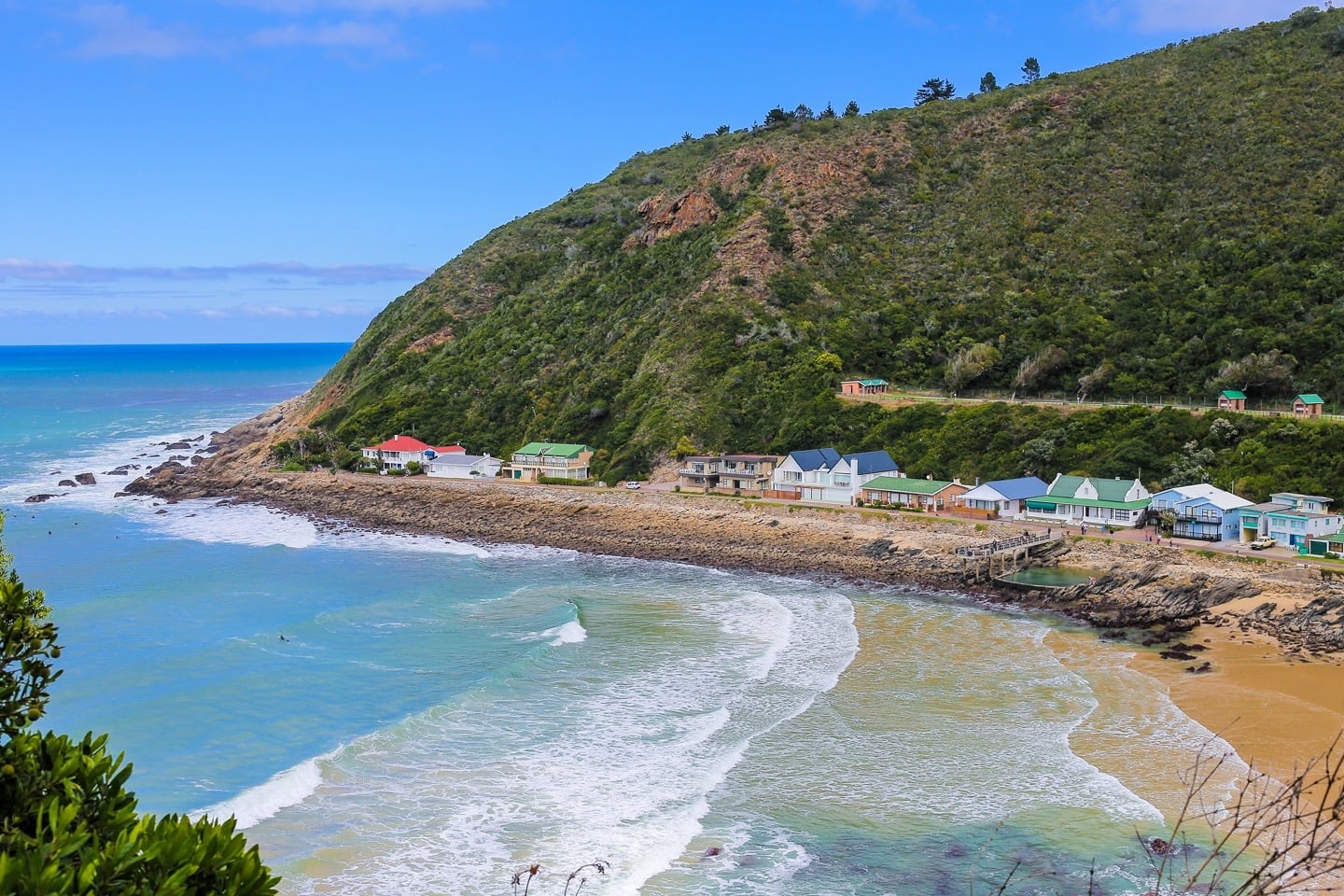 We took in the beauty of the small bay and watched the surfers for a while before turning around and heading back. The walk from our guesthouse to Victoria Bay took about 30-45 minutes. 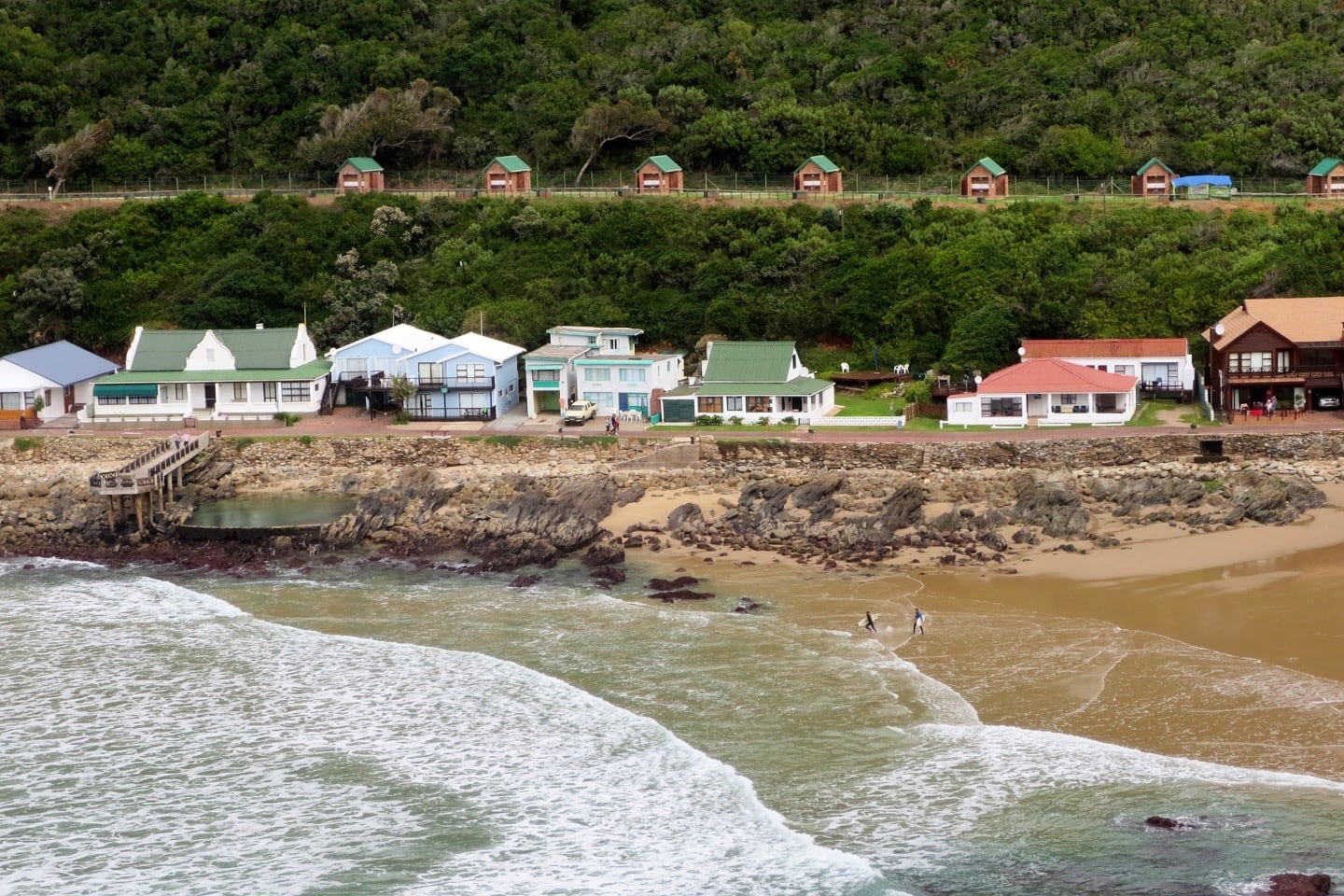 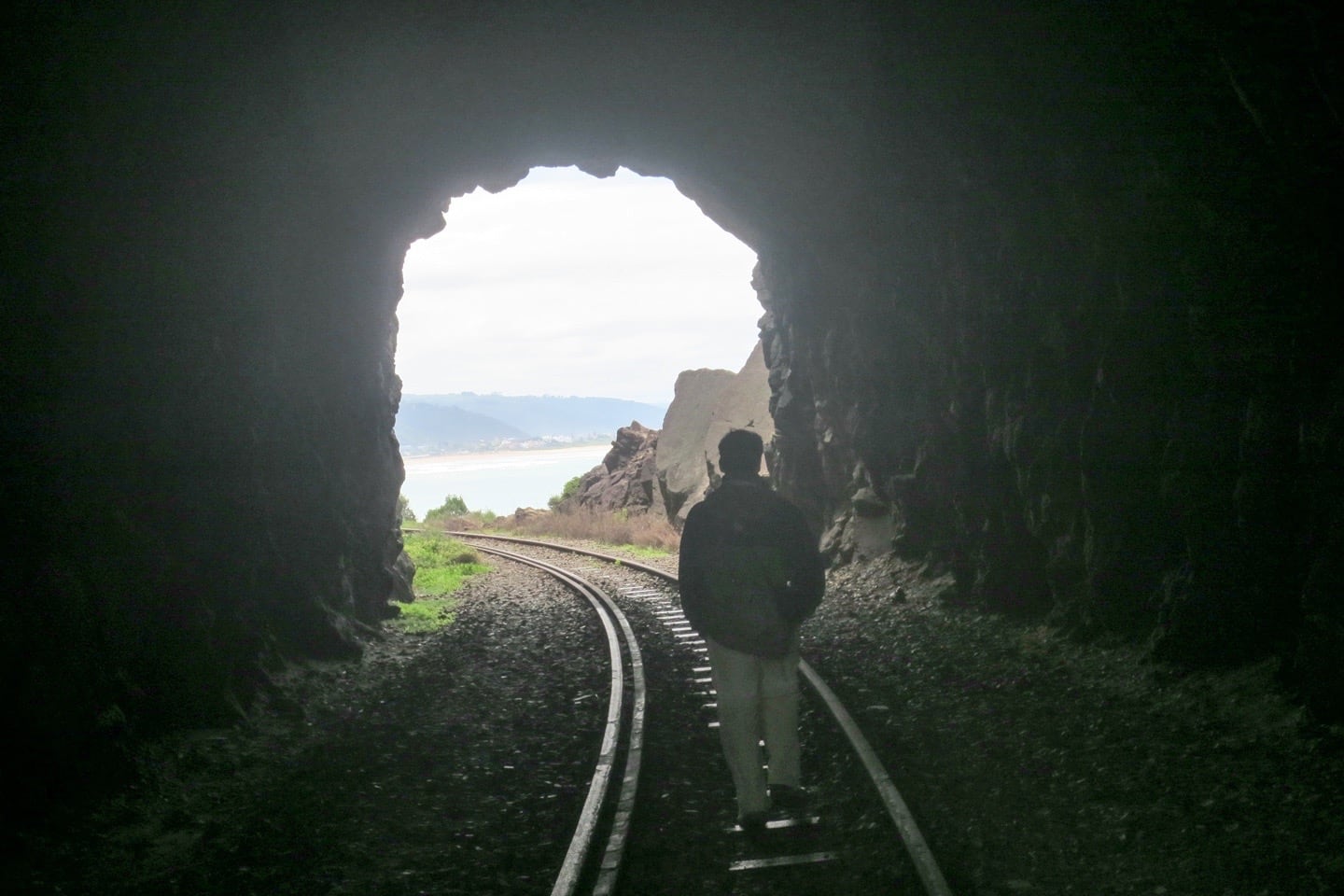 We ran into Samuel and his dog on the way back who told us a bit more about the cave and the train tracks. Apparently, the cave was a cafe and popular stop along the choo choo train route. Choo Choo riders would disembark, grab a coffee and sandwich and take in the beauty of the bay. After the landslide, the business went belly-up. Now cut off from the world, the cave cafe fell into disrepair and was abandoned until ‘he’ came along, took it over and made it a large home. The guy that Samuel spoke of created several rooms and decorated it with things he found on the beach. He then turned it into a rest home for homeless people and people struggling with addiction. There were currently four guests staying there. The complex has modern toilet facilities left over from its days as a cafe, and by all accounts is clean and comfortable, though it likely gets very cold in the winter time. 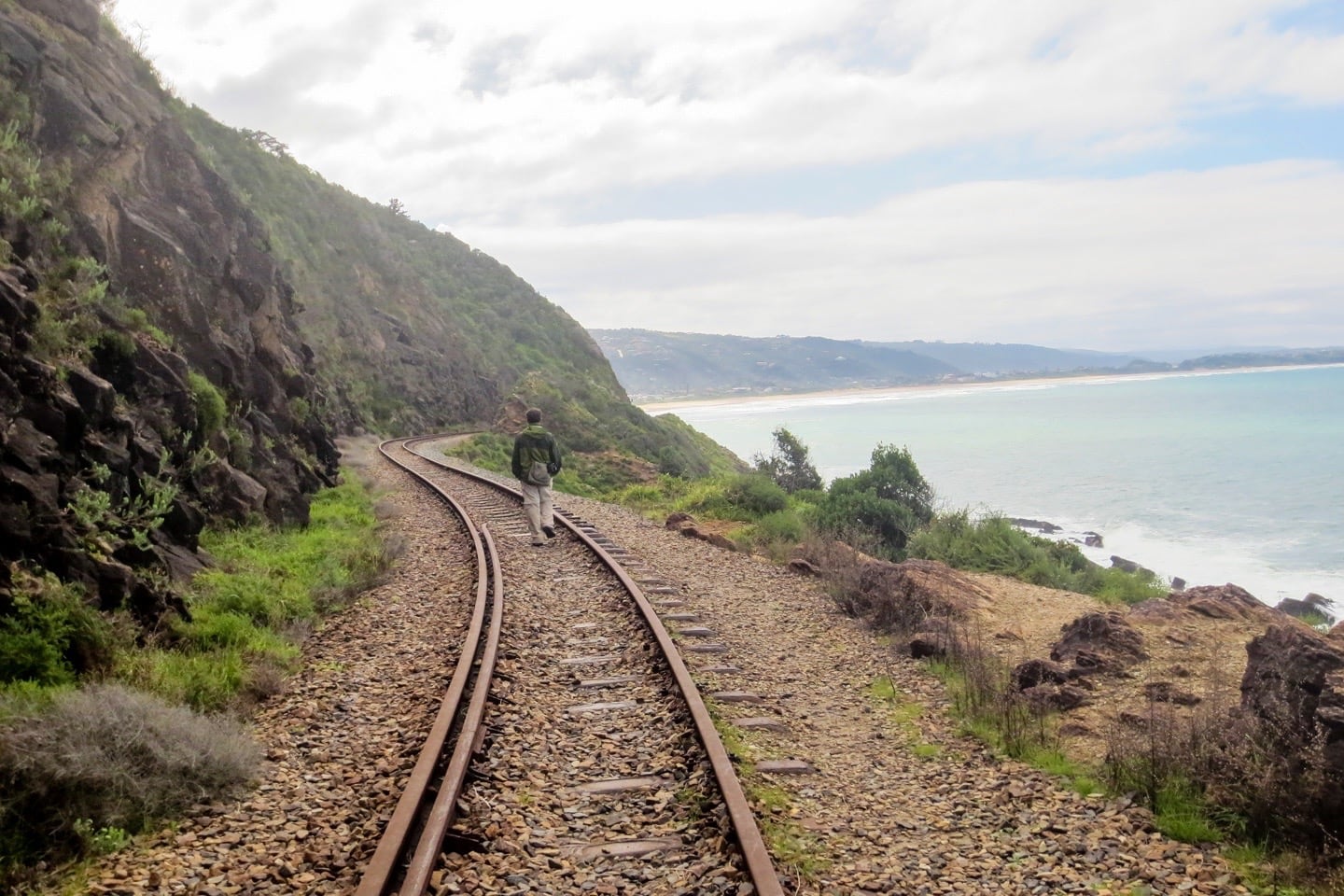 Apart from being a Baz Bus stop (I’ll detail my disdain for this later), Wilderness Beach Backpackers proved a very nice two-night stop along our route. It was clean, affordable, friendly and cozy. And the views were pretty incredible, certainly by ‘hostel’ standards.

WBB is also a short walk from Wilderness village, which is quaint and worth a visit in its own right. Hippie-Surfer Dude recommended Cocomos in the village, which had 2 for 1 ‘jars’ (mixed drinks in jars) with live music. We opted for beers instead, and the live music was ok, but the pizza was pretty fantastic. 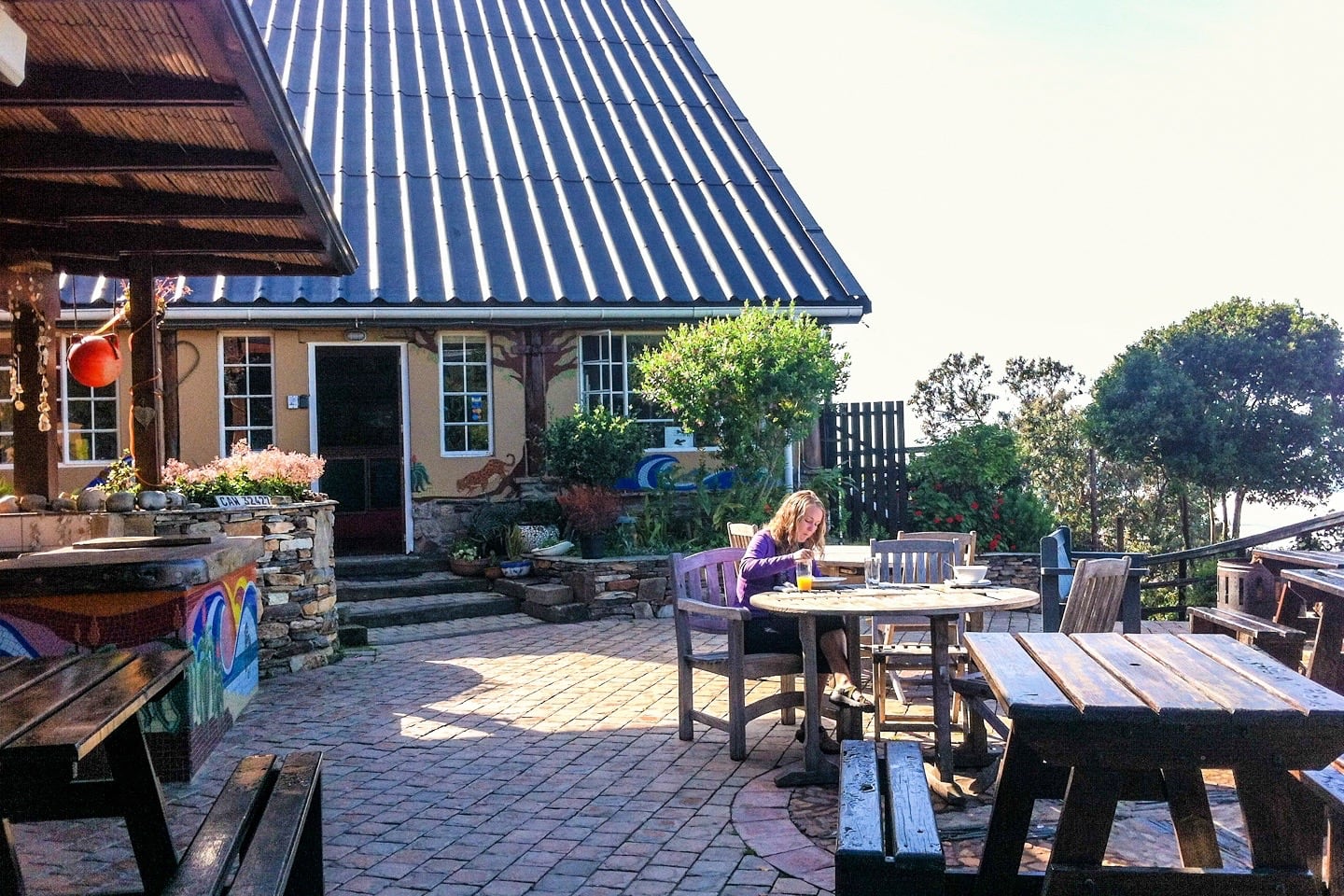 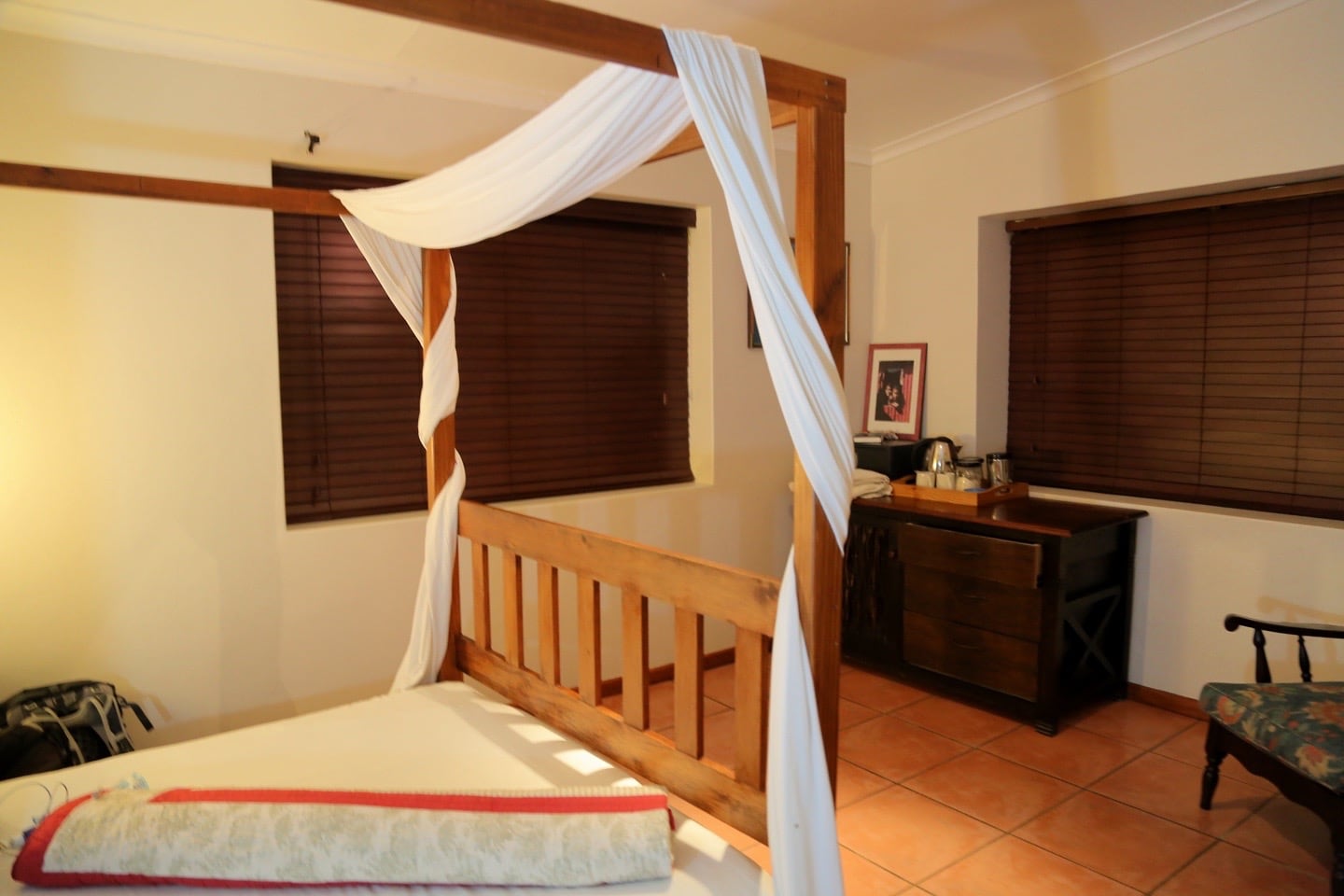 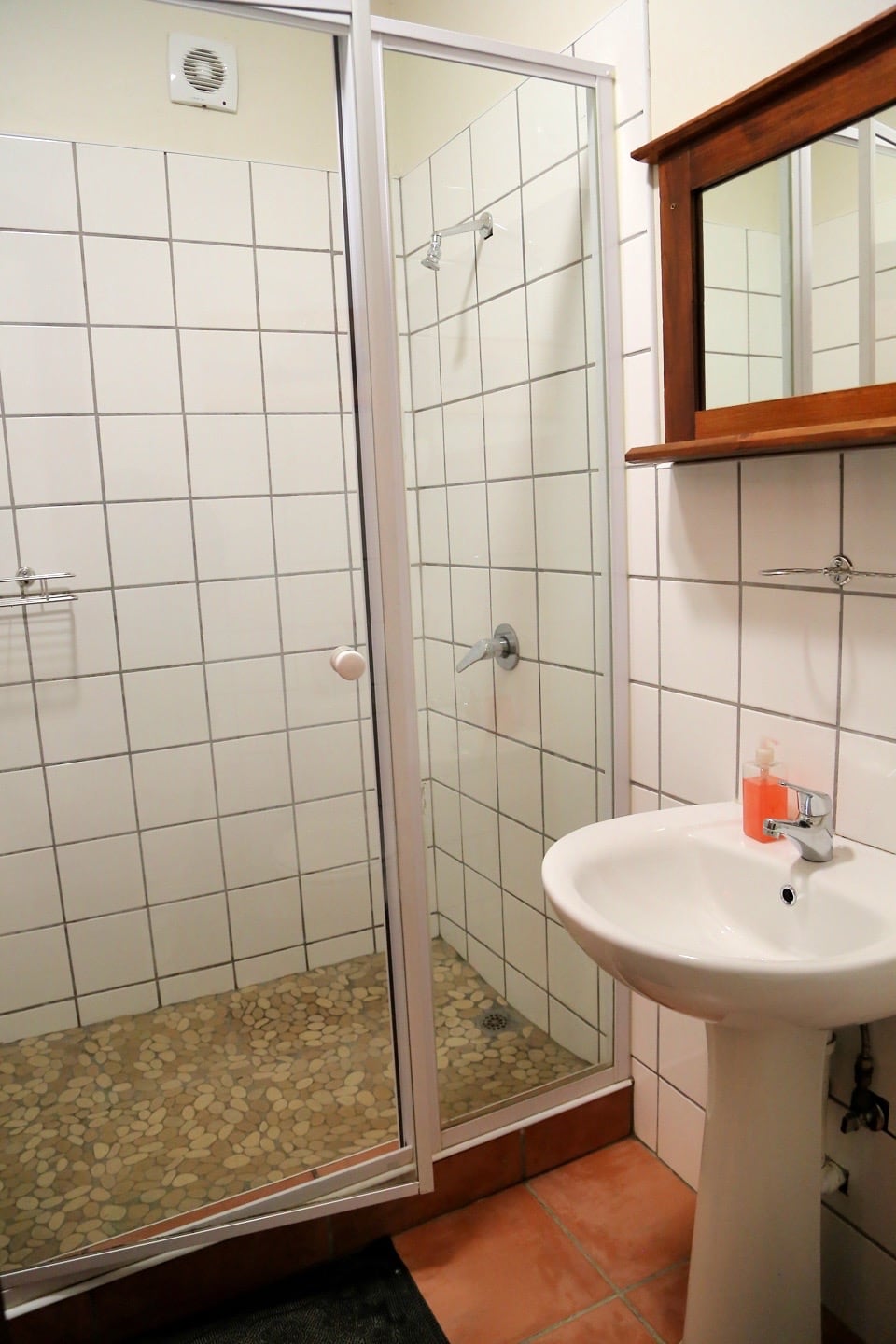 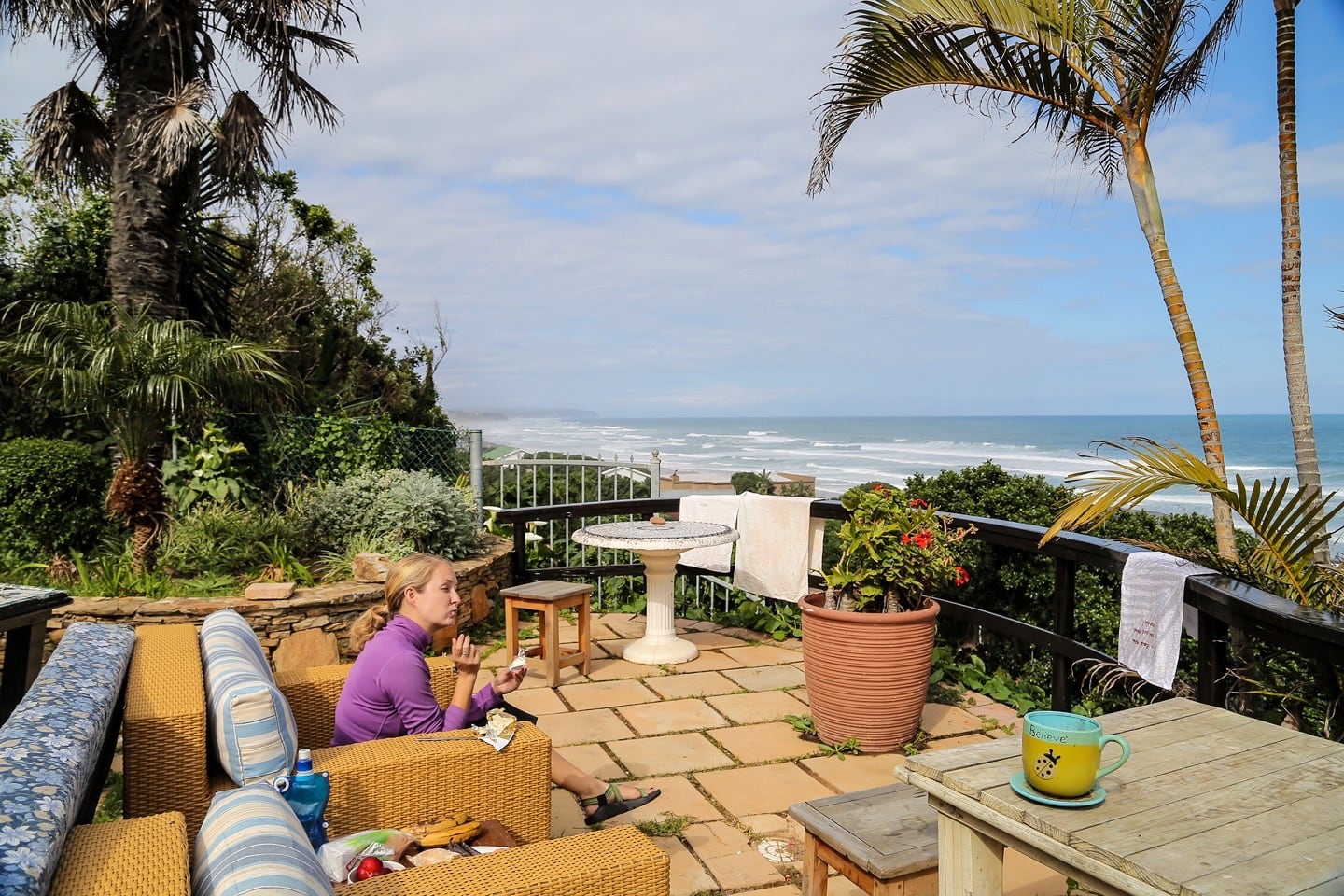 We enjoyed eating our lunch of bleu cheese and crackers, fresh fruit, and Ostrich biltong (jerky) out on their patio with a view. The weather had been a bit nippy, but when the sun came out, it was just about perfect. 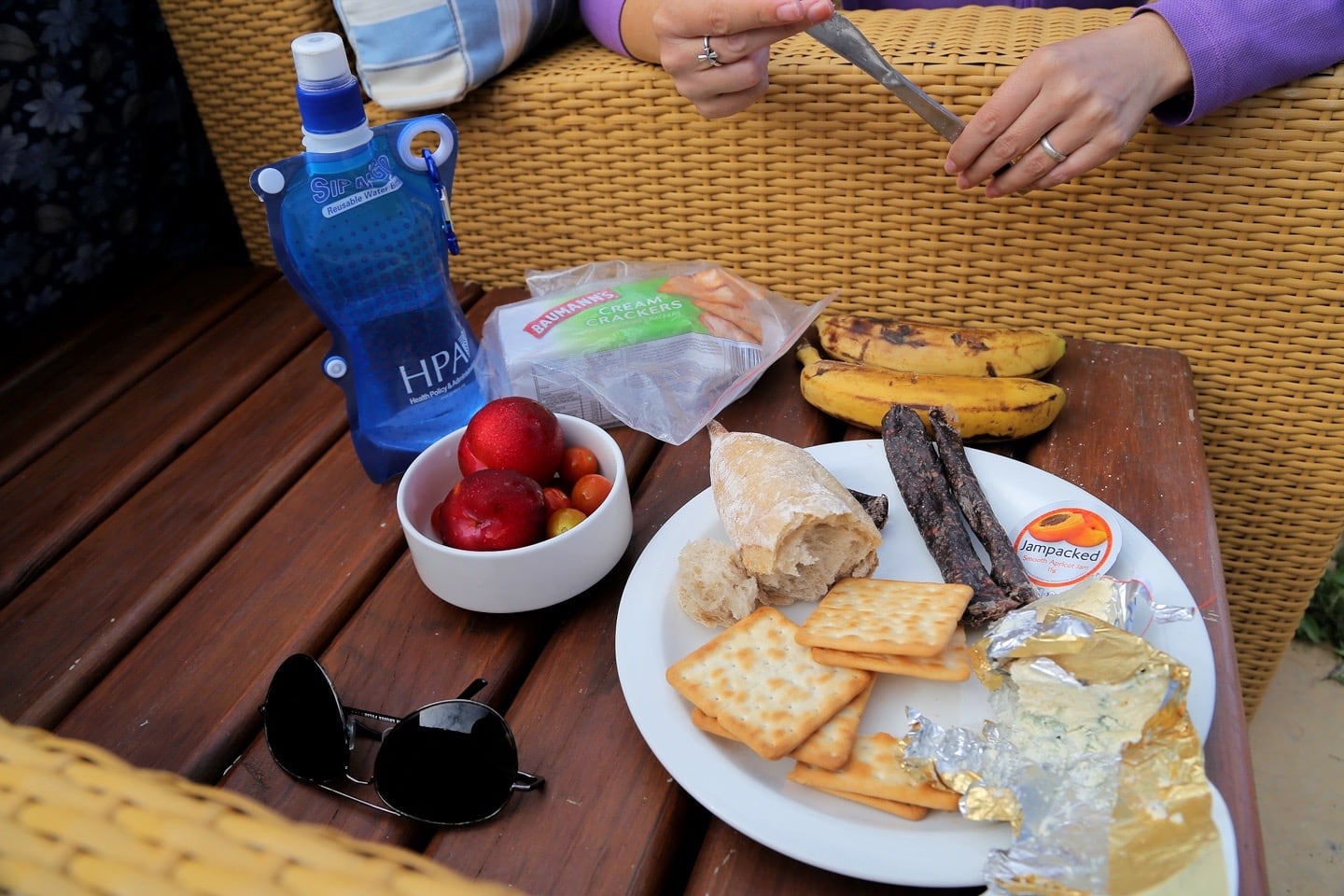 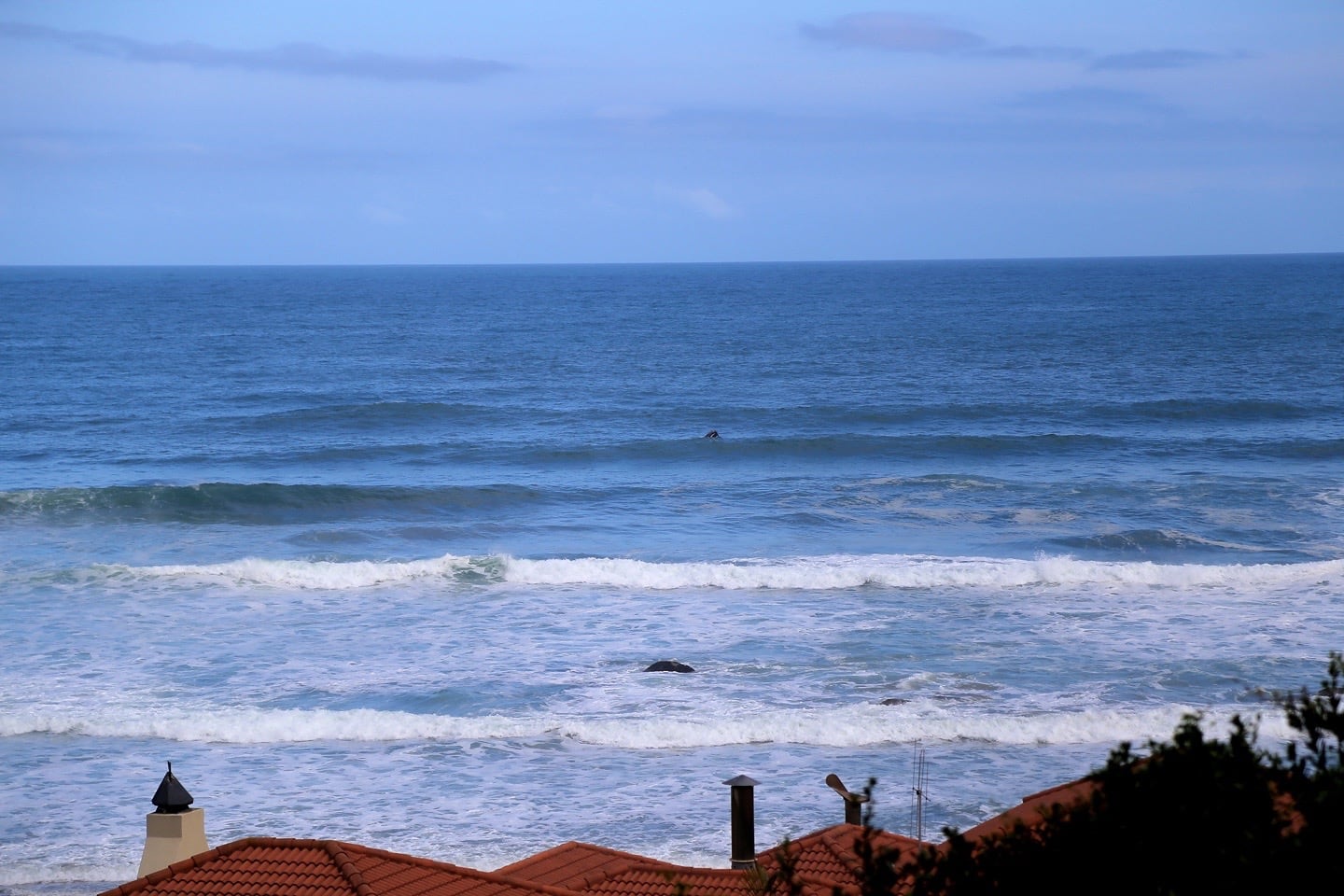 And you could even spot whales this time of year from the comfort of the guesthouse patio! And of course, Wilderness Beach Backpackers was just a short walk from the beautiful strip of sand known as Wilderness Beach. 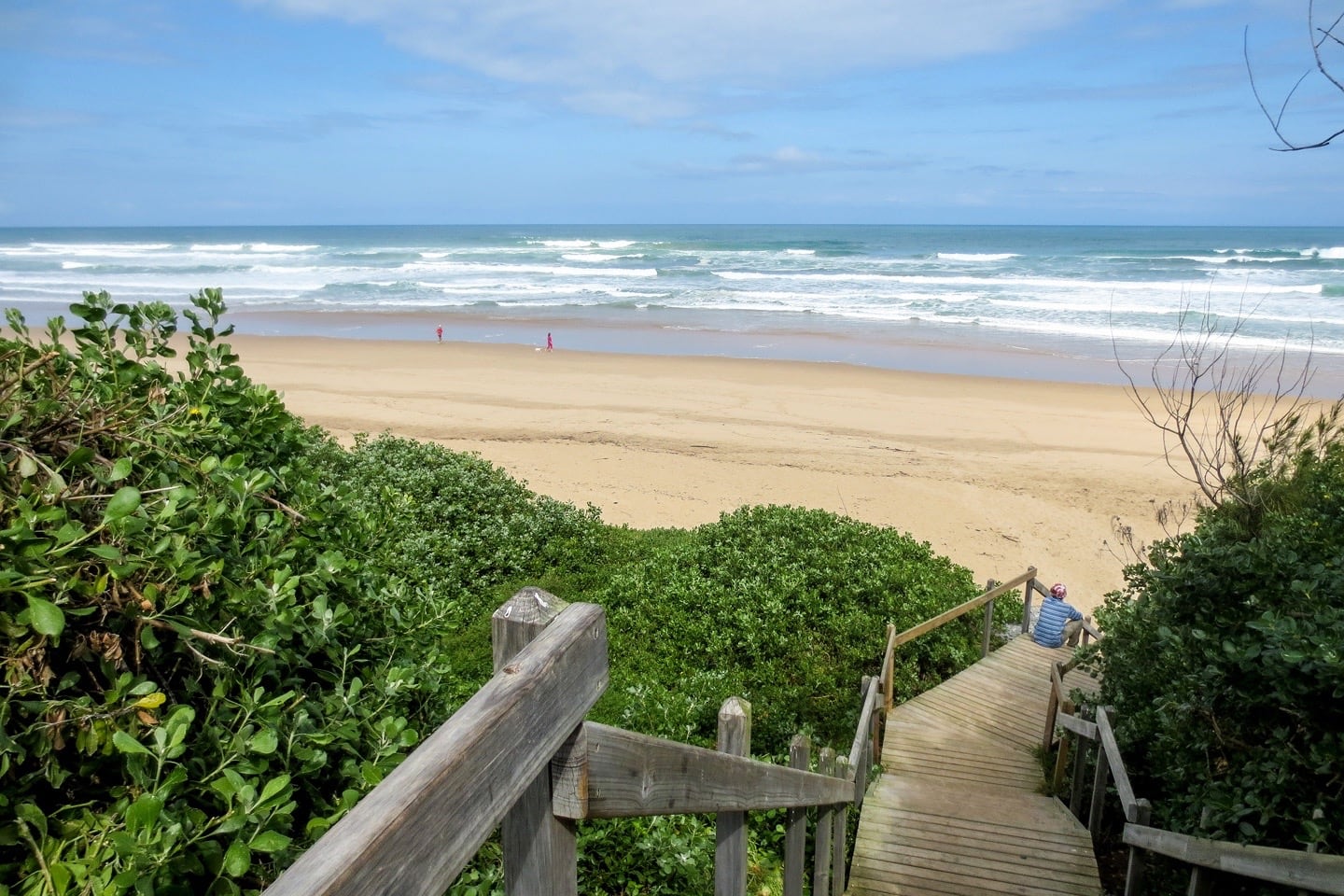 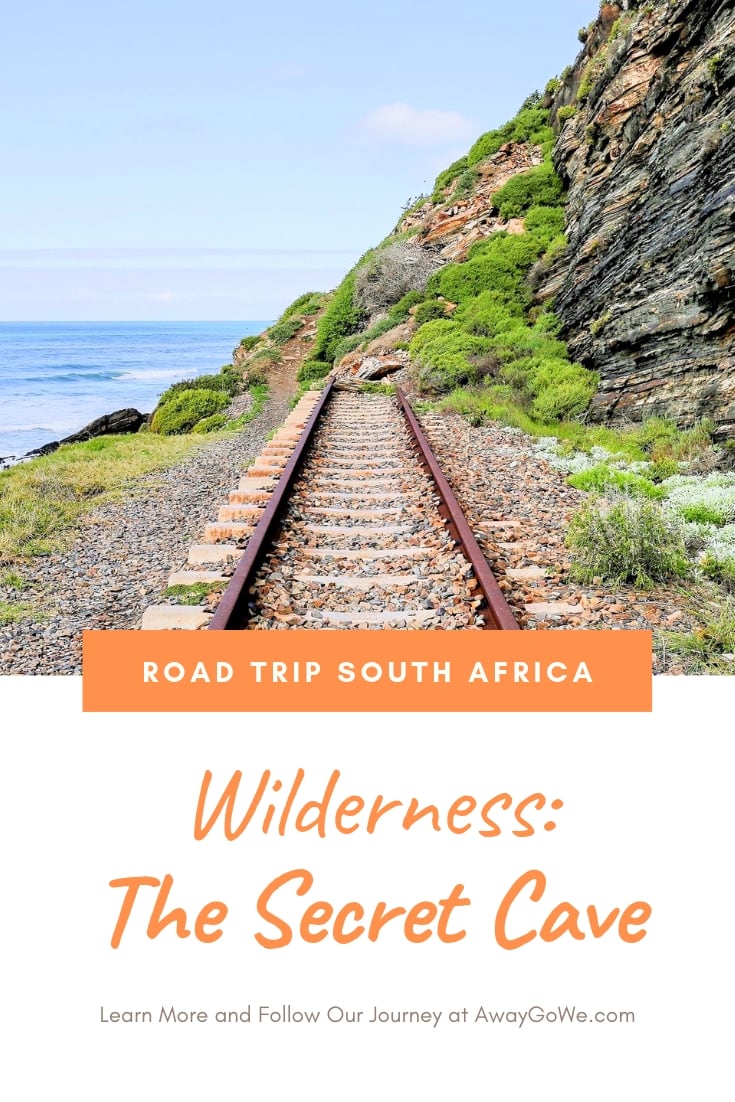