Arriving in Quito was the culmination of a six week journey beginning in Lima and covering some 2,000 miles. We based ourselves in Quito Old Town and were very pleased we did.

Out of all of the places we’ve visited traveling through Peru and Ecuador, we had been told, time and again, how dangerous Quito was, and had also read in various travel guides that it is one of the most dangerous cities in Latin America.

Furthermore, we had been told that under no circumstances should a foreign tourist stay in the Old Town (Ciudad Vieja).

Well, you may have figured out (based on the title of this post alone) that we did go to Quito and did indeed stay in Old Town with absolutely no regrets. This place is amazing. 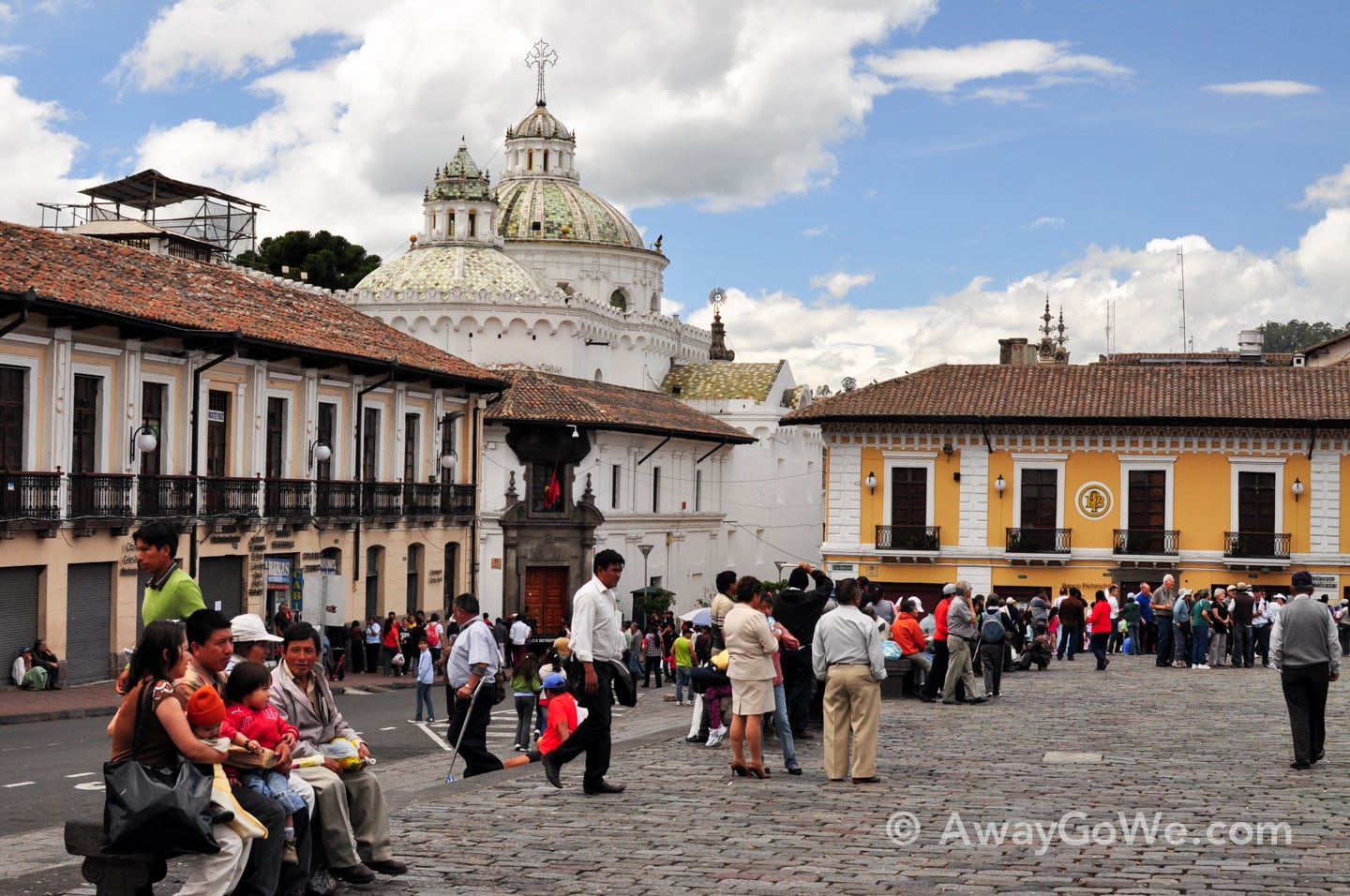 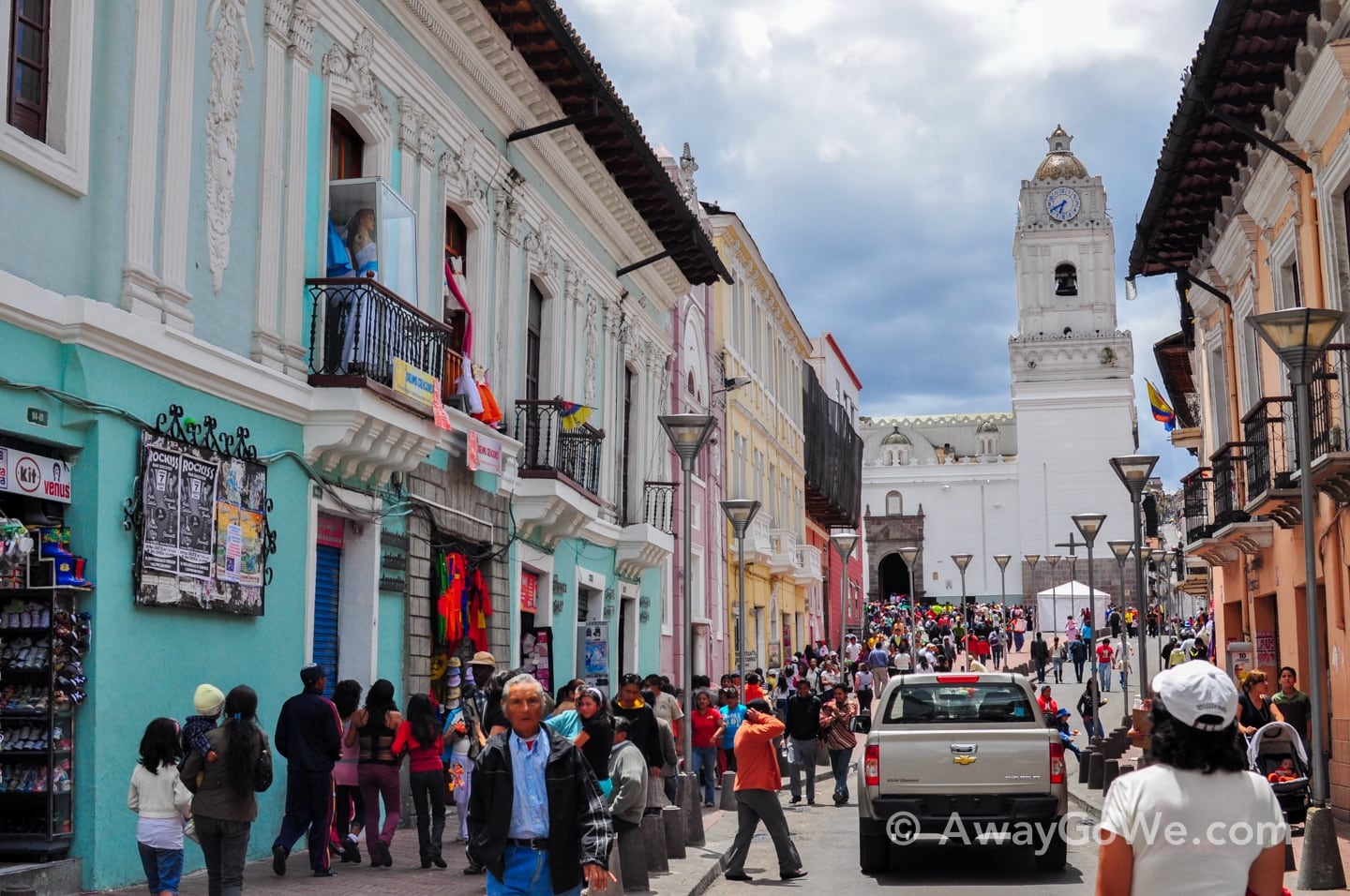 We spent the better part of five days in this awesome city — the first ever historic center in the world to be designated a UNESCO Heritage Site in 1978 — strolling around after dark in the Old Town and venturing places few foreign visitors dare to go.

Of course, we kept our wits about us and didn’t do anything stupid, like drinking ourselves silly before getting into a car with a group of smooth-talking Latin men drenched in cheap cologne. 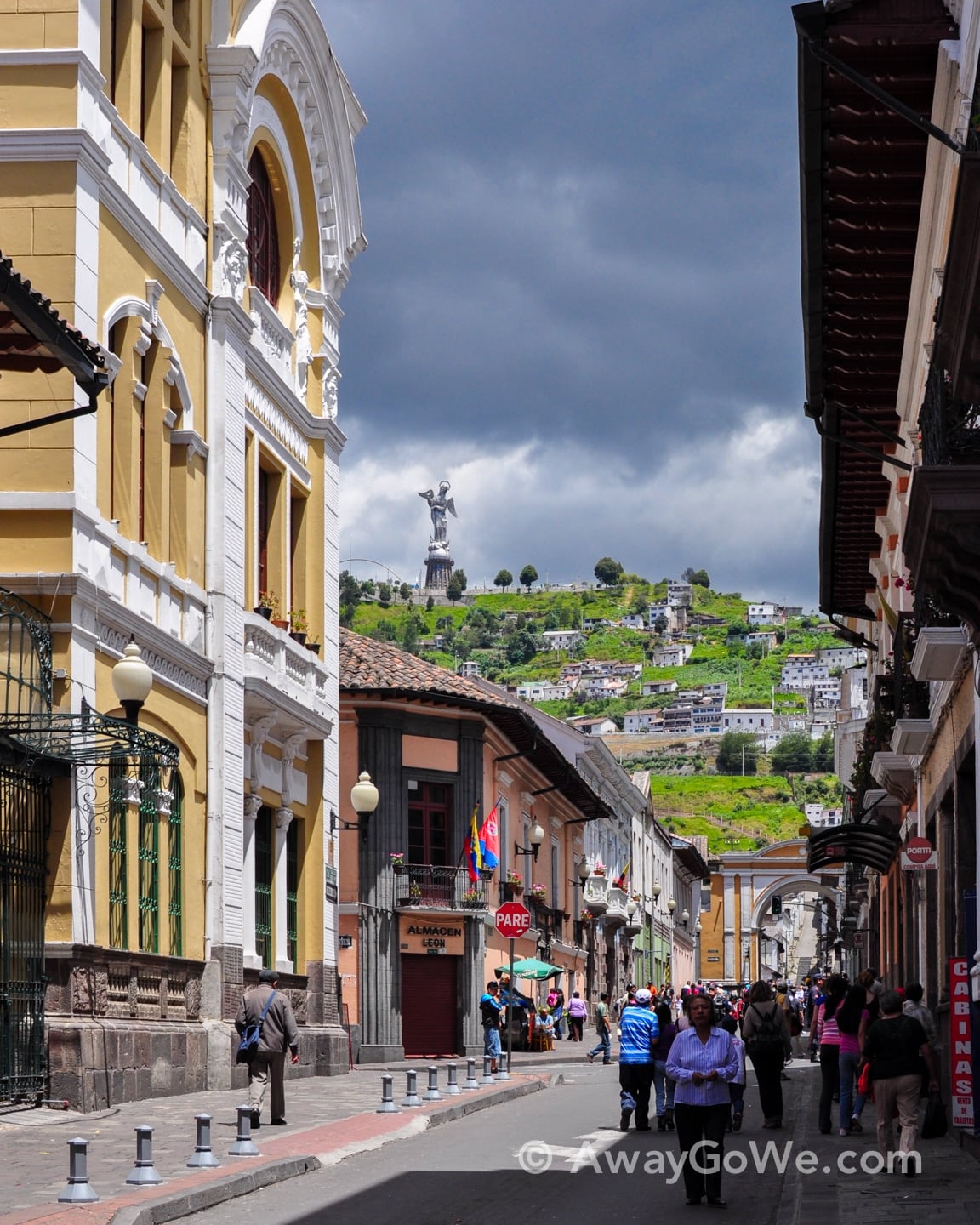 Due to the warnings and advisories, we did find ourselves a bit on edge upon arrival in Quito, which is why you won’t see any pics of that first night (the camera remained stowed in a bag of dirty clothes back at the guesthouse).

It also didn’t help matters that, within minutes of arriving in Old Town [after dark], we encountered a sea of passionate individuals waving flags and singing patriotic hymns — exactly the type of gathering that the U.S. Department of State frequently advises travelers to avoid.

And these gatherings were everywhere, unavoidable, and oh so menacing — with the children and their tamales, the hundreds of flower-decked window sills and bright banners, and the Ricky Martin music…so much Ricky Martin.

So, we were caught a little off guard that first night. Hordes of people moving up and down the streets, live music, police all around…what on Earth was going on? We checked in to our guesthouse, dropped off our backpacks and headed right back out into the dimly lit streets. The mood was lively and there was a palpable electricity in the air. What the heck, right?

And then, a smiling woman handed us a pamphlet of highly subversive information key to unlocking the mystery unfolding all around us. Inside, the pamphlet contained a map…and a schedule of events.

It was Quito’s Bicentennial Independence Day, of course!

Quito’s Bicentennial, I say, not Ecuador’s. Apparently, Quito has its own special day in which Ecuadorians mark the beginning of the struggle for independence from Spain, which began in Quito.

And there were elaborate sound stages all over the Old Town with free music of every genre, for young and old, hip and traditional, and the food (oh the TAMALES!!!), and entertainers and the ALCOHOL.

Um. Actually, scratch that. No alcohol. It was banned during the festivities.

We learned this the hard way on our first night in Quito by going into a swanky looking bar off one of the main plazas and trying to order a beer.

“No vino. No vino, no cerveza, No alcohol. NADA, señores.”

Because of the festivities. Mmm. Ok.

About 15 minutes later, we were walking down a street and noticed a large number of people disappearing down a long corridor. We followed them–naturally–and at the end of the corridor?

A large courtyard packed with people. Eerily reminiscent of Oktoberfest with picnic tables, the smell of festival food cooking, and live music. But there was food and music out on every street corner, why all of the people in here?

And then we saw it: the long line.

And at the end of the long line?

A huge vat, full of bubbly, boiling something-or-other, being dolled out in ladlefuls to the faithful pilgrims. We asked someone in line what it was that they were serving.

We had read about Canelazo. Hot, spiked, cider made in small batches. Delicious. And just what the doctor ordered for such a night. We enjoyed our paper cups of delicious contraband in the festive surroundings of our hidden courtyard and ventured back out into the greater festivities on the outside.

We did make it back to our guesthouse, after midnight but before curfew, tired, but feeling pretty good about Latin America’s most dangerous city ever. 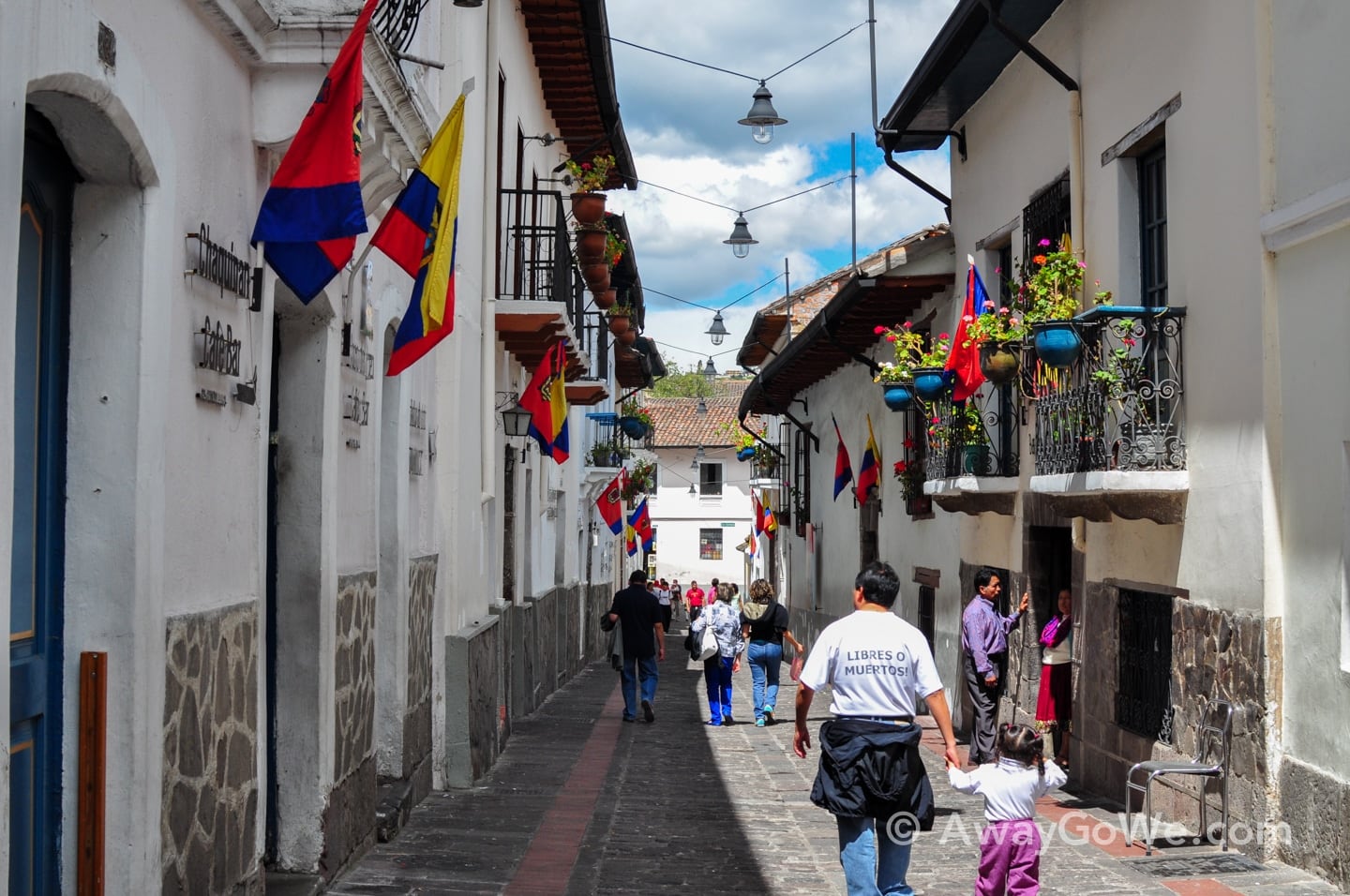 We awoke the next morning a bit later than usual and spent our first full day in Quito exploring Old Town.

We’ve never, ever regretted staying in the Old Town for one bit, especially after we took a trip up to the Mariscal Sucre where the English-speaking tourists generally stay. What an awful, awful place. Party Central, completely devoid of the character that makes Quito, Quito, and full of, well, foreign tourists!

We didn’t come however-many-thousands-of-miles to Ecuador to spend all of our time around people just like us. We came to visit Ecuador! And the Mariscal Sucre is neither Quito nor Ecuador.

Anyway, we had a great time exploring the endless treasure-trove that is Old Town – historic buildings, cobblestone streets, pleasant plazas, locals at work and at play. Lovely. 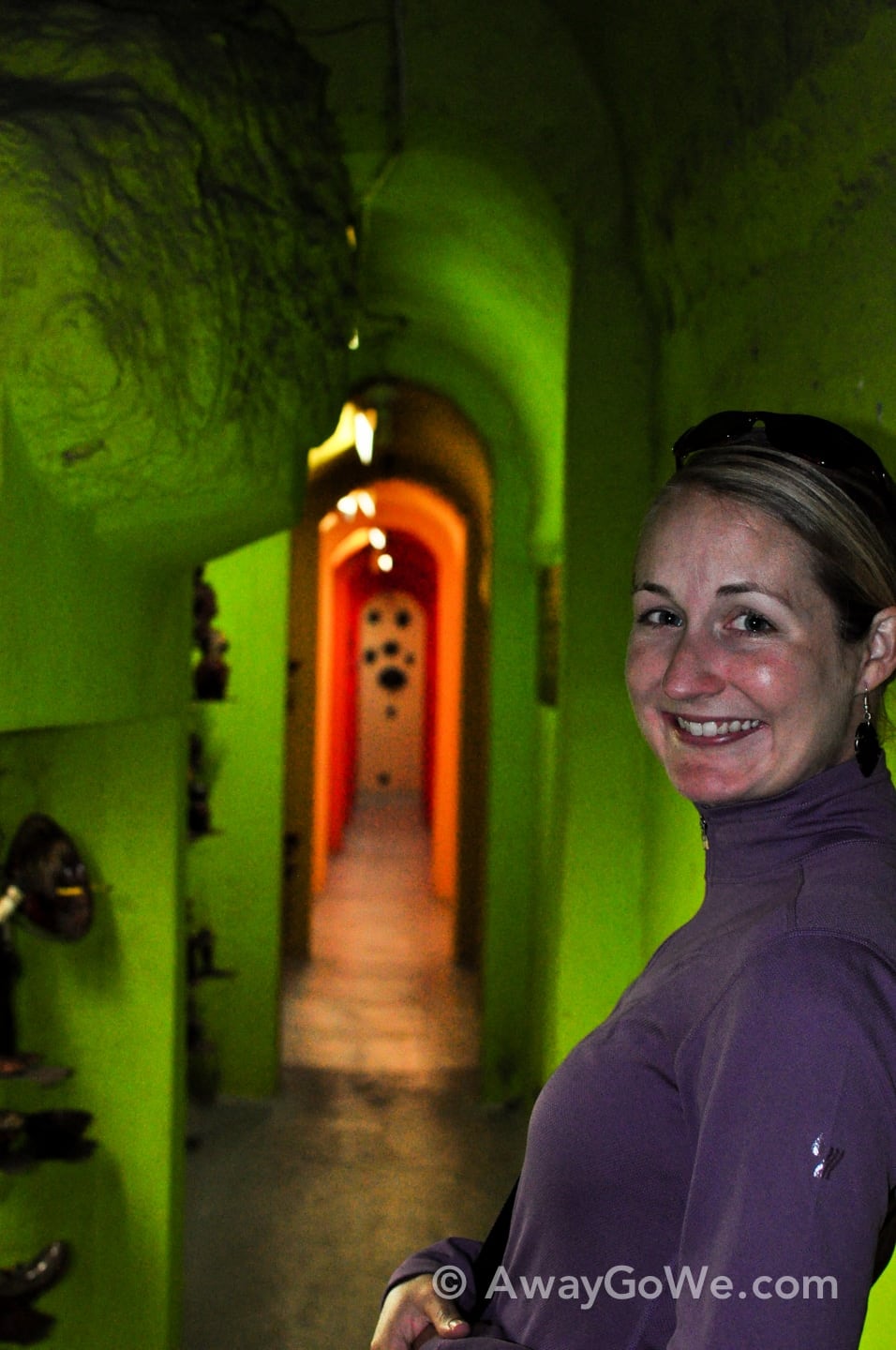 We poked into a unique Museum-Shop, as it was called. Too rich for our budget, but fun to browse, given the neon-colored walls of interesting artwork. 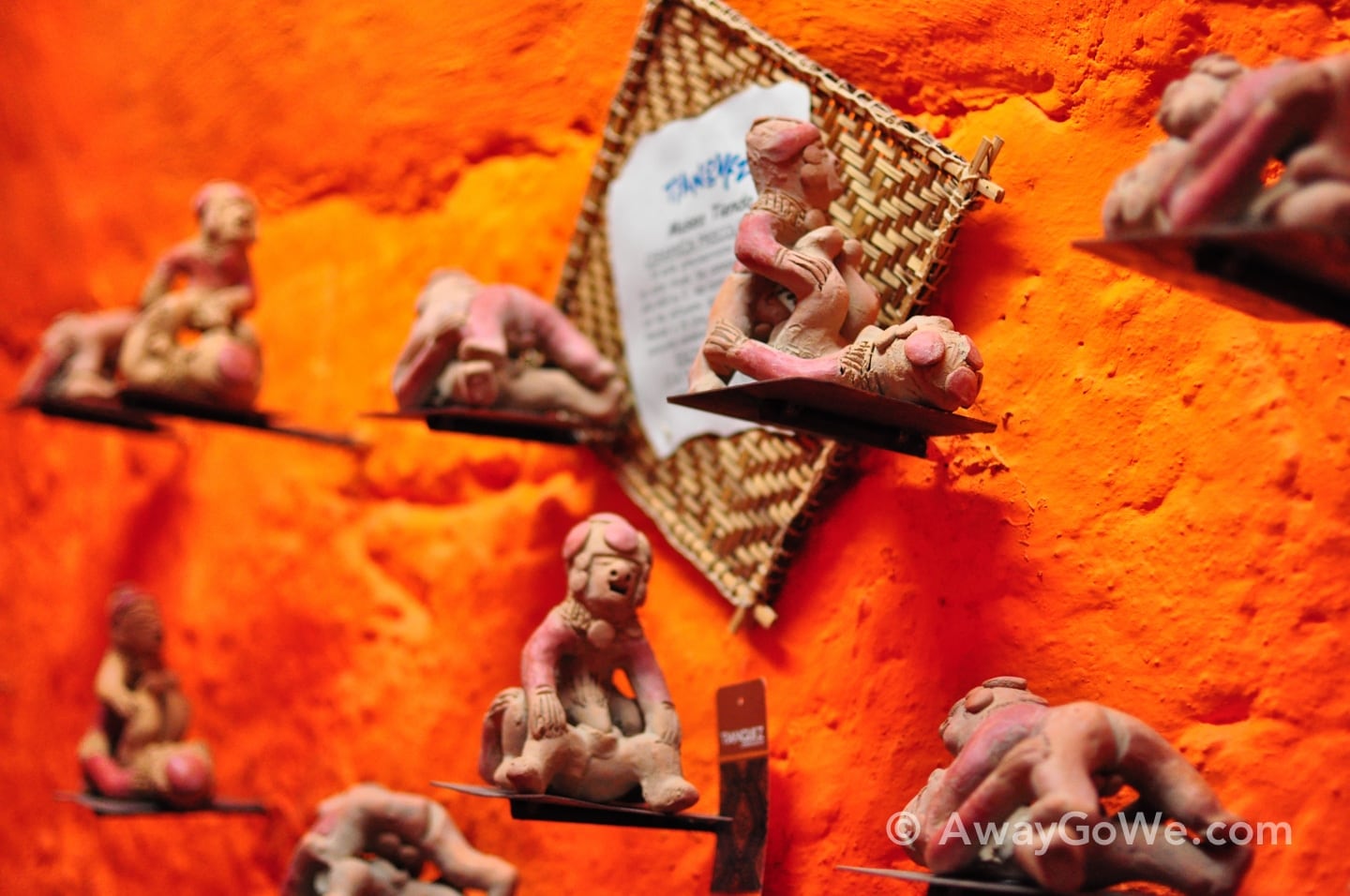 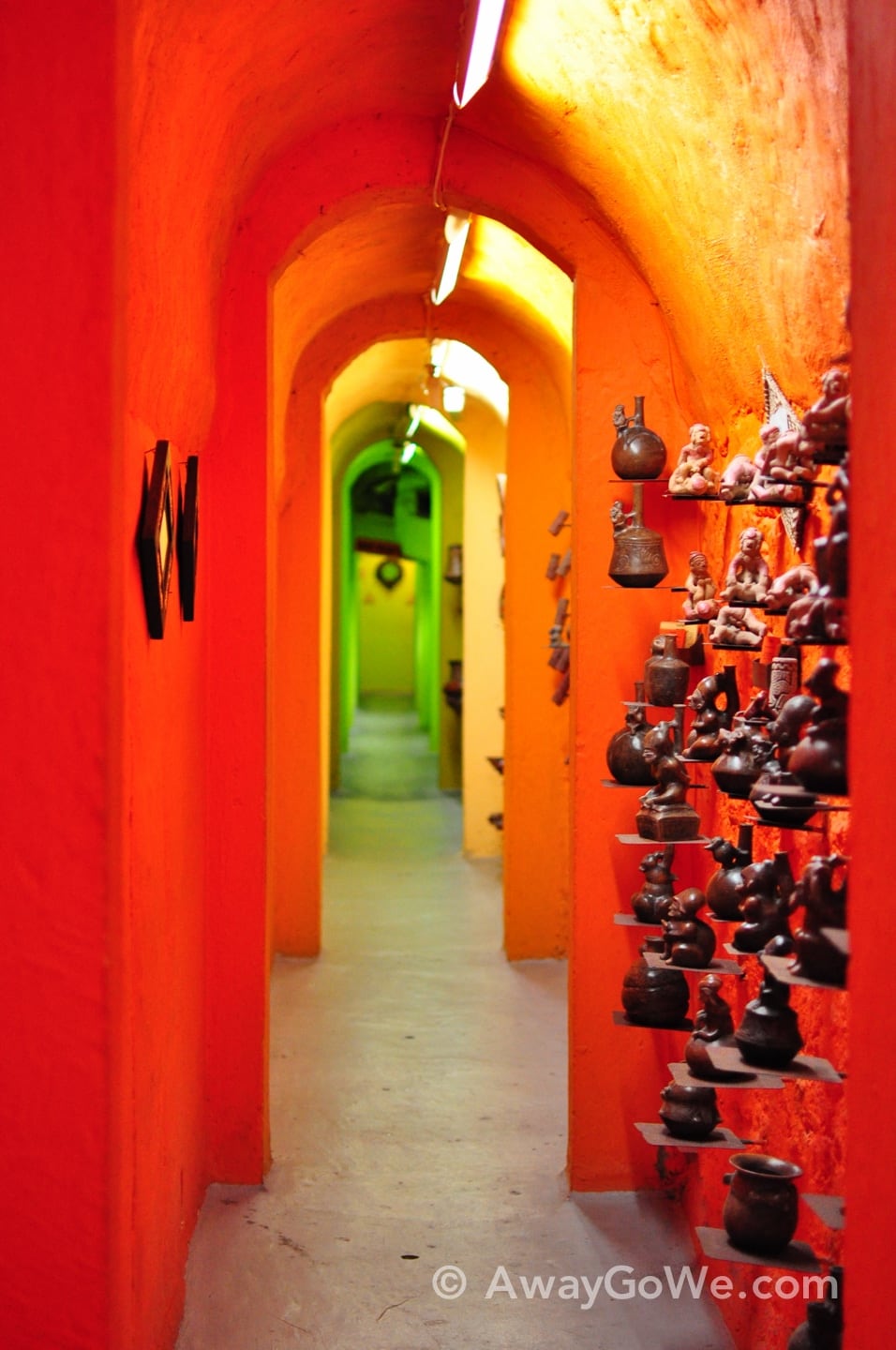 It doesn’t happen very often where Lori and I have to worry about hitting our heads coming through a doorway (height is not one of our fortes, so to speak), but in Ecuador, apparently anything is possible. 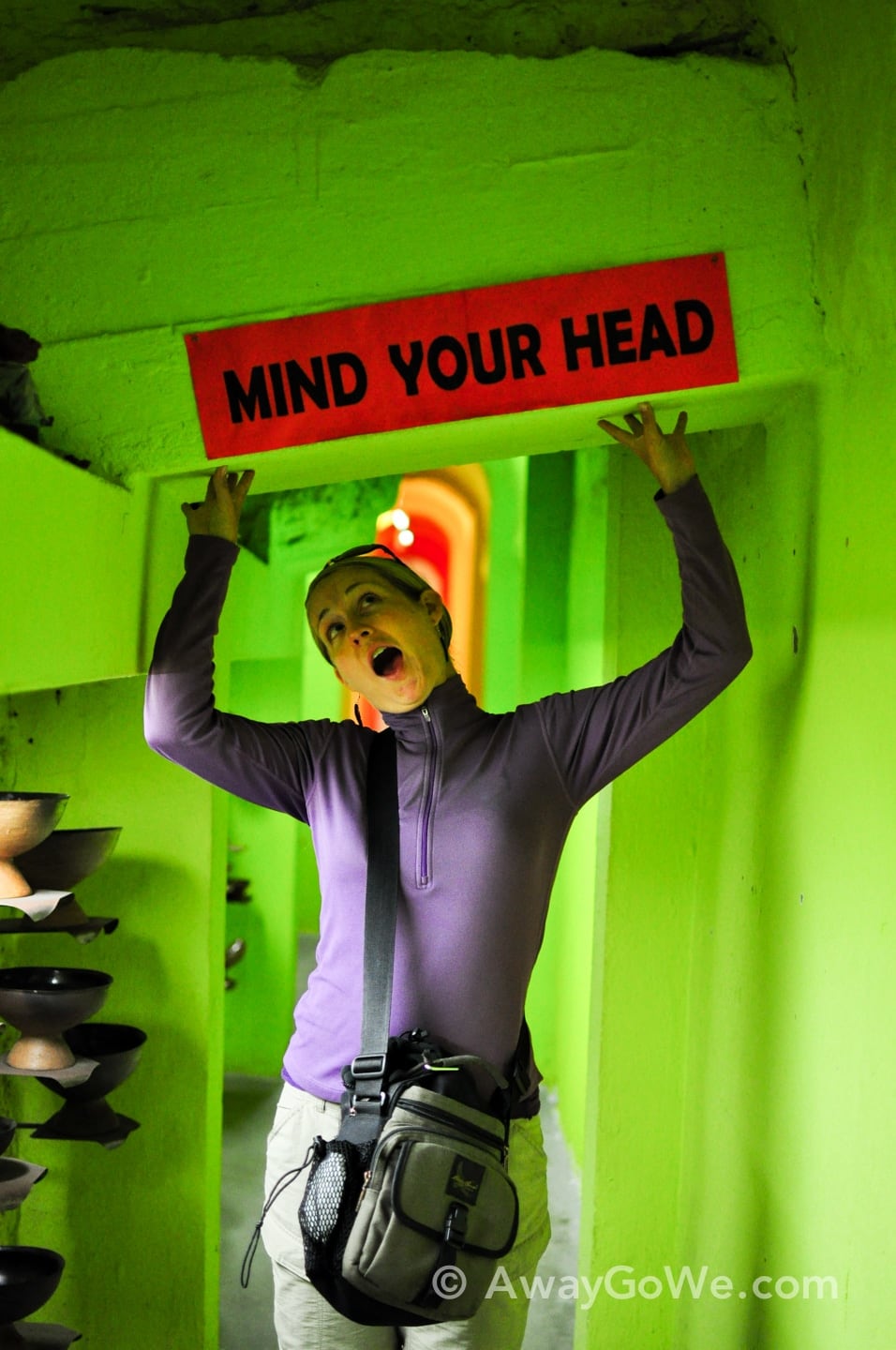 The festivities continued into the next couple of days with more music and events around Old Town. 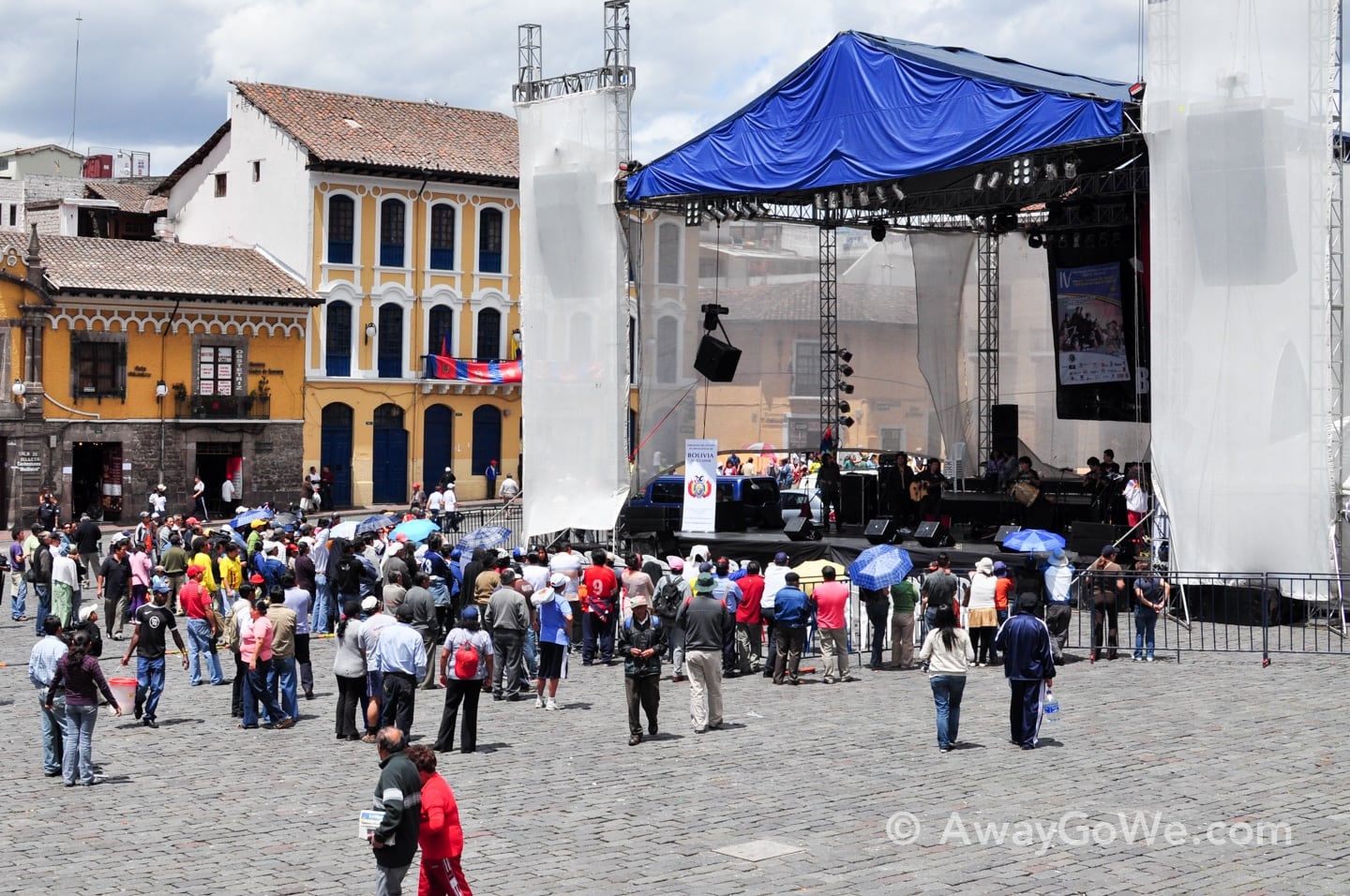 And with any sort of festival in Latin America, the masses made a point to seek out the various churches and cathedrals around town for worship and pilgrimage. 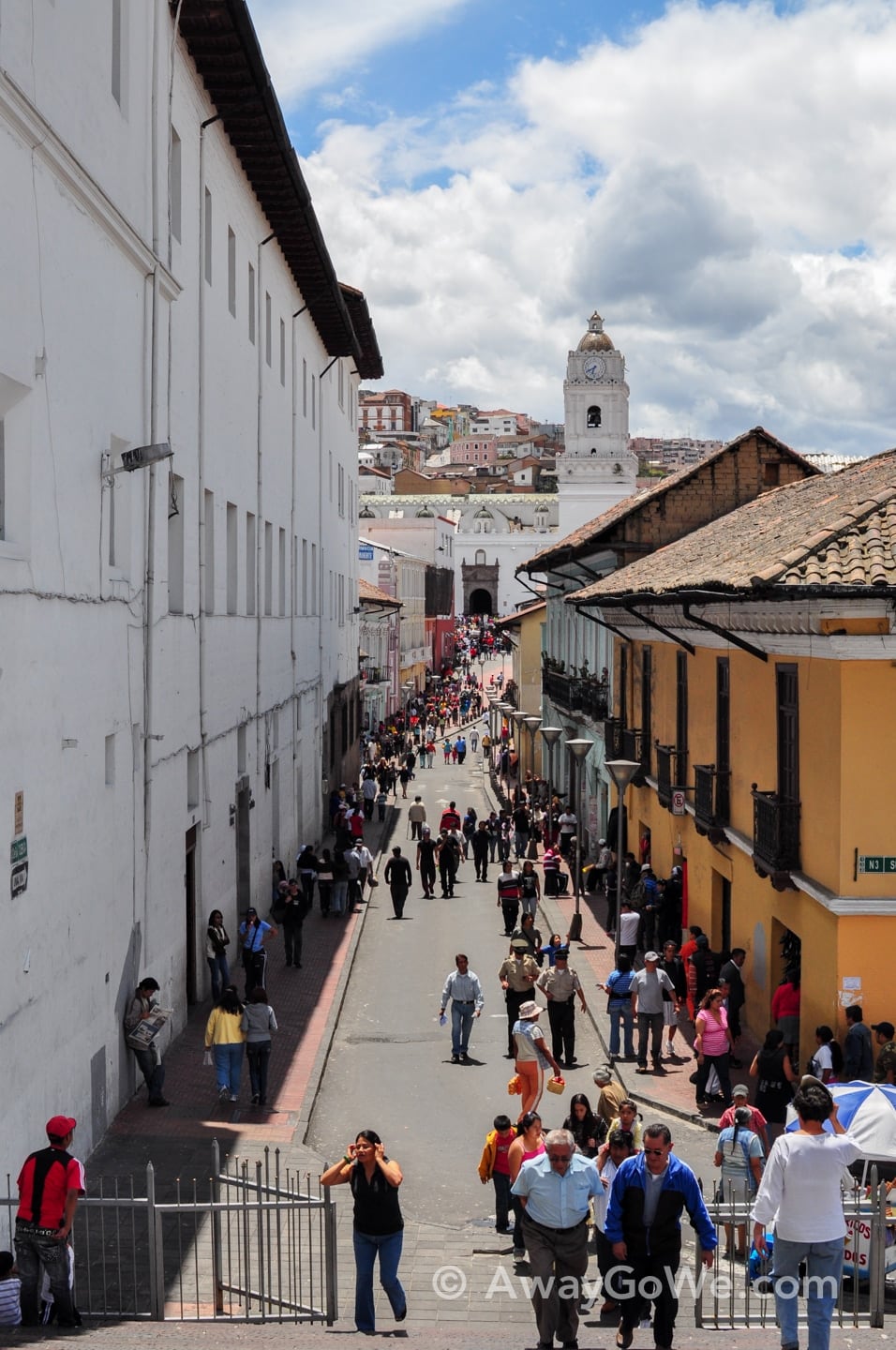 This particular church stood out among those we visited for its unique altar…or image of an altar printed on an enormous sheet hanging where the altar presumably would be…if it weren’t covered by a ginormous printed sheet depicting an altar. 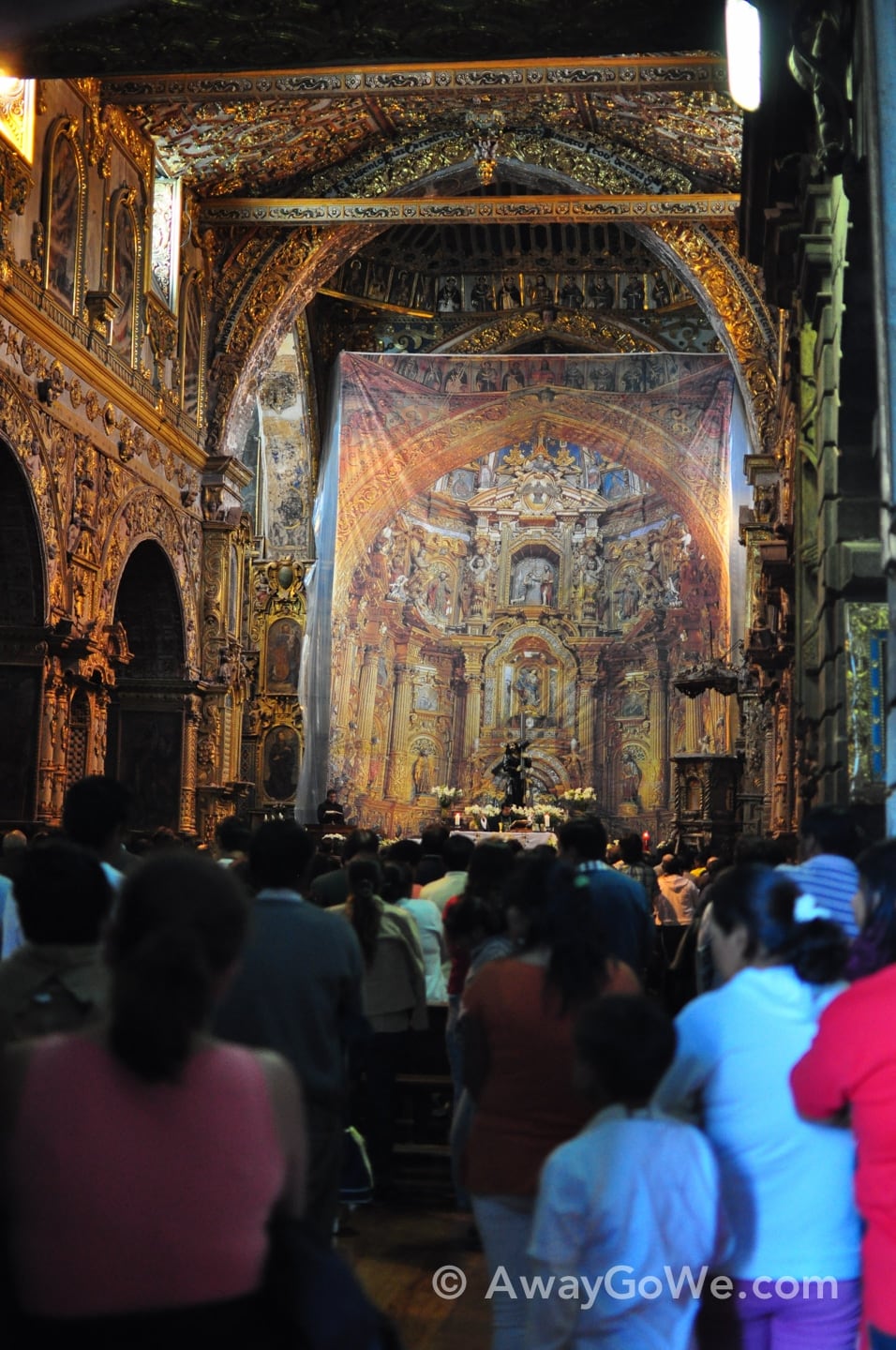 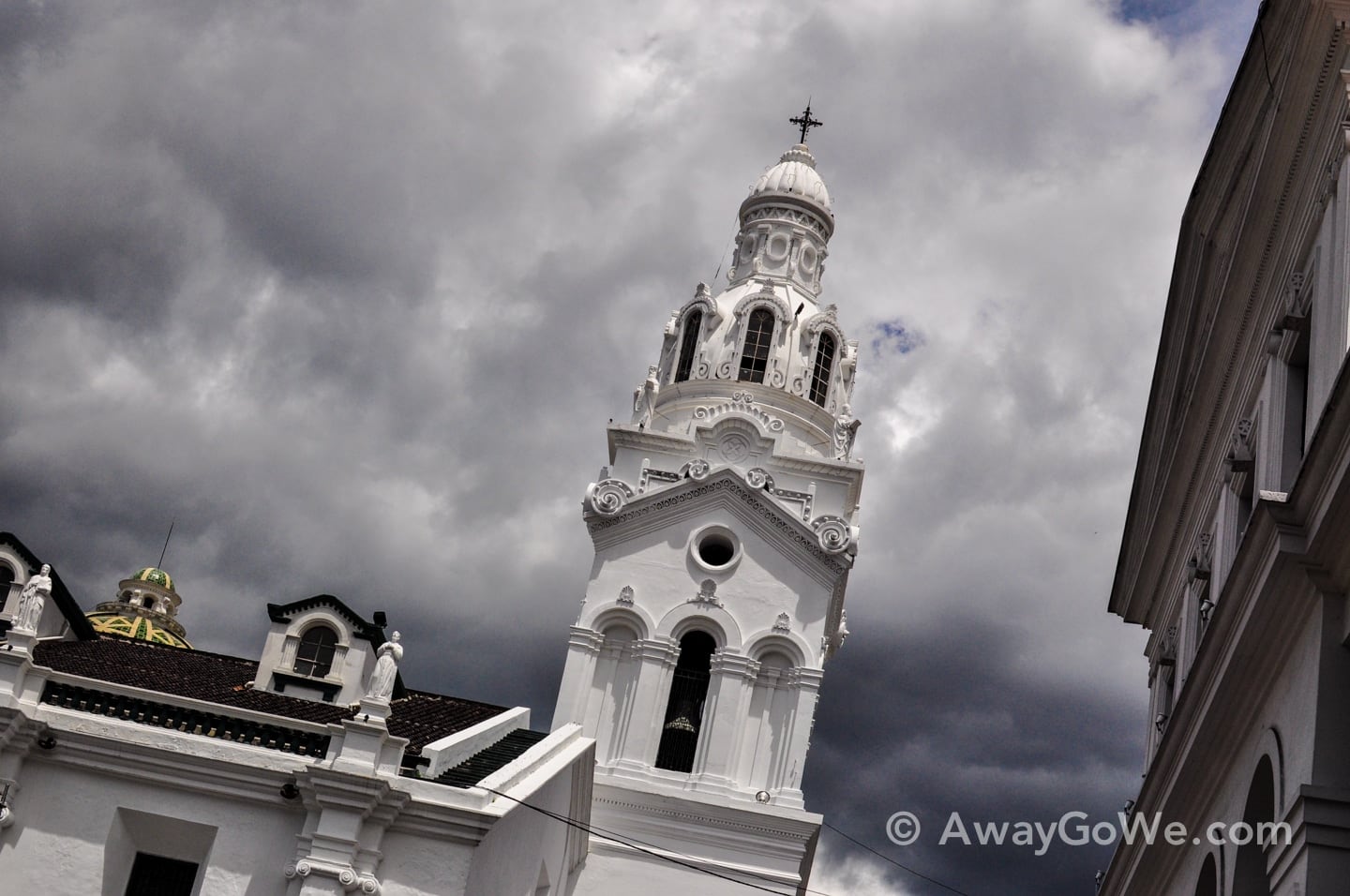 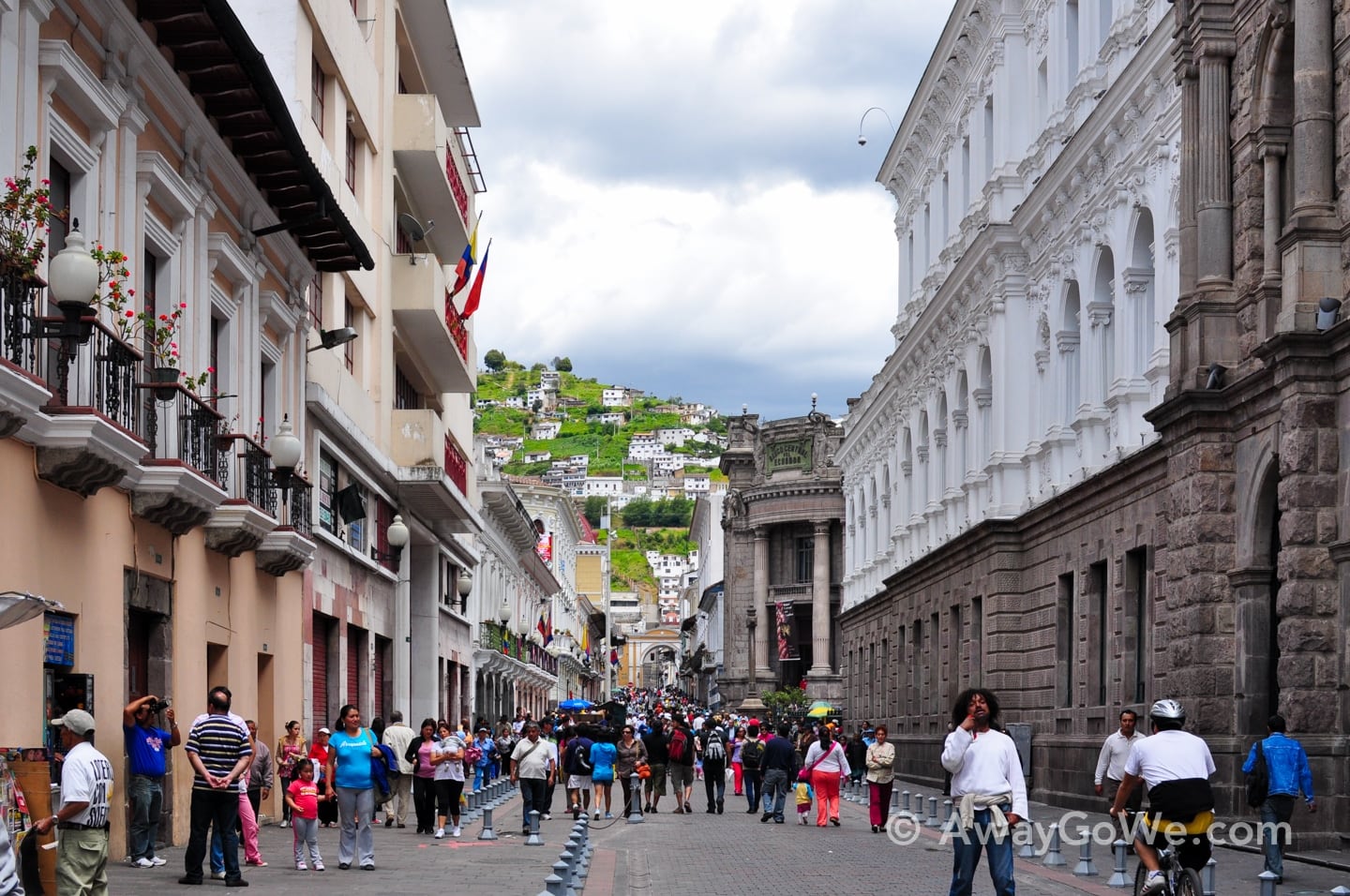 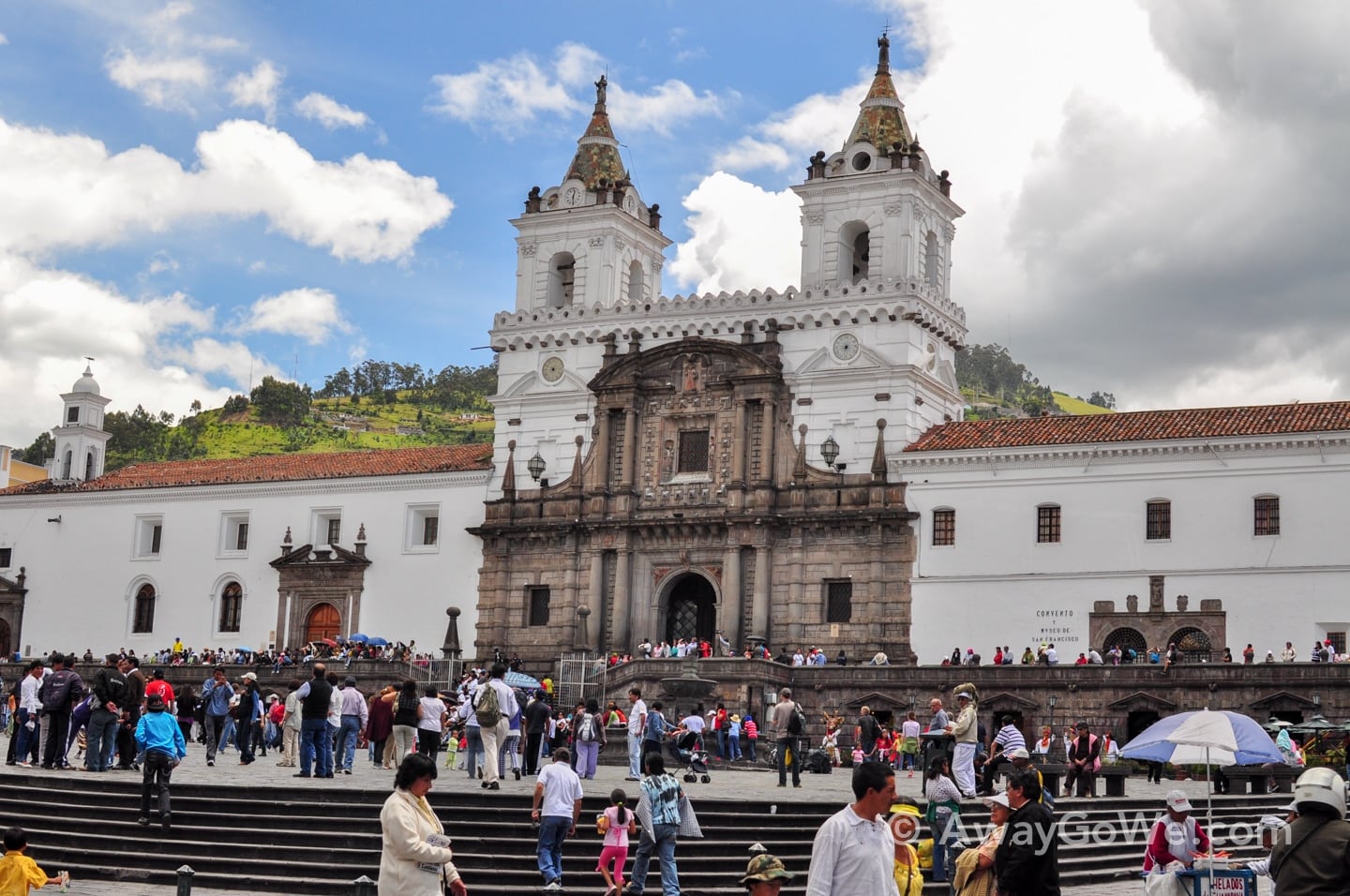 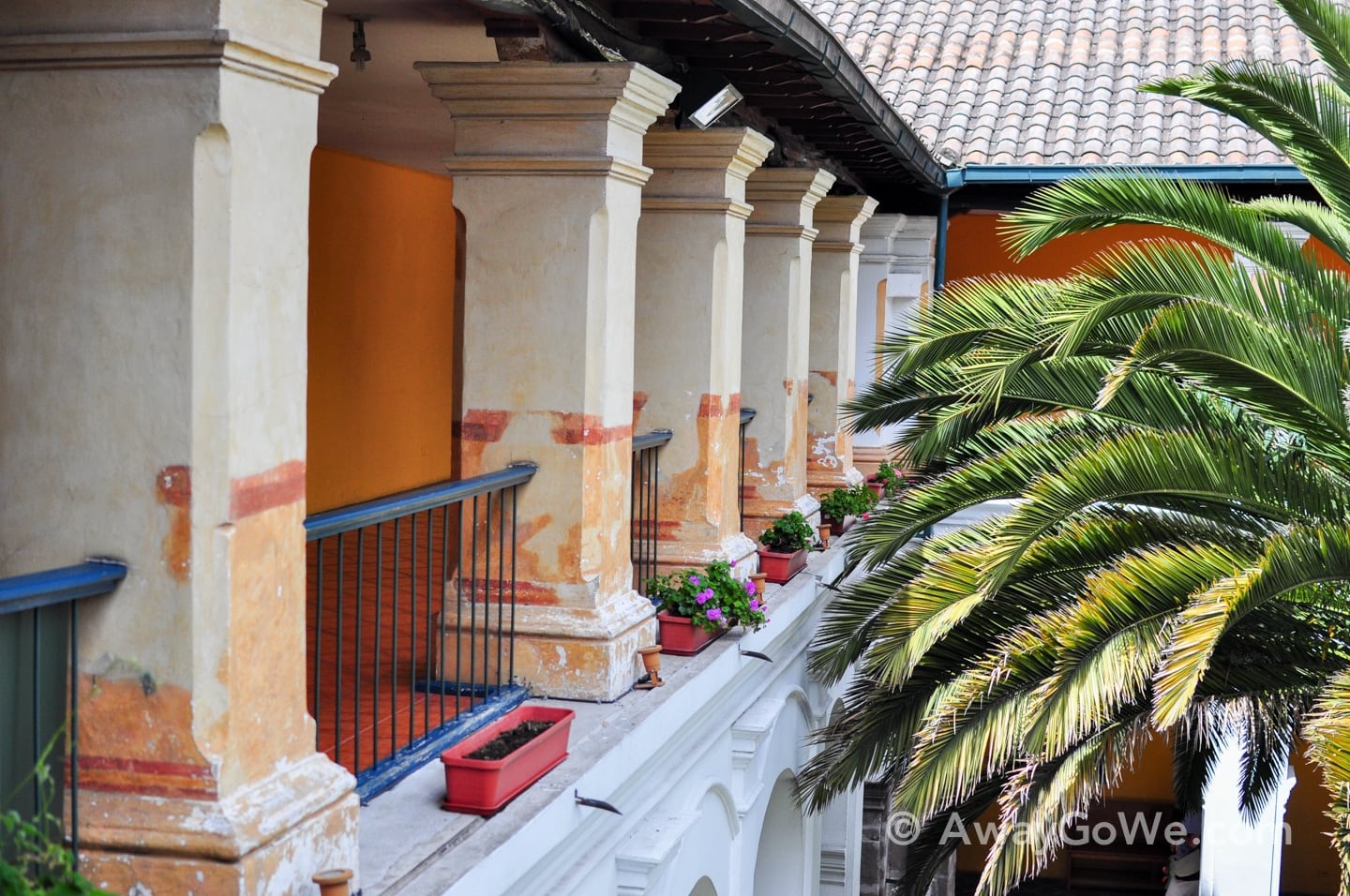 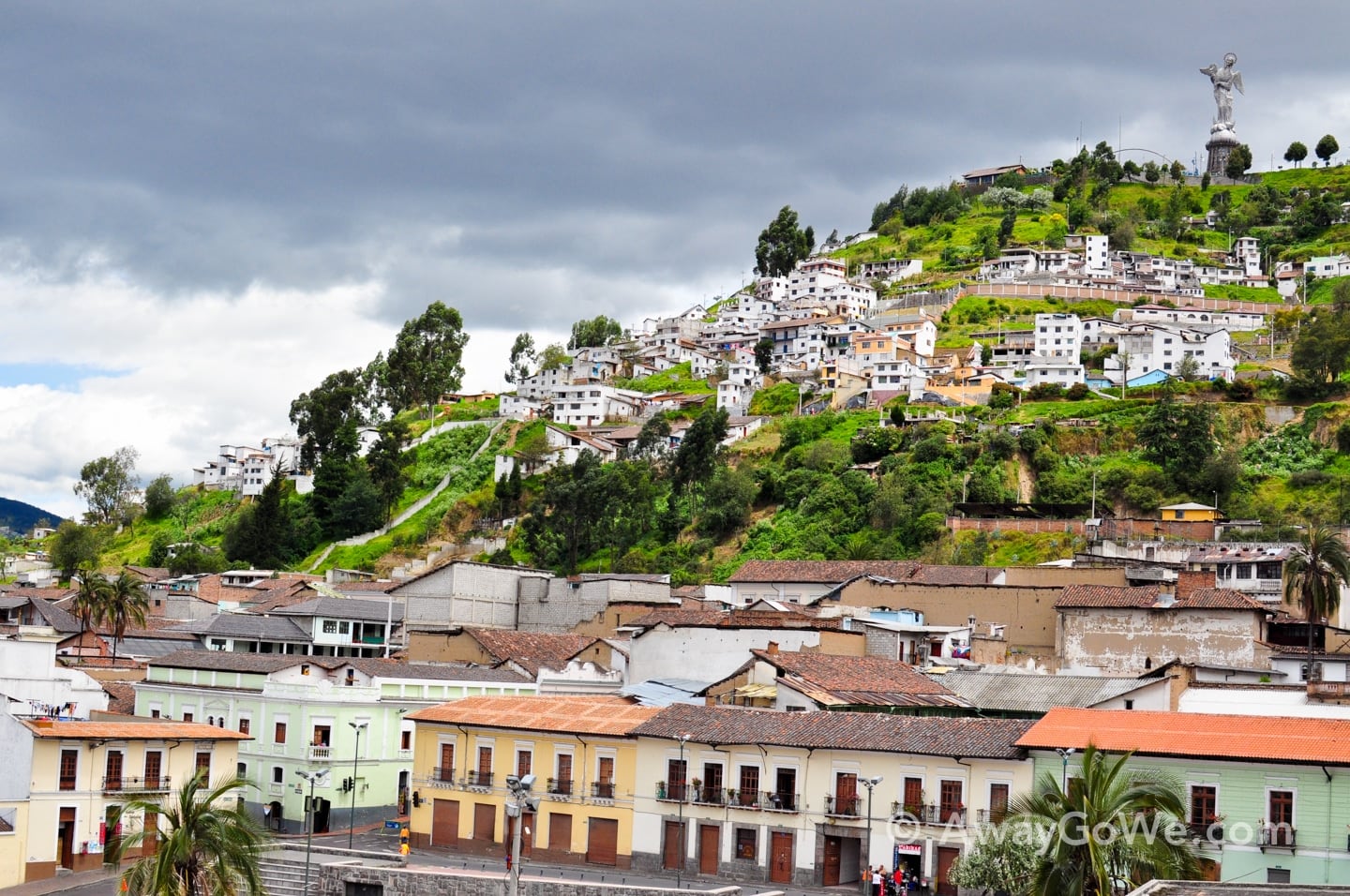 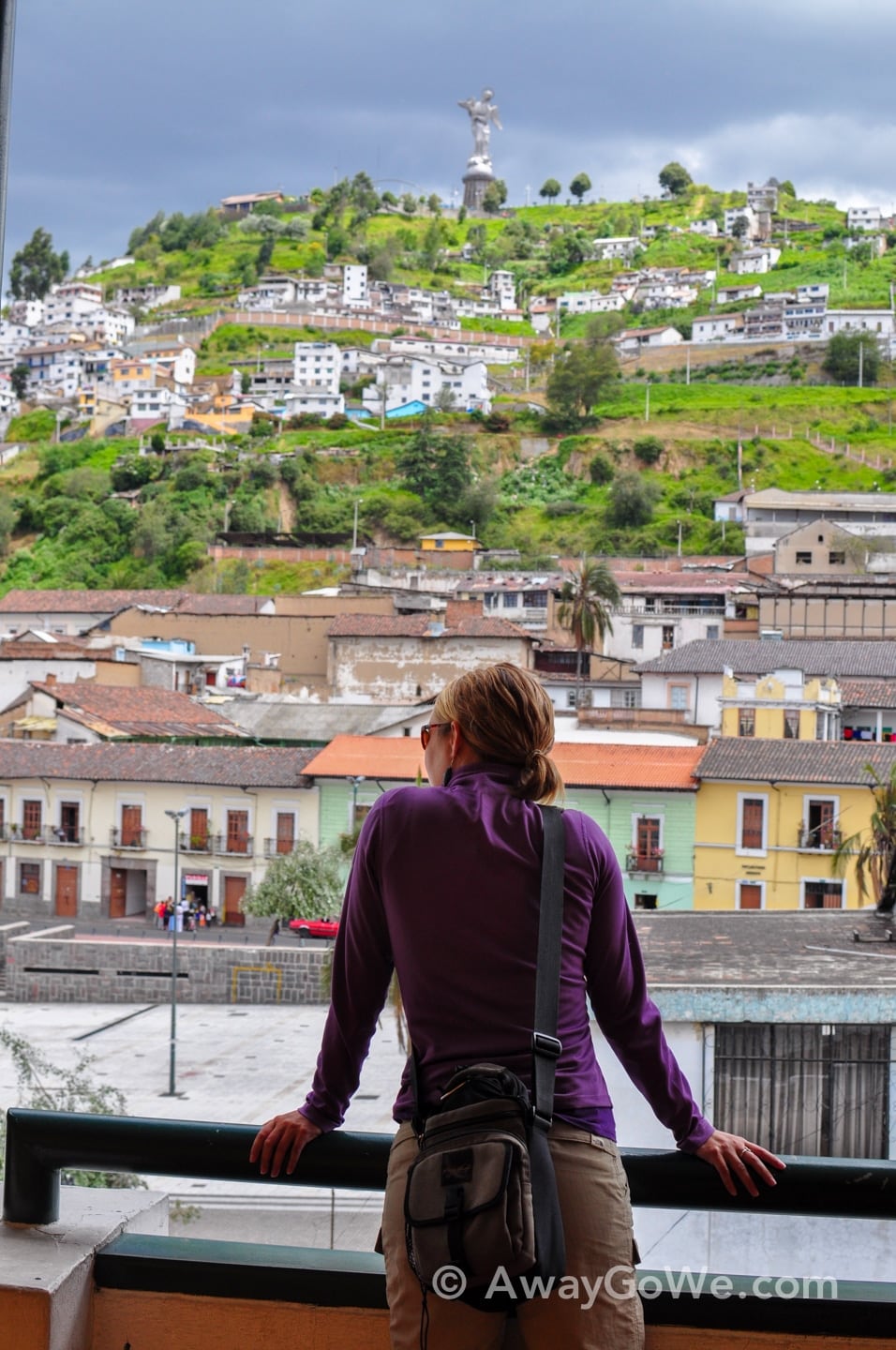 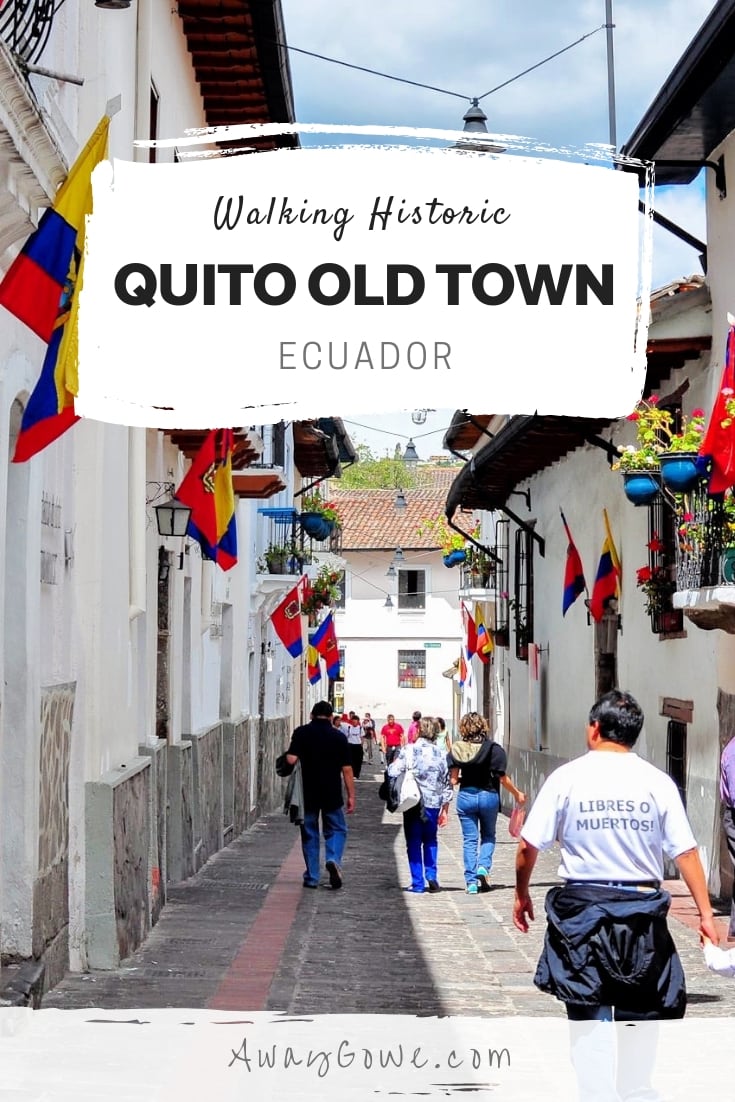