Visiting Penang Hill (Bukit Bendera) makes a fun and easy day trip from Old Town Georgetown, even with little ones.

There’s much more to see and do on the hill than what today’s nap schedule allowed for, but we still felt the journey from sea level to 2,700 feet (820 m) was worth it, even for just a few hours.

Penang Hill is located just five miles west of Georgetown, yet it might as well be five hundred miles. Up here, it’s a whole other world.

So how does one get from sea level to 2,700 feet in a matter of miles and minutes? 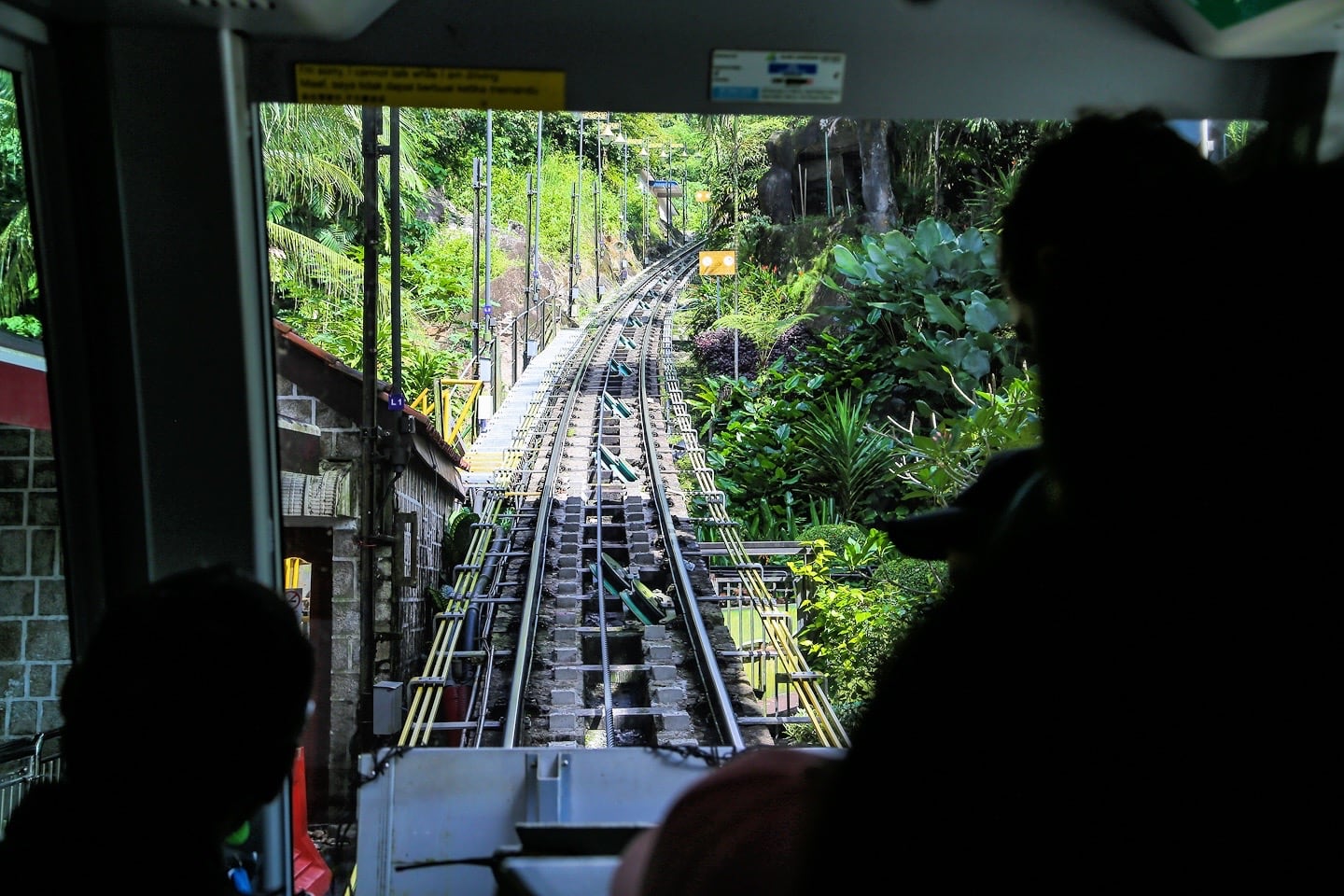 Straight up the hillside!

From the Georgetown Jetty, the Penang Hill Lower Station is easily accessible by RapidPenang Bus #204, which takes about an hour each way.

However, we decided to make things a bit easier on ourselves with the boys and take a Grab. Knowing that the trip took around 30 minutes and covered five miles, I was initially concerned it might take some time to find a Grab driver to take us. But no. Less than a minute after I made the request through the app we had a driver waiting outside our townhouse. And the cost? 11 RM each way (US$2.50).

We purchased standard tickets and didn’t have to wait long midweek in early October. We’ve been told, however, that queues can be brutal on the weekends any time of year.

The ride only takes a few minutes each way. If you’re keen on hiking around the hill, there are special Local trains that will drop you off at the various stations in between Lower and Upper station. All other trains are express (i.e. make no stops). 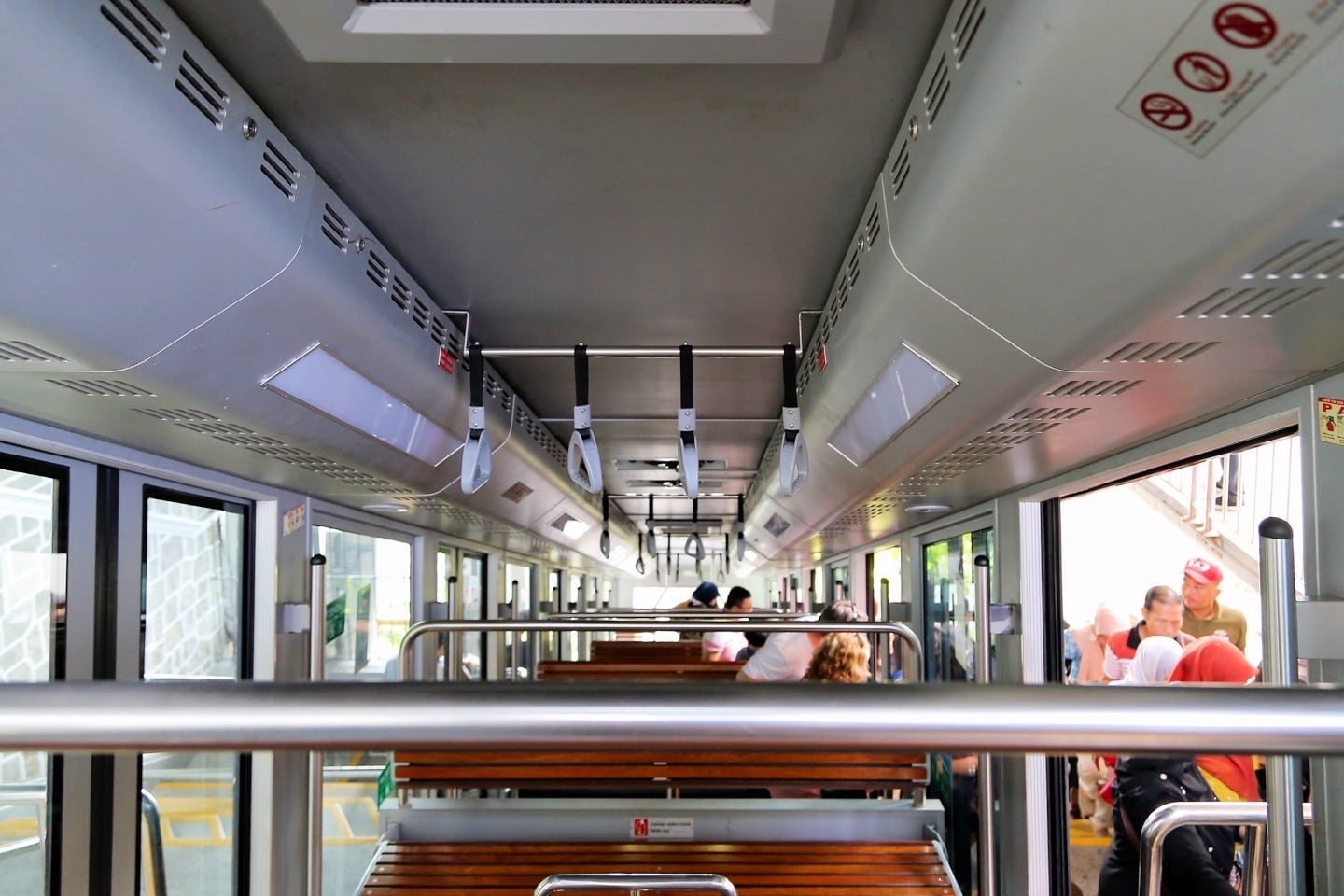 Inside view of one of the trains, looking downhill. We were advised to try to get on the front of the train for the best view, which we did and would definitely advise others to do the same if possible. 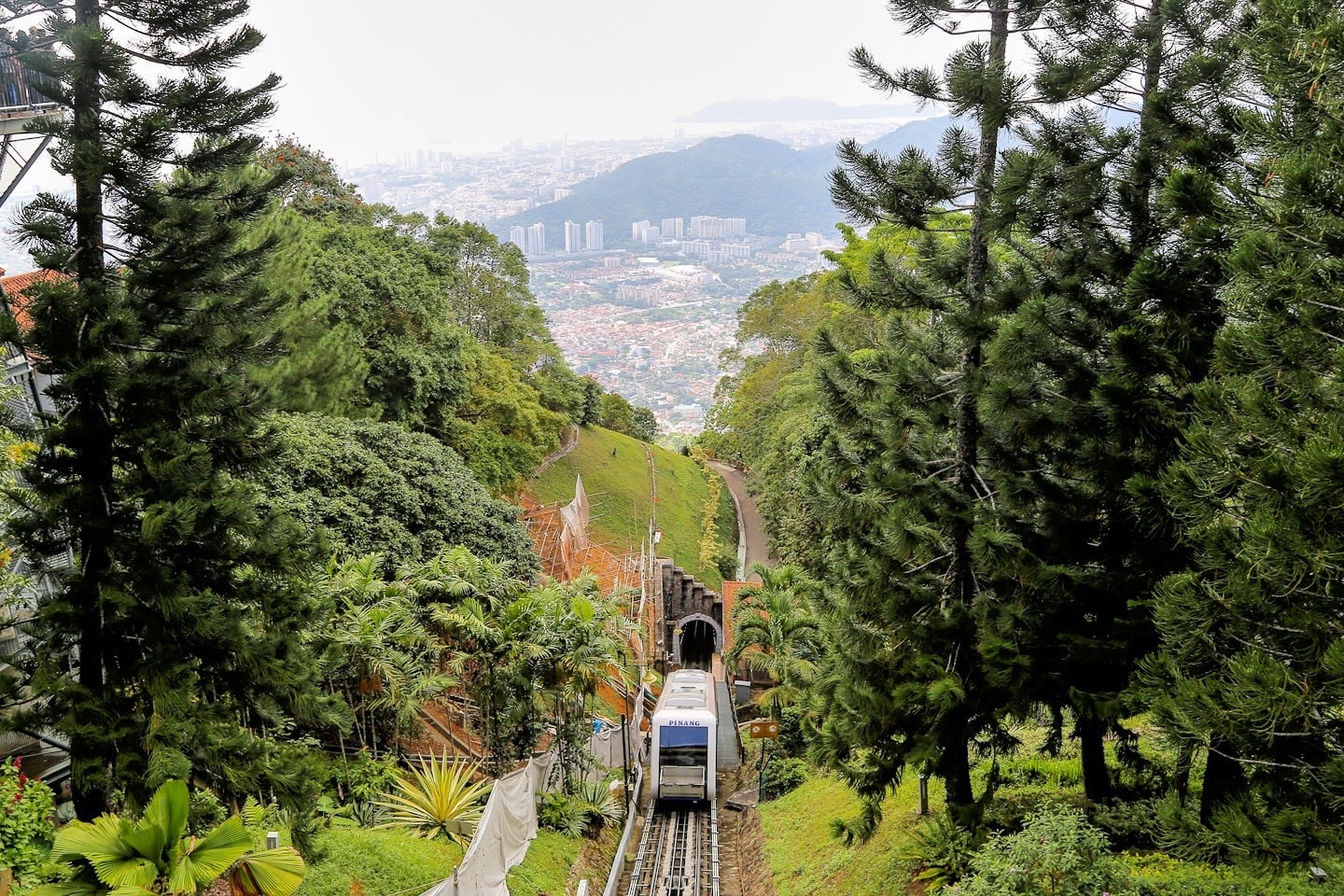 Looking down from the Upper Station back towards the city. 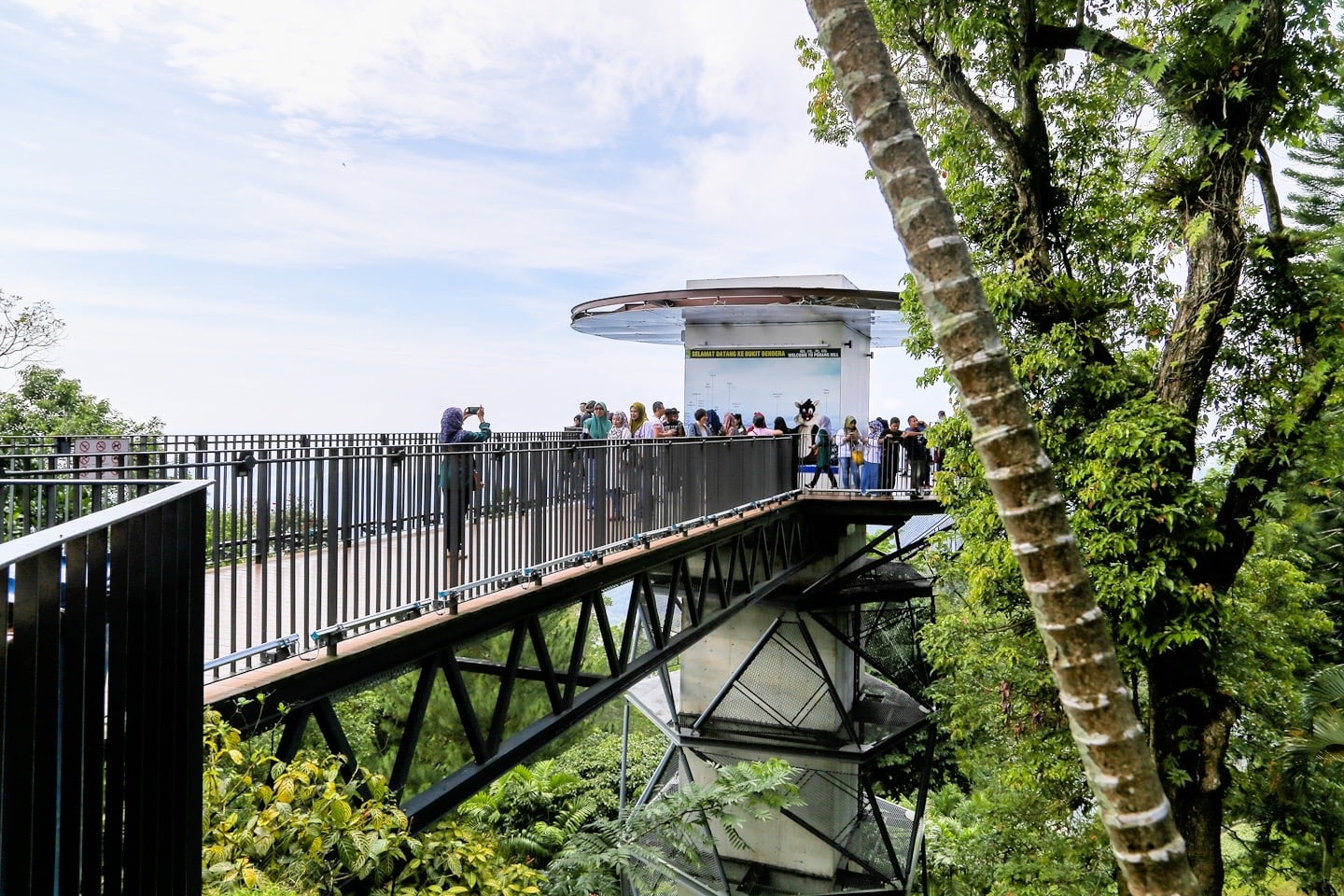 There’s a crazy looking platform at the top that offers 360 degree views of the island and city of Georgetown. 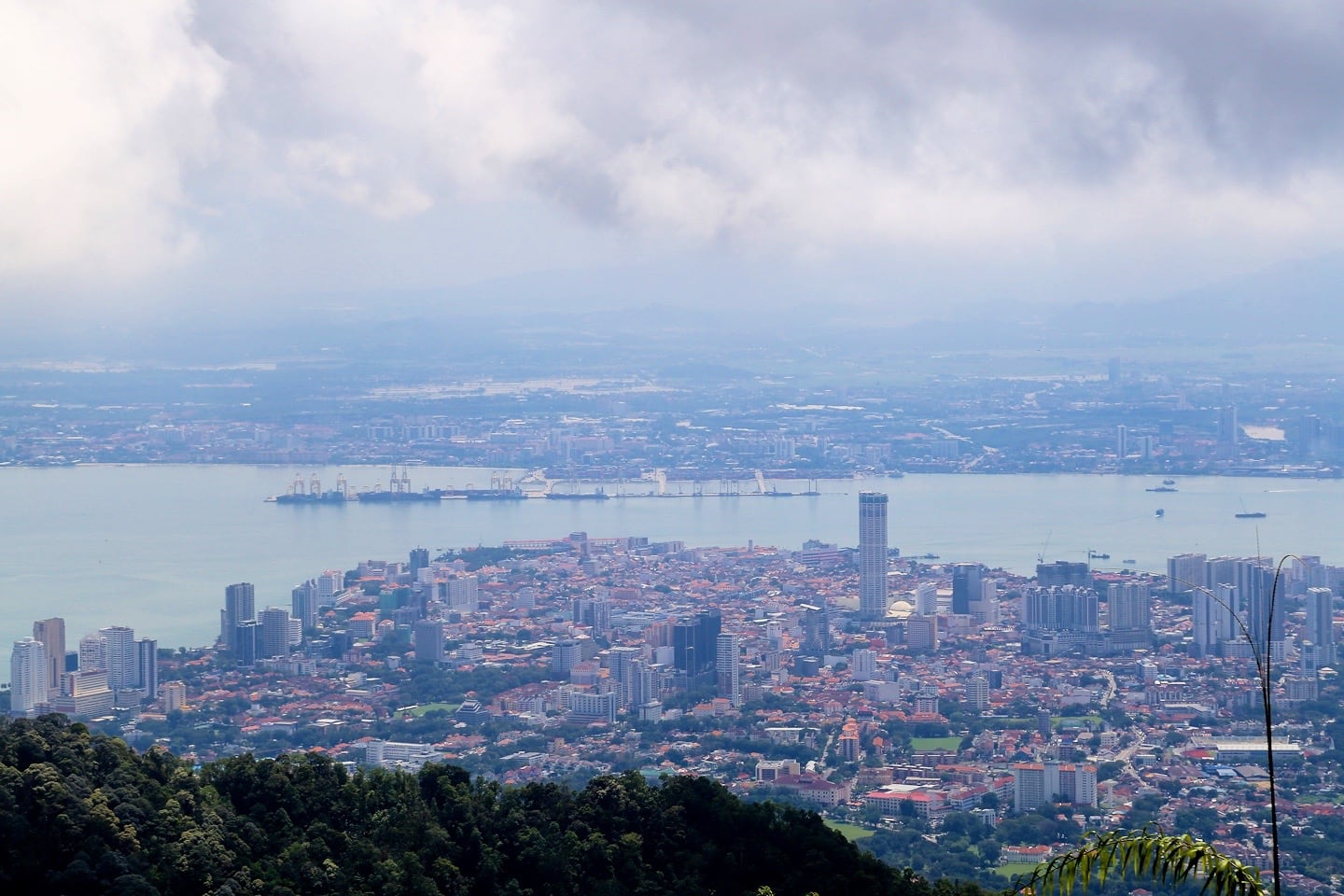 Though our views were hampered a bit by clouds and haze. But we felt extremely fortunate we weren’t visiting a couple weeks earlier when the entire region was inundated with toxic smoke from seasonal burning in Indonesia.

The low density area on the water (above) is Old Town, where we are currently staying. 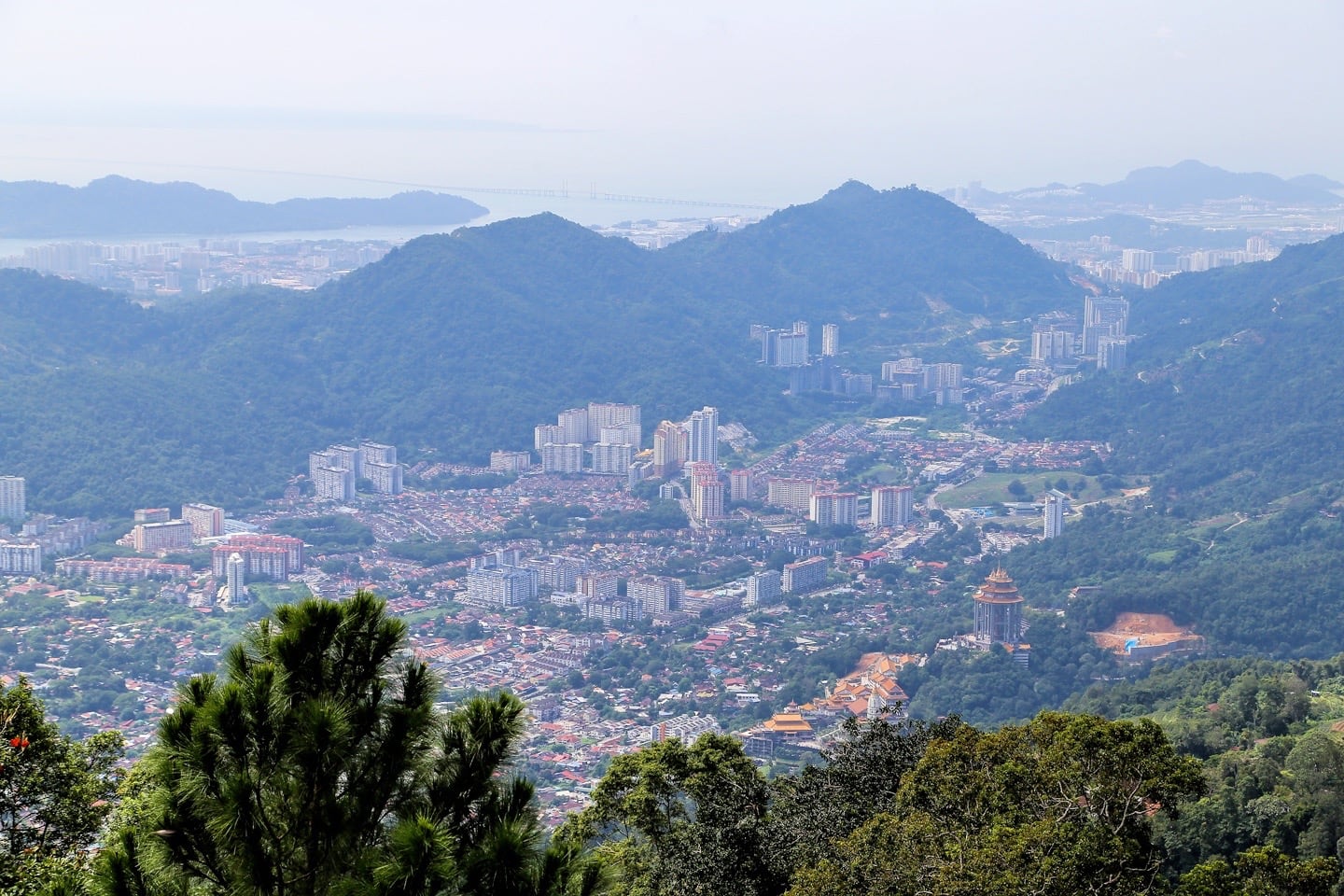 You can just barely see it, but that’s the famous Kek Lok Si temple down there near the tree line. We opted not to fold a visit to the temple in with a visit to Penang Hill due to time constraints. However, many visitors to Georgetown recommend doing just that, given their proximity to one another. 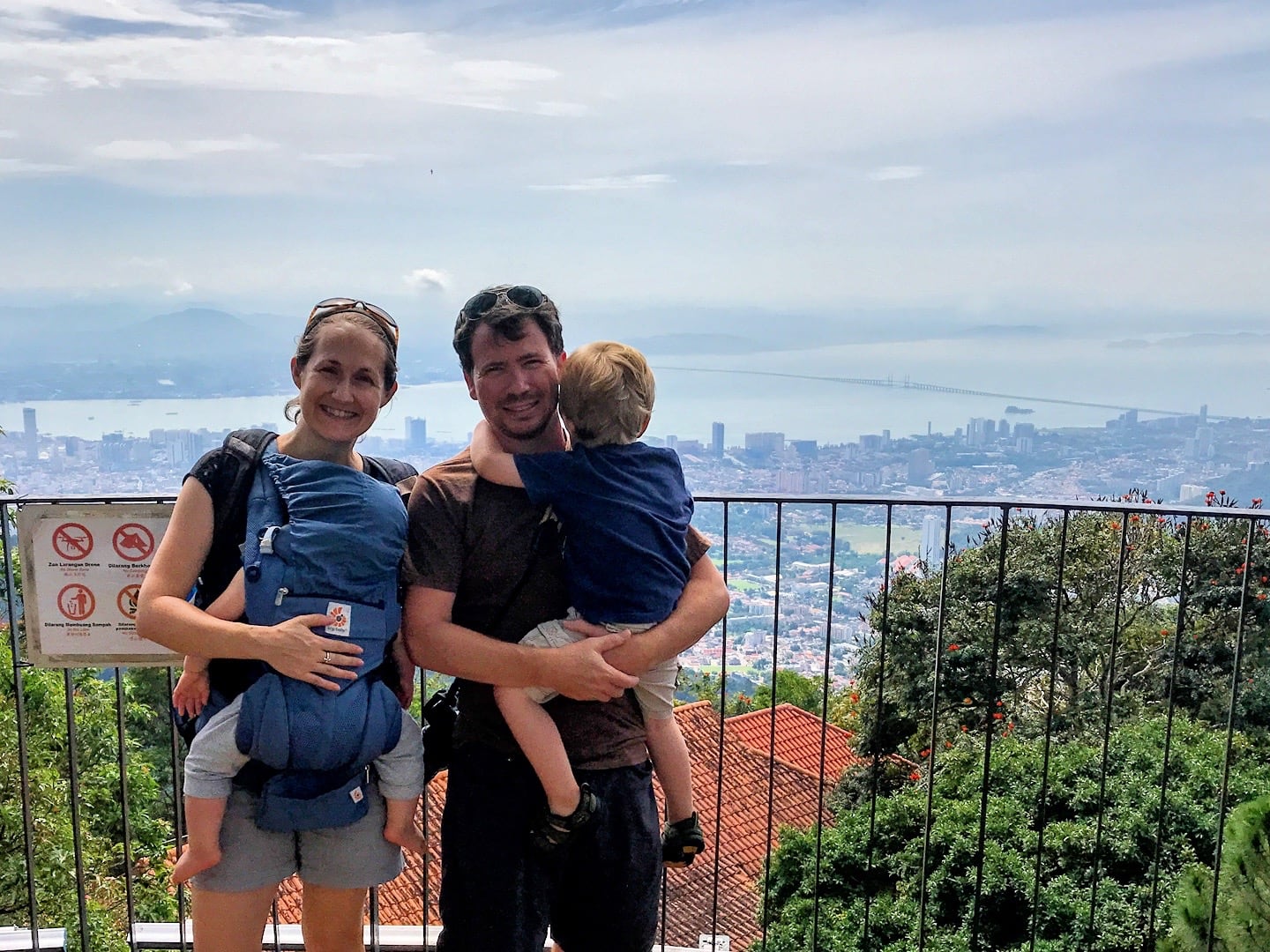 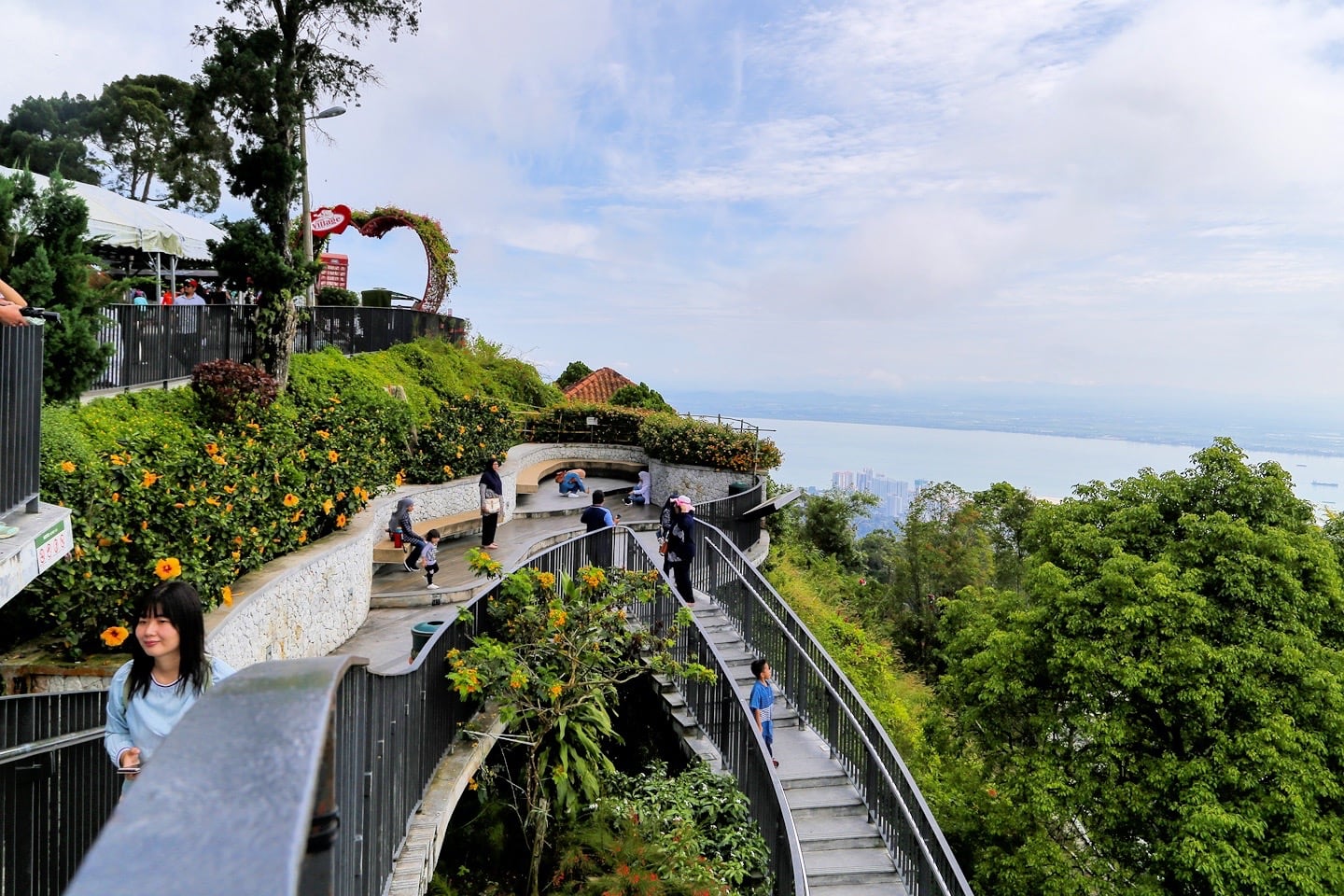 The complex here has been a hilltop resort for more than two centuries. In the late 18th century, a retreat was established by British colonists looking to escape the heat and malaria in the lowlands.

The earliest British visitors arrived by horse track up until the opening of the funicular in 1923. The funicular was overhauled with speedy and modern trains that are in use today.

Most development is centered along a long ridge that stretches for several miles, though most visitors stay close to the Upper Station. There are a number of restaurants and visitor services such as the historic and upmarket David Brown’s restaurant, and a number of local eateries; shops and gardens; and a mosque and colorful Hindu temple. 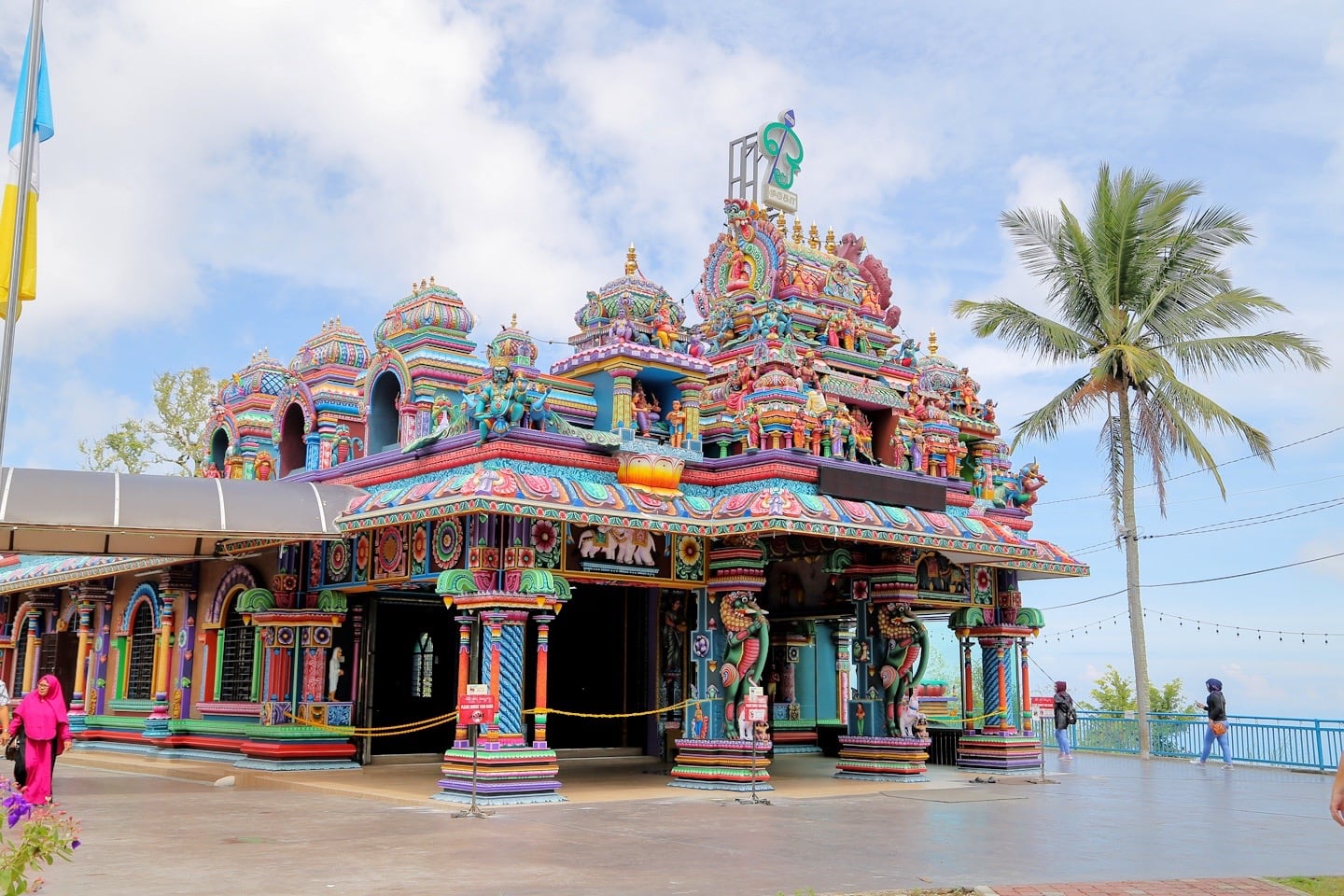 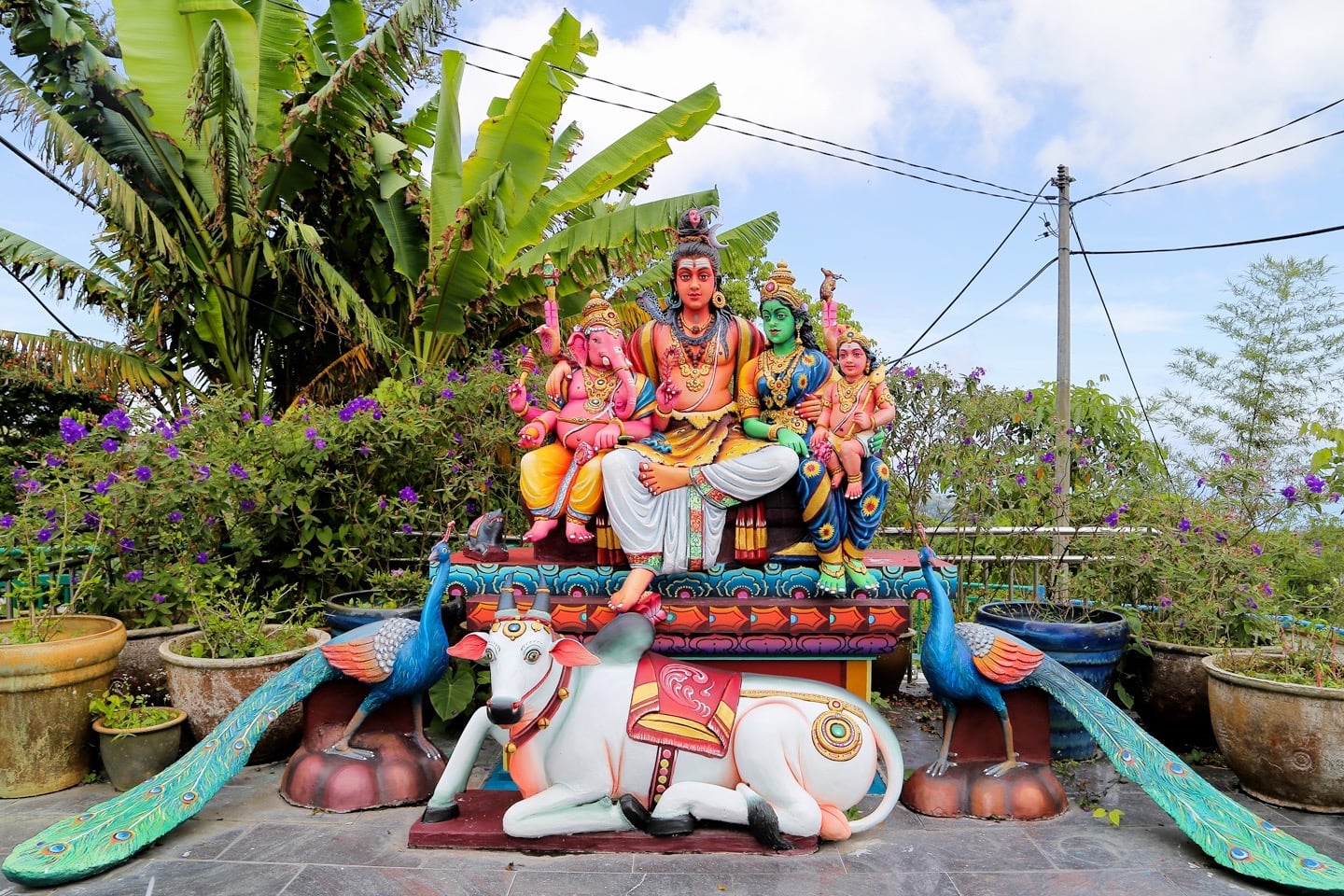 In front of the Hindu temple is a sizable playground, which Noe couldn’t pass on, of course. 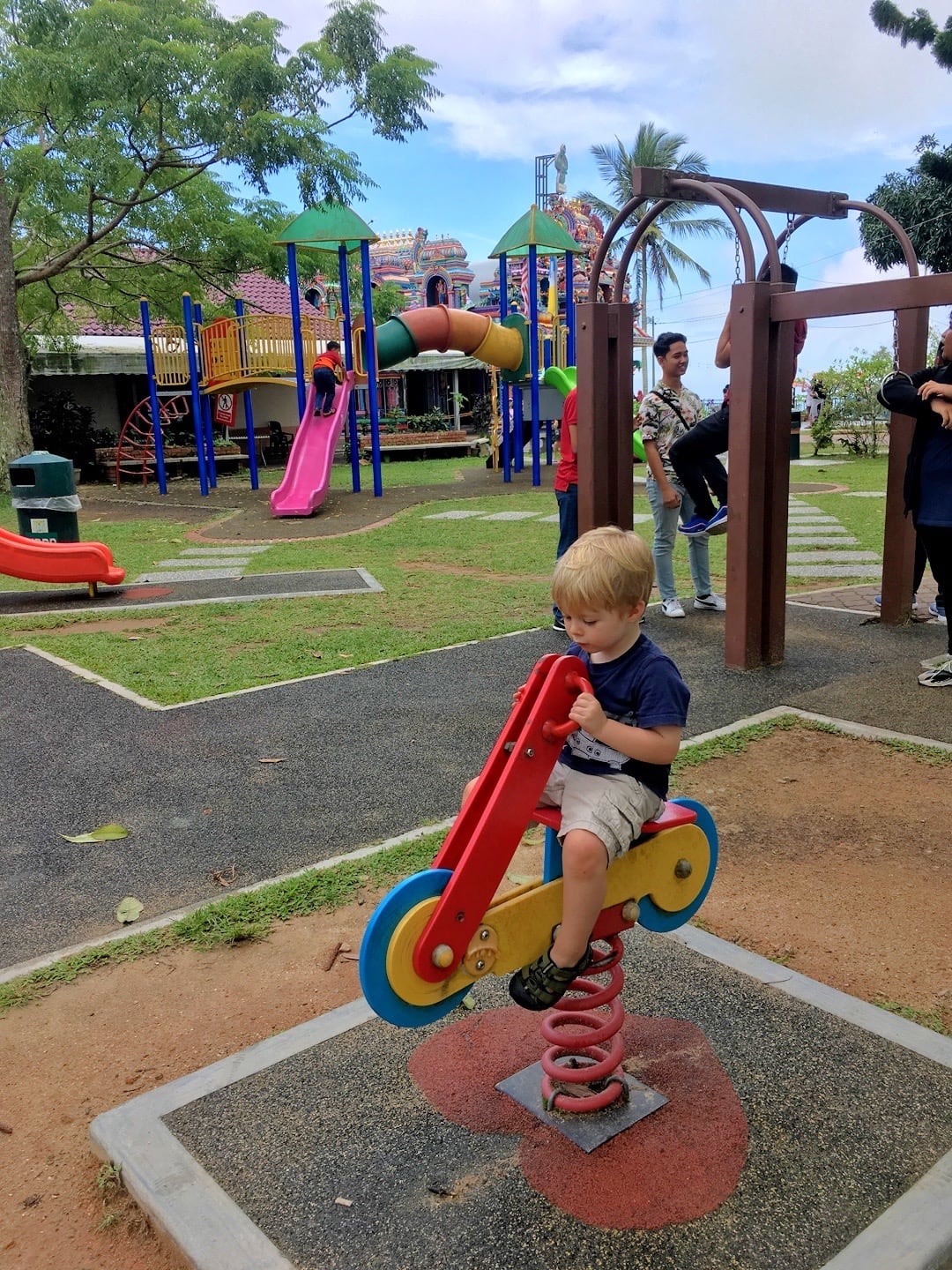 And, like usual, he made some new friends along the way. 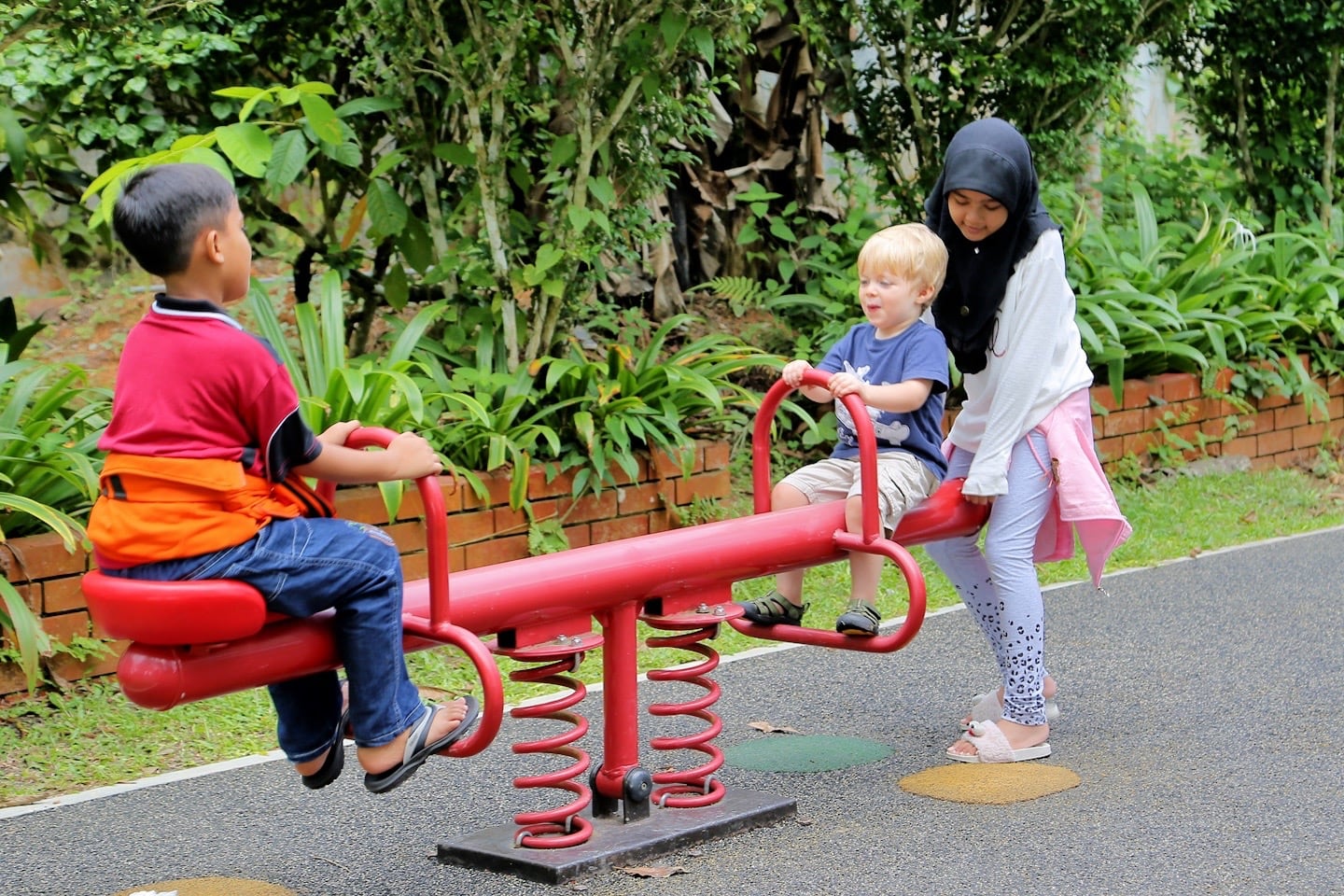 But there’s so much more to see on the hill than just the tourist village. A short distance from the main attractions is another major attraction on the hill: The Habitat, which features a series of canopy walks for an added fee.

Penang Hill also offers a vast network of hiking paths, and if we had a bit more time, that is exactly where you would have found us this afternoon.

Today, we’re content to see how much walking/hiking we can get in for a couple of hours and still have time to get the kiddos back down the hill for naps to avoid a miserable evening. Yay for rugrats!

Nonetheless, we still got in a nice 2 km (1.2 mile) walk along the main road, which was more than enough for us today. 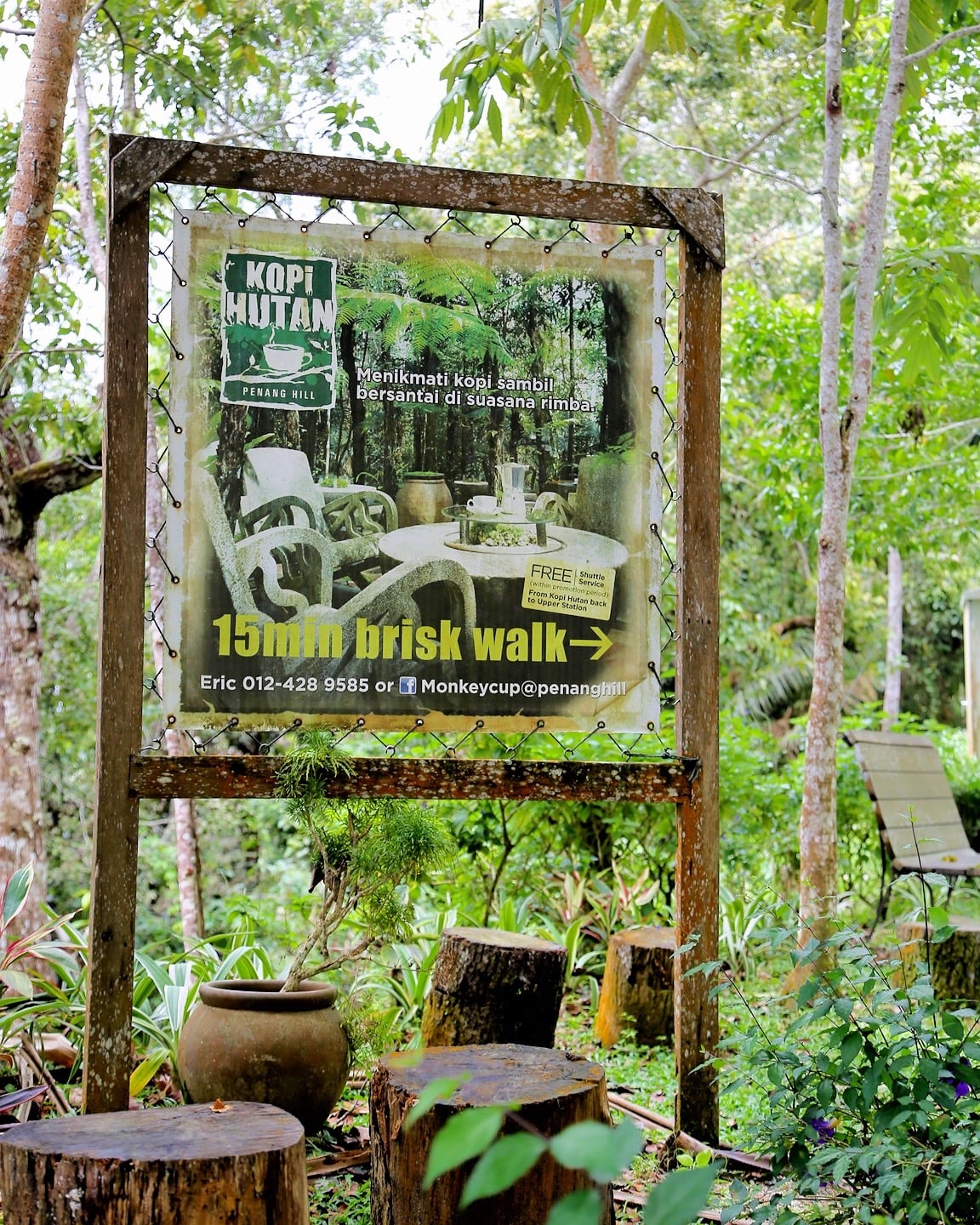 When we saw this sign, we knew MonkeyCup would be our destination for the morning. How can you pass up a place named MonkeyCup on a hill in the jungle?

The walk turned out to take much longer than 15 minutes (even with the kids, we were walking pretty “briskly,” and as I write this, Google says it’s a 20-minute walk, but I digress…). 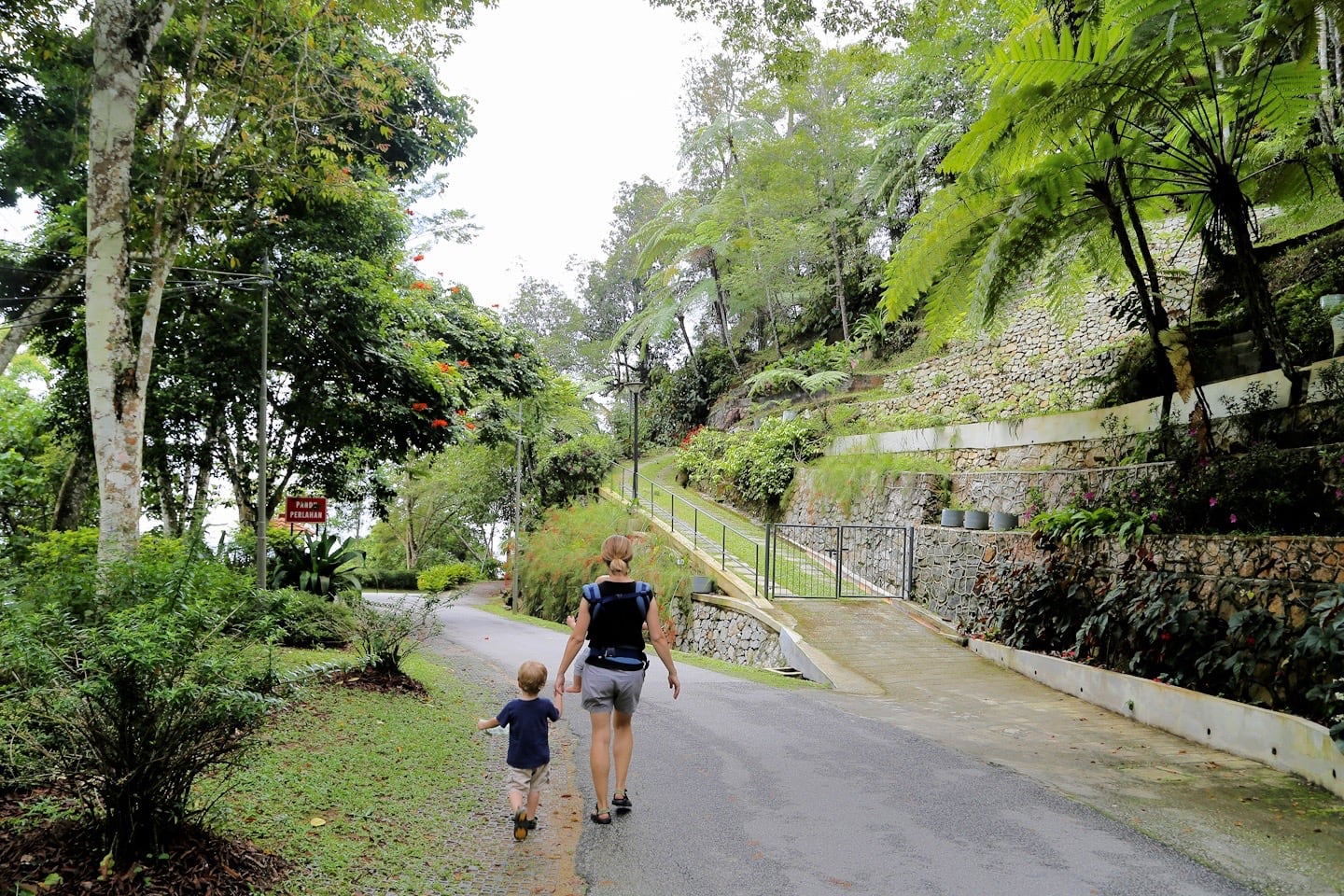 Walking to MonkeyCup brought back all sorts of memories of doing a similar walk to the zoo in Darjeeling years ago. No zoo up here today, but plenty of greenery and wildlife to keep the kids entertained. 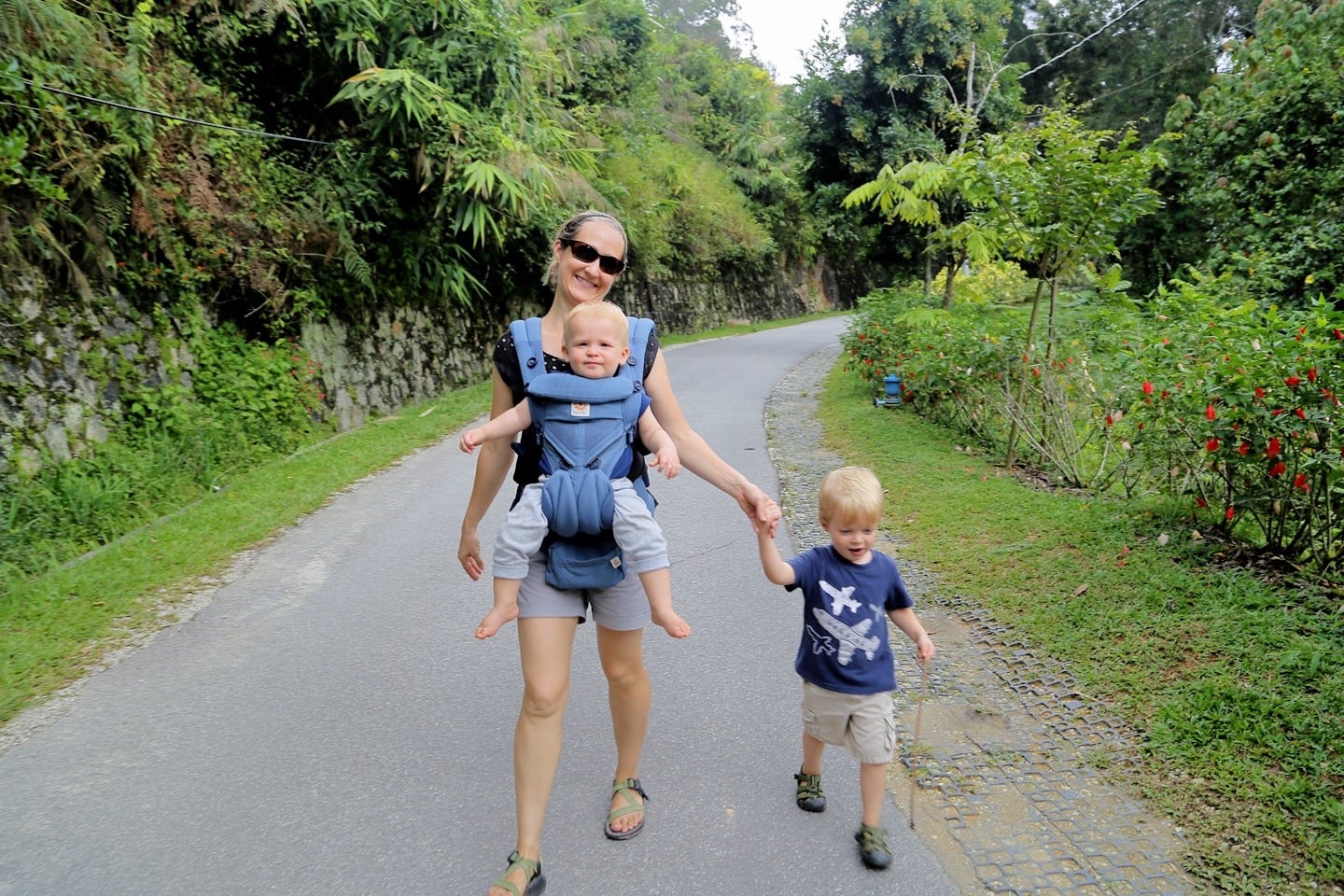 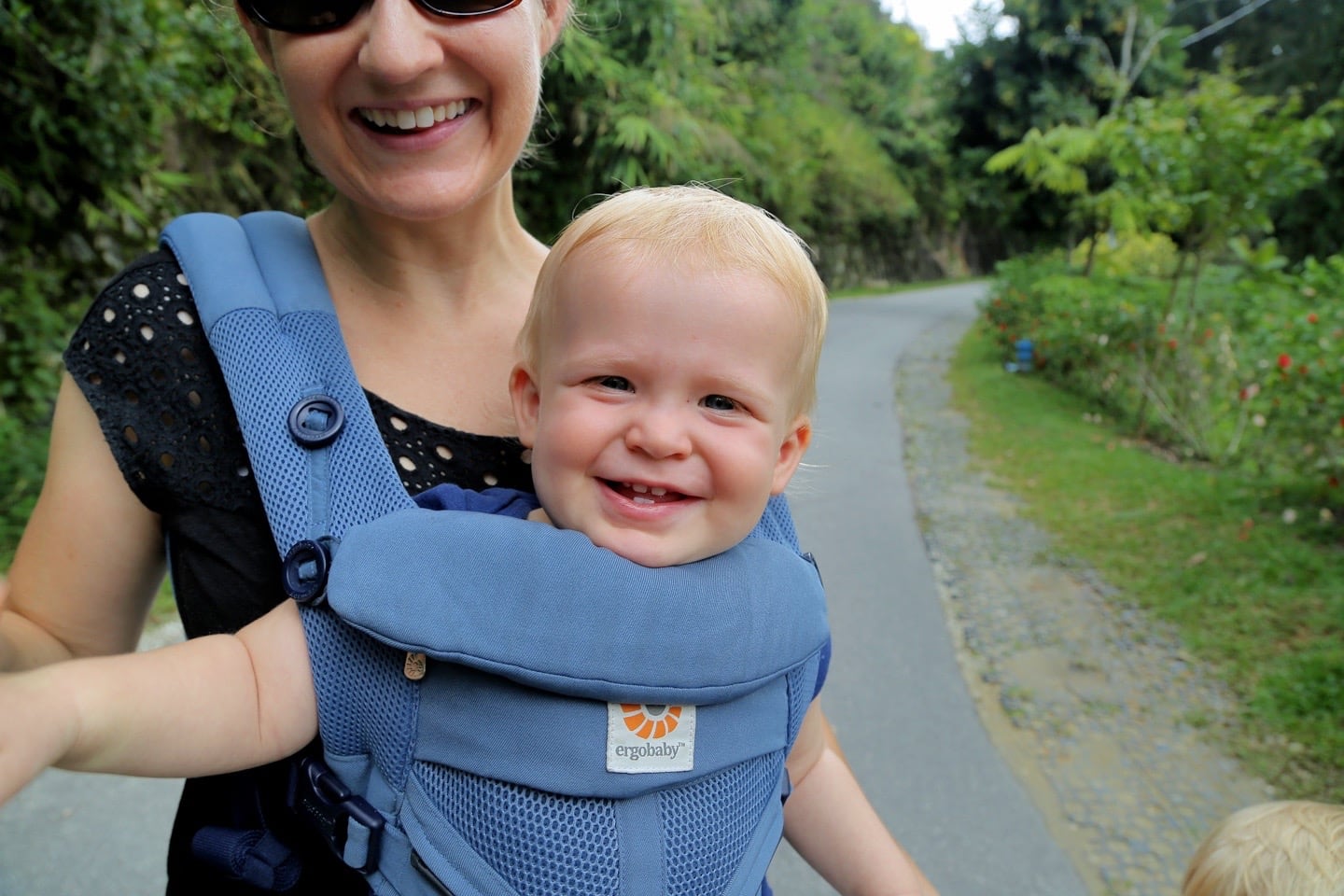 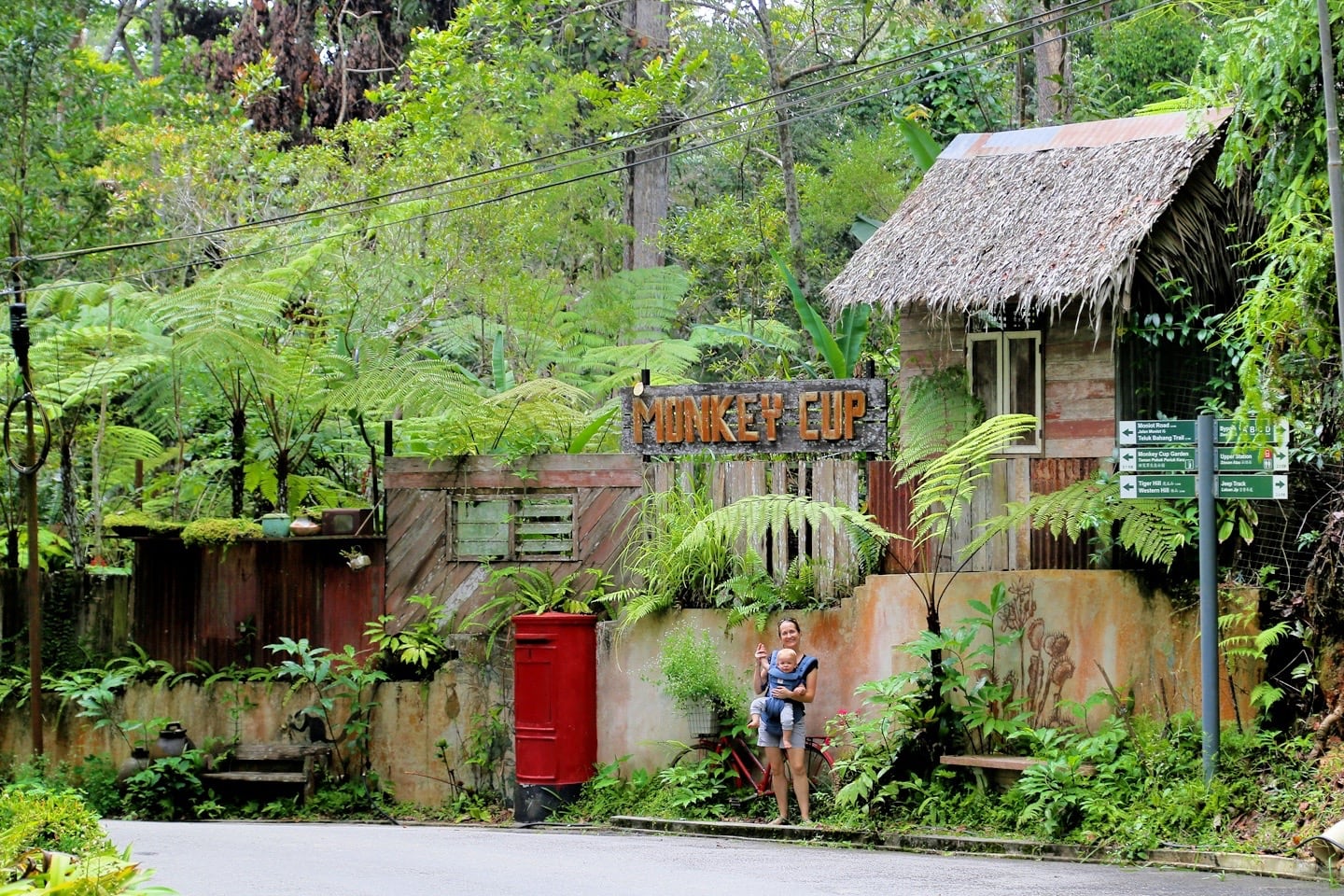 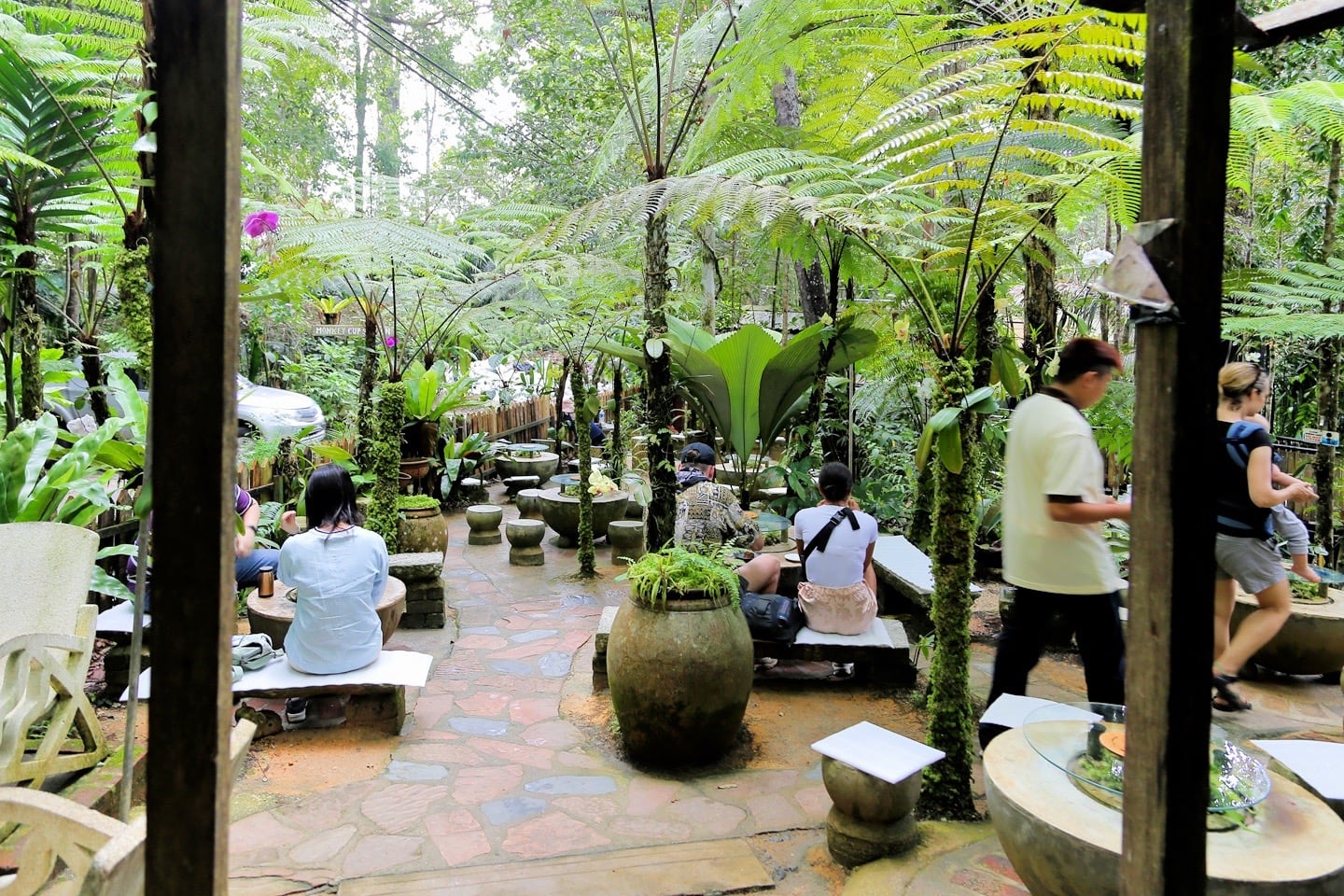 MonkeyCup is one funky little place. It’s actually named for the carnivorous Monkey Cup plant which has been used as a vessel for traditionally brewing a special local coffee concoction called Kopi Hutan. 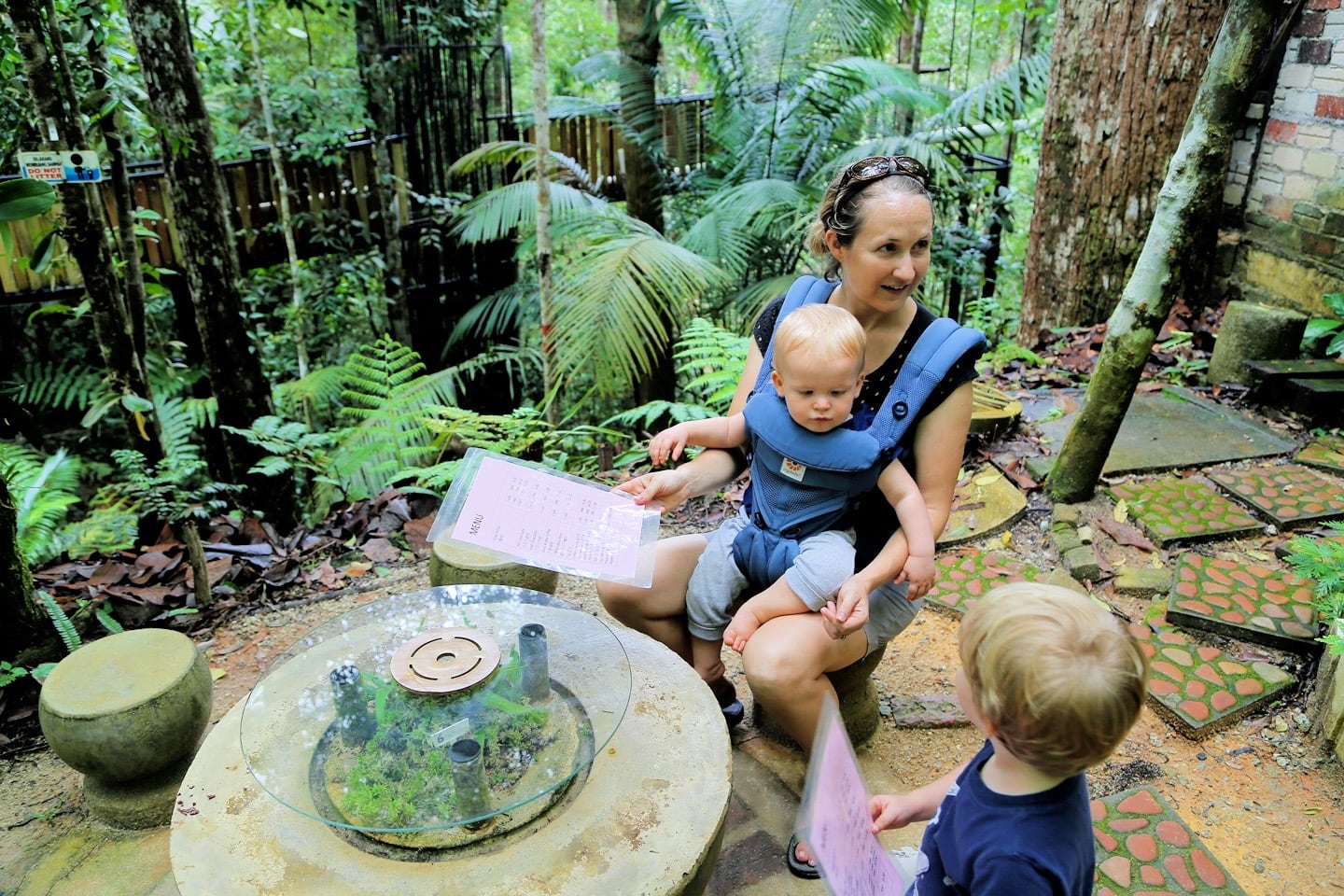 Before our coffee arrived, I thought I’d go use the loo, which turned out to be quite the little experience in itself. 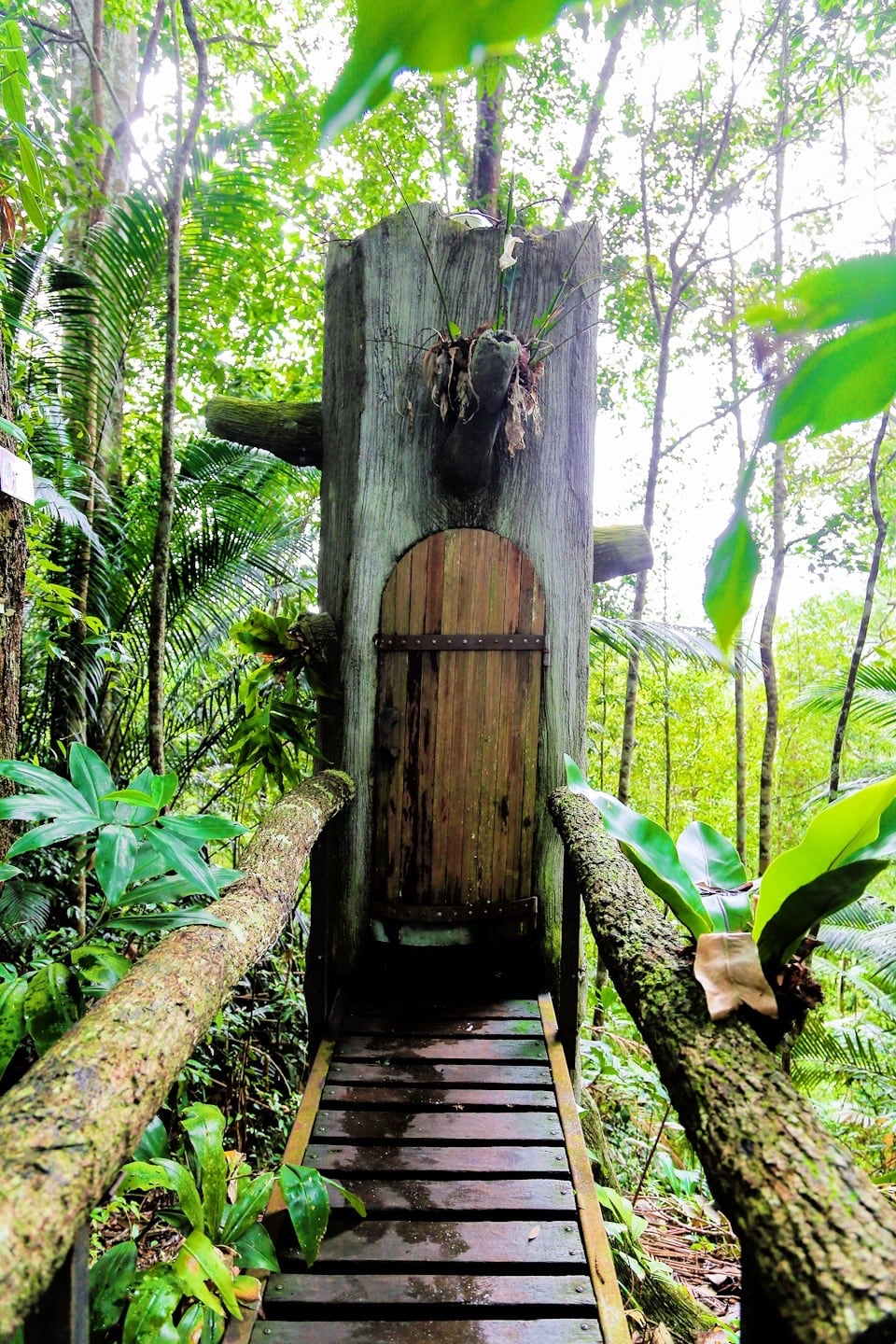 I can safely say I’ve never done my business in a forest gnome tree…at least not until today. 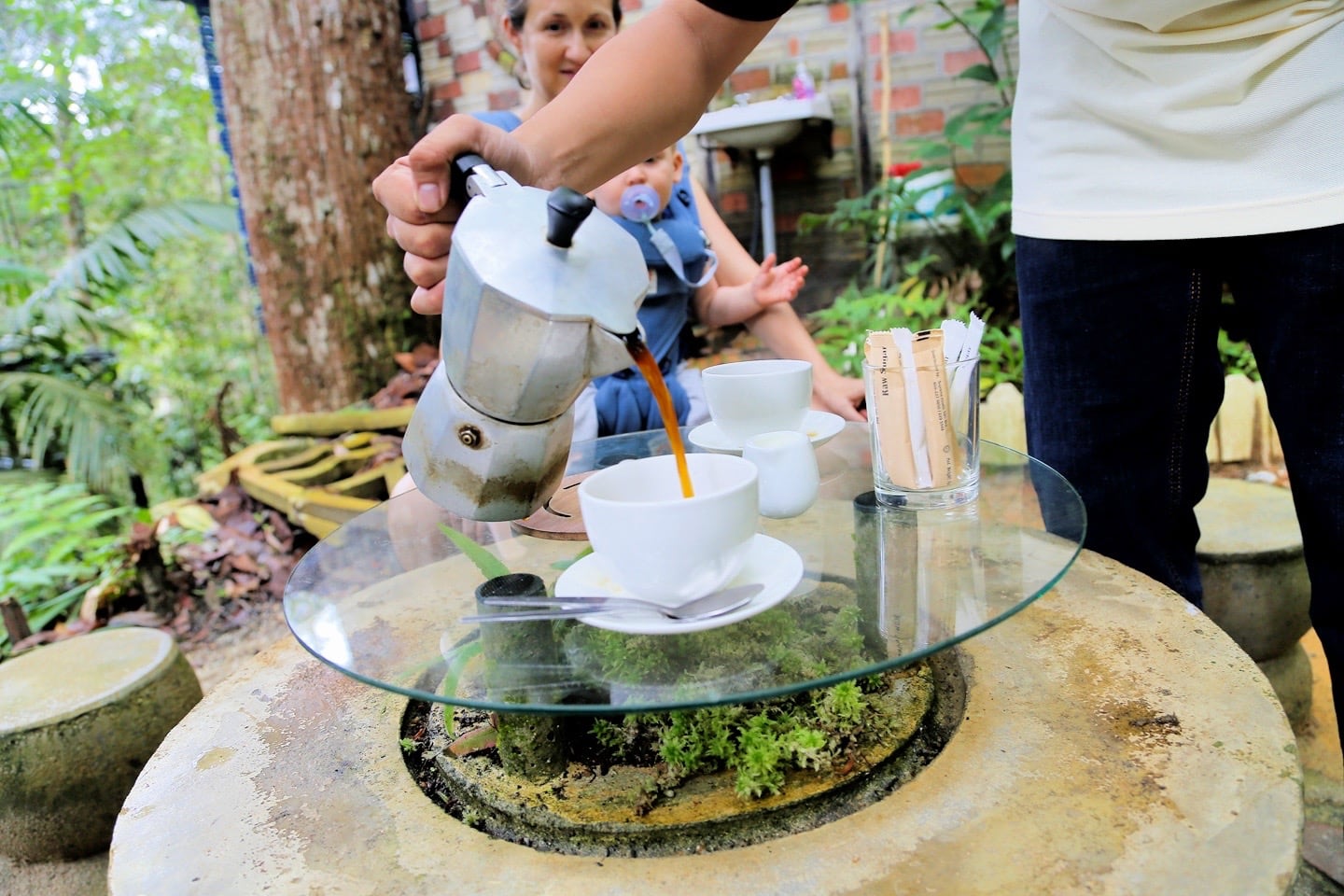 The brew was a bit unusual, but tasty, nonetheless. Adding a generous helping of sugar and cream helped a lot (and I nearly always take my coffee black…). 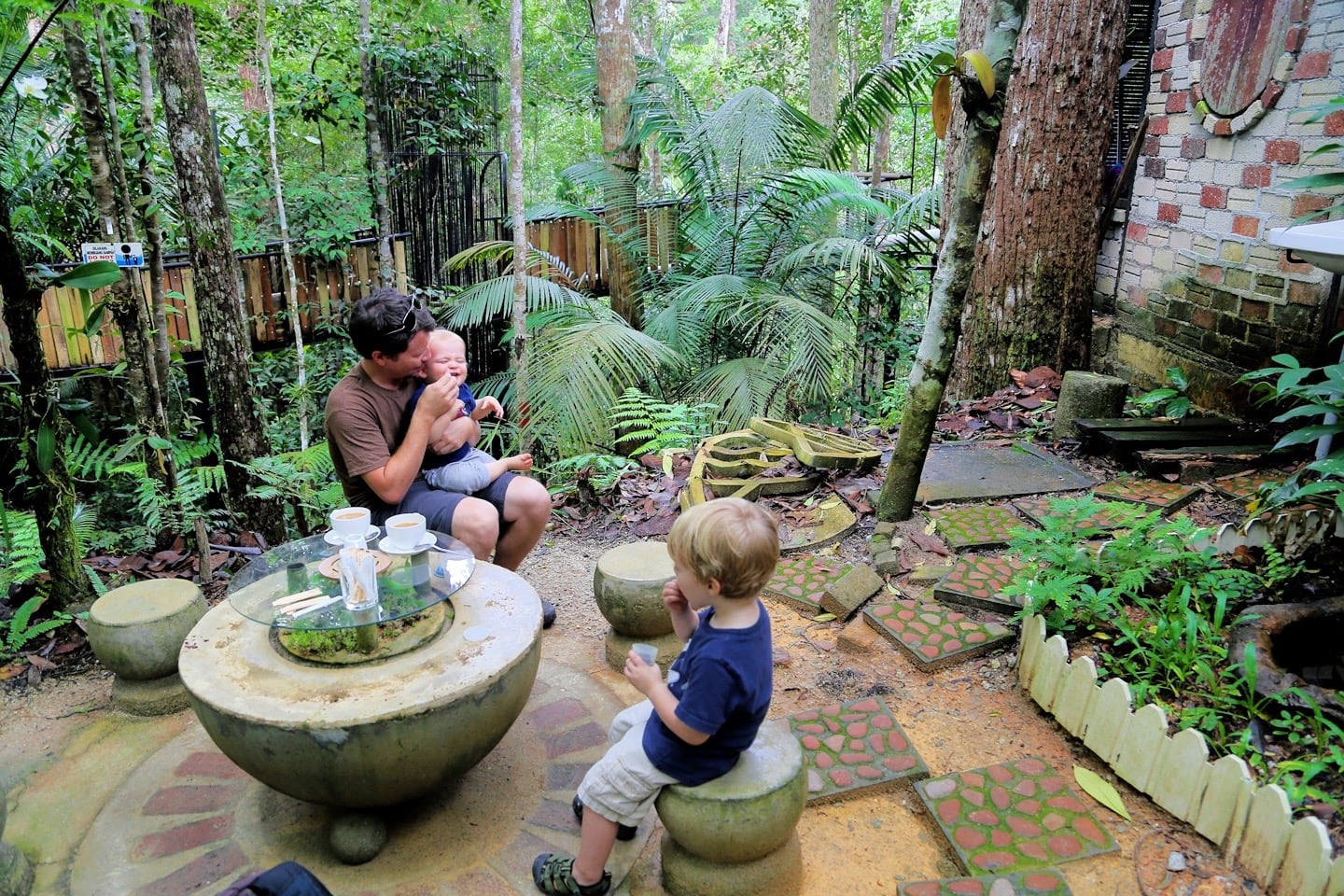 There are signs posted all around cautioning against feeding the wild creatures. Noe clearly ignored the advice. 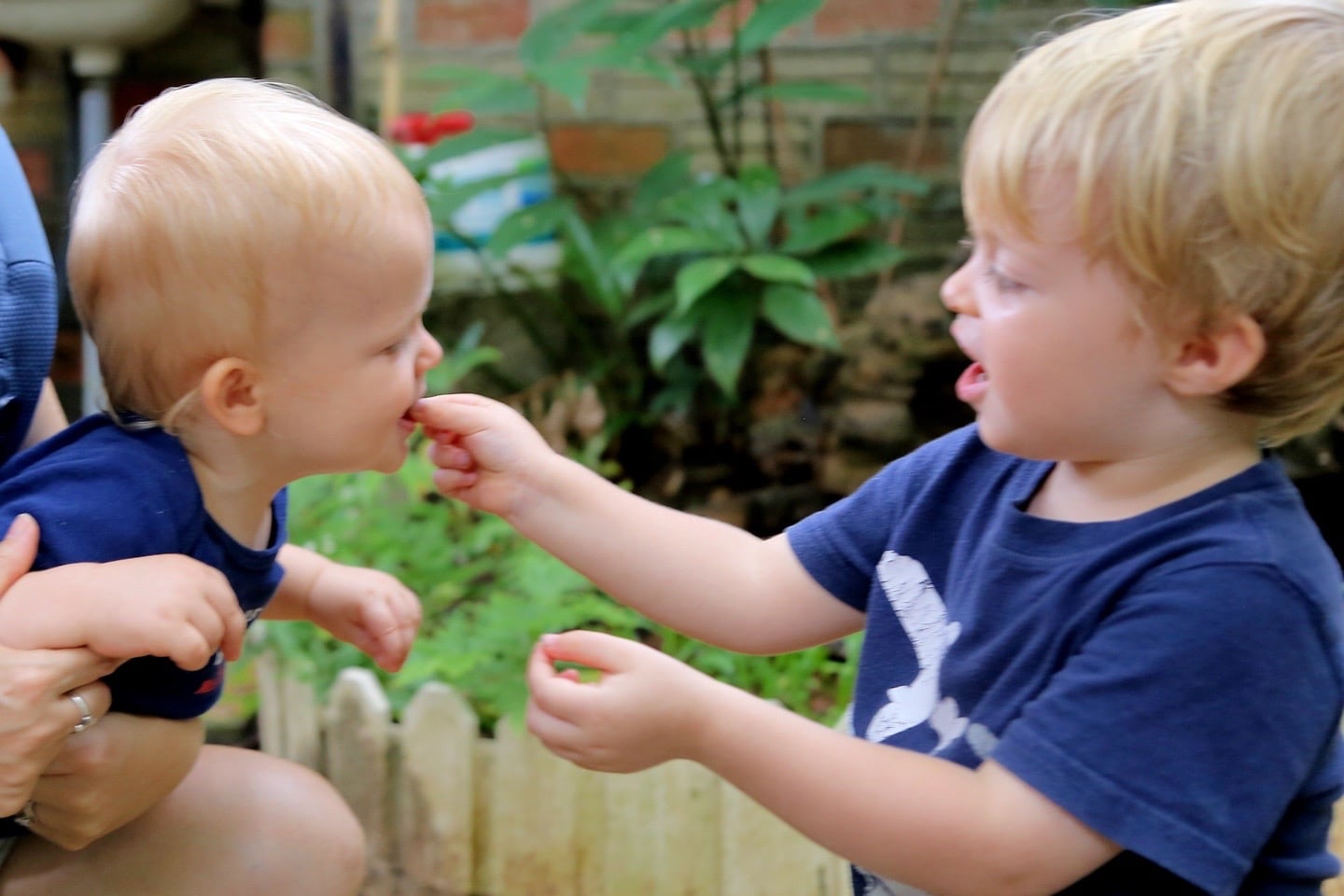 The Dusky Leaf monkeys were another matter, entirely. We all stayed clear of those. 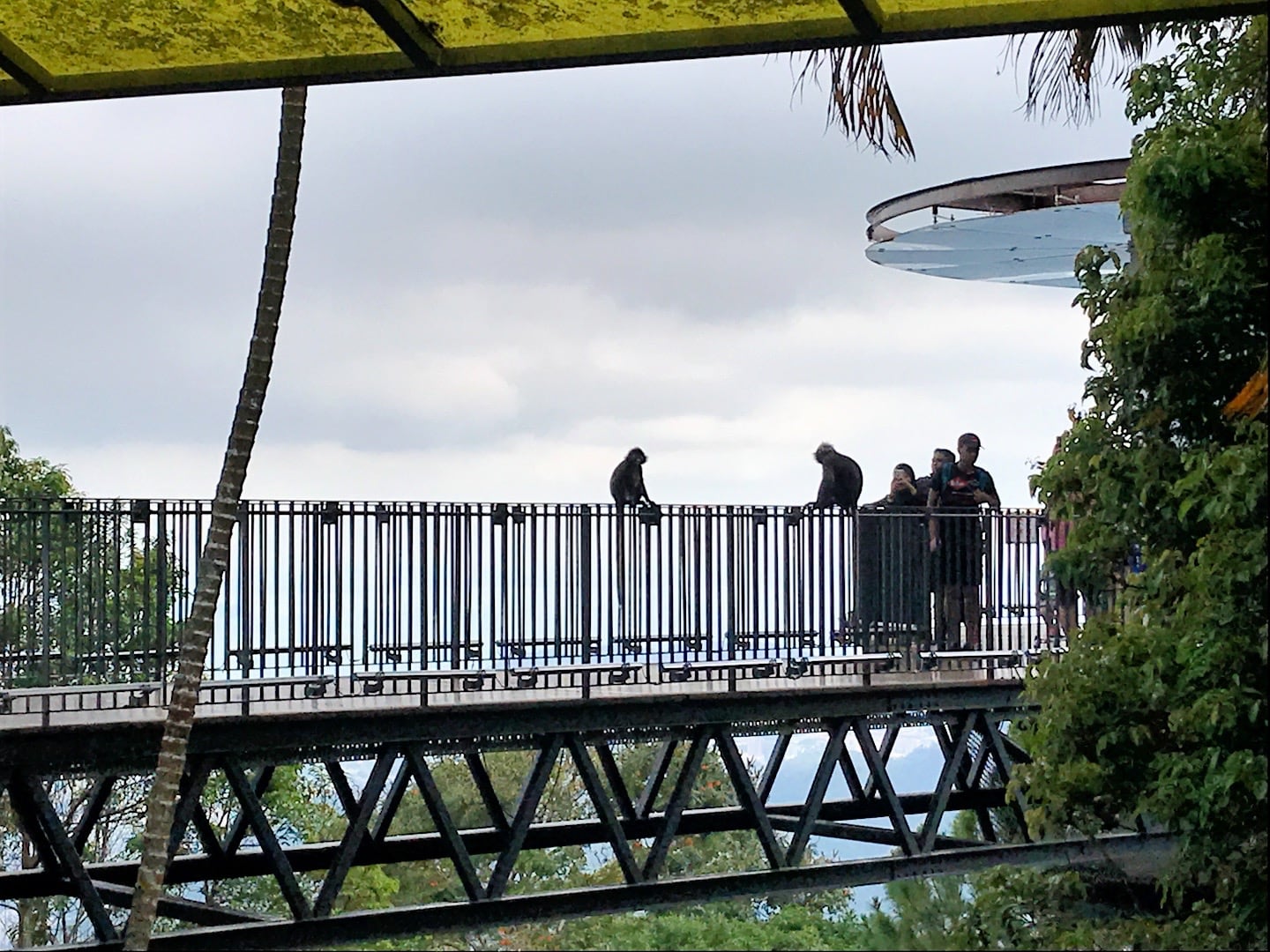 That’s not to say they weren’t fun to watch. We were treated to quite the little show, complete with a gaggle of tiny baby Duskies. 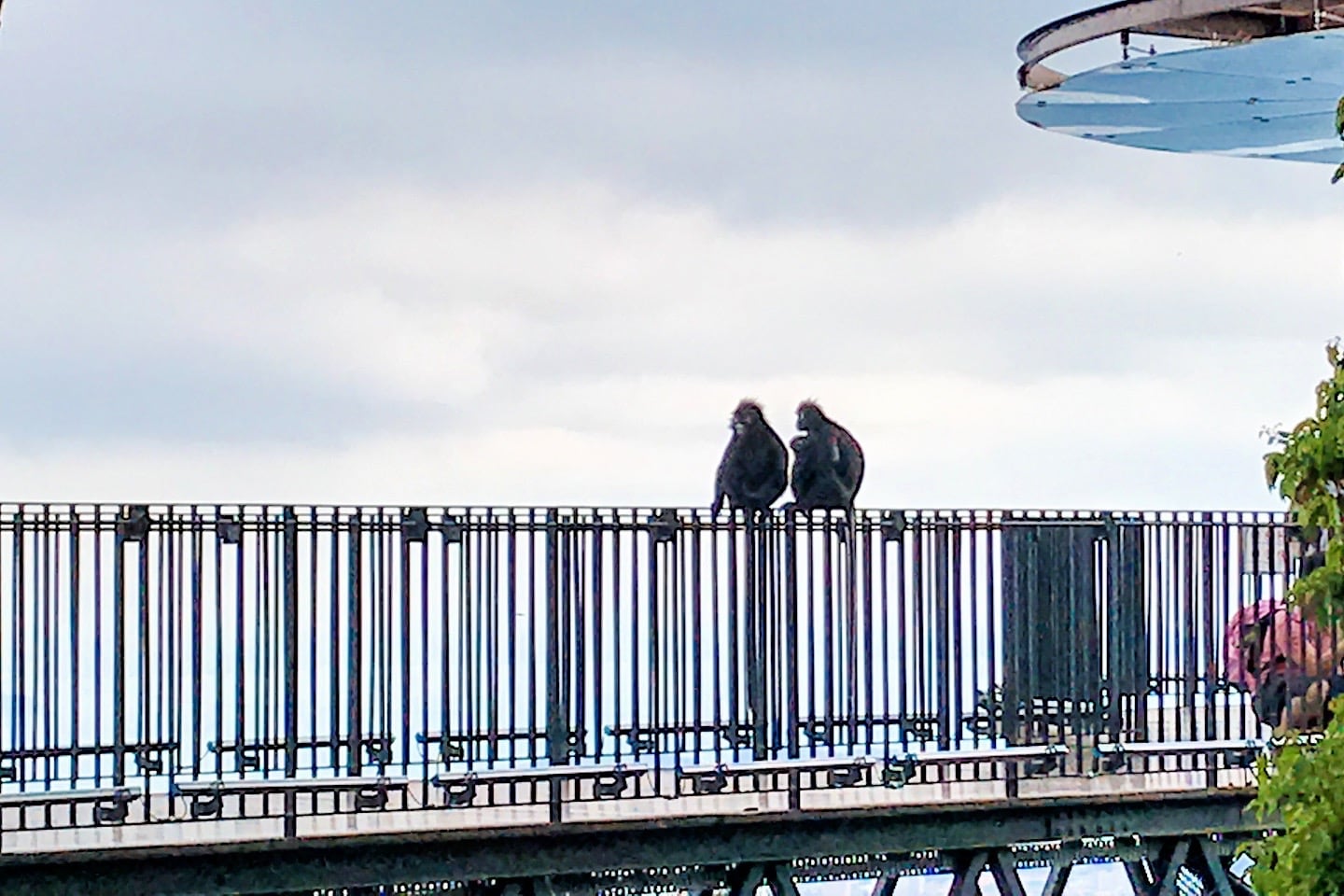 MonkeyCup offers a free shuttle service for customers back to the hilltop village, which was a welcome little perk. On account of lunchtime, we waited about 15 minutes longer than expected for a ride, but it was worth the wait.

After taking the funicular back down the hill, Lori and Noe went to peruse the gift shop while I went about the work of grabbing a Grab car back to town.

Again, I assumed it would take a bit of time for someone to respond to my request, then for the driver to get here. Yet, the driver accepted my request and sent me a notification that he was here and waiting almost immediately.

It seems, a number of drivers just hang out around the entrance to the Lower Station, which makes sense in hindsight.

Twenty-five minutes later, we were back at the townhouse and ready for a restful couple of hours.

Such a beautiful day trip!! Thank you for sharing..

It was indeed! Thanks for reading, Janice!