After a night reconnecting with our inner “Wild Spirit,” we spend the day hiking to Nature’s Valley and the Indian Ocean, then back again.

At Wild Spirit Backpackers, you can get info on a variety of hikes in the area. They’ve got a helpful hand-drawn map (which Lori took a photo of), which is key, given that it is difficult to find info on the hikes and the trails aren’t always clearly marked. 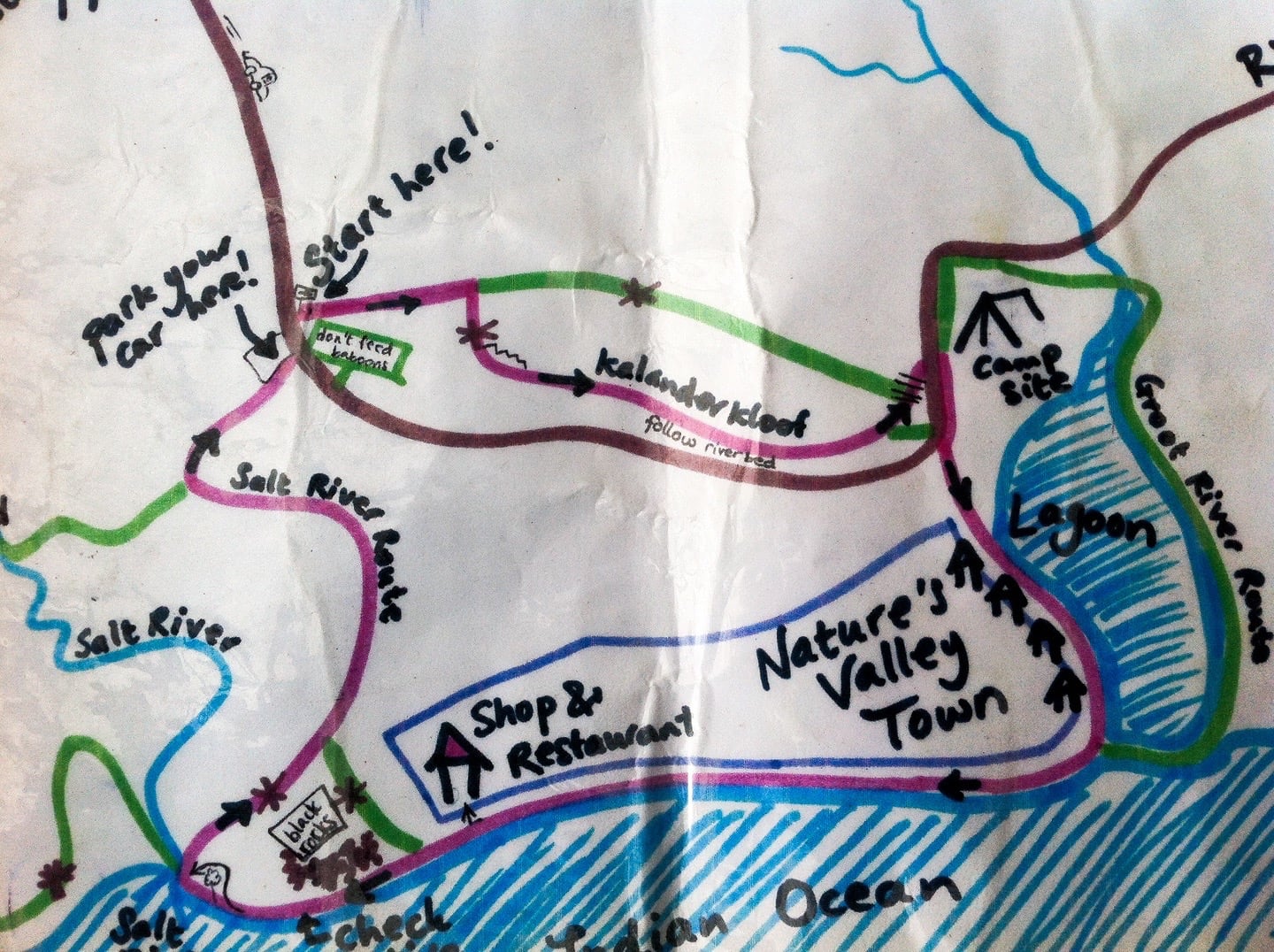 We opted for the Kalander Kloof trail out and the Salt River route back (highlighted in pink), which was supposed to take about 5-6 hours. The one caveat associated with this trail was that we had to make it past a certain portion of the trail (the Black Rocks) as close to low tide as possible to be able to complete the entire loop and see the most scenic portion. This added a bit of stress to the hike, as we had only been told that if we leave no later than 10am, we should be fine…but wondered how much flexibility we had, given that it would take several hours to reach the stretch in question and we might like to spend some time walking around Nature’s Valley town before arriving at the rocks. 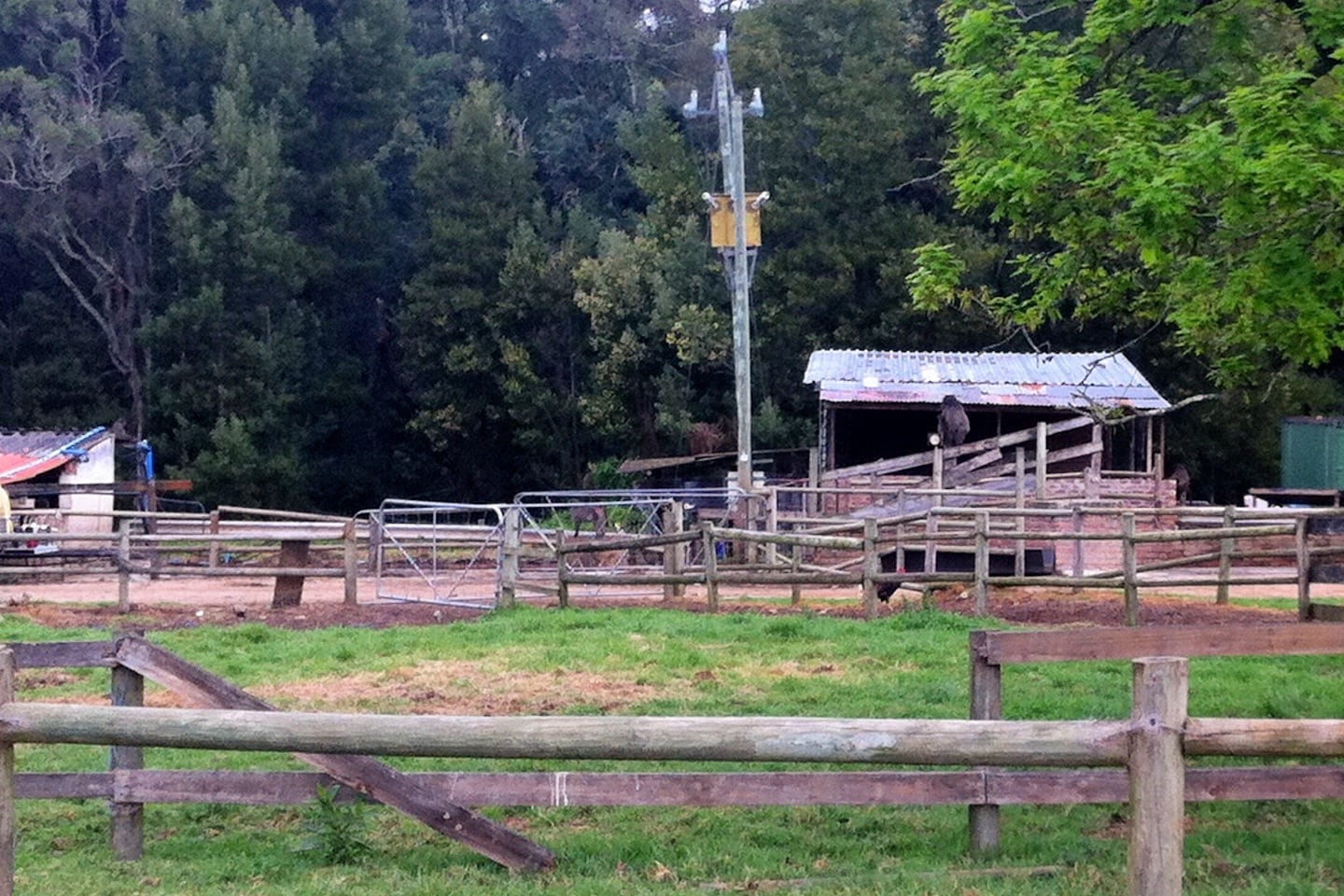 On our way to the trailhead, we stopped at a farm stall where Lori ran in to get some fresh bread and cheeses for the hike. I stayed in the car. After a few minutes, I looked over and noticed a cow, then a bunch of roosters and a cat. Then some sheep. A tranquil barnyard scene. I thought to myself, this is nice. So peaceful.

Then, all of a sudden, the place was crawling with baboons–jumping up on the fences, going through the sheds, terrorizing the farm animals. Holy crap, I thought. The cow and the sheep hurried over near my car and stared at me as if to say: “Please do-oo-oo something!” There was really nothing I could do but sit by and watch in amazement at the baboons sheer lack of social intelligence. They were absolutely ruining the party and making monkeys of themselves. I took the above photo just before they all retreated back into the trees.

Right then, Lori emerges from the store and I told her about the barnyard animals, and then the baboons, etc. She looked at me in disbelief. I brought up the story a few more times over the next week until she said, “I don’t even think you saw any baboons!” To which I replied, “I thought you might say something like that,” and pulled out my iphone to show her this picture. That was the last time she questioned my baboon stories.

Hey kids, can you spot all four baboons in the photo above? 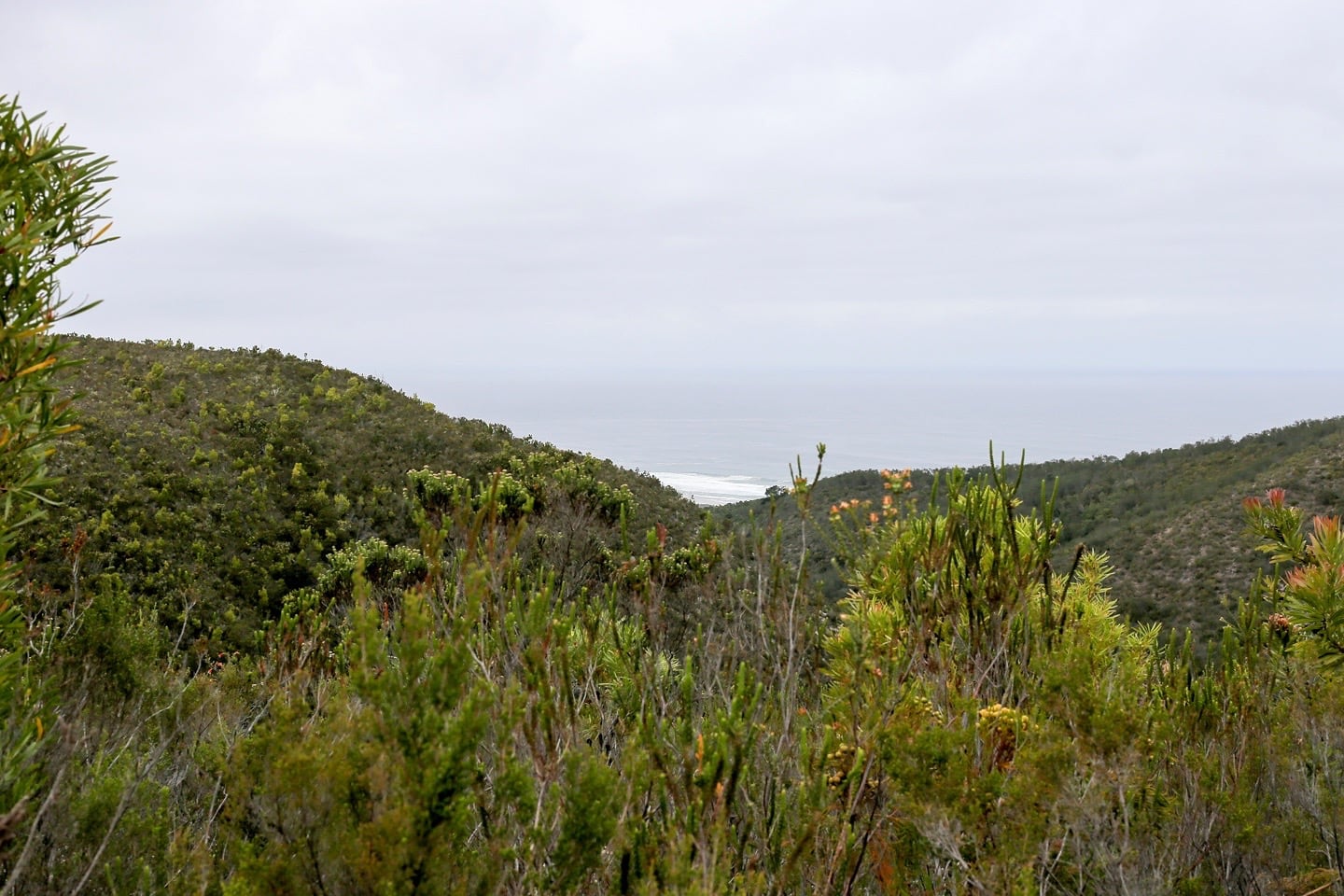 The hike was pretty amazing, and incredibly varied. We started under cloudy skies high, in meadowlands overlooking the ocean below. 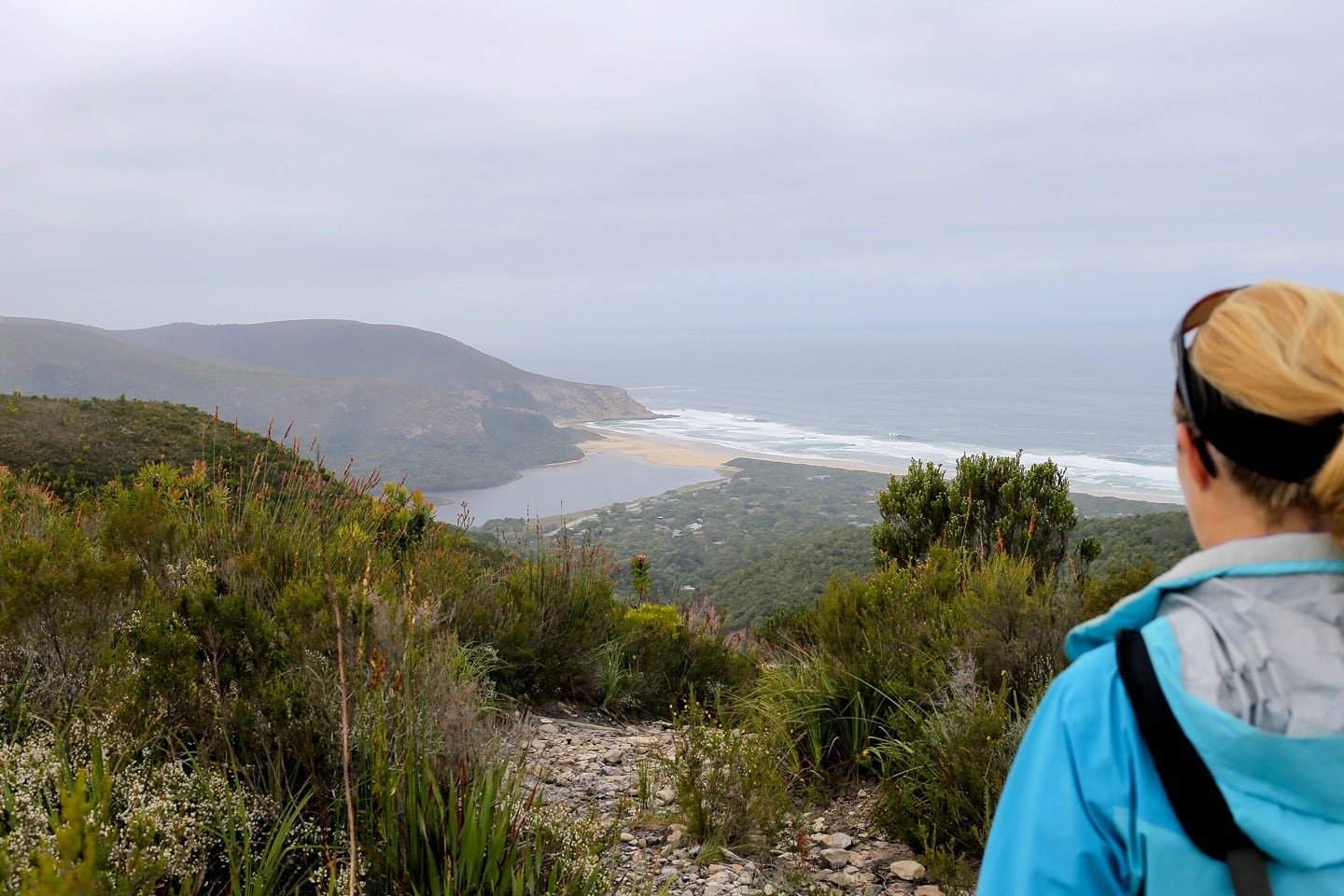 …and saw all sorts of birds along the way, including the bird to spot in this part of the world, the elusive and funky looking Knysna Turaco: 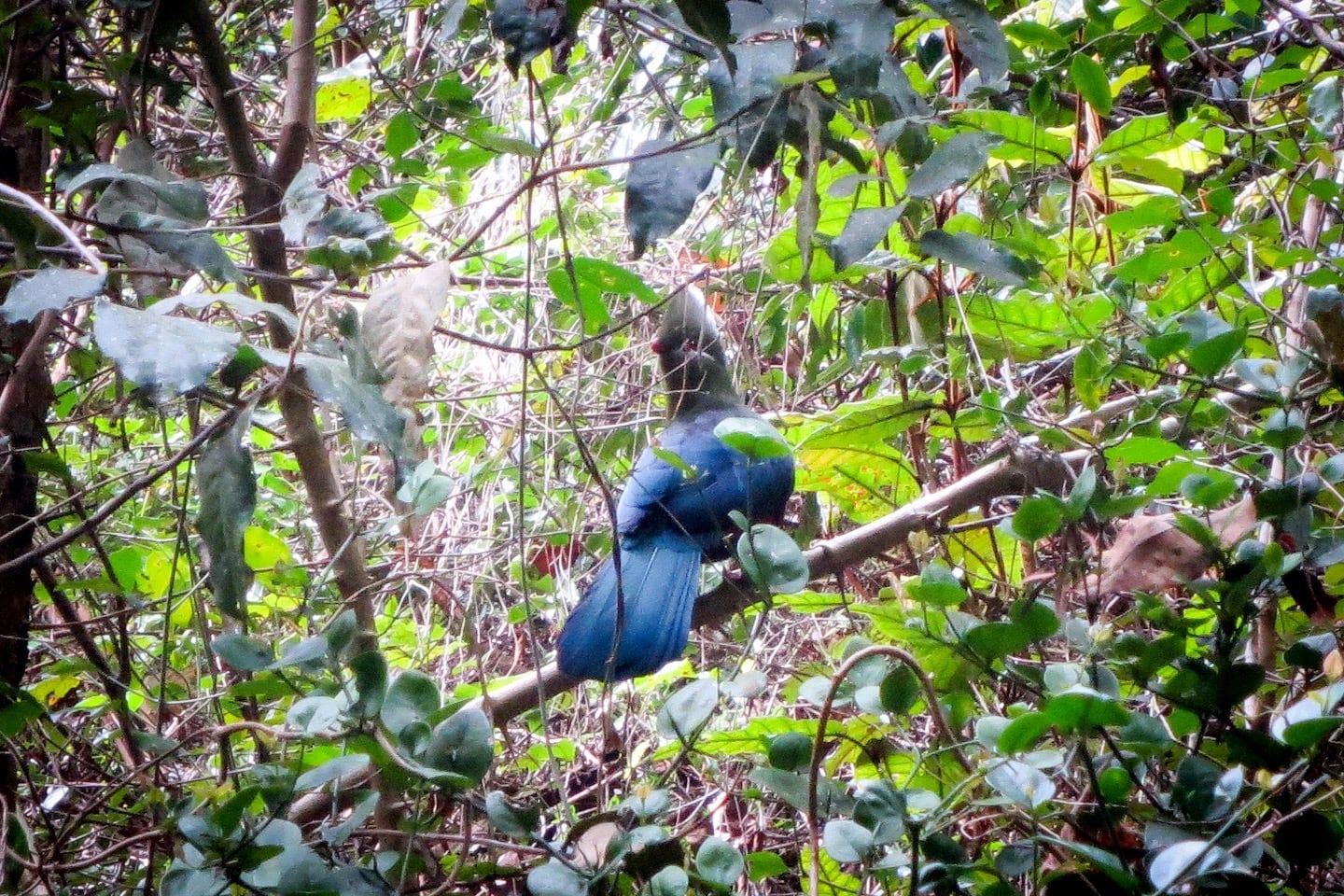 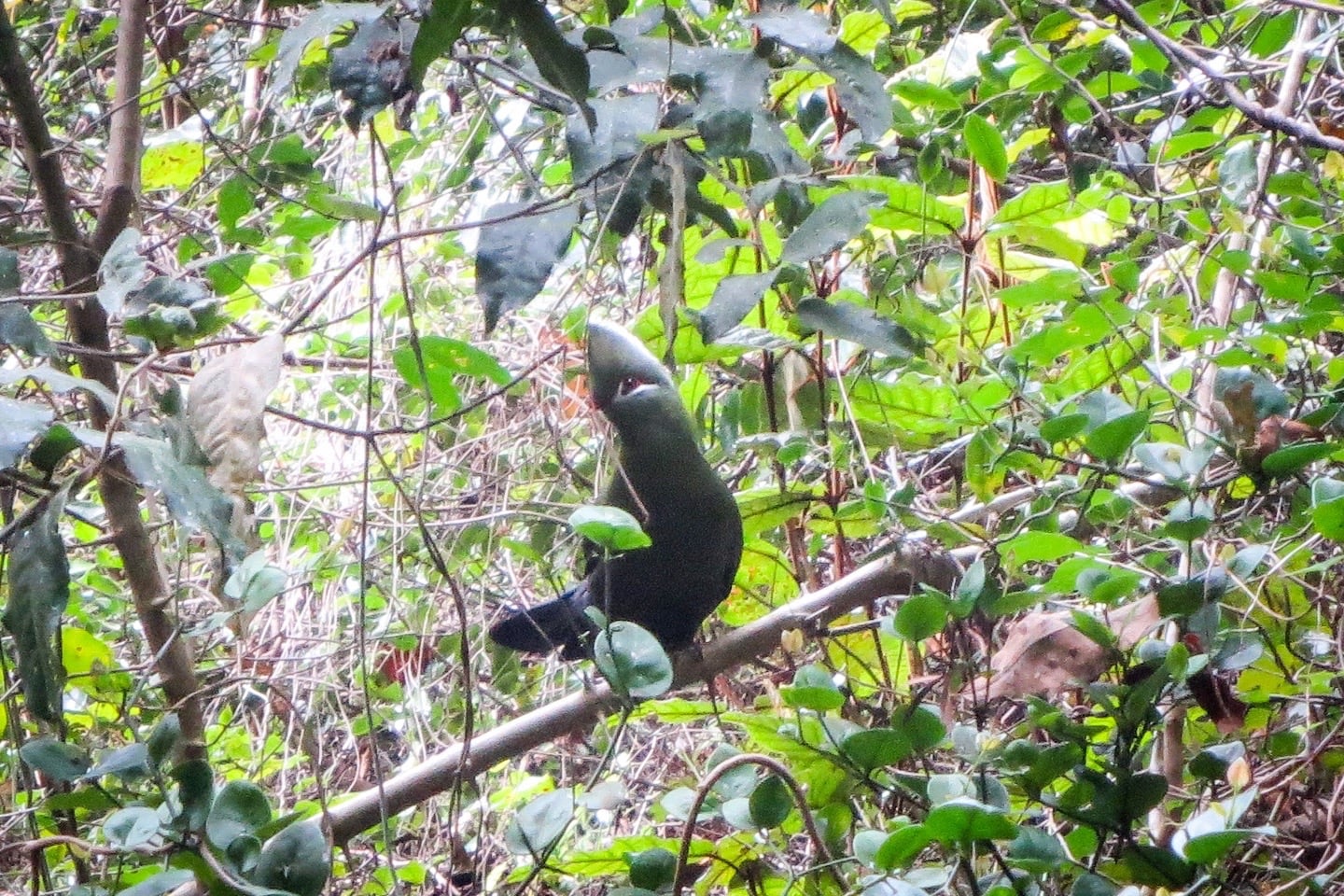 Lori and I had never been much into birding, but Lori’s really taken a liking to it lately. I do have to admit, seeing the Turaco did whet my appetite for bird spotting, but I think I’ll continue to be a dabbler. Lori, on the other hand, now has herself both binoculars and a Southern Africa bird book. Next thing you know, she’ll be working on her bird calls on long drives… 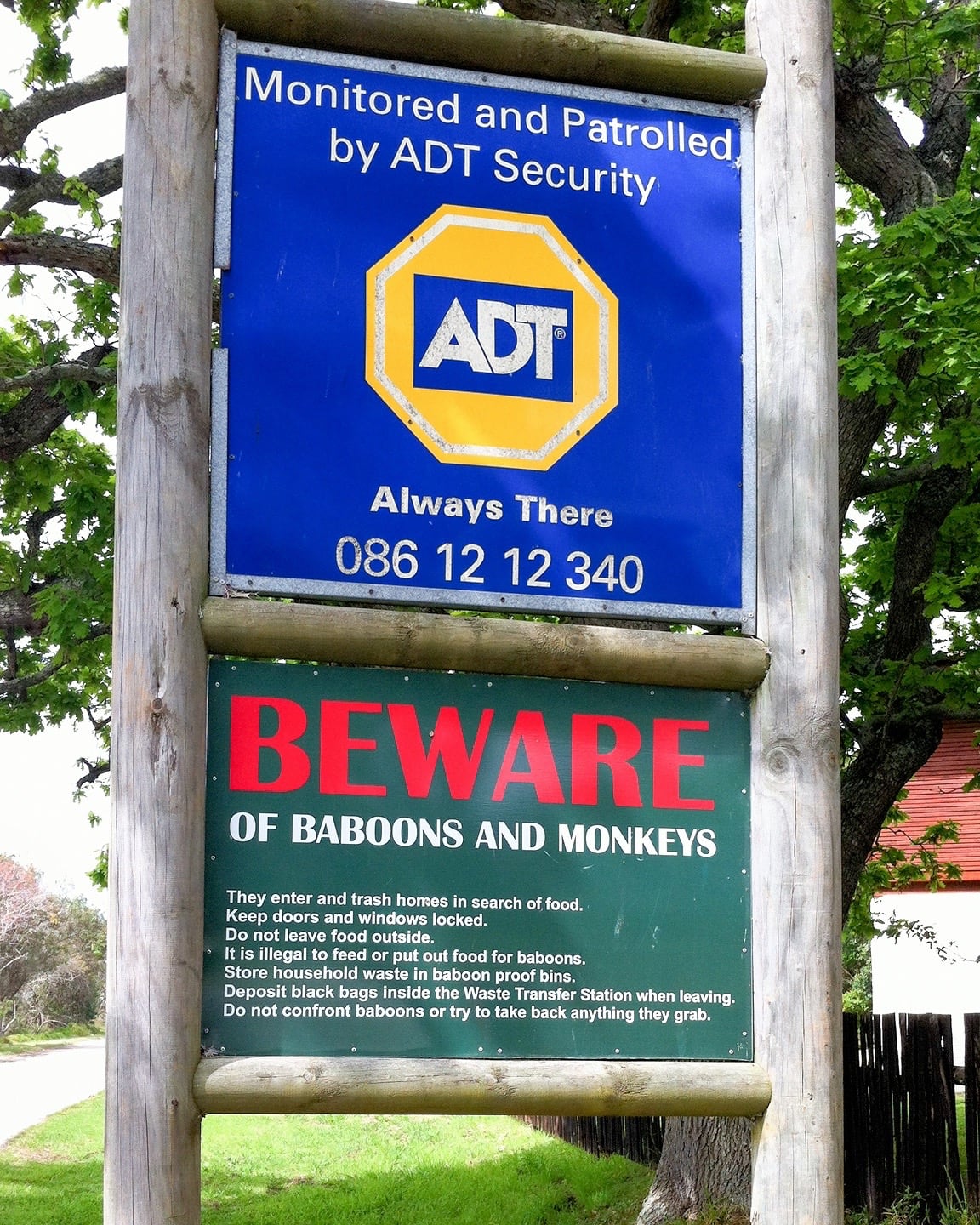 So, yes, baboons can be a real public nuisance, it seems. If my barnyard story hasn’t convinced you, read the sign above. My favorite is, and I quote: “Do not confront baboons or try to take back anything they grab.” Every time I read this it conjures up a very specific mental image that is just absolutely hilarious to me…wish you could be there.

Lori’s favorite sign in the park, however, was this one below. The crying deer is particularly moving. 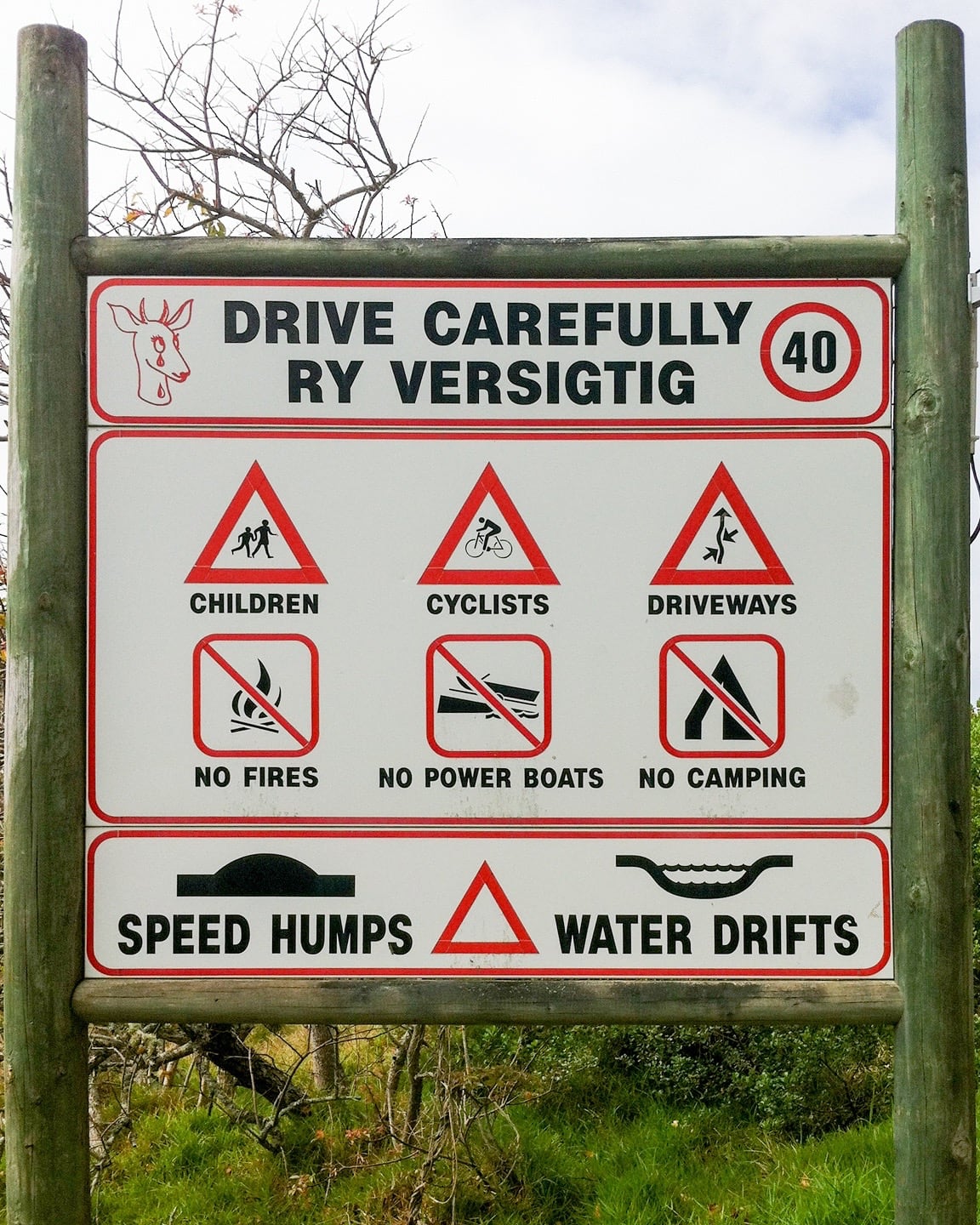 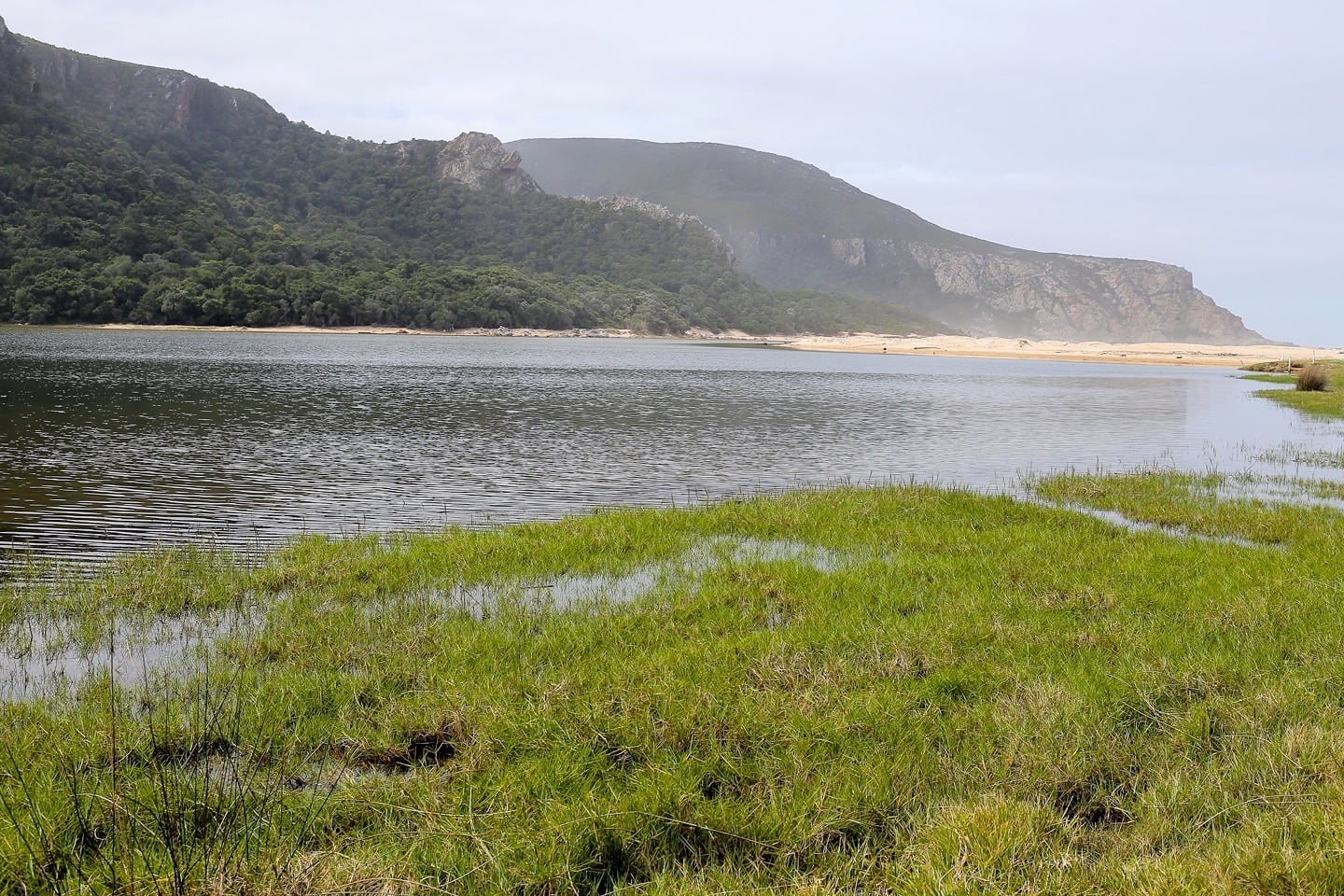 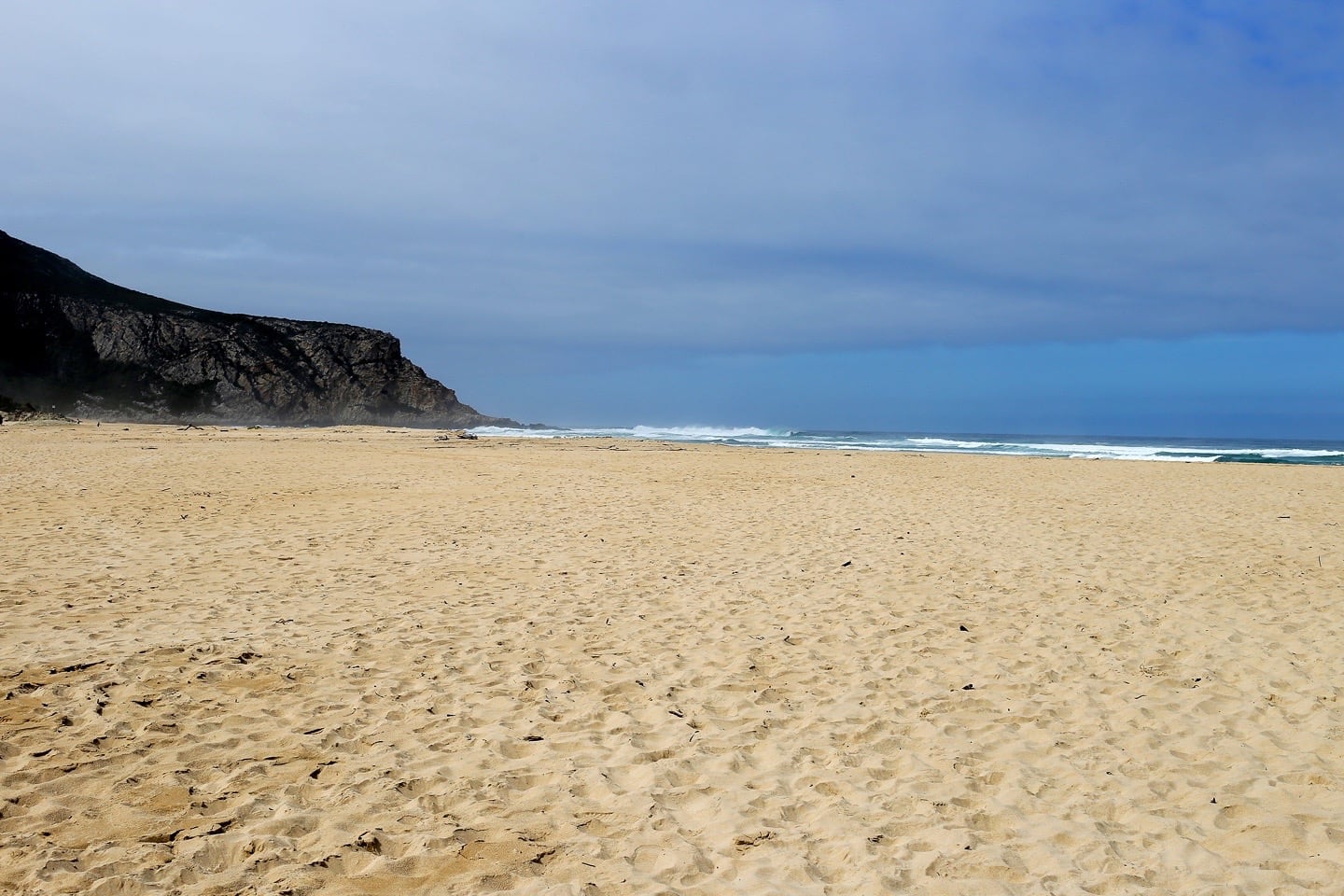 We reached the ocean just before noon, and like most of the long golden stretches of sand down here this time of year, it was mostly deserted. I couldn’t help but think back to Belize and how envious she would be of Southern Africa. One of the most surprising things about Belize to us was the lack of proper beaches like this one. Marketing photos of palm fringed, white sands islands aside, 90% of Belize’s coastline is mangrove swamp or silty, sea-grass. Placencia and Hopkins are the big standouts.

This beach also reminded us of the Oregon Coast a bit (but much warmer). We had forgotten, living in Belize, how much of a difference there is in these latitudes between low and high tide. 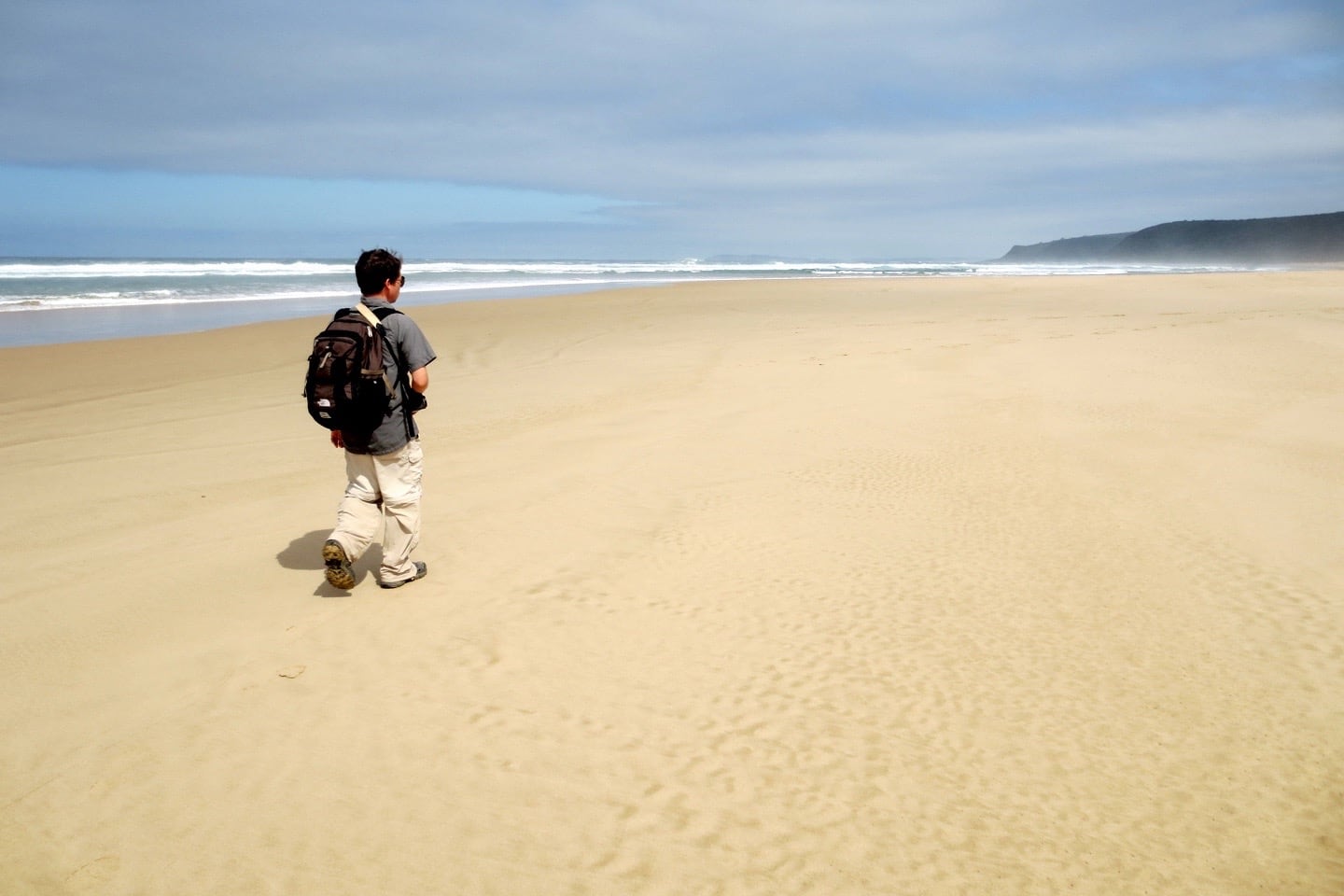 By the way, the water here was absolutely freezing, though outside temps did get hot enough to take off the ol’ pant legs. 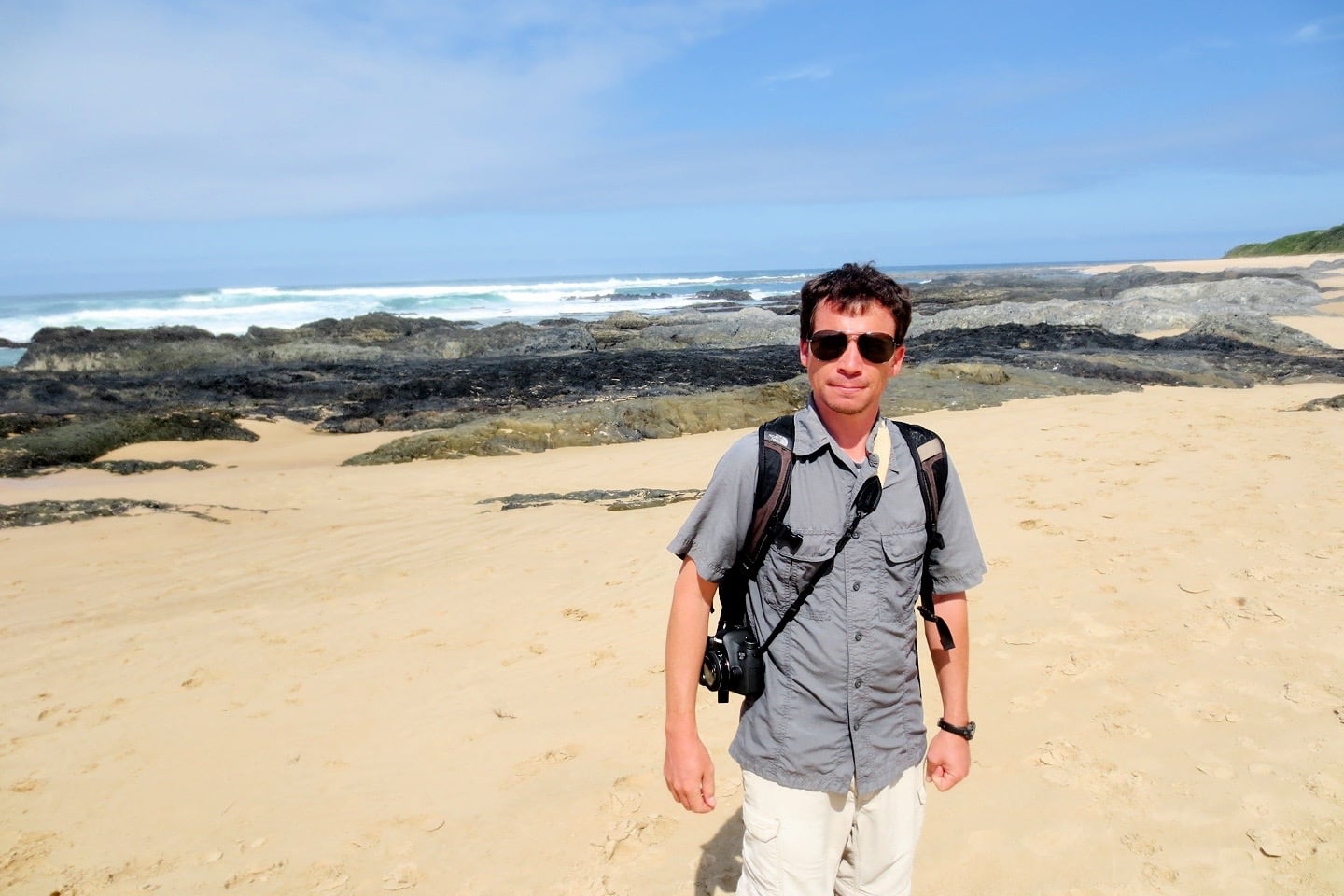 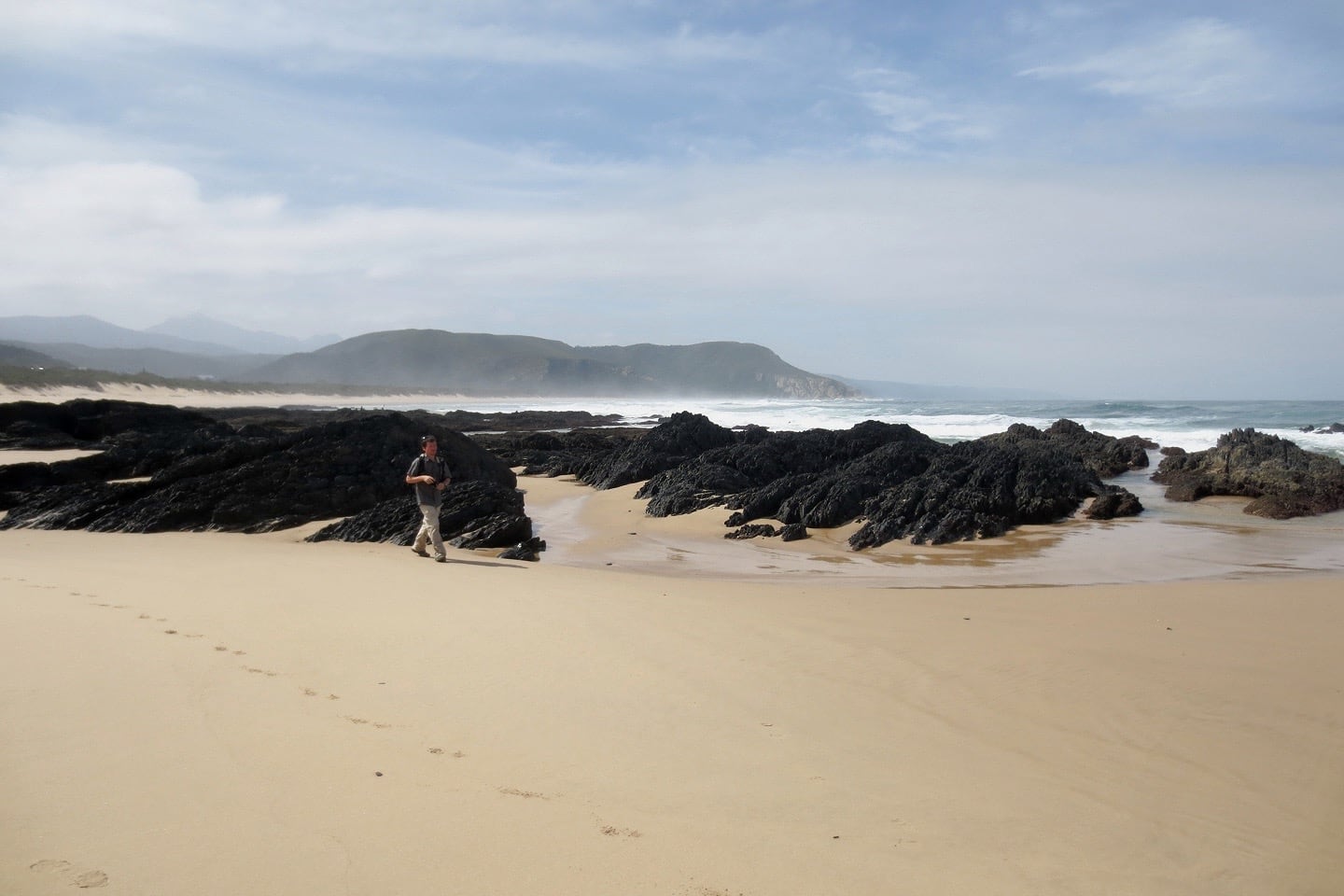 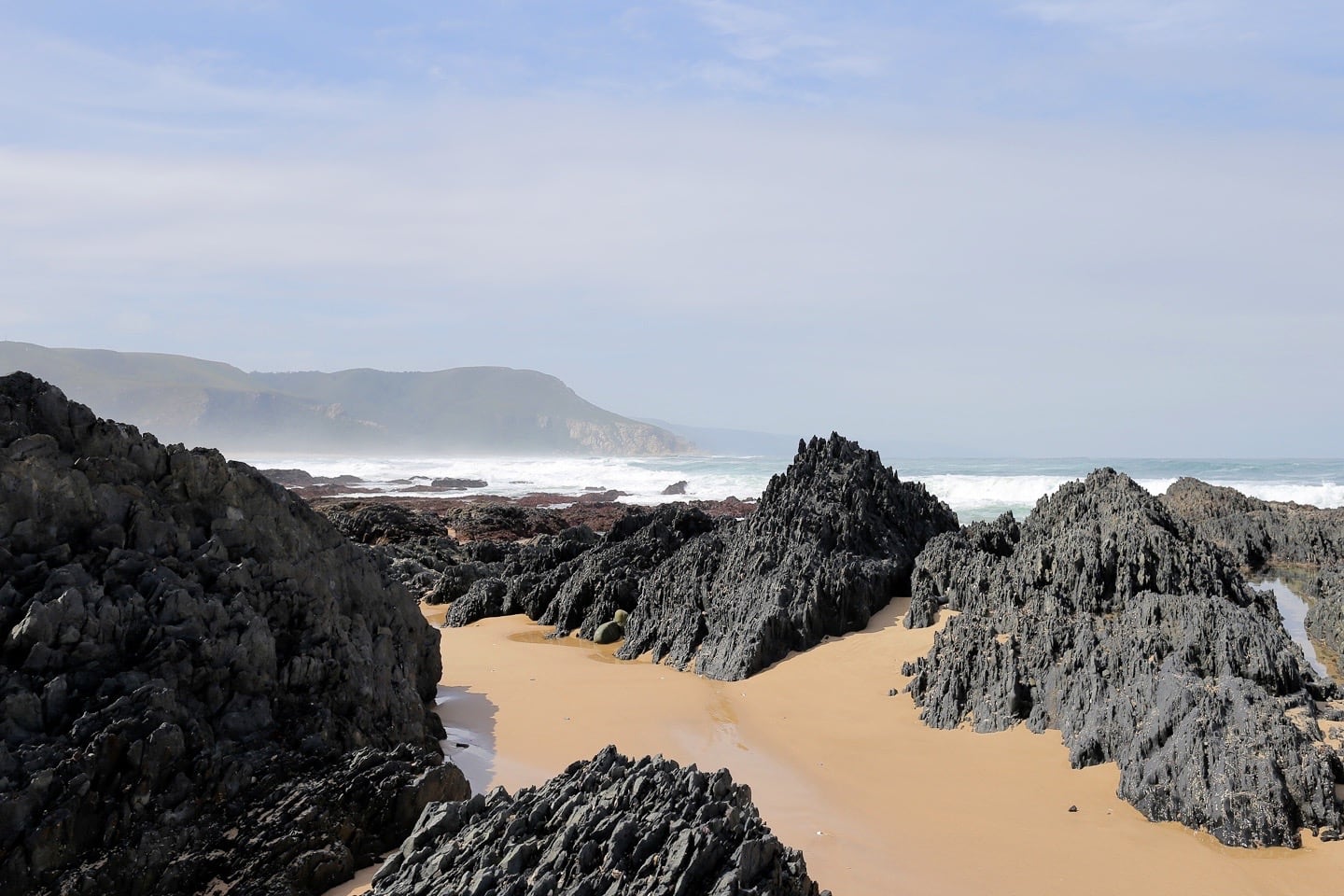 We decided to bypass the town entirely and clear the black rocks before the tide started rising. Truth is, we couldn’t see the town from the beach so didn’t think there was really anything there, but learned later that it was hiding behind the dunes all along. We got to the big black rocks and thought, “this doesn’t look so scary–you could totally do this at high tide.” The water line was well below the footpath and it all seemed a bit perplexing…but also too good to be true…and it was. 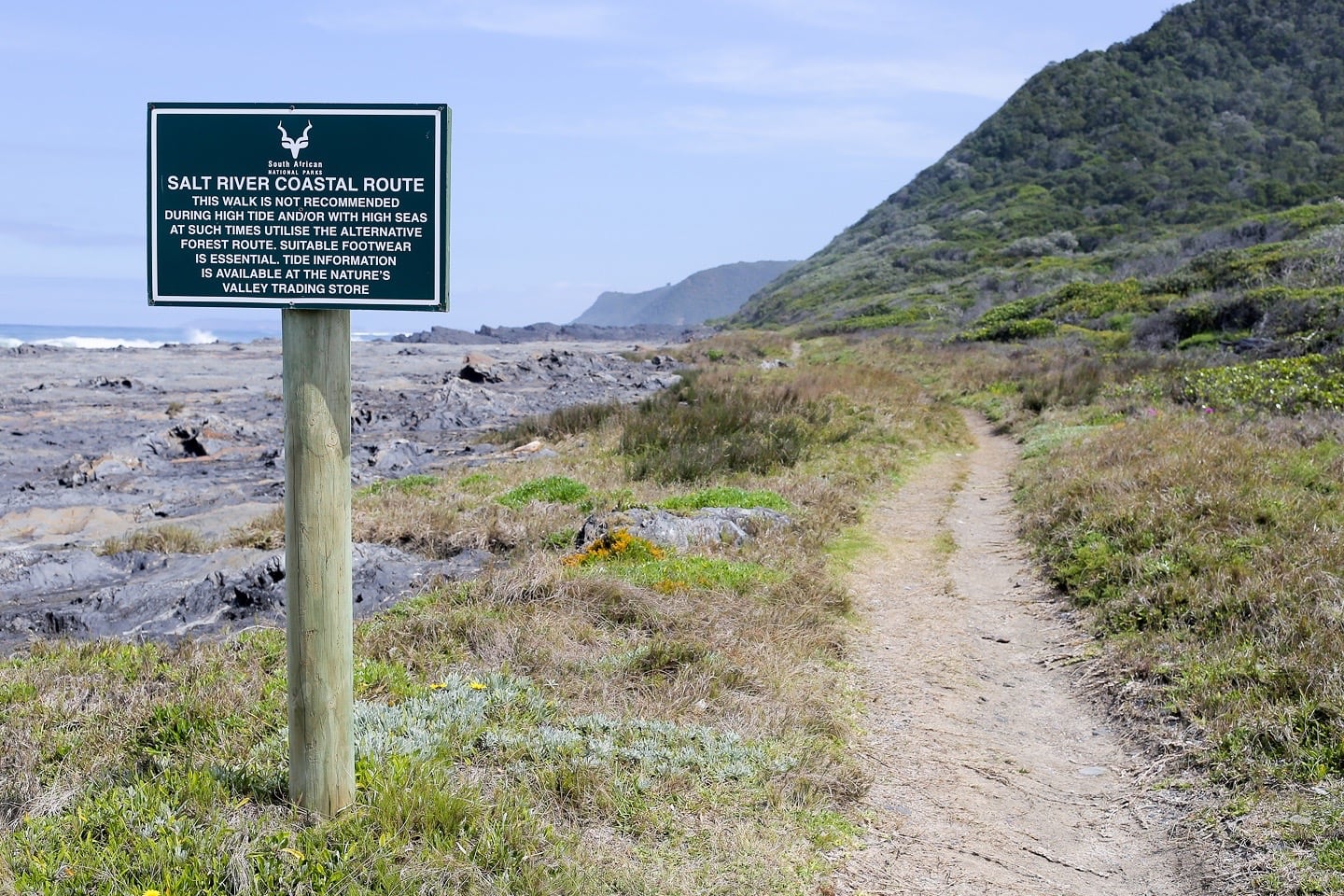 Minutes later, we arrived at the real party. 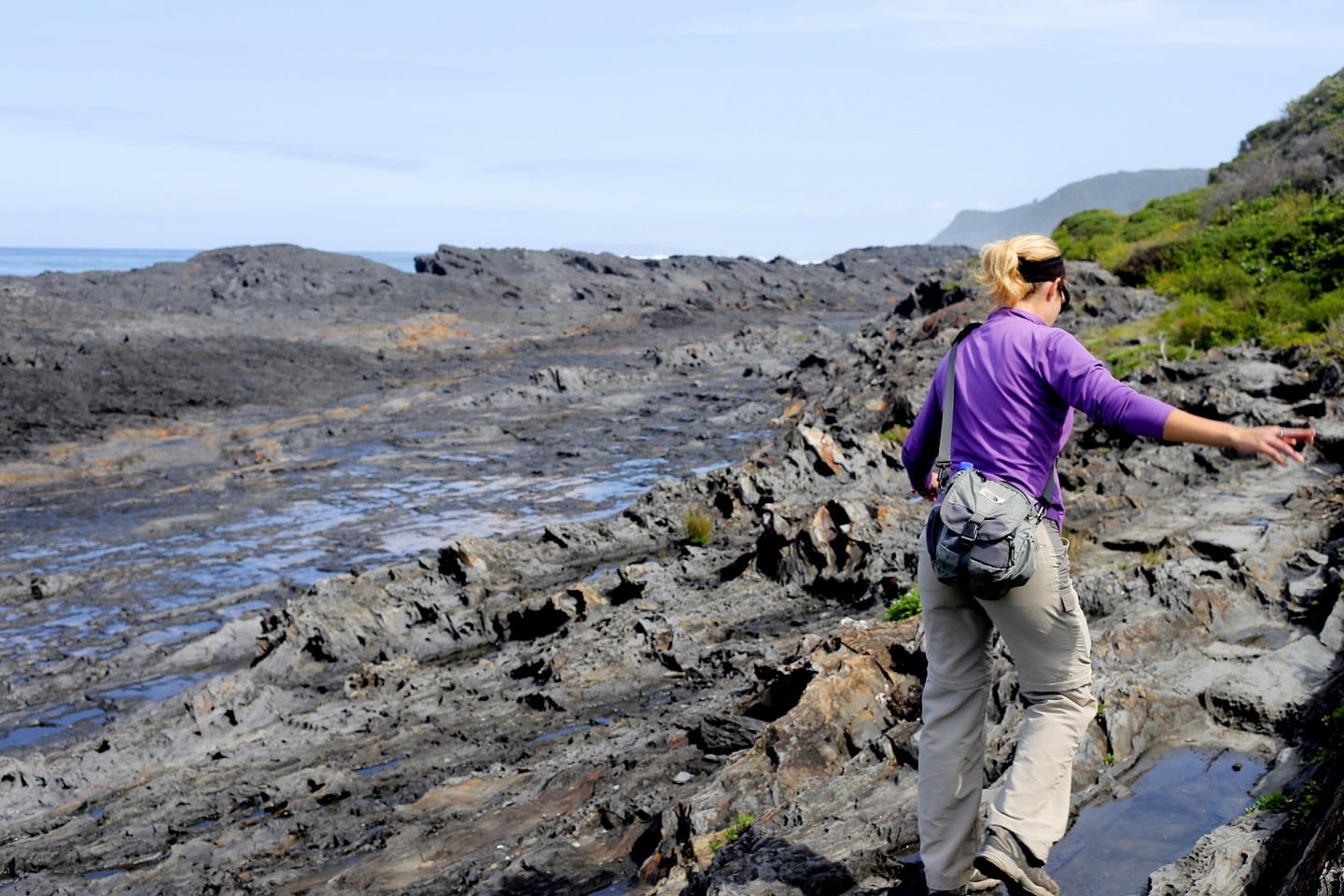 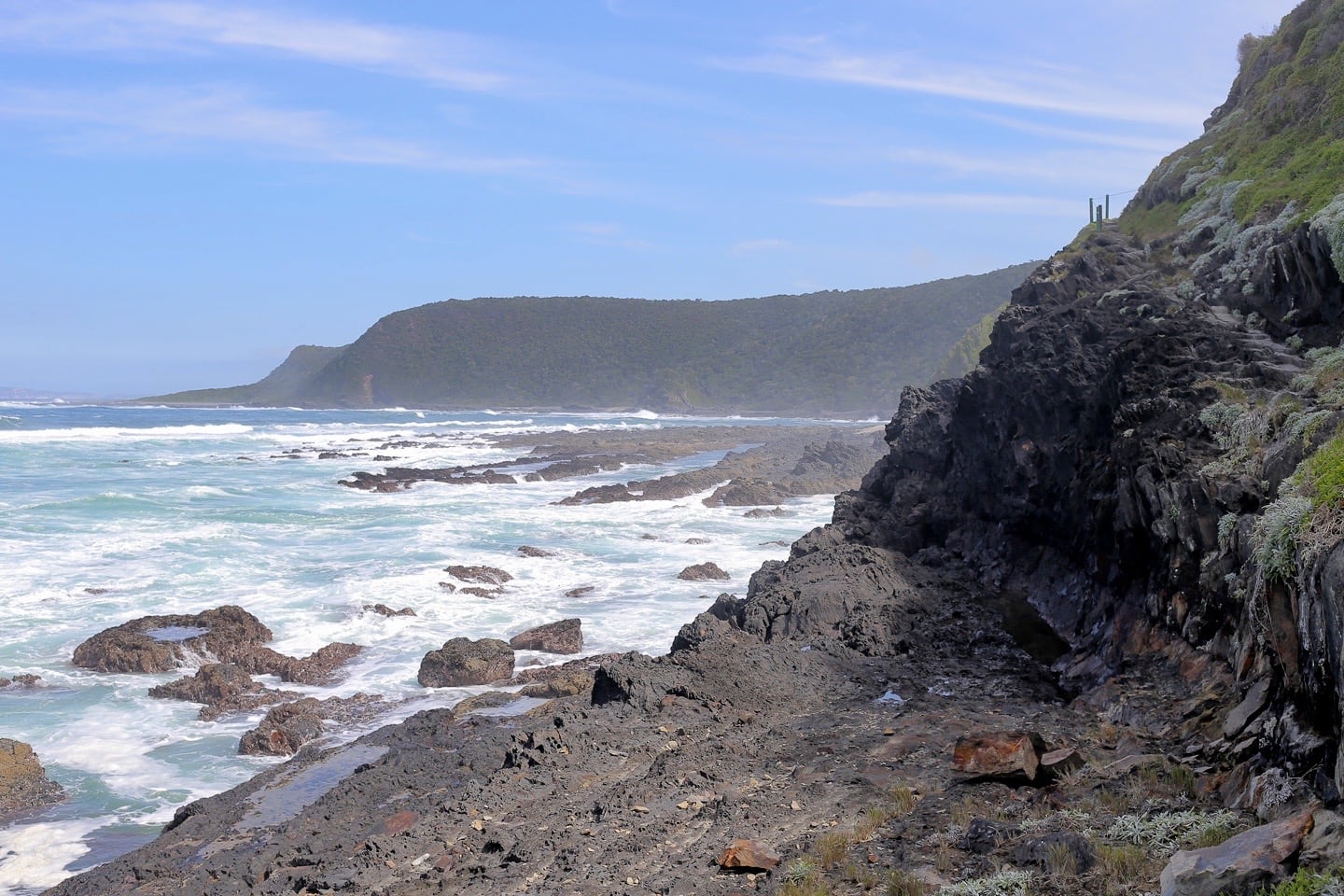 This is at low tide. You can see in the photo above that the path leads up these sharp and jagged rocks to a narrow path marked by a rudimentary railing which separates you from a sheer drop into foamy, rocky seas. 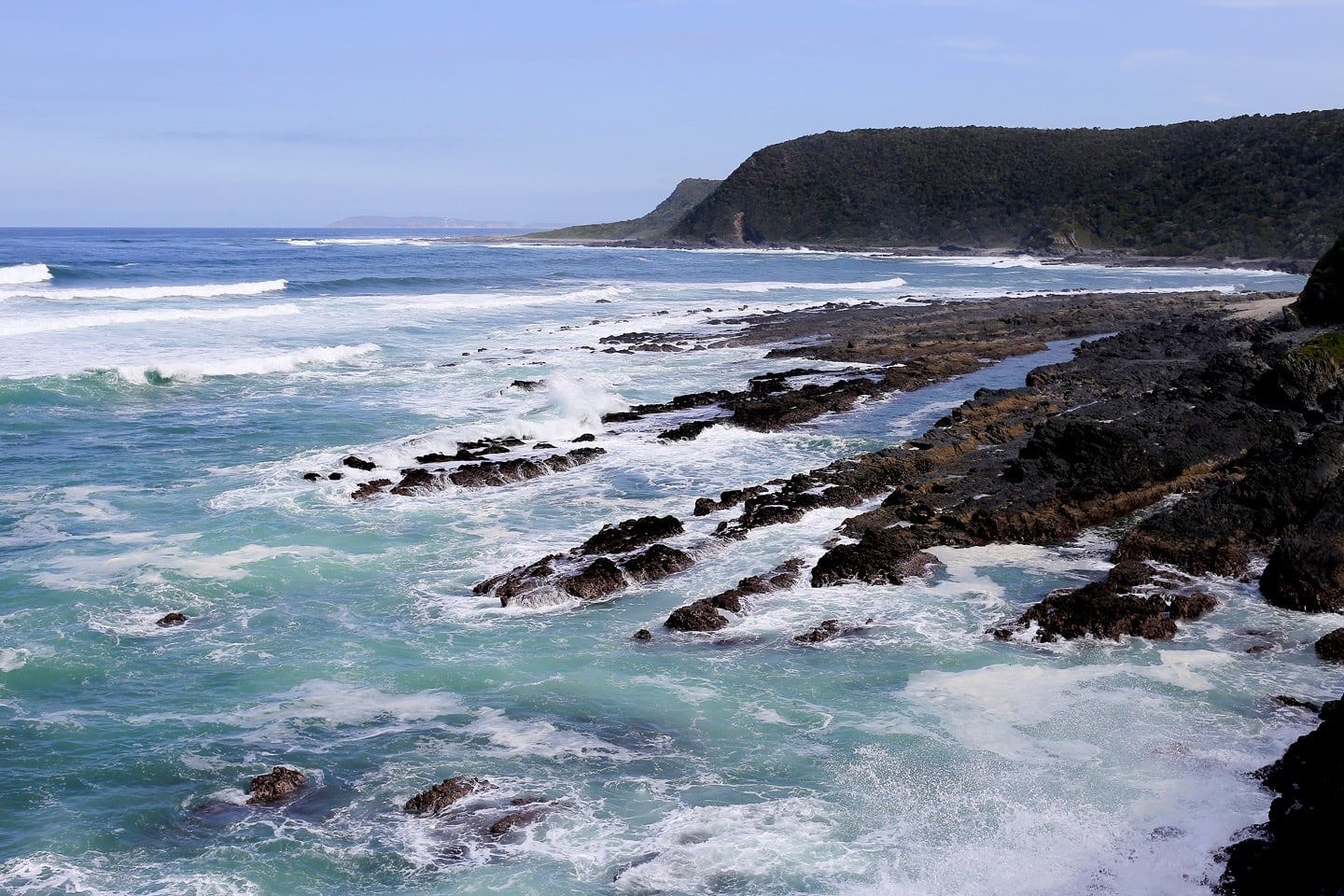 We hear that this is a great surfers’ beach…uh huh. I’m sure it’s totally bodacious. Call me crazy, but there’s just something about jagged shallow rocks and huge waves that seems really unappetizing to me. 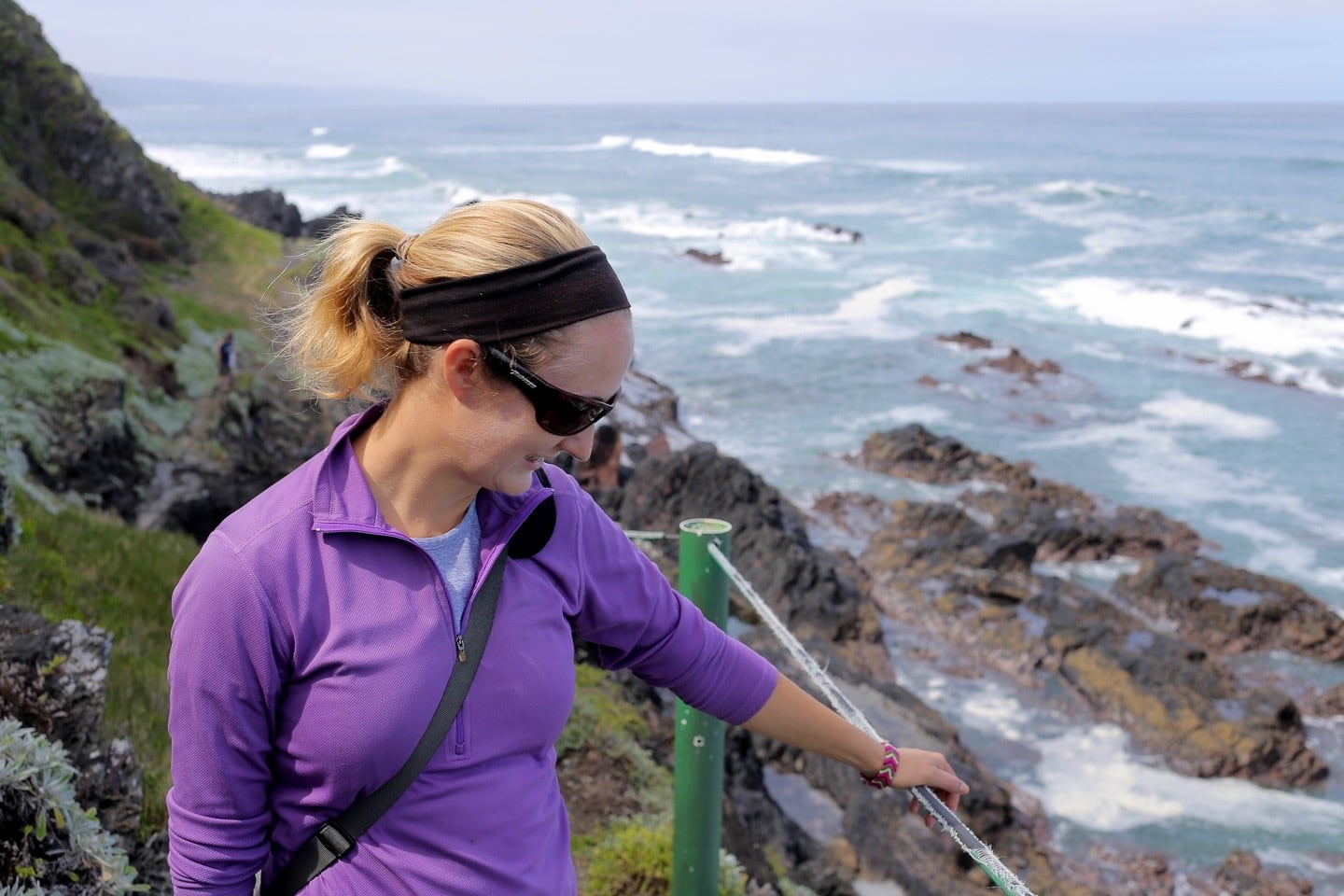 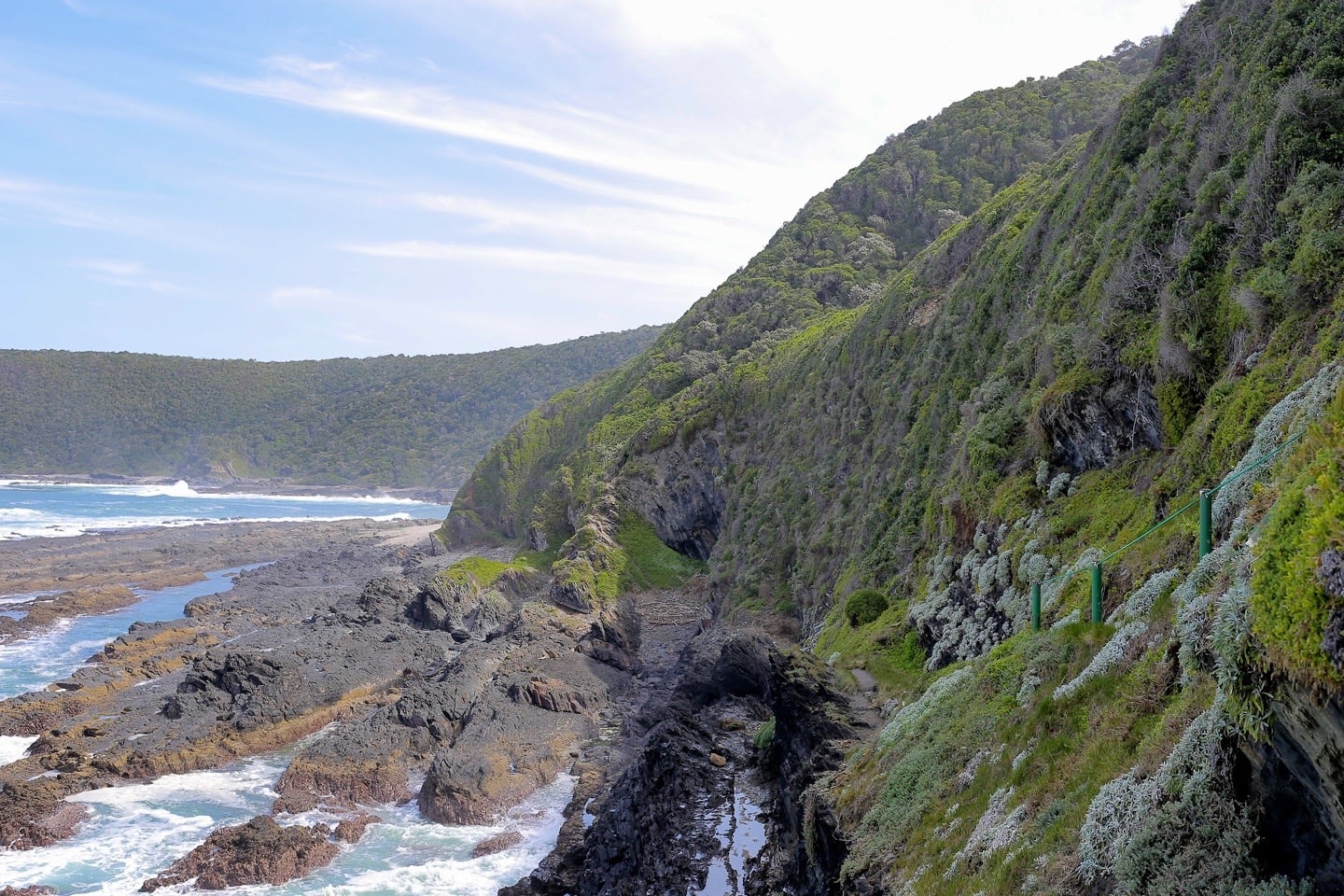 This part was especially fun. Do you see the path? I don’t. Yeah, it’s that area that just sort of falls into the sea. Good times. 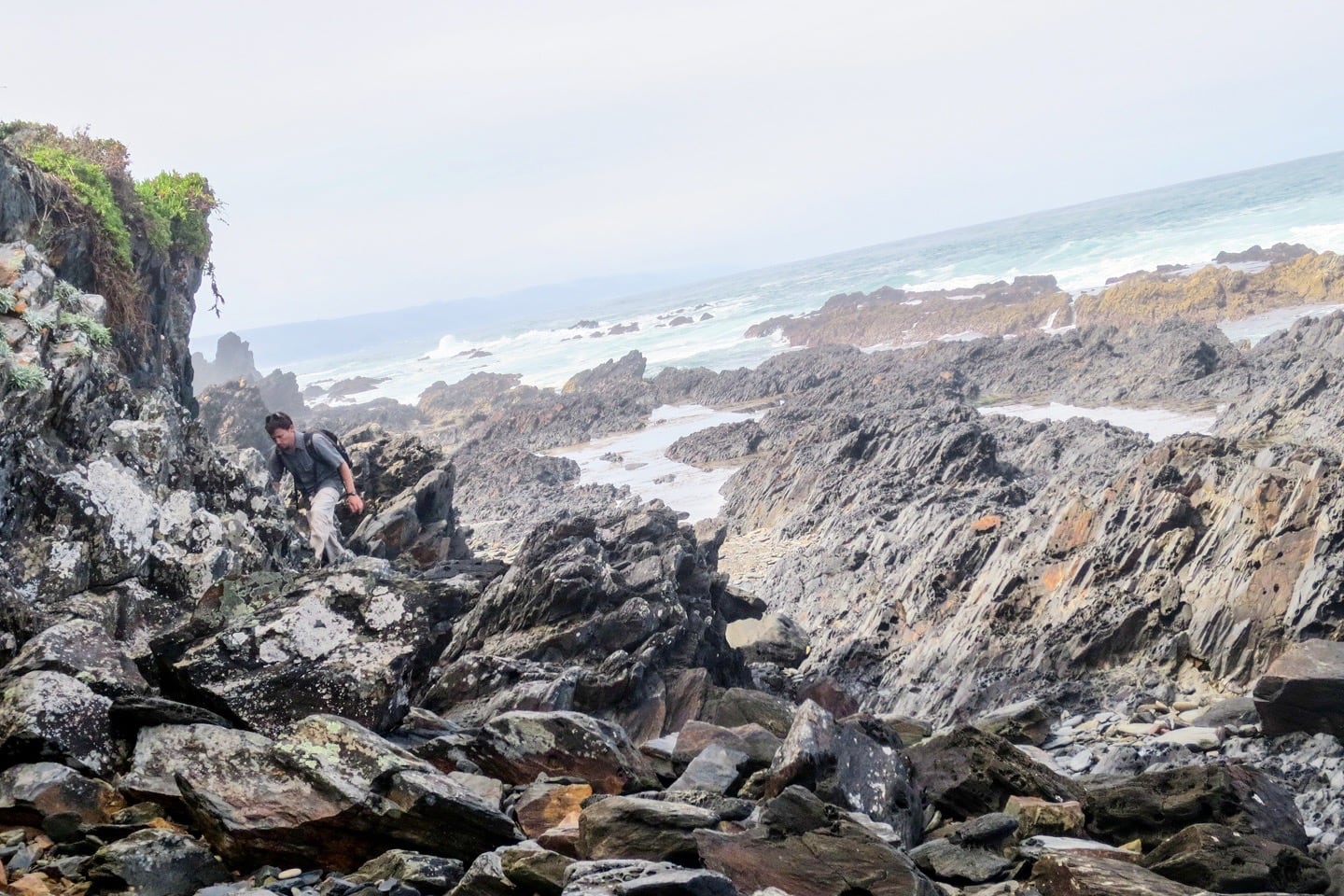 Finally, after clambering over many dark and ruthless stones we finally arrive at a place where all the rocks are just the opposite! Having cleared the time-sensitive portion of the hike, we break for lunch. 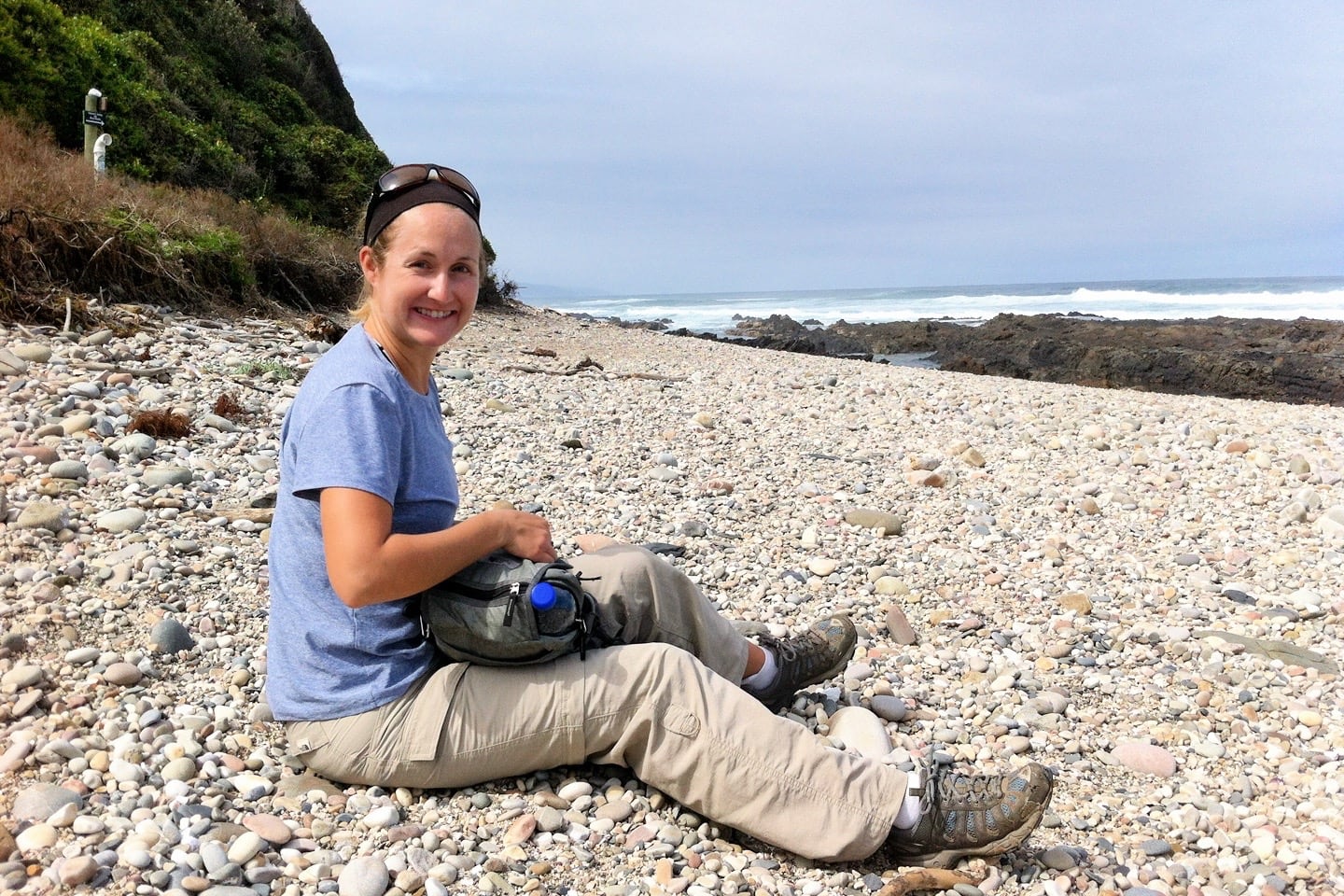 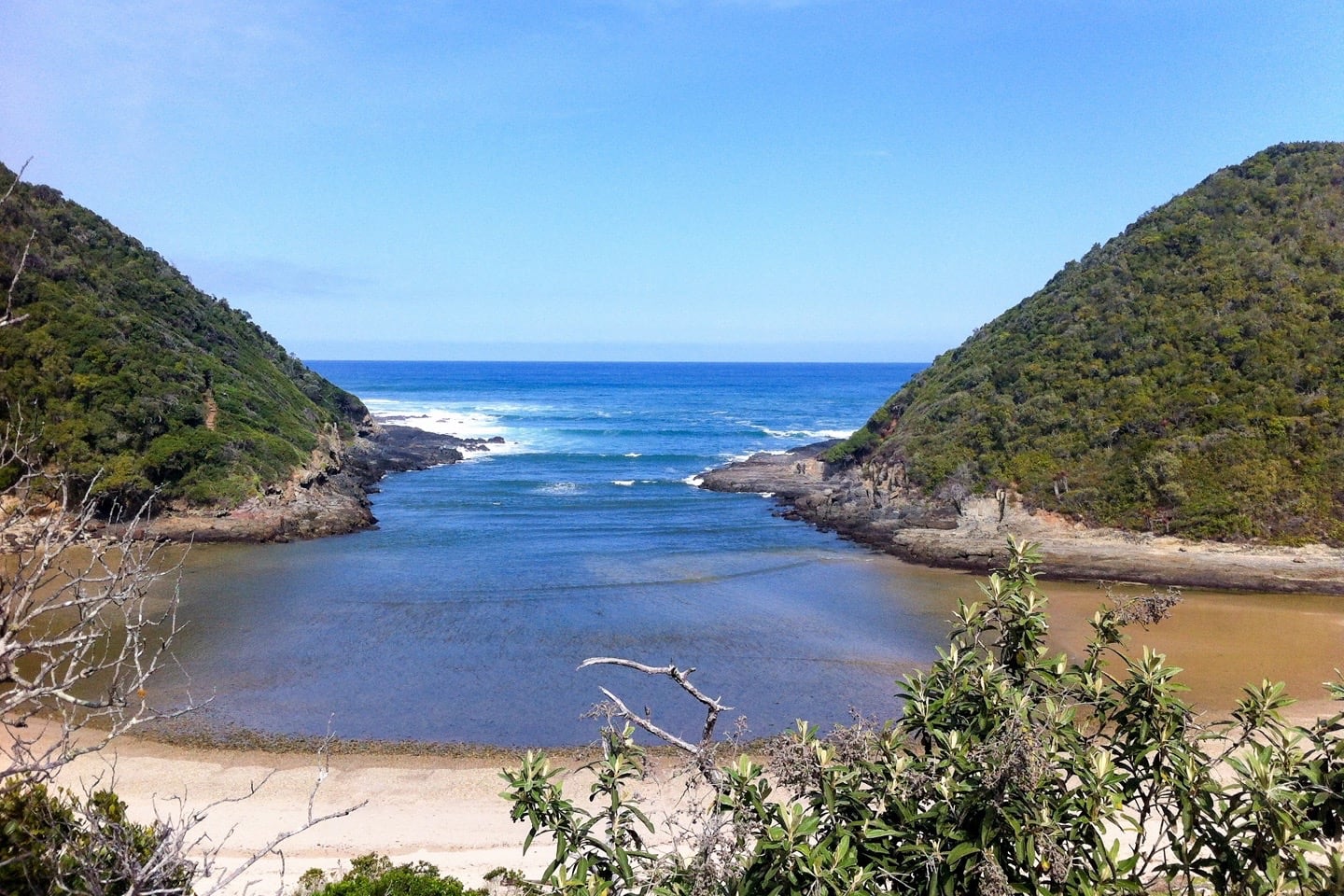 Once we found the trail, the return portion of the hike was fairly easy: A gradual climb back up into forest and meadowlands on a brilliant, blue afternoon. 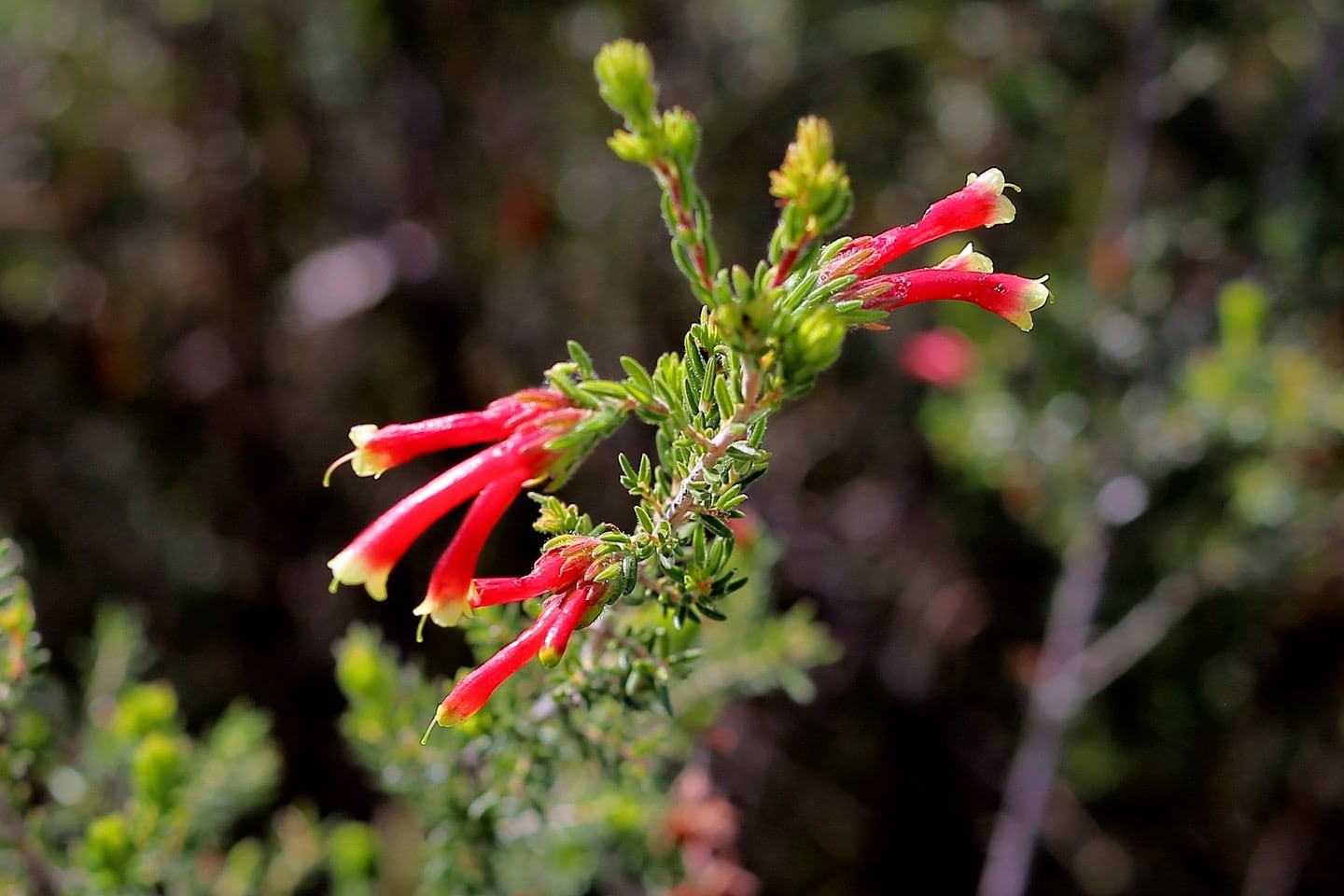 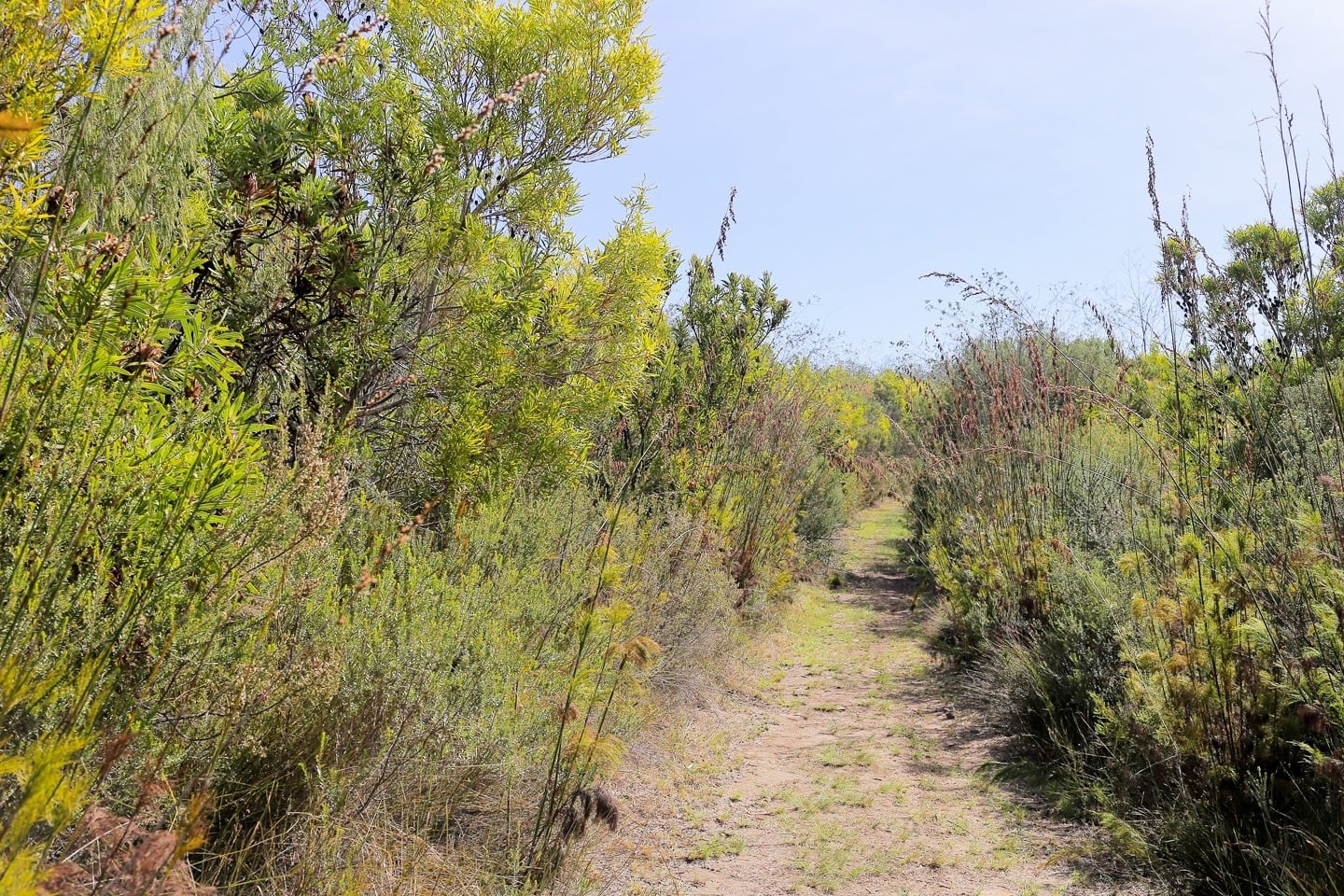 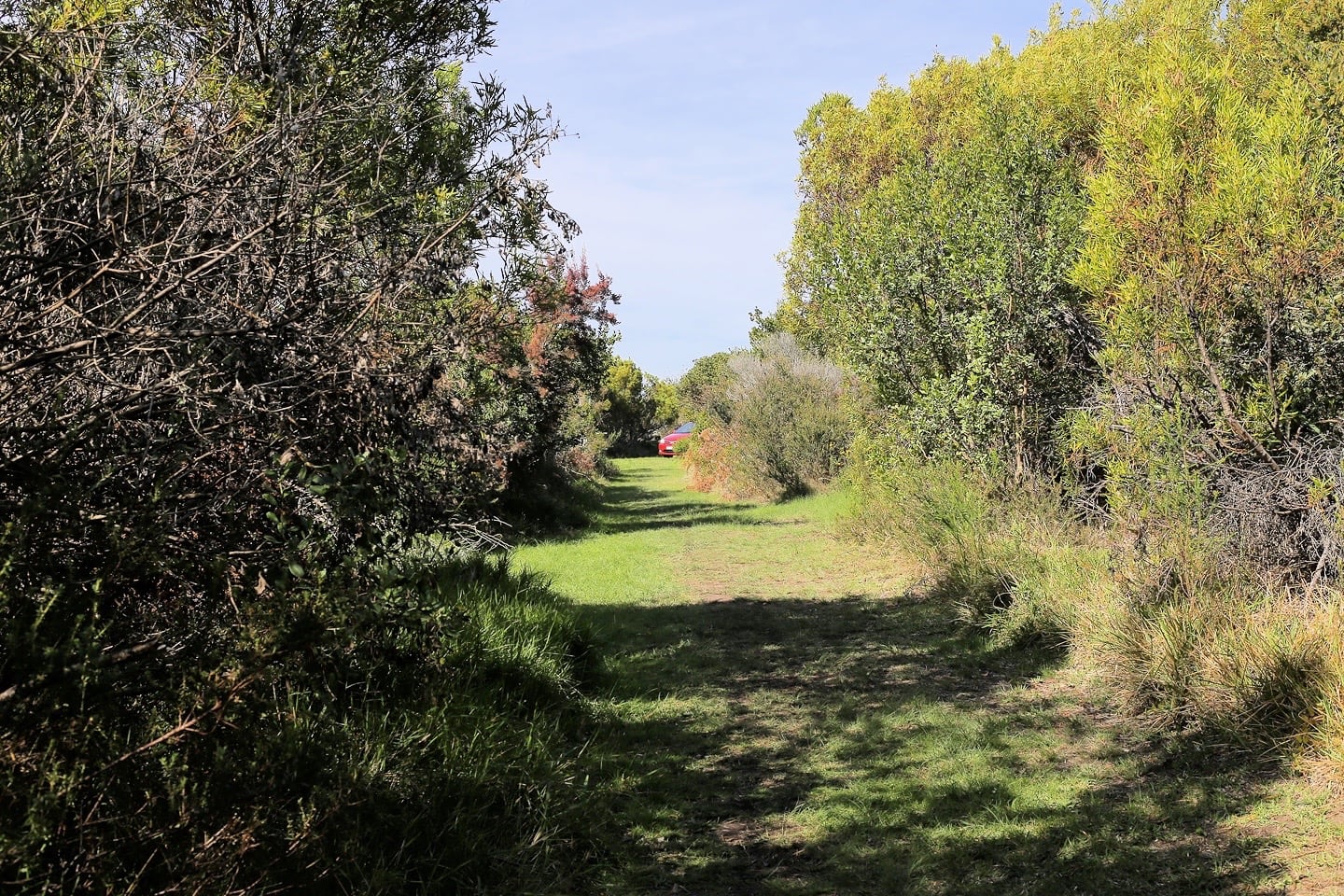 After about 4.5 hours we spot Mini Red at the end of the trail! Success!

While we were gone, however, it appeared that the baboons had visited the trash can next to Mini Red. Apparently they weren’t looking for bananas (it seems the bottles of alcohol were the only things the baboons were interested in…I’m not surprised.) 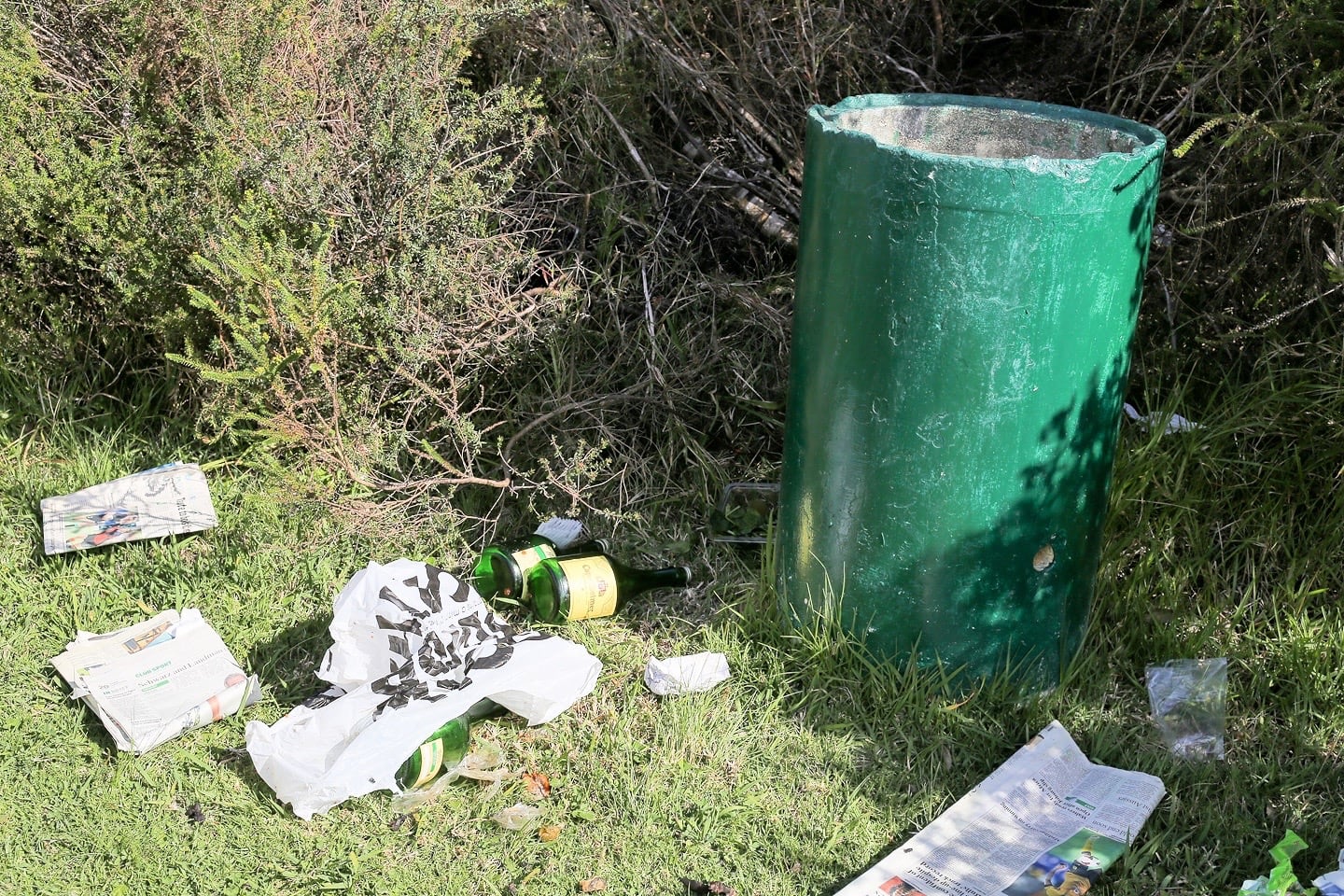 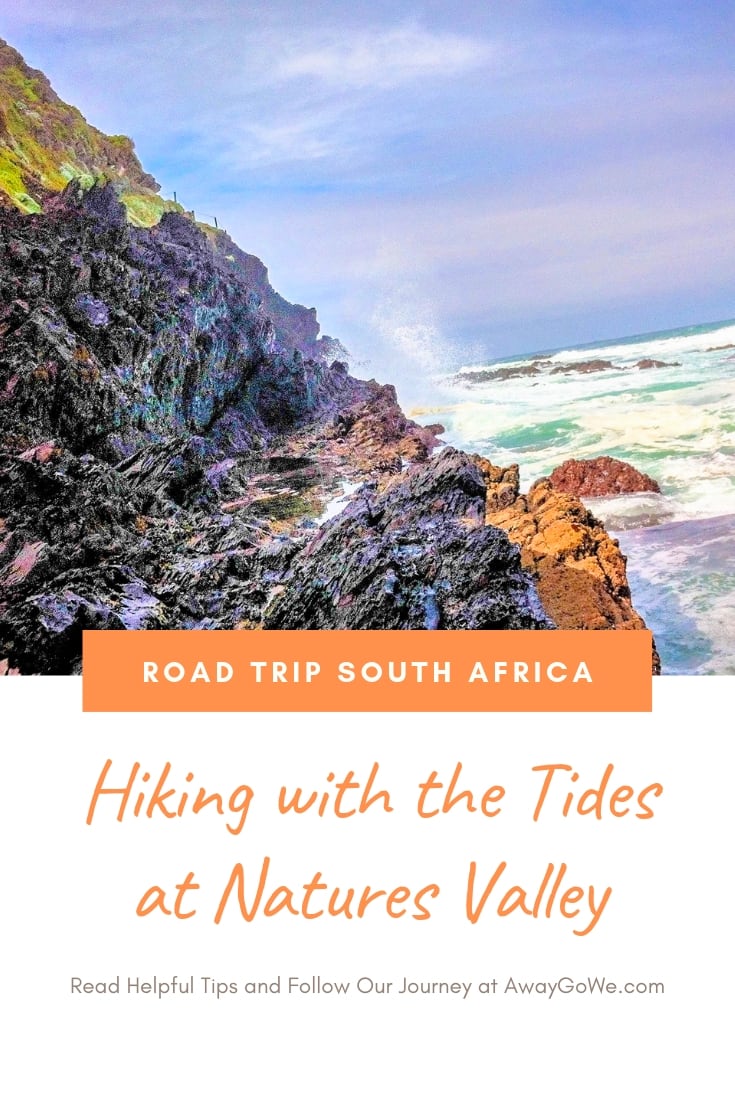