Taking a Bush Plane into the Jungle

Our experience taking a DHC-6 Twin Otter across Borneo’s northernmost region of Sabah, Malaysia from Kudat to Sandakan. 40 minutes in a plane won out over 10 hours in a bus over rugged terrain. 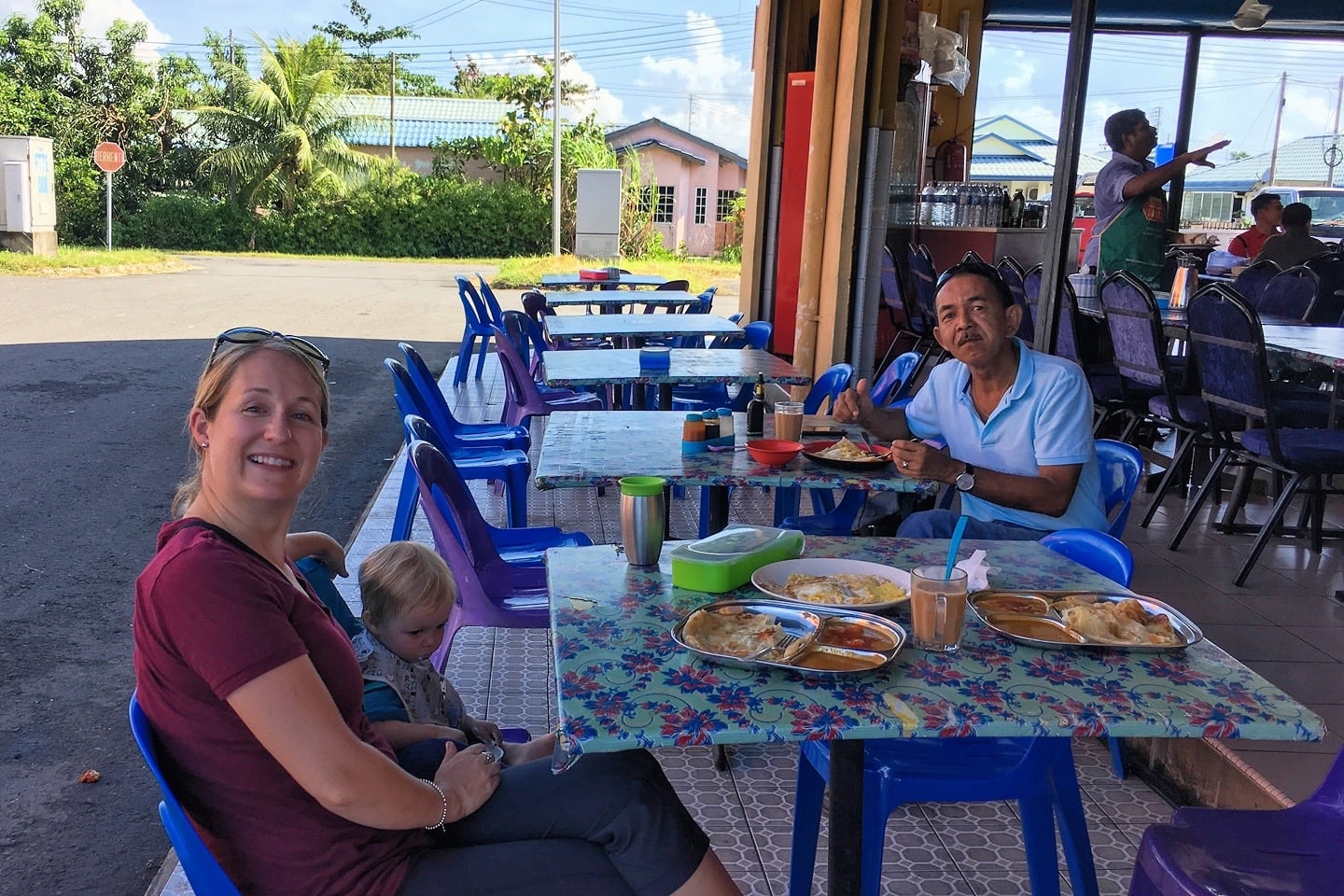 Mid-morning flights at bush airports are the best. You rise and pack at a leisurely pace, have time to enjoy a delicious breakfast, then off to the landing strip you go.

In addition to ferrying guests back and forth from Secrete Beach, the Sabahan owner of our guesthouse (Randy) runs a shuttle service between BorneoTip and Kudat town, about a 40 minute drive—which is a very good thing, given that Kudat is the gateway to all methods of public transport out of the Tip of Borneo region.

And, to top it off, our man knew just the place to go for breakfast—Restoran Mariam II—literally right at the end of the landing strip. Haven’t had an Indian breakfast this good since leaving India! And best of all, our breakfast was covered by a local politician who our driver dude happened to know. 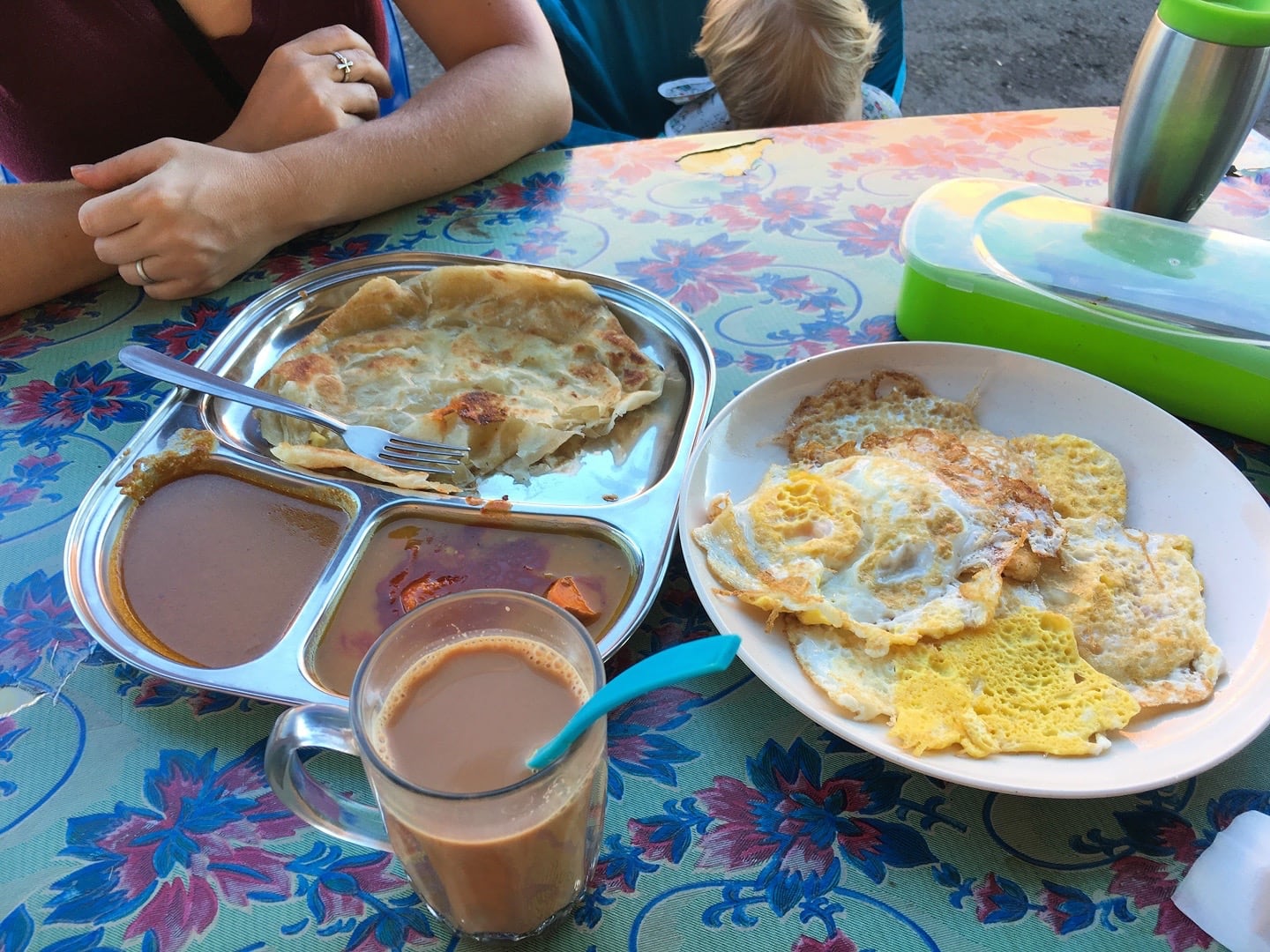 We weren’t even sure until a few nights ago if this was even going to happen. And weren’t even aware this route even existed until a couple nights before that.

After making the decision to nix the scuba trip portion of our vacation and reallocate that time to the Tip of Borneo, it was pretty clear how we were going to get up to the Tip, but not so clear how we’d get from there, clear across Sabah, to Sandakan, where we had put down a deposit on a three-day jungle trekking package at a midrange river lodge. The original plan (back when I was still planning on diving Sipadan) was to take the 5-hour daily express bus from Semporna up to Sandakan, then, fly back to Kota Kinabalu from Sandakan after we were done in the jungle. Done and done.

But now, we found ourselves on the other side of the state, with no clear way of getting to Sandakan. We’d already figured out it would be too expensive (and too far) to hire a taxi. In terms of public transportation, there no longer seemed to be direct buses that plied the route, only buses via Kota Kinabalu, which could take up to 11 hours. We found that many people rent cars and drive, as the route is supposed to be particularly scenic. But we couldn’t find any rental company that would let us pick up the car in KK and drop it off in Sandakan. Finally—and what seemed like the most obvious option—we would either fly or take a taxi from Kudat back to KK, then fly on to Sandakan. The problem with this last option was that—even with the two flights—it was still a lot of travel, to and from airports—and a lot of waiting in between.

Then, one night in KK, I got an idea. What if there’s a flight from Kudat to Sandakan, nonstop? I almost didn’t even bother looking it up online because it sounded too ridiculous. But I did anyway, and sure enough, there was! MASwings, Malaysian Airlines’ regional carrier, currently operates flights from Kudat to Sandakan on Thursday, Saturday and Monday, for US$26 one-way. We were traveling Saturday. Perfect! It all seemed too good to be true, and for a while, it was just that.

I went online to book the tickets. Four seats left—excellent.

I was seconds away from submitting my credit card info when I came across the baggage info. The allowances appeared to be considerably less than what we’ve had on AirAsia (which is modest to begin with). But then I came across info that contradicted my original info. In a nutshell, it would either cost US$80 if we go over the baggage allowance, or…US$1. Lori spent the next hour or so on the phone with customer service at MASwings, Malaysian Air and everyone in between. She got cut off a few times (either her credit ran out or the signal faded) and every time, got a new person with completely different allowance figures! Finally, she found someone who seemed confident enough for us—we took her name and info down, and wrote everything in writing, then called back and verified with another agent—and sure enough, a match! Everything looked good, so we proceeded to book.

We called back the airlines [again] to verify this, and sure enough, all the seats had been booked just in the past 90 minutes we had been working on this.

We were pretty bummed, to say the least. Such an elegant solution to a complex problem, and we were so close.

We decided to head off to bed and deal with choosing an alternative in the morning. I spent half the night awake trying to think of ideas and stewing over the whole thing.

In the morning at breakfast, something compelled me to try the search again—and sure enough, FOUR SEATS AVAILABLE.

I got online as quickly as I could to book the tickets. It looked as though we had it in the bag. Then, payment. I submitted my card details—denied. My credit card company had blocked the payment due to fraud concerns. I called up the company and lifted the block, then proceeded to try again. TWO SEATS LEFT. Crap, it’s happening all over again. What if the card doesn’t work? I didn’t want to take that chance. So, I did what any desperate person would do in this situation—I turned to PayPal. I submitted payment and—success! We were on our way to Sandakan!

I scanned the reservation making sure everything was in order and came across the words:

Ha. Noe’s going to love this. 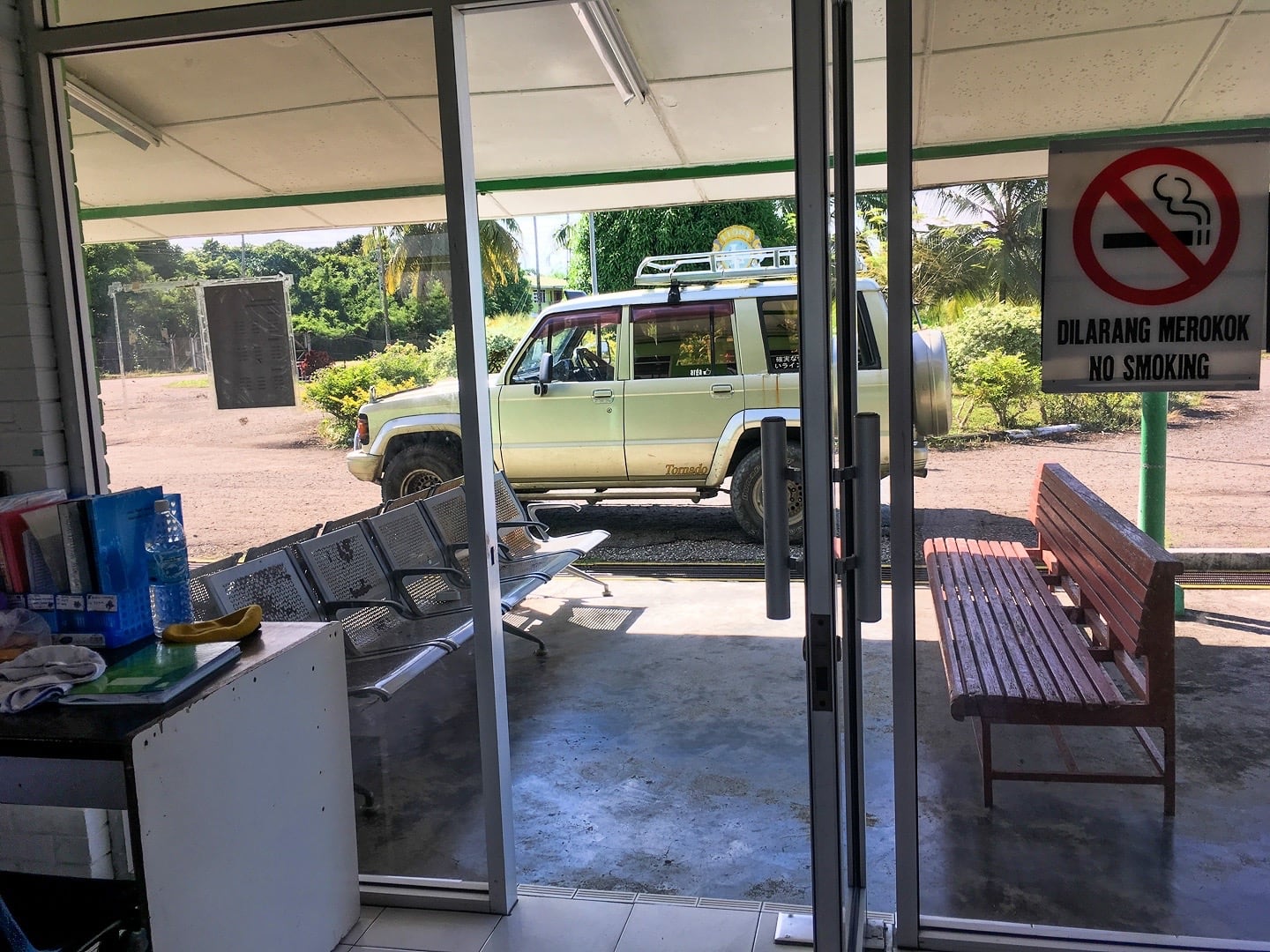 Back at the Kudat airport (can I call it an airport?—more like a grassy landing strip with an outbuilding), we bid our new driver/hotelier friend goodbye, and proceeded to check-in, which consisted of handing over our passports so that the officials could copy the information into a hand-written ledger, then off to the scales—our luggage…and us! 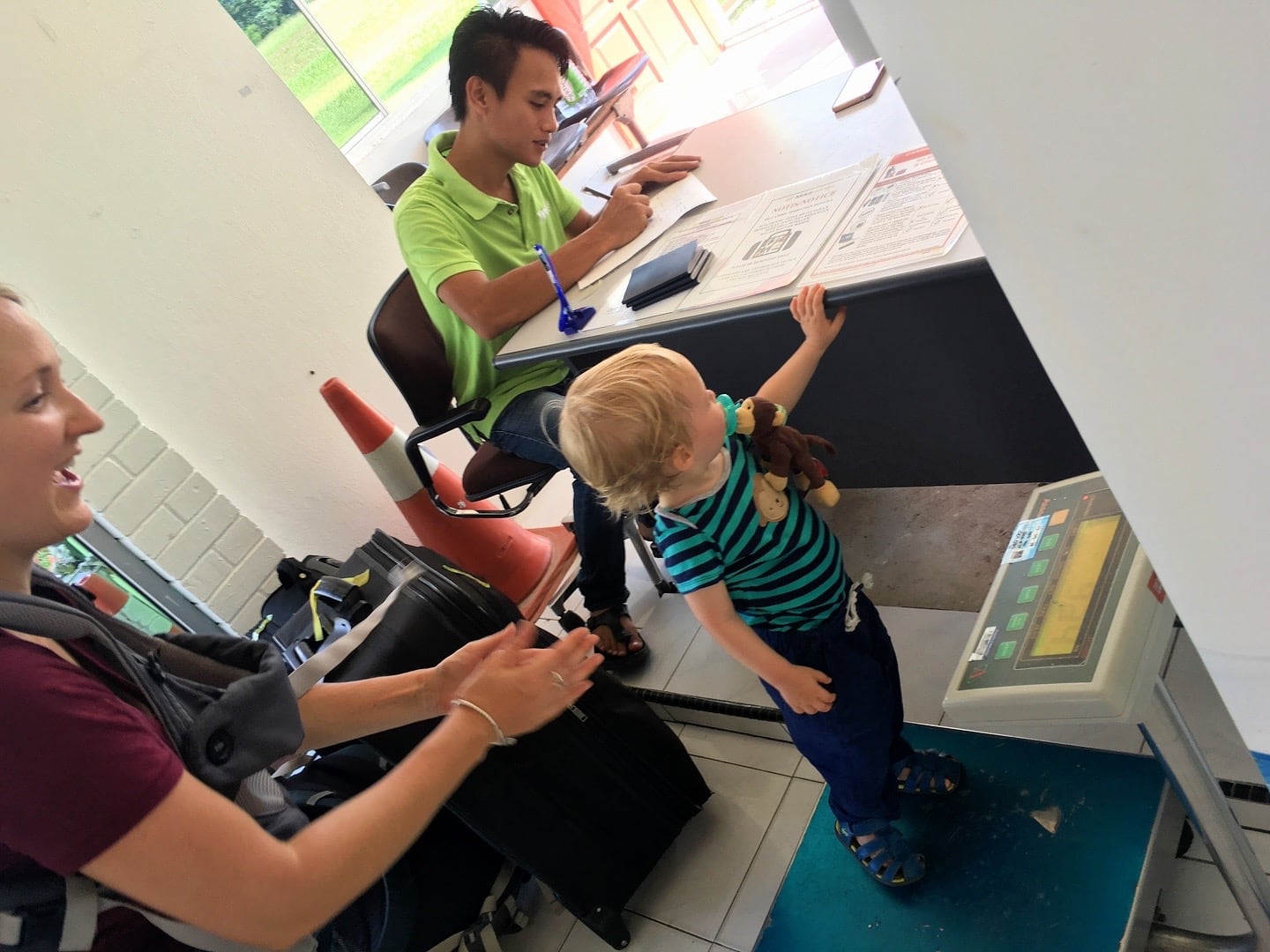 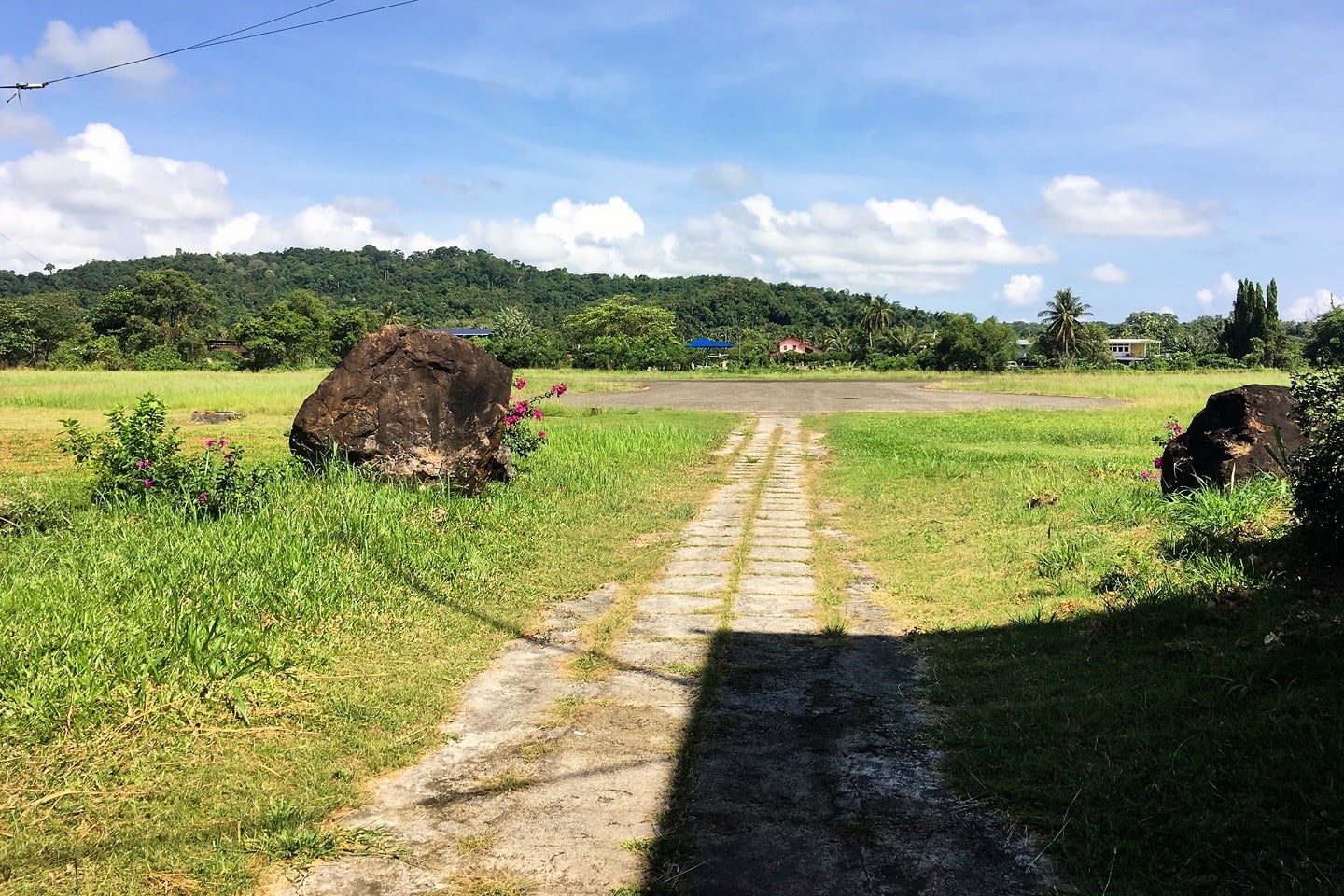 And, at the end of that square of tarmac is…the landing strip!

While still in Kota Kinabalu, booking our tickets from Kudat gave me renewed motivation to try and help Noe with the flying anxiety he had picked up so far on this trip. I knew that this next flight would be quite different than the previous ones and wanted to make sure he enjoyed it (as much as he possibly could, at least). While napping one day, I paid a quick visit to a mall near our hotel and poked around a few bookshops, finally stumbling upon this… 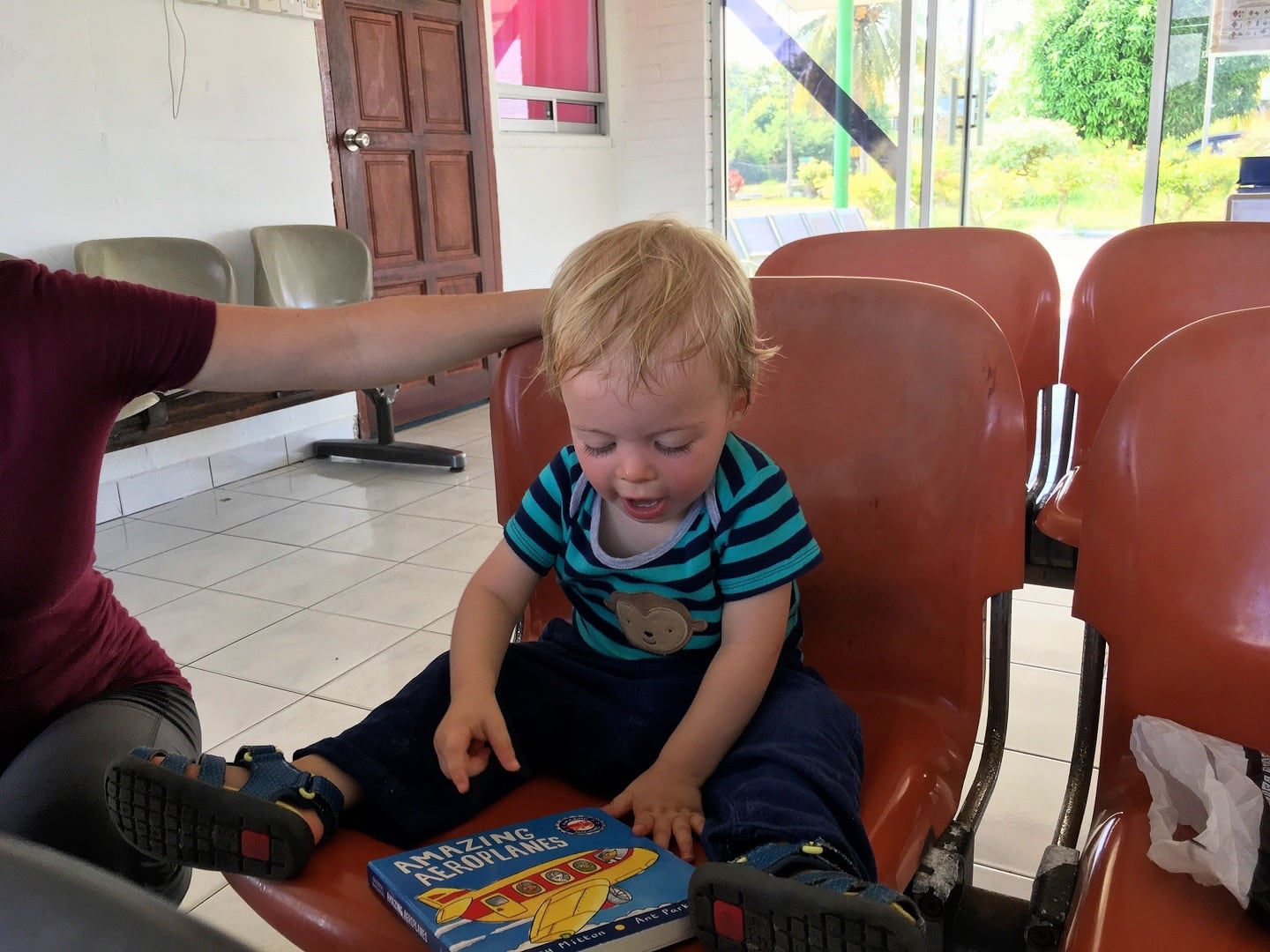 “Amazing Aeroplanes,” which led you through the entire process of flying, from beginning to end—animated in whimsical fashion—it was exactly what I had been looking for.

Right there in the Kudat airport, we brought out the book for the first time, and Noe ate it up, and it remained his favorite “toy” throughout the rest of the trip.

A short while later, our ride lands, and out goes the luggage. 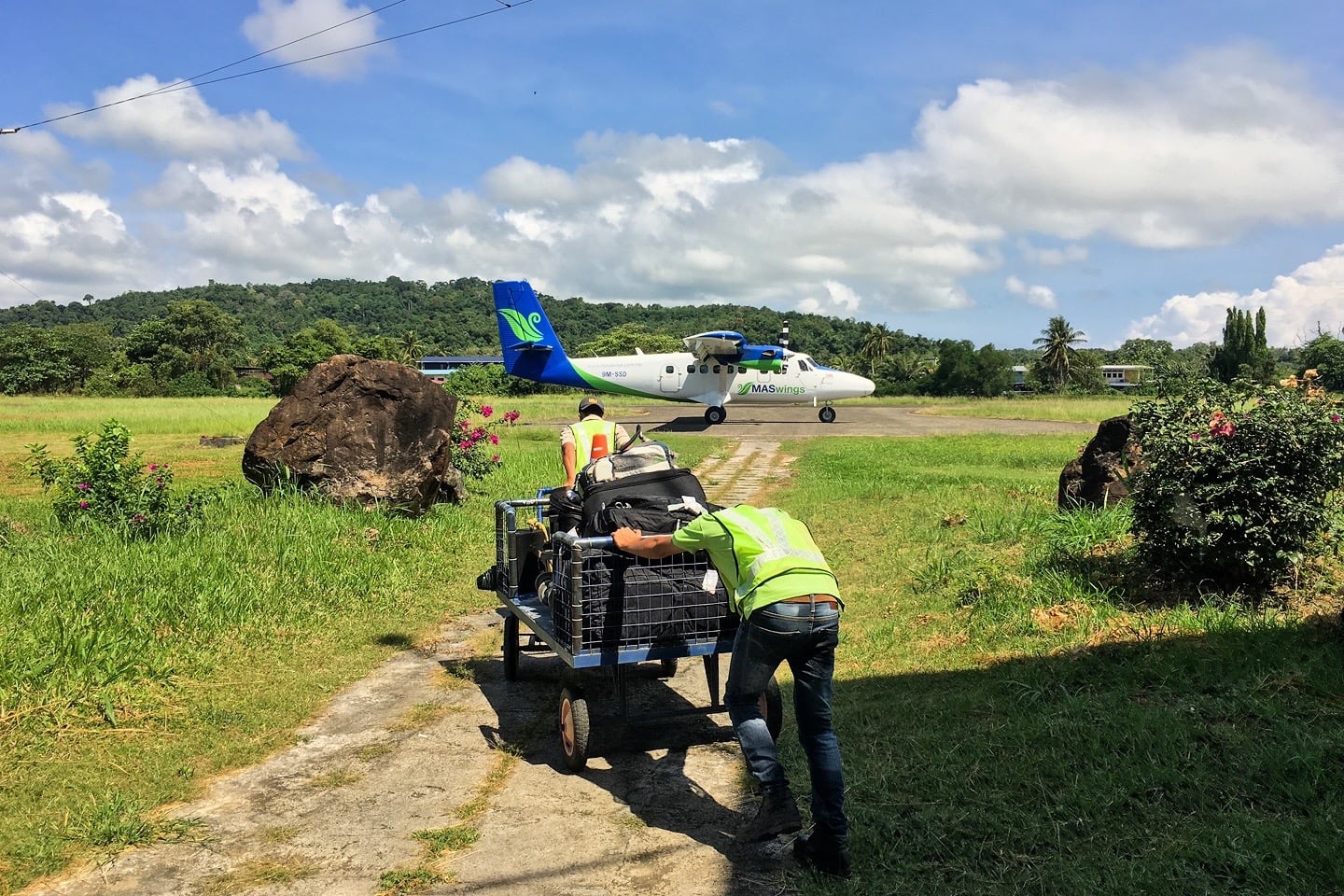 The de Havilland Canada DHC-6 Twin Otter. One of the finest bush planes ever to grace God’s green Earth—and one of the smallest I’ve been on in decades. Known for its STOL (short take off and landing) capabilities, there are but 16 airlines that currently operate these puppies in the entire world—not including charters, private owners, and military.

The DHC-6 is an old aircraft, being largely produced from 1965 to 1988. However, in 2008, Viking Air restarted production after a twenty-year hiatus and began producing the 400 series aircraft with an assortment of upgrades, including a glass cockpit. MASwings is unique in that it is one of only five airline operators in the world using the modernized Viking 400 variant.

Want more fun Twin Otter trivia? The DHC-6 has an impeccable safety record, but for a handful of incidents—one involving a fatal crash in 2013 upon this very landing strip—MASwings’ only major incident to date. 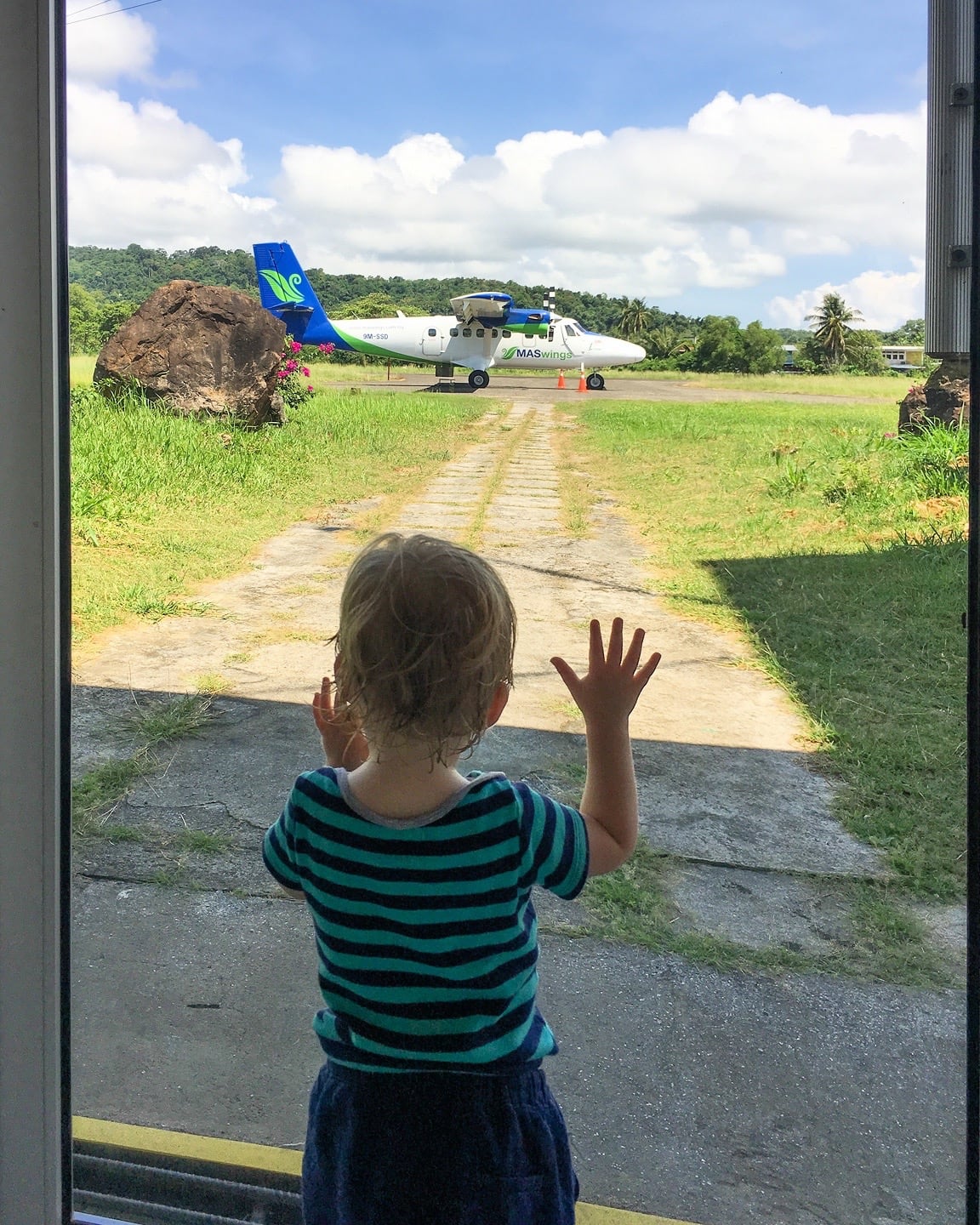 The only other passengers in the “terminal” on this particular day happened to be a Croatian couple with a young daughter. Noe and the girl seemed to hit it off right away. Maybe it’s the blonde connection. 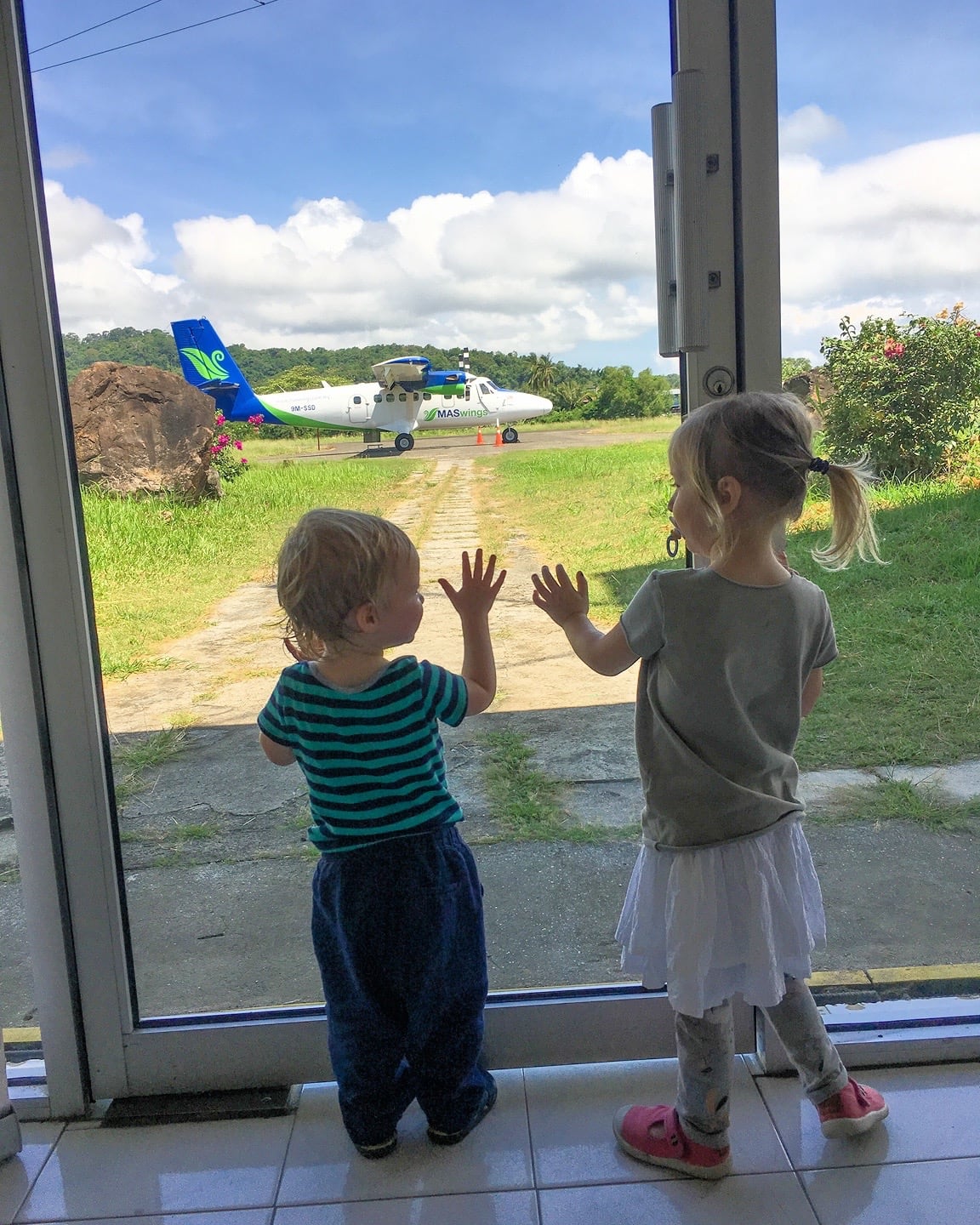 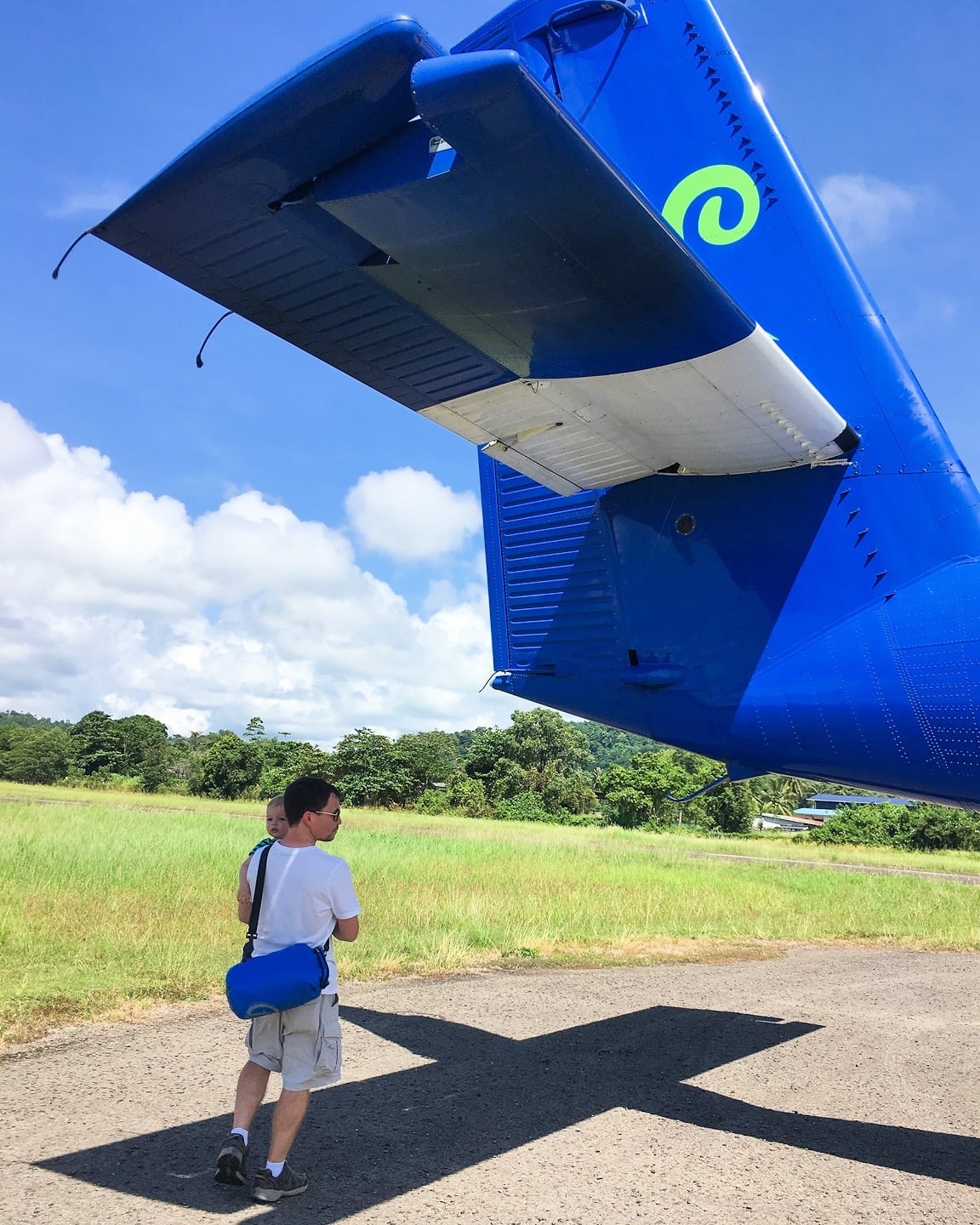 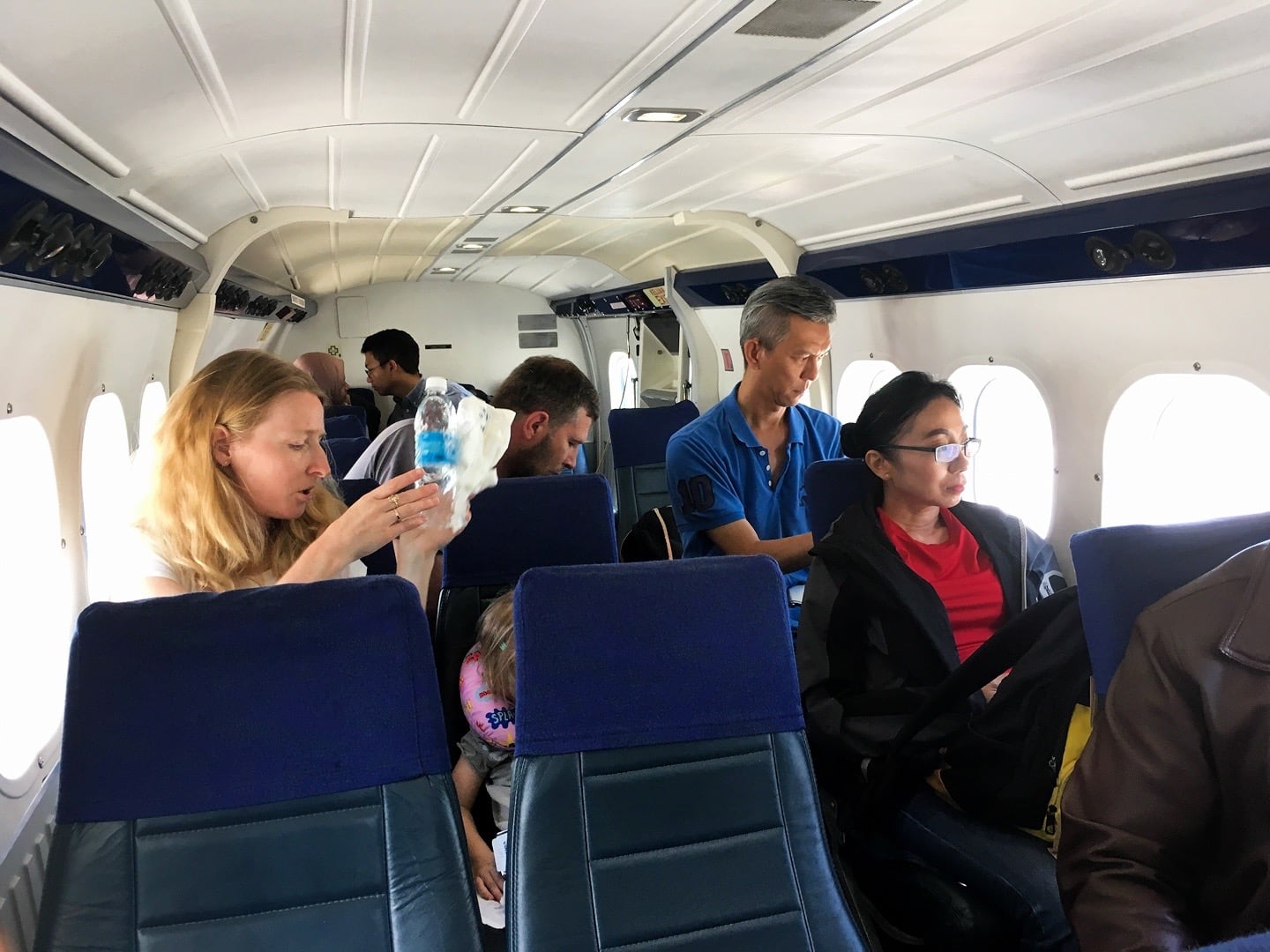 The rest of the passengers had boarded in Kota Kinabalu. And for the record, there were definitely more than four seats available on the flight.

At the time I reserved the tickets, there was an option to choose your seats. 1B and 1C sounded fun, right behind the cockpit. Again, we had the whole row to our ourselves and as a bonus, the cockpit door stayed open for the duration of the flight—actually, there was no cockpit door. 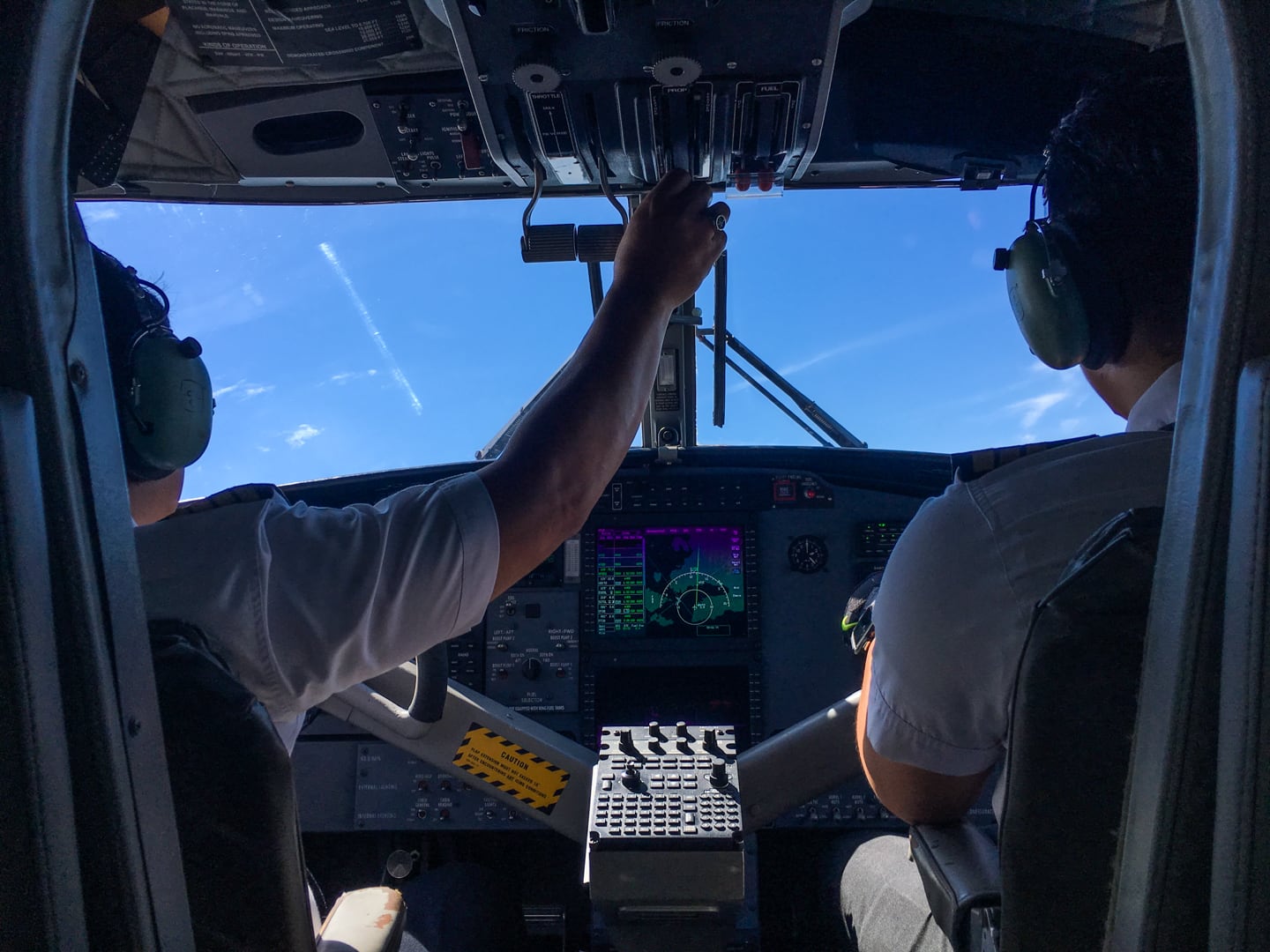 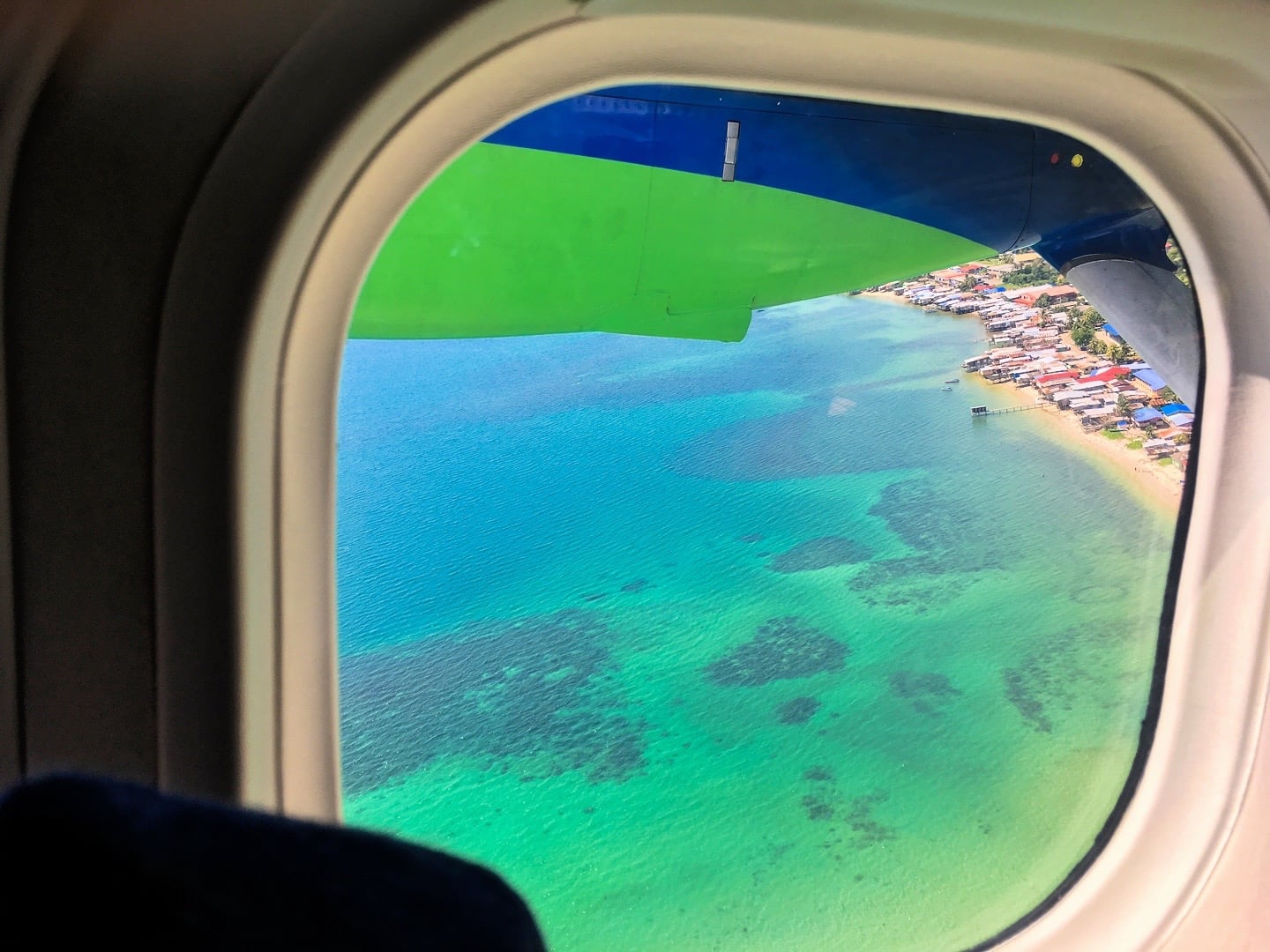 So long, Kudat! And your blue, blue waters. 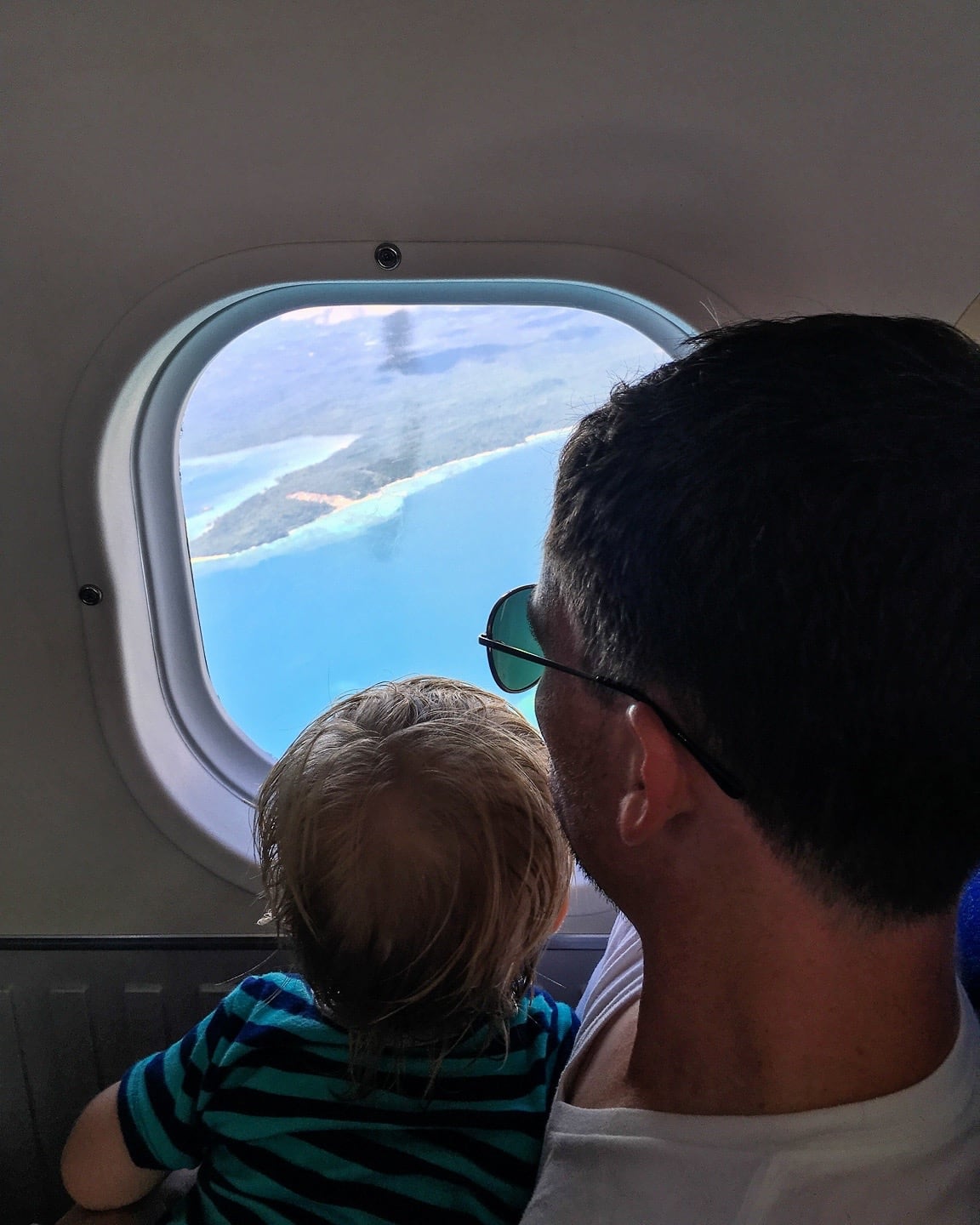 Noe did a great job. The sensation—really the whole experience—was a bit different from flying an Airbus A320 (of which he’s quite accustomed to by now), but not that different from an ATR-72 (of which we’ve flown many in Laos), but much, much smaller. There was some apprehension on take-off, but the Twin Otter lifted so quickly and effortlessly off the runway, I’m not sure Noe realized we were airborne until he peered out the window—after which he was absolutely 100% mesmerized by what he saw—for the next 40 minutes! Seriously, he did not avert his eyes from the window for the entire duration of the flight. 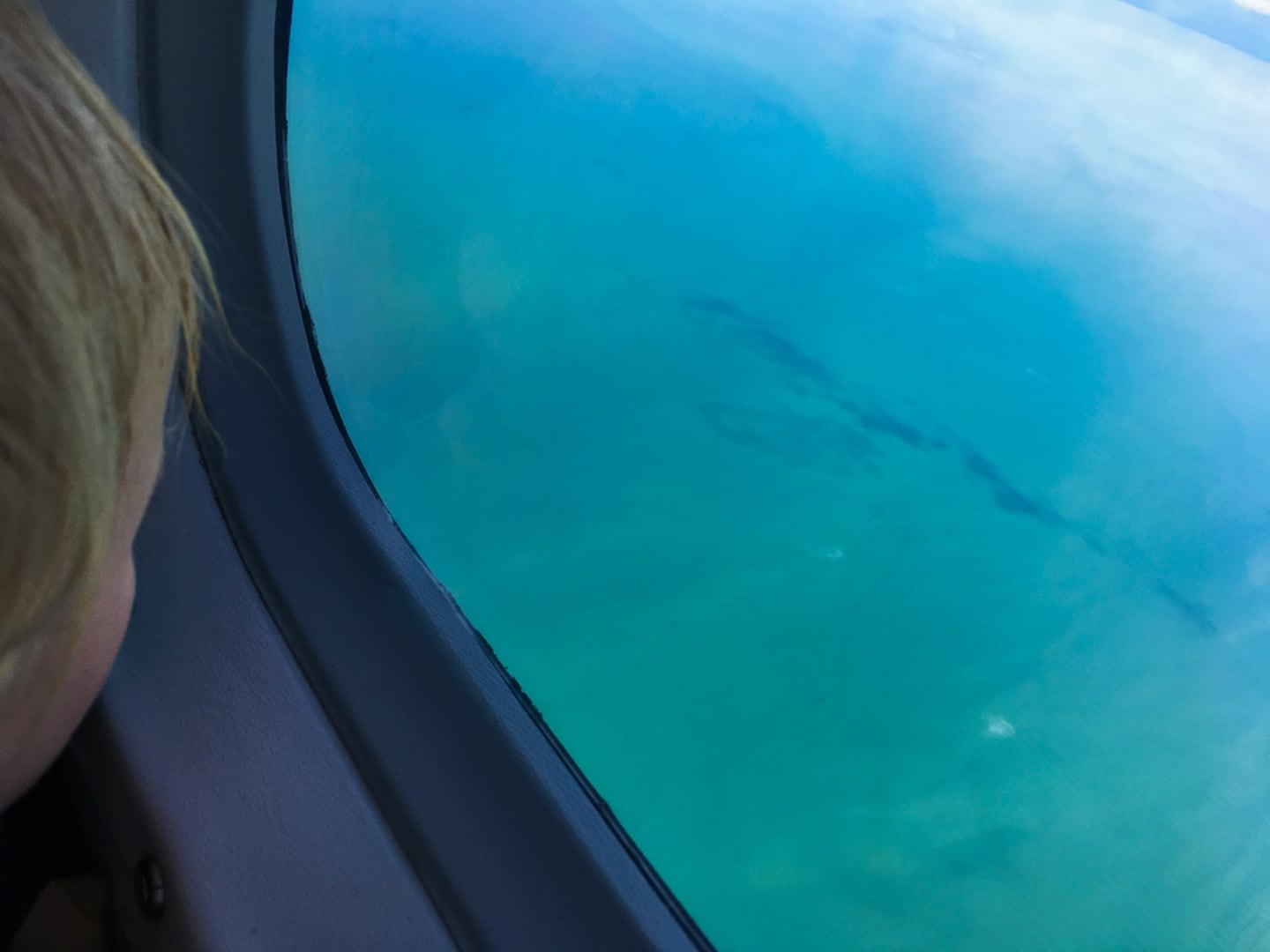 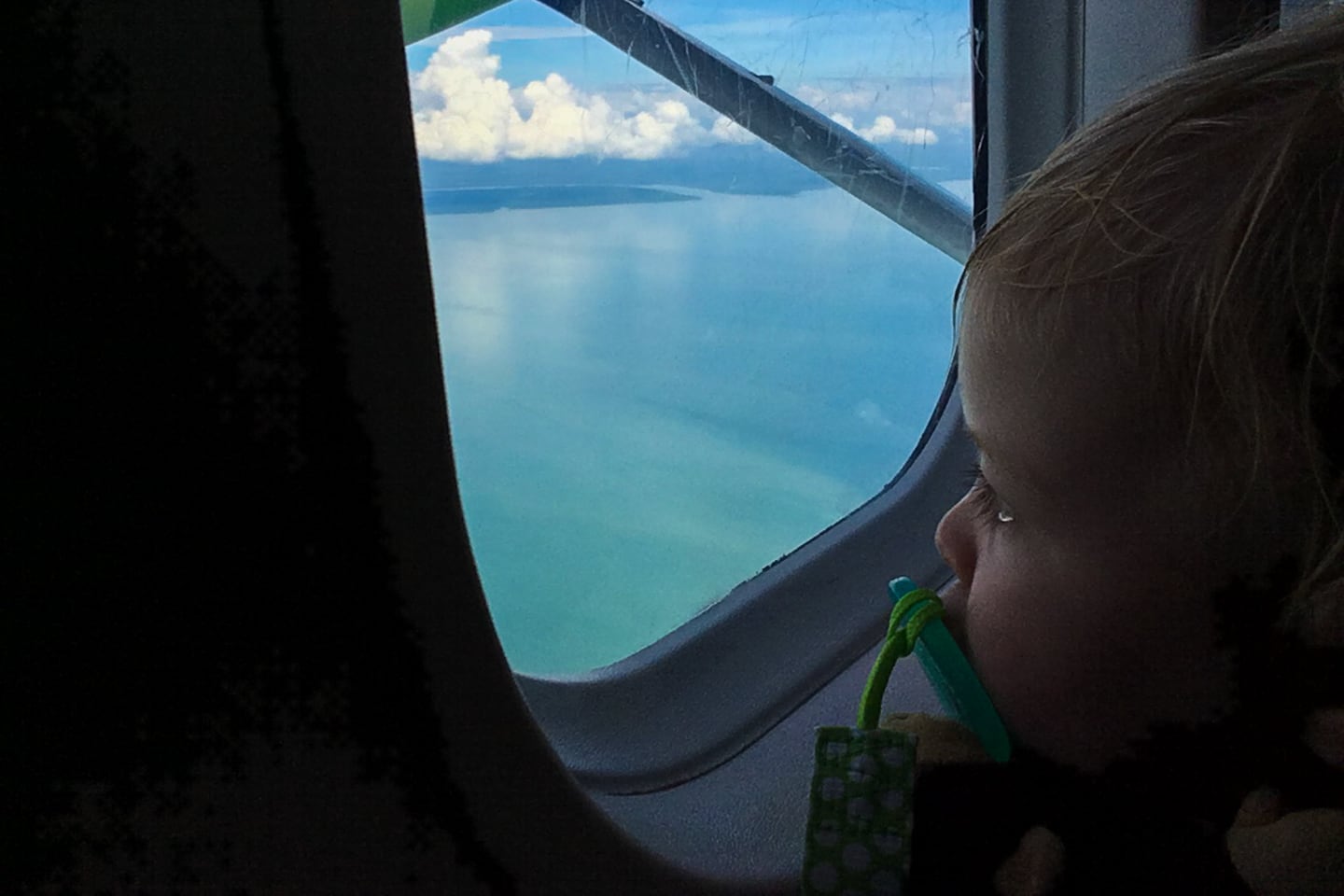 And if Noe looks a bit sweaty, it’s because these Twin Otter’s don’t have climate control. It was a bit stuffy flying in the tropics, but not too bad (at least that’s what Lori and I thought—ask the Mister and you might get a different answer). These planes fly low and slow, so no need for climate control, or pressurization, for that matter. 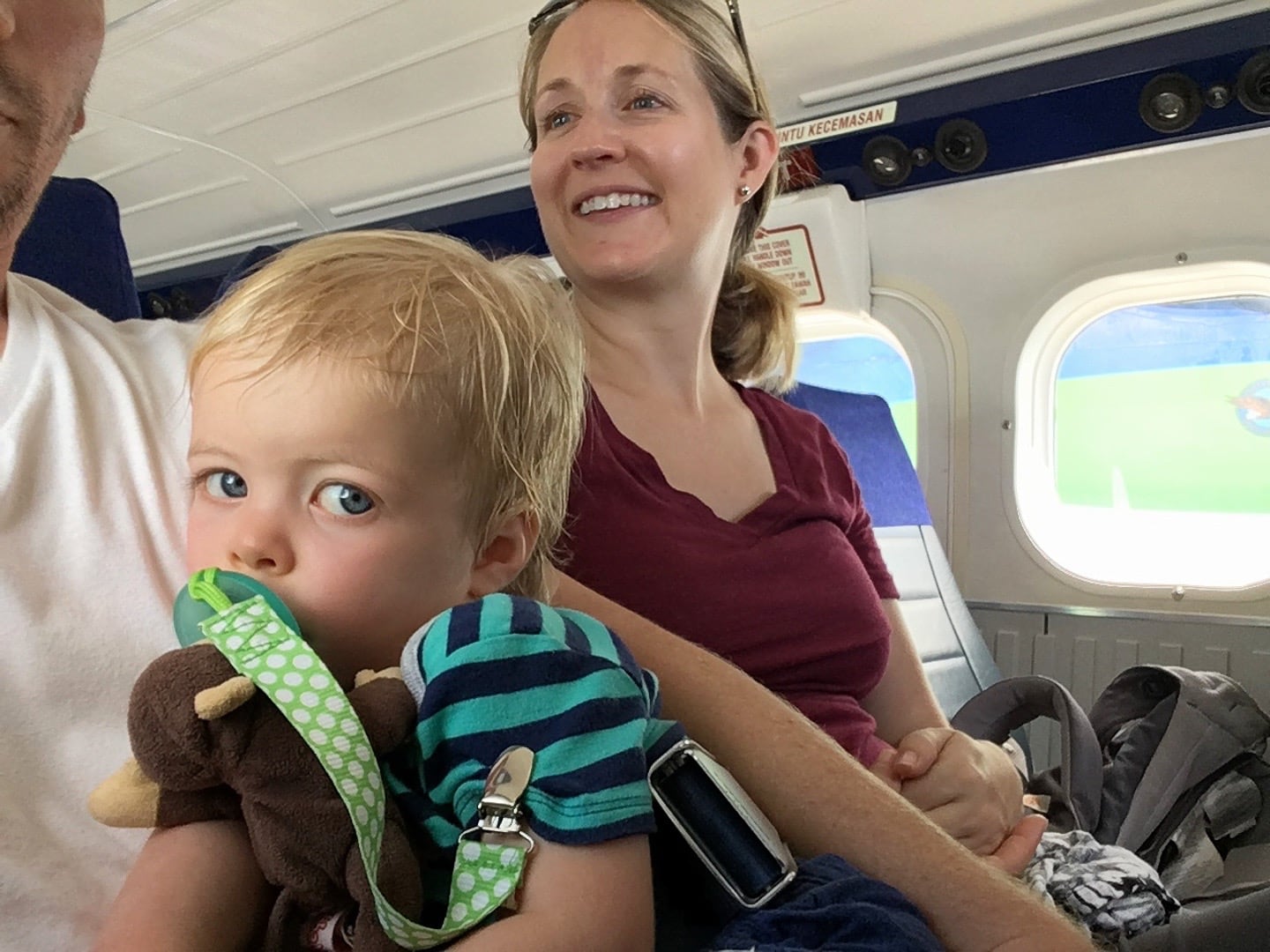 Flying in the DHC-6 is awesome—it’s like being in a flying car. The pilots were amazing. There were plenty of thunderheads to dodge (this being one of the storm seasons in Borneo, after all) and they expertly dodged every one of them. There was quite a bit of cloud cover coming in to Sandakan, but the ride was baby-butt smooth all the way into Sandakan airport. 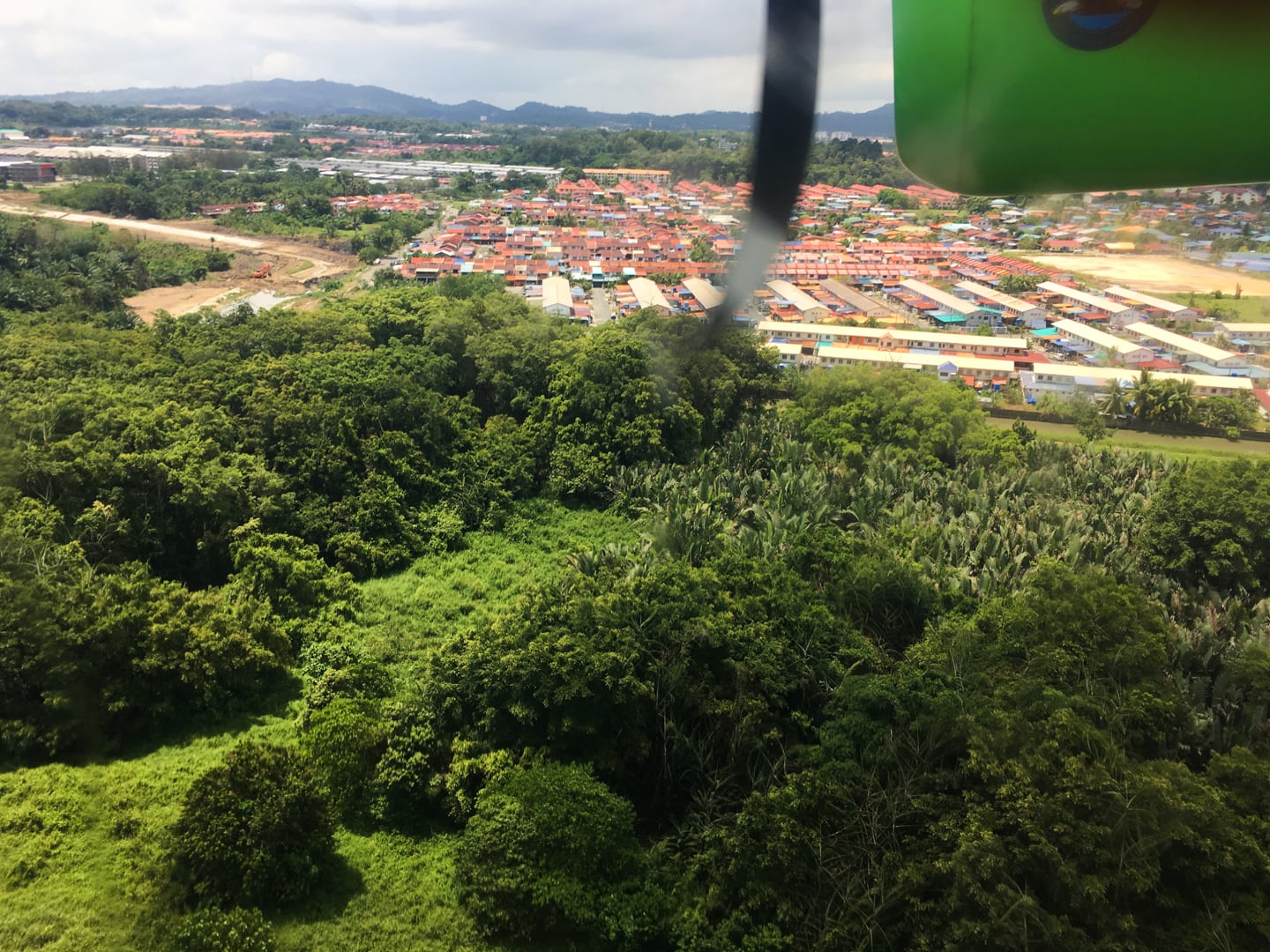 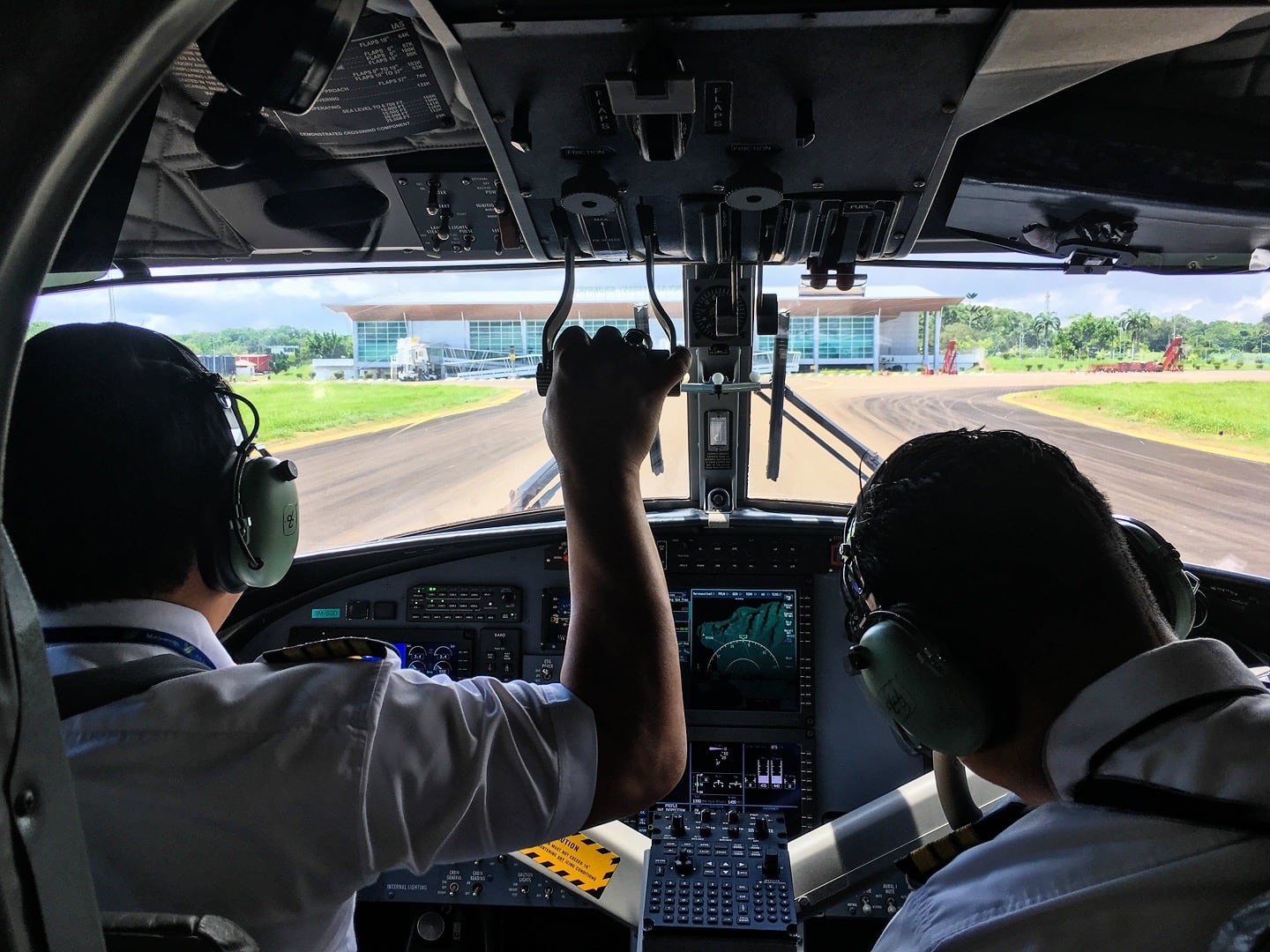 Touching down in the jungle… 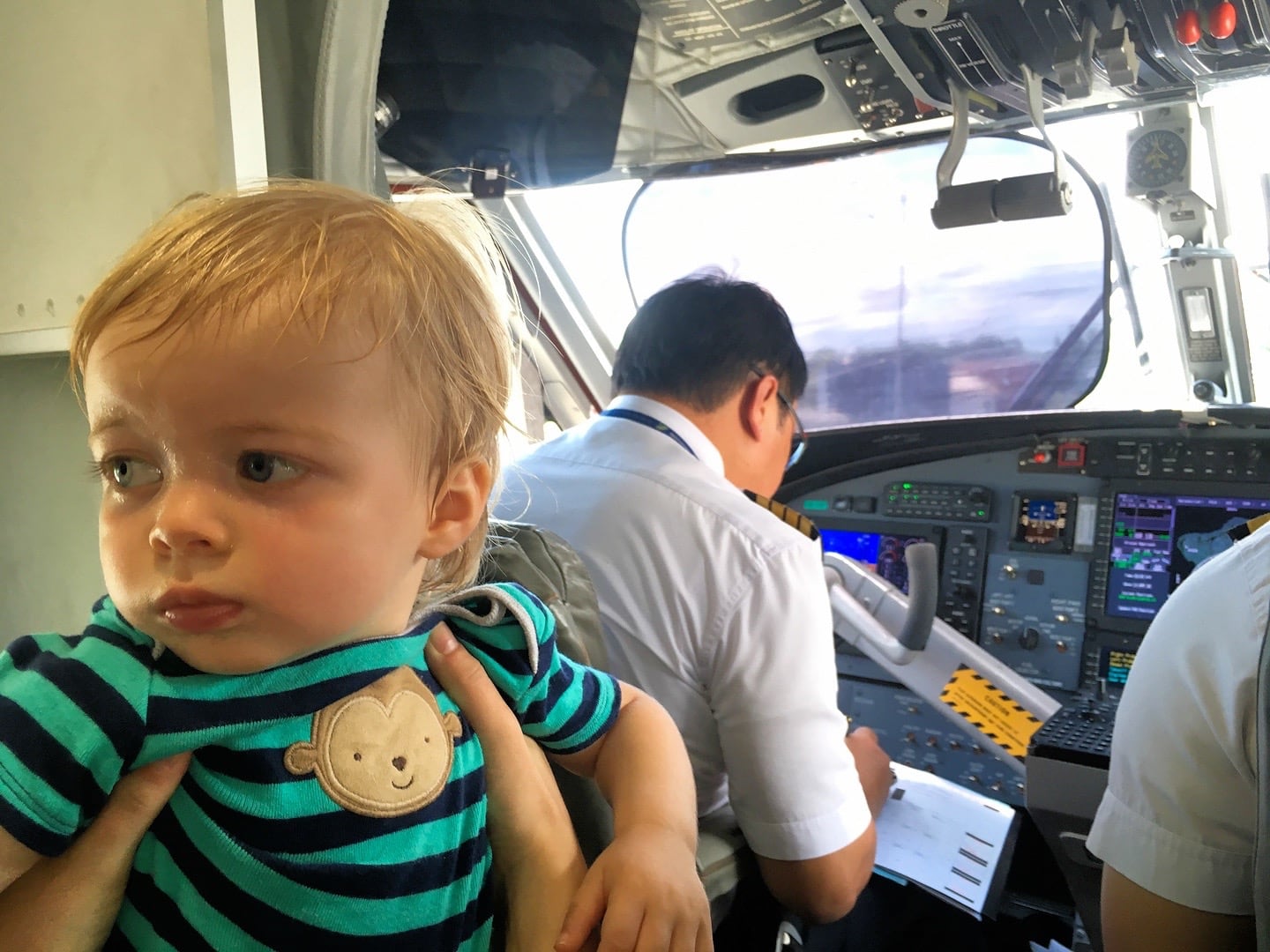 Made it to Sandakan! And it’s not even noon!

Today we explore Sandakan town. Tomorrow, free-range orangutans and our home for the next three days on Borneo’s famed Kinabatangan River. 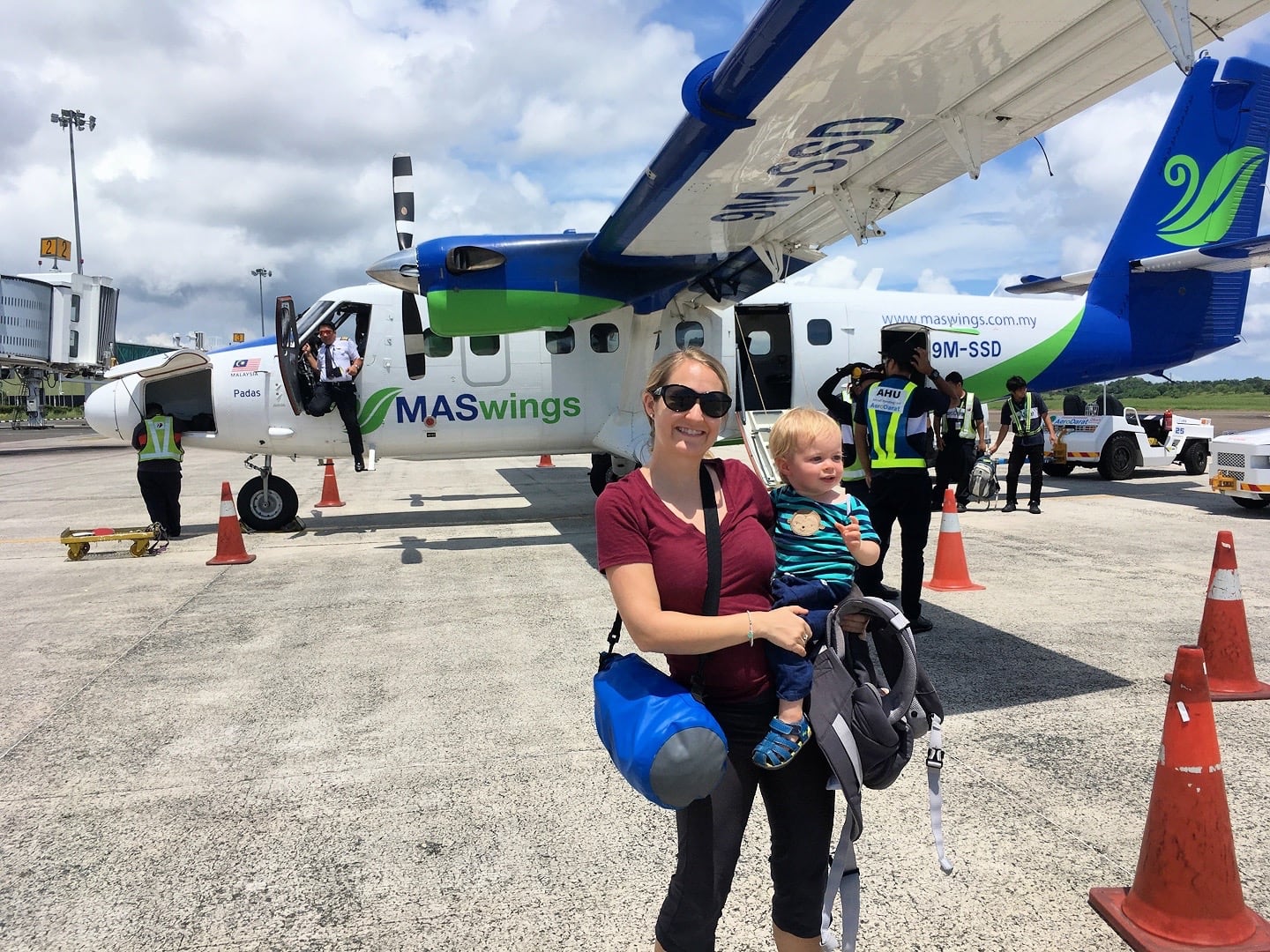 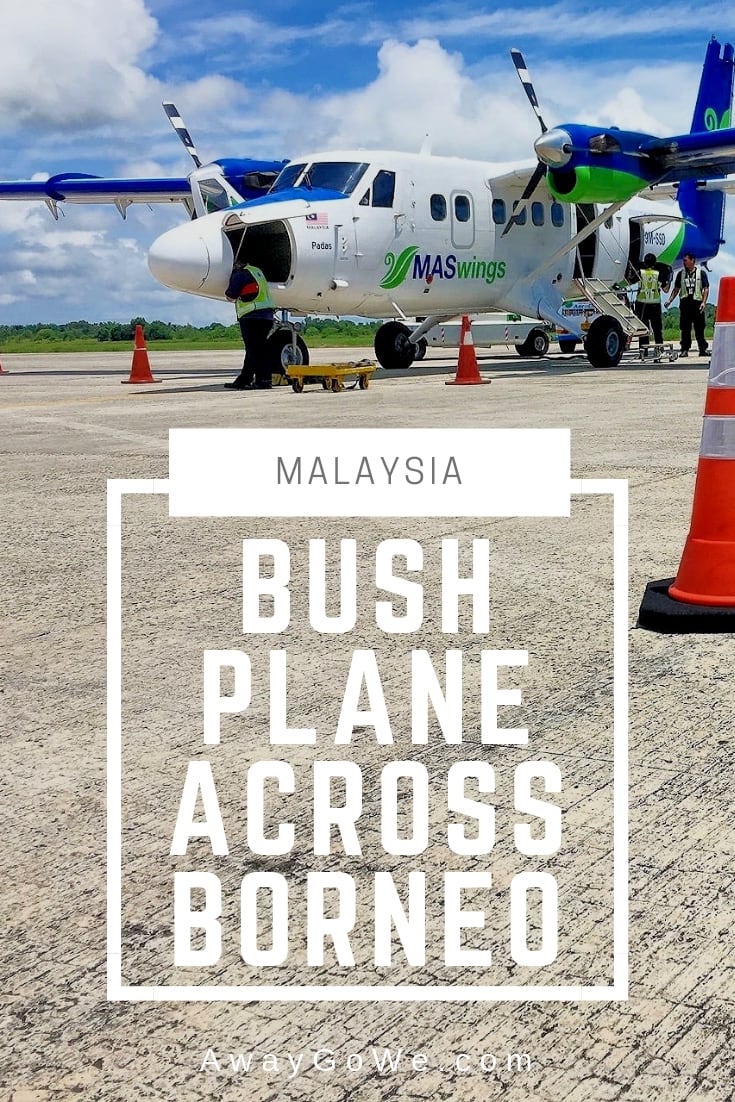