There is little reason why Inhambane City should still exist today, and yet it has endured the tides of change with quiet dignity, as the fickle goddess of progress giveth and taketh. 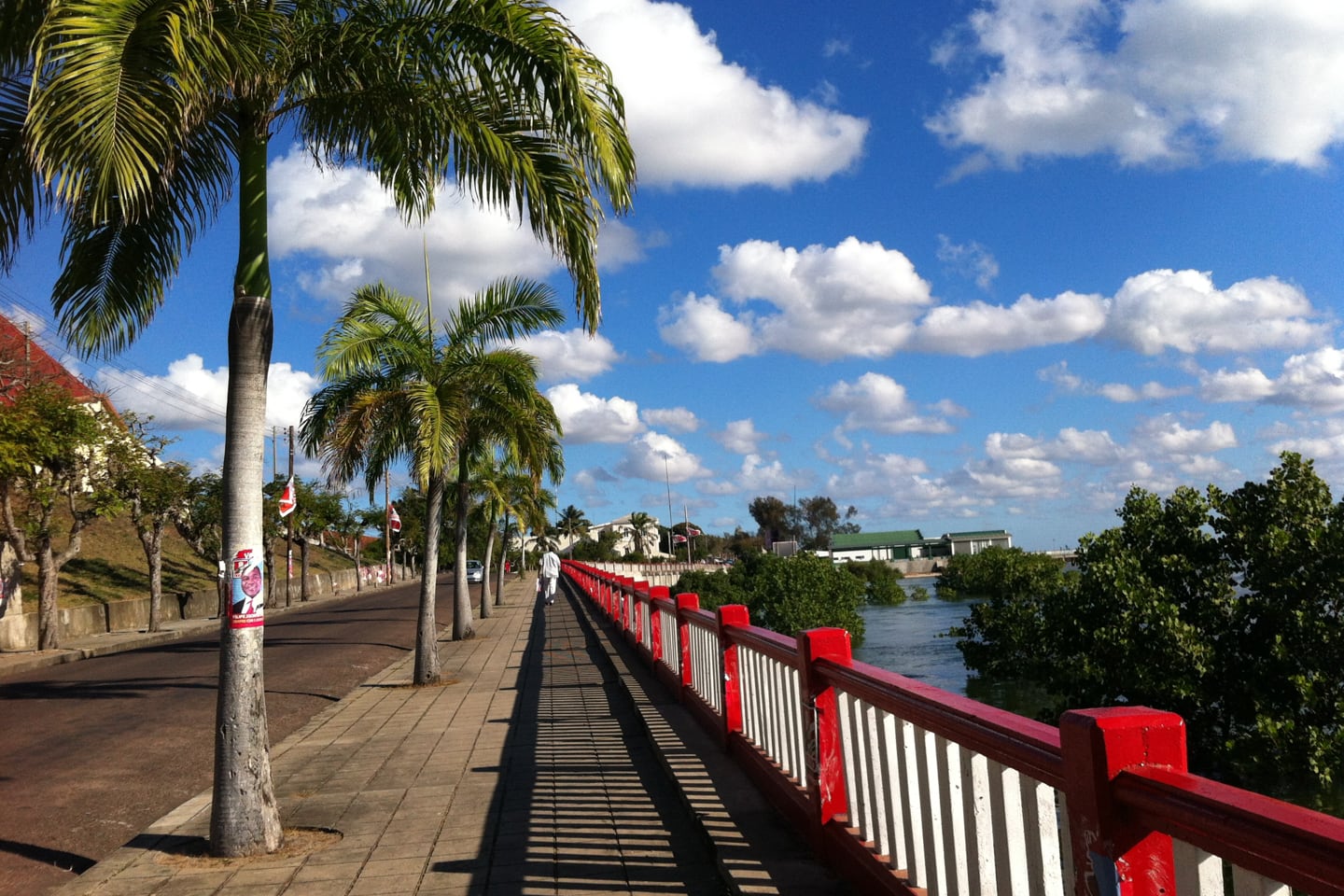 I was genuinely excited to return to Inhambane City, so much so that I made sure to call ahead and book at least two nights in one of my old haunts, Pensao Pachiça (now, Pensao Machibombo, pictured below). Like the Base, Fatima’s, and Funky Monkey, I was thrilled to learn that the place was still around. 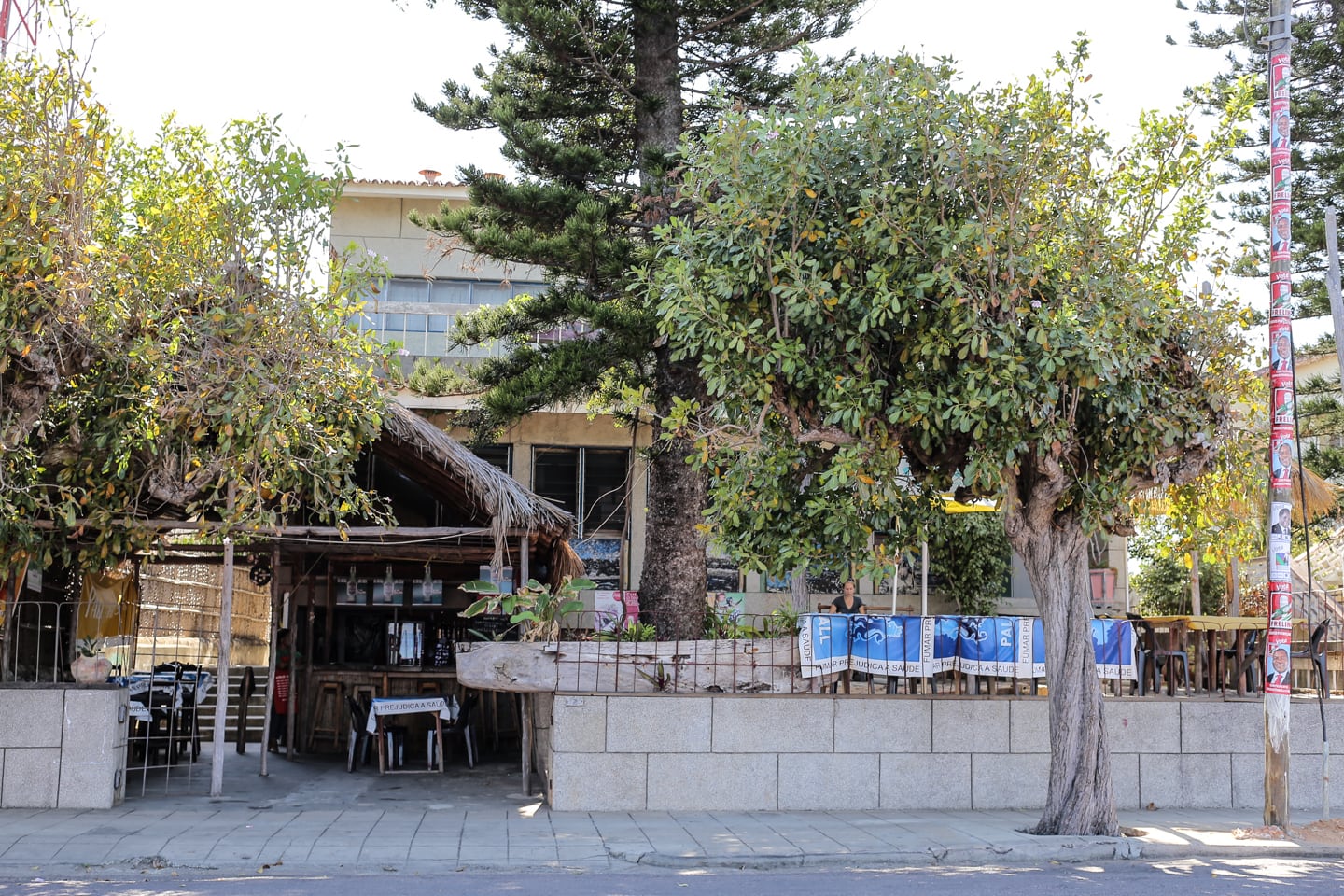 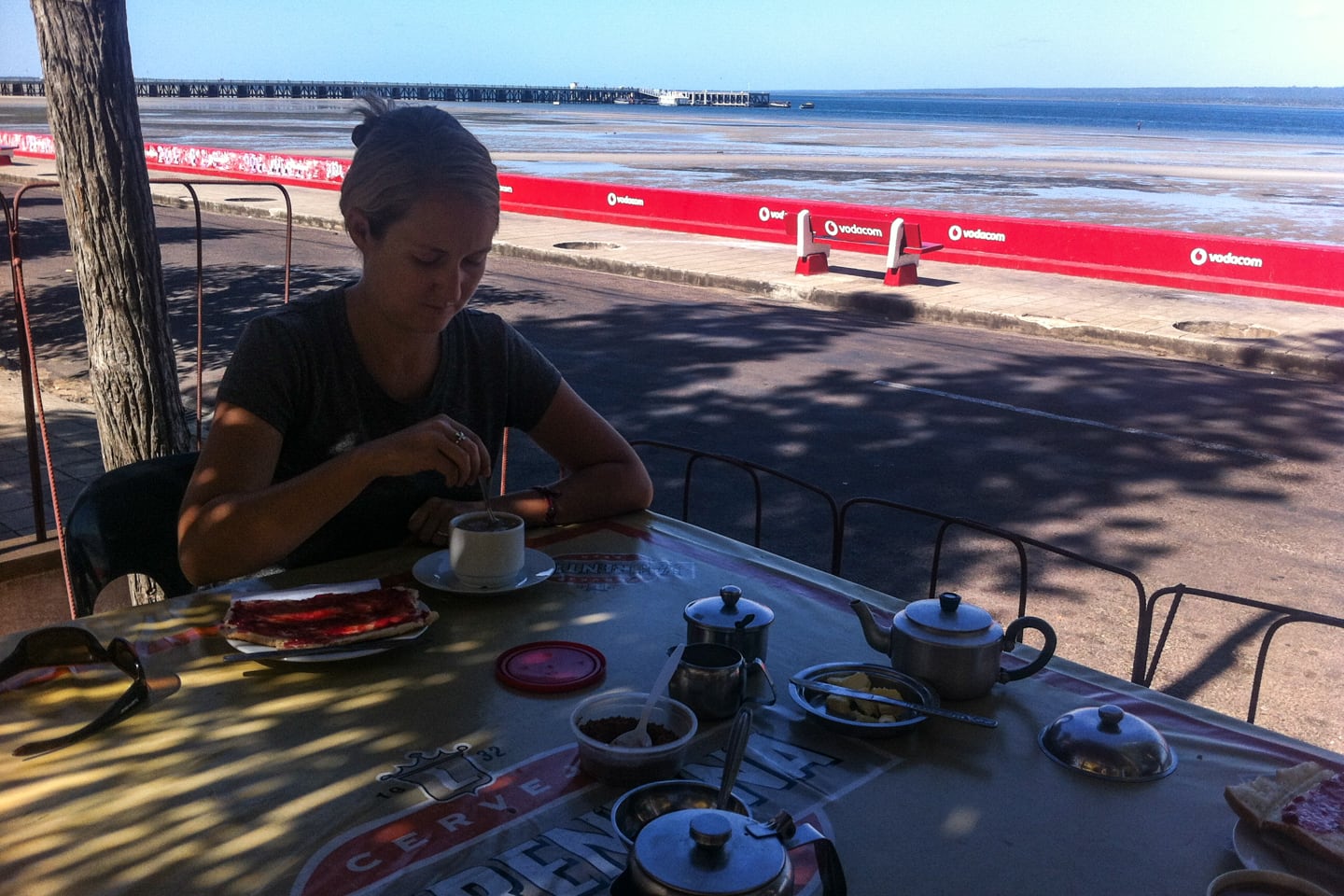 I was also happy to discover that, unlike Maxixe, Inhambane hadn’t changed that much — hadn’t lost it’s essential character and quality. And better yet, the town looked better than it ever had a decade ago. 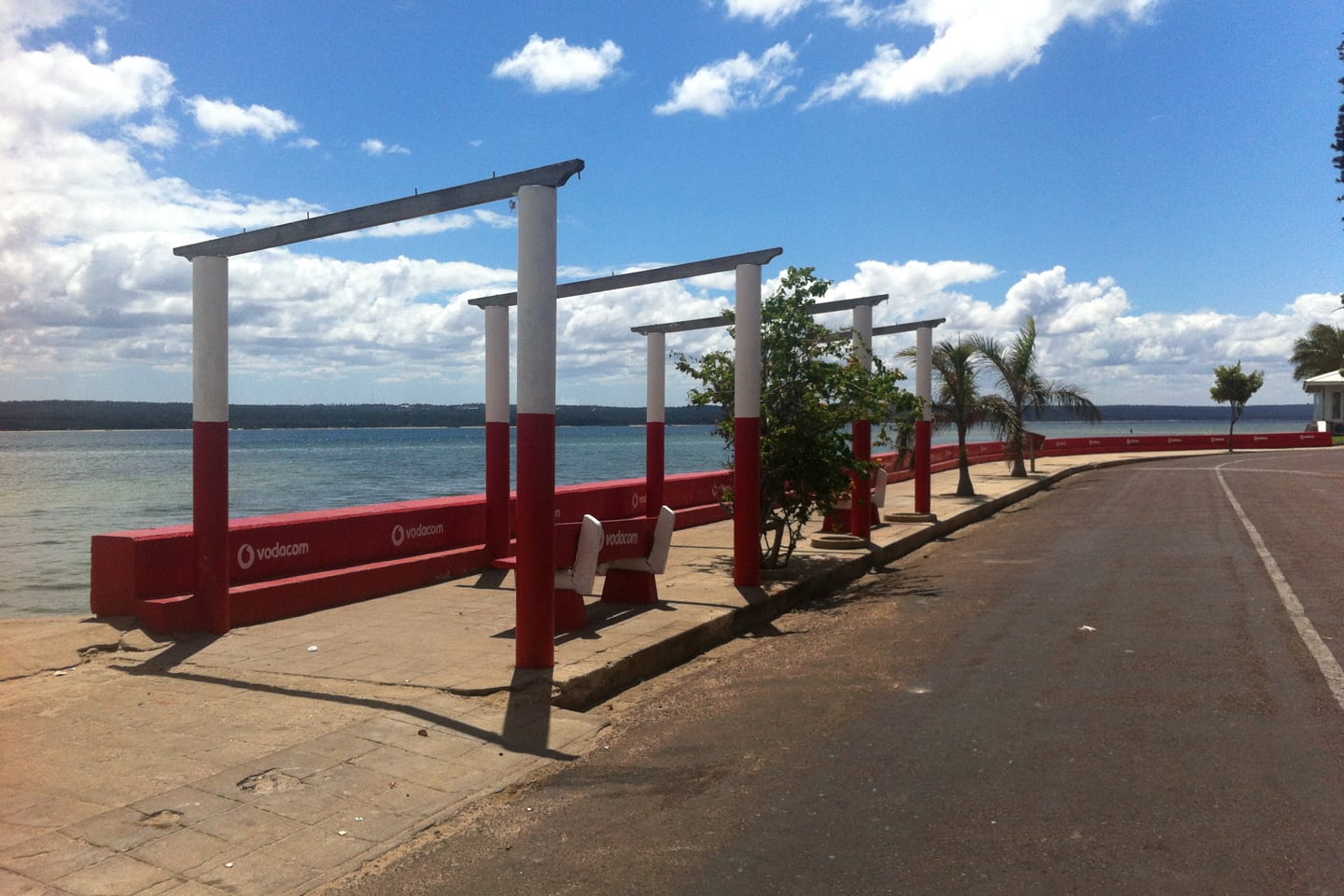 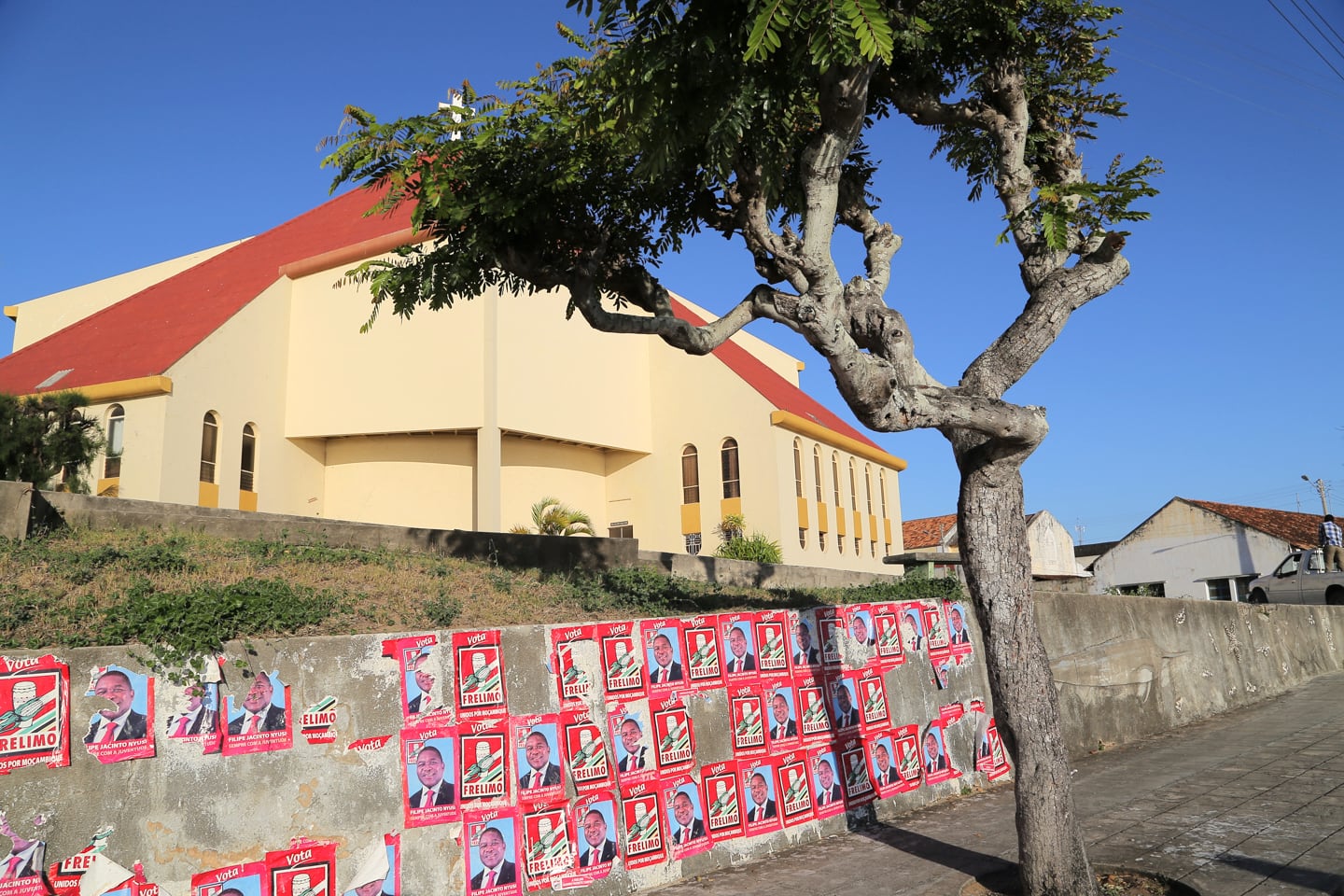 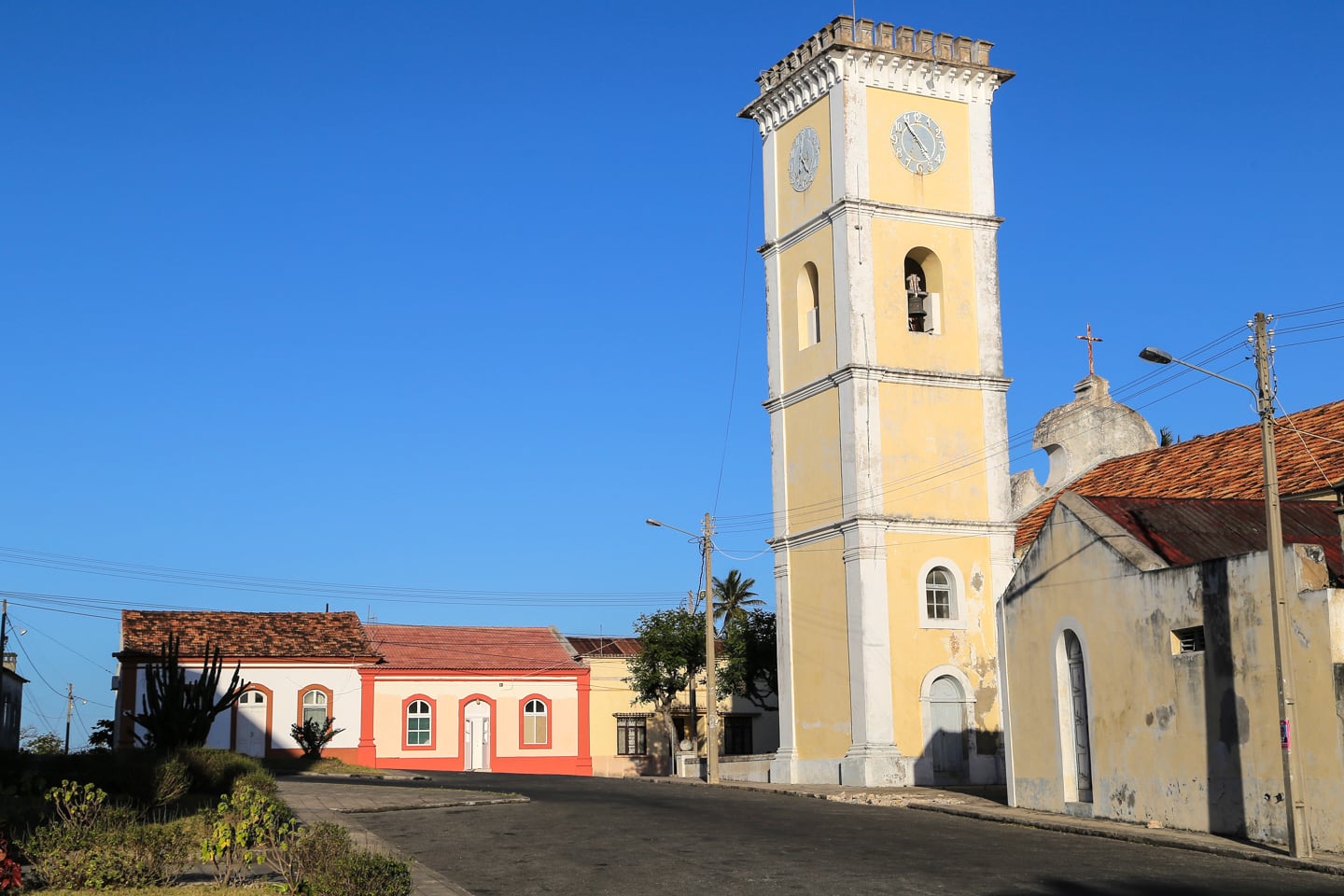 Inhambane harbors many fond memories for me. During my first year living in the area, it offered the only public internet cafe in the entire province (which is still around, actually — Lori practically begged me to take her there to see it for some odd reason or another). I traveled about twice a week (weekly in my second year) to check and send emails, withdraw my living allowance at an ATM, and have a meal in one of Inhambane’s good restaurants. Inhambane offered dishes that you couldn’t get in Morrumbene (or Maxixe): Chicken sandwiches at the Take Away near the market, shrimp or crab coconut curry at Maçaroca, or pizza at Pensao Pachiça.

All of the above would have been enough for me to put the town on a pedestal, yet Inhambane also had the distinction of being one of the most beautiful cities in Mozambique, not only for it’s charming old Portuguese structures, but it’s ideal location perched on a beautiful bay. 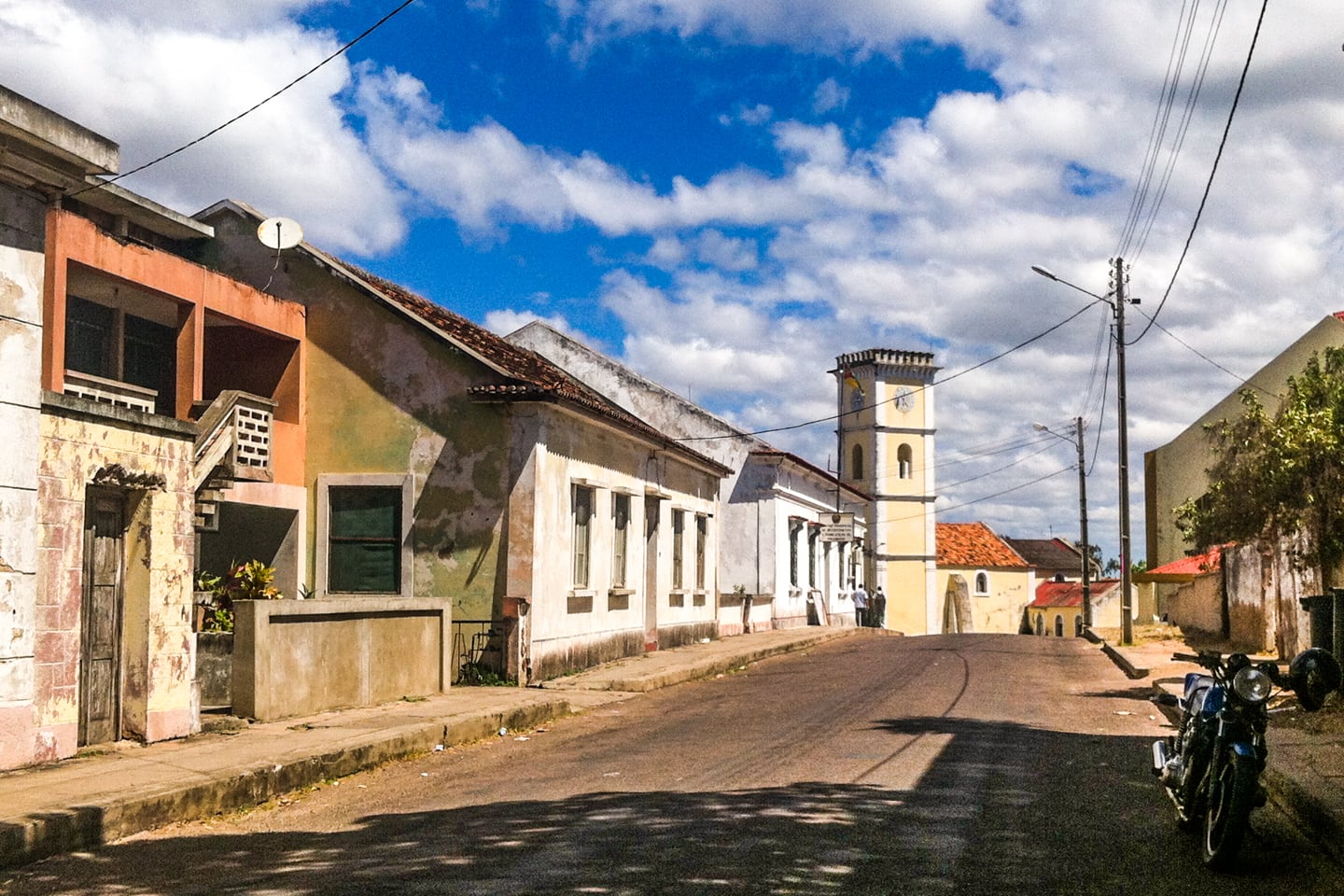 Progress can have a devastating effect on old-world charm, particularly if the beautiful buildings had been left behind by brutal colonizers.

It’s a miracle in many ways that most of these buildings weren’t leveled in the wake of independence. If the years following 1975 had been characterized by stability or prosperity, this may indeed have been the case.

It’s certainly not out of the realm of possibility that the capital of Inhambane Province might have been moved across the bay to Maxixe, which has long offered better infrastructure and access to government services. Inhambane City lies on a peninsula that isn’t the easiest to access, yet remains the administrative center for residents of a sizable province. And yet, the city endures.

I suppose that’s what happens when you have independence, reconstruction and a 19-year civil war, and more reconstruction to focus on in in the span of just a few decades. In recent years, tourism has returned to Inhambane’s beaches (just outside of the City) and the city itself, also increasingly appears to be a tourist draw, making any drastic changes to the city’s character unlikely in the foreseeable future. 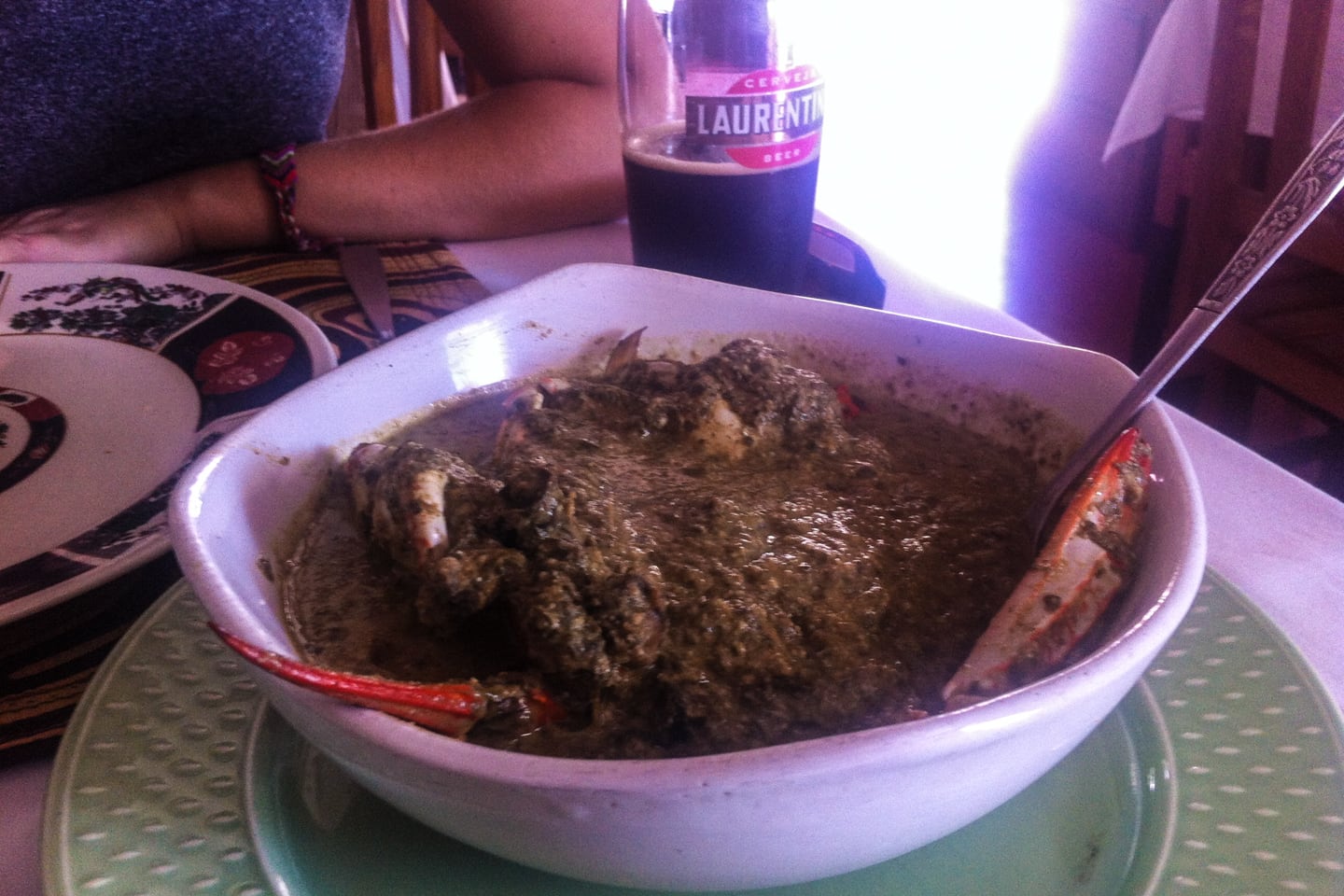 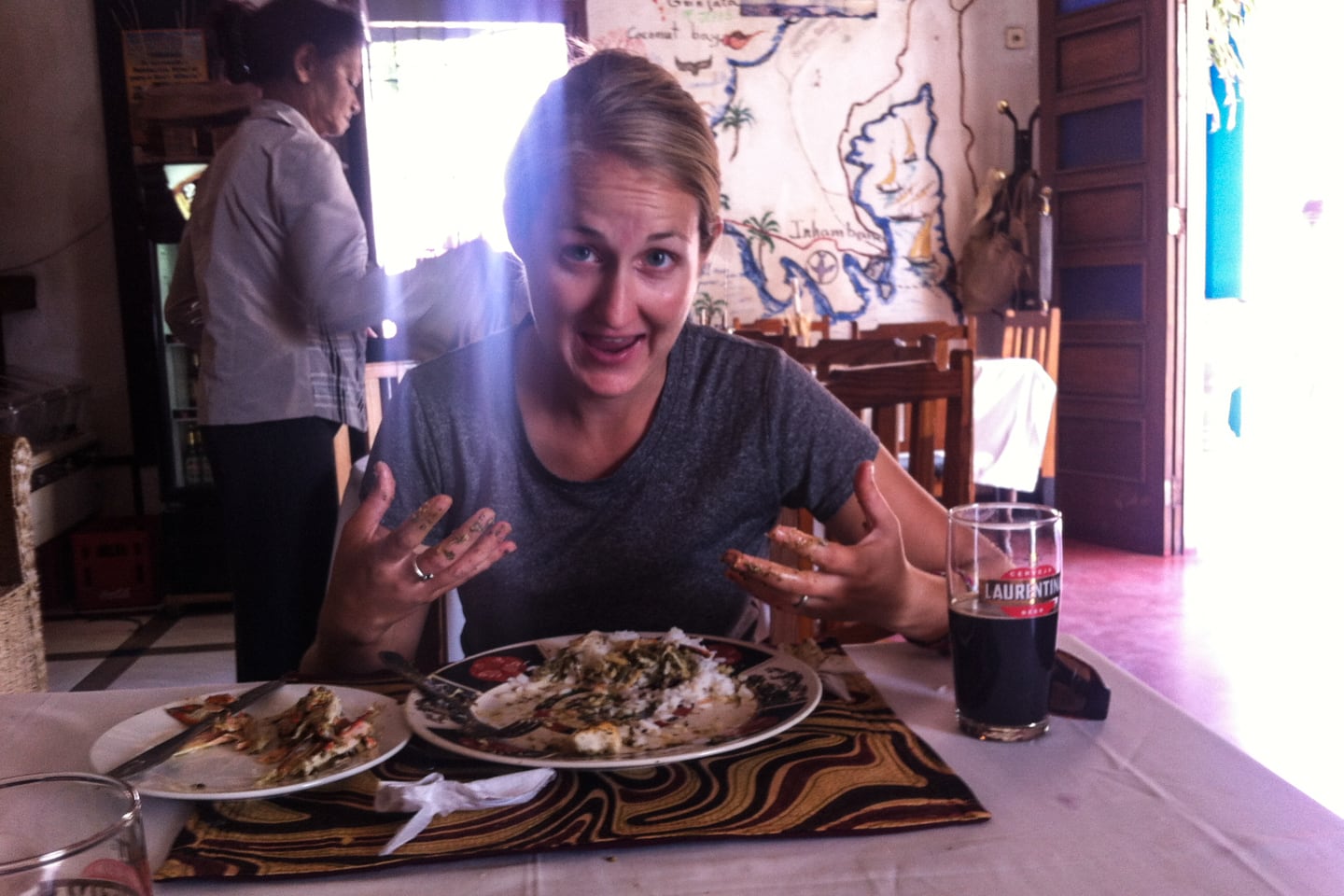 Alongside old favorites such as Maçaroca (above) and Pensao Machibombo, Inhambane has added a few new restaurants to the mix in recent years: Verdinho’s Cafe across from Maçaroca, and Bistro Pescador (below) with a magnificent view (and free wifi!) on the waterfront next to the pier. 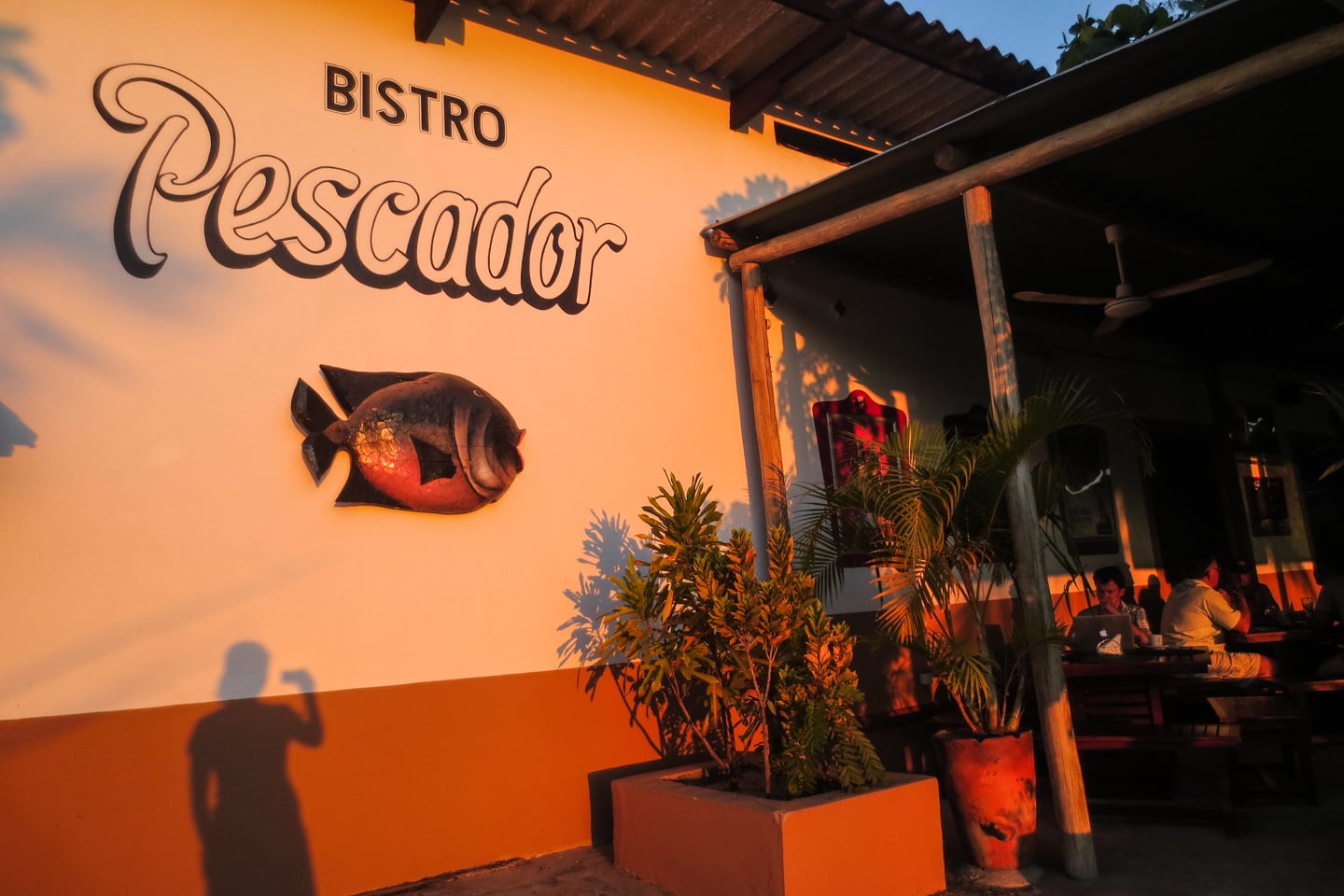 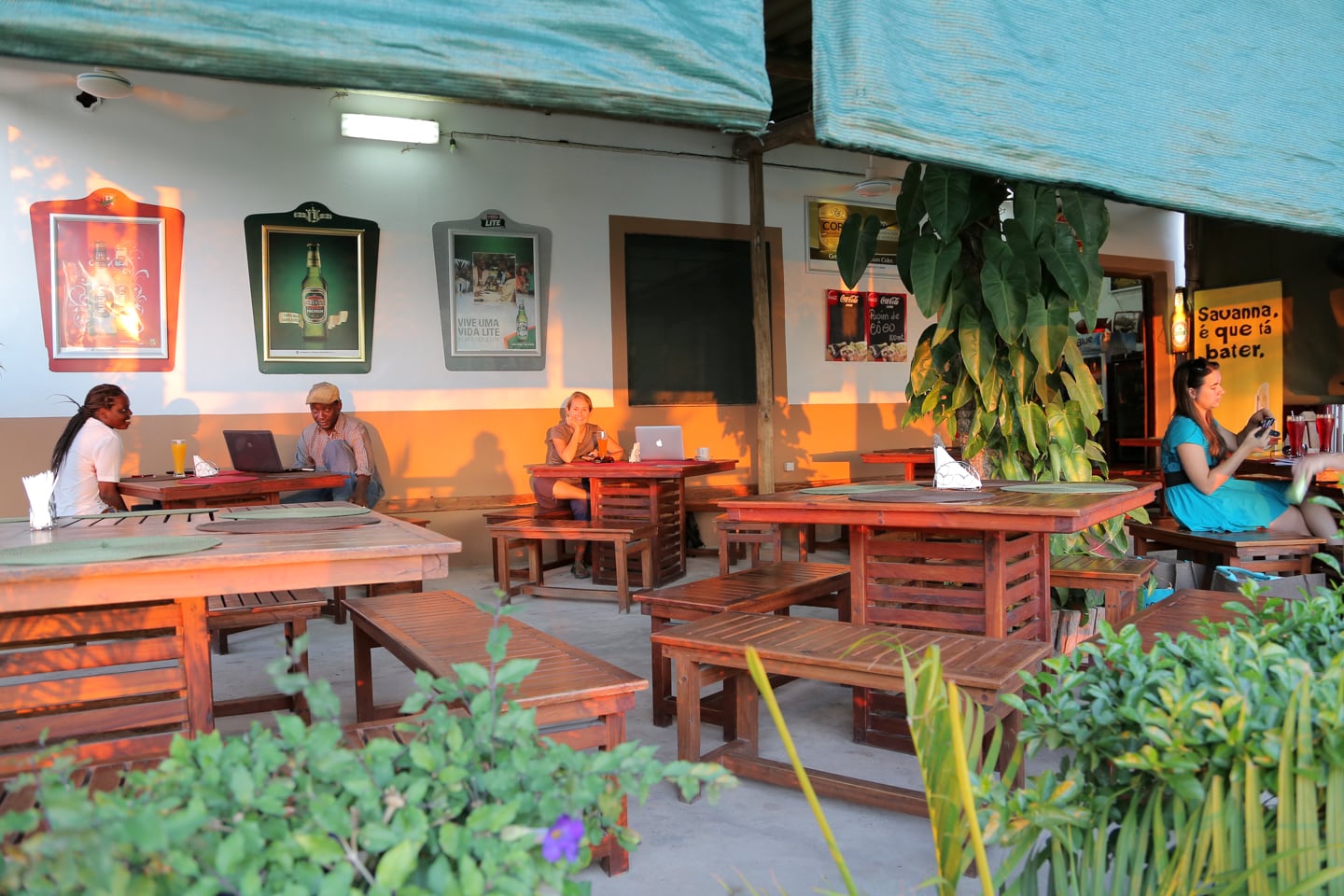 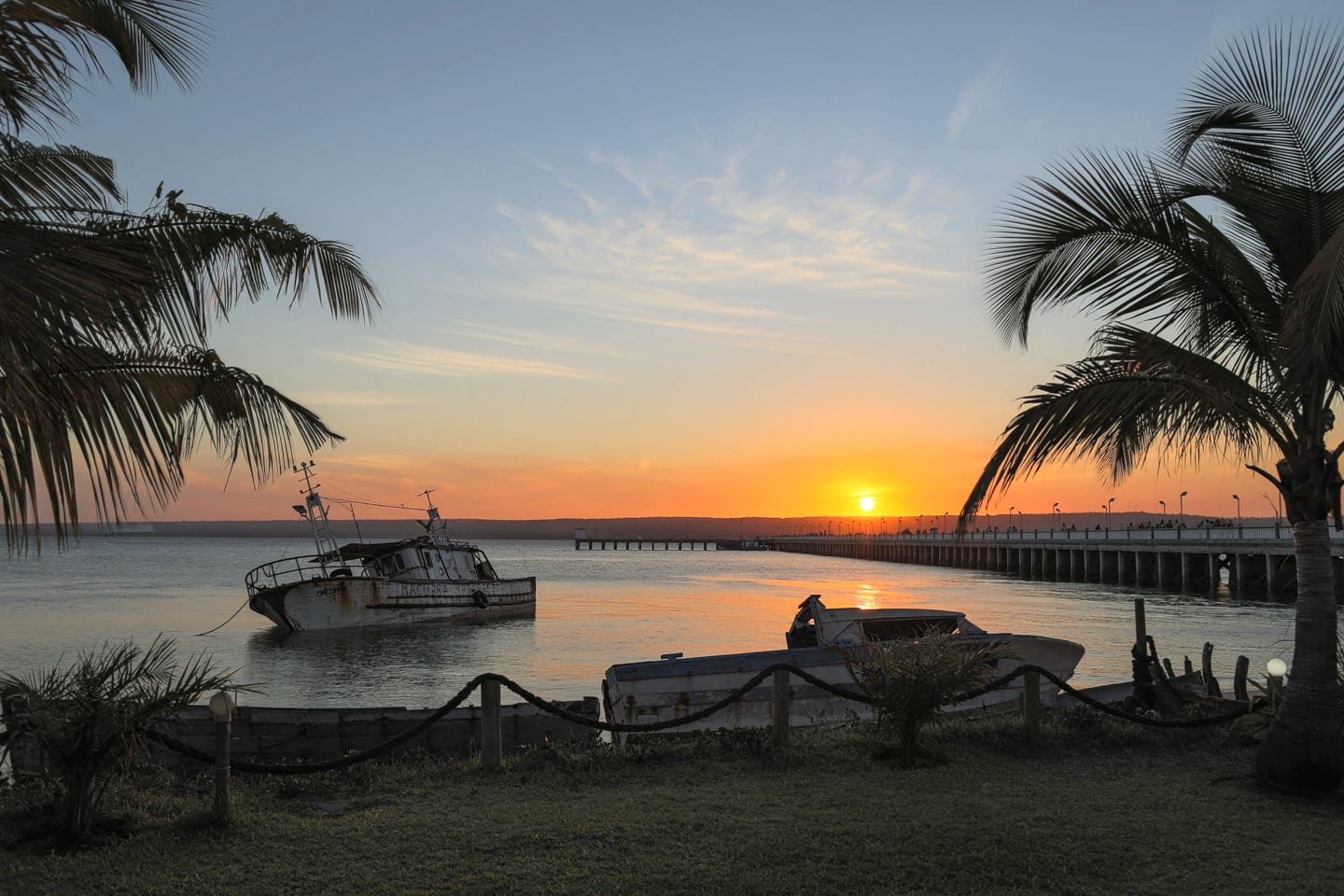 The sunsets from Bistro Pescador were pretty amazing. 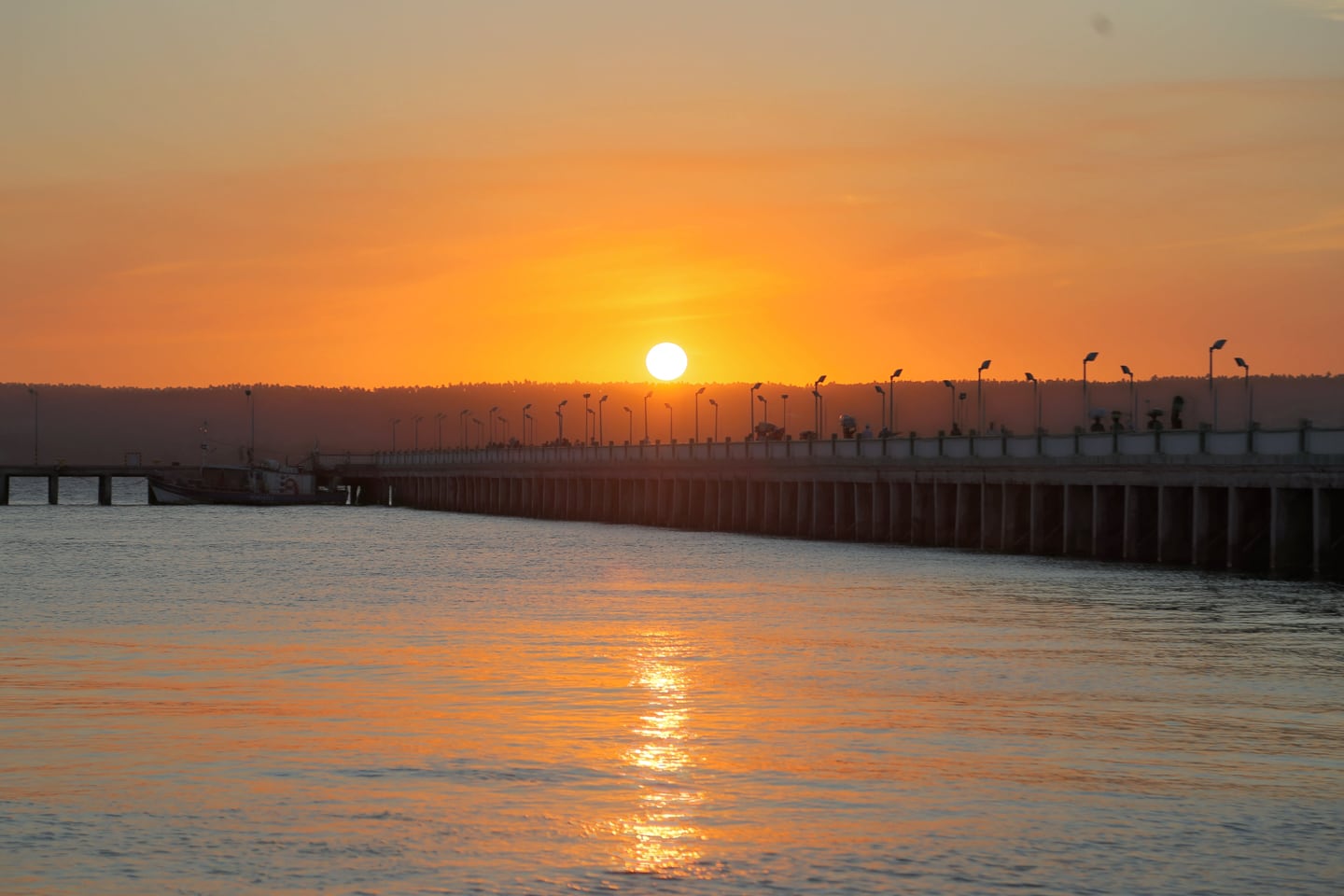 Unfortunately, it seems the tiny little Take Away serving up delicious chicken sandwiches for cheap is no longer around. 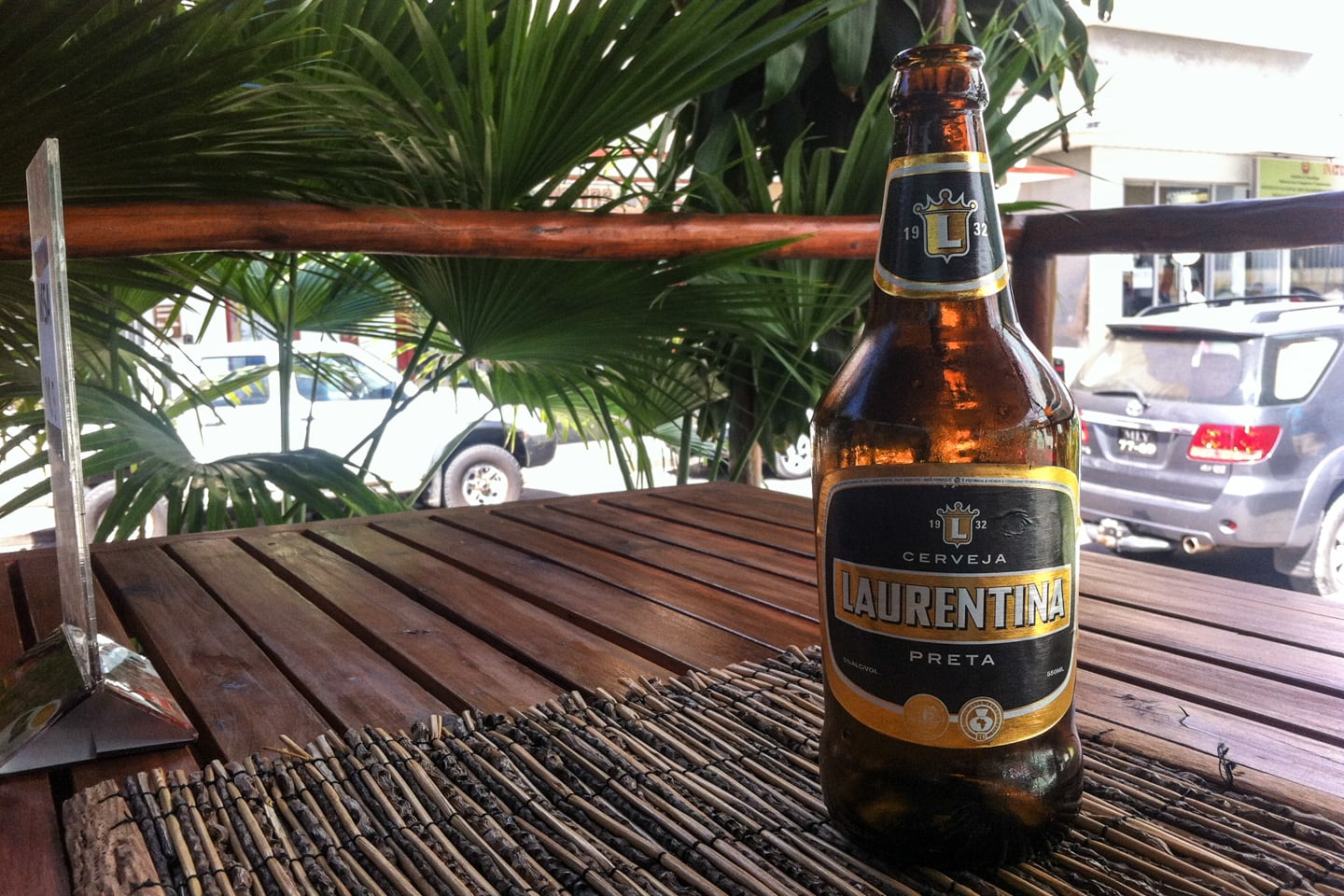 For those of you who are well-acquainted with Mozambique’s legendary Laurentina Preta beer, you may be surprised to discover that they’ve dramatically changed the labeling (see above). Fortunately, it still retains the same dark, smooth, chocolatey and refreshing flavor as it always has. It also appears that quality control has been improved in recent years, as I haven’t consumed a single bottle containing Preta’s seemingly ever-present floaties. 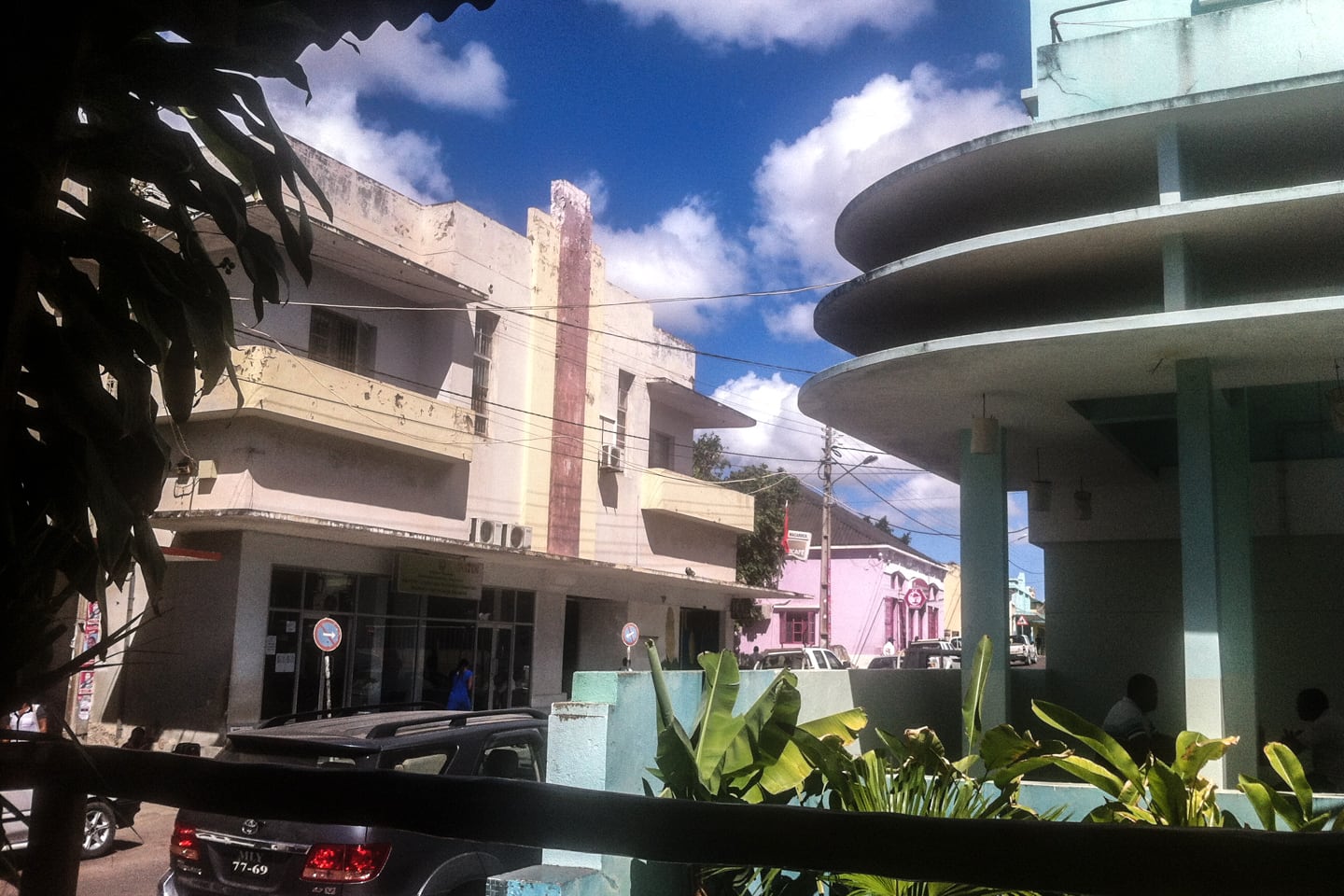 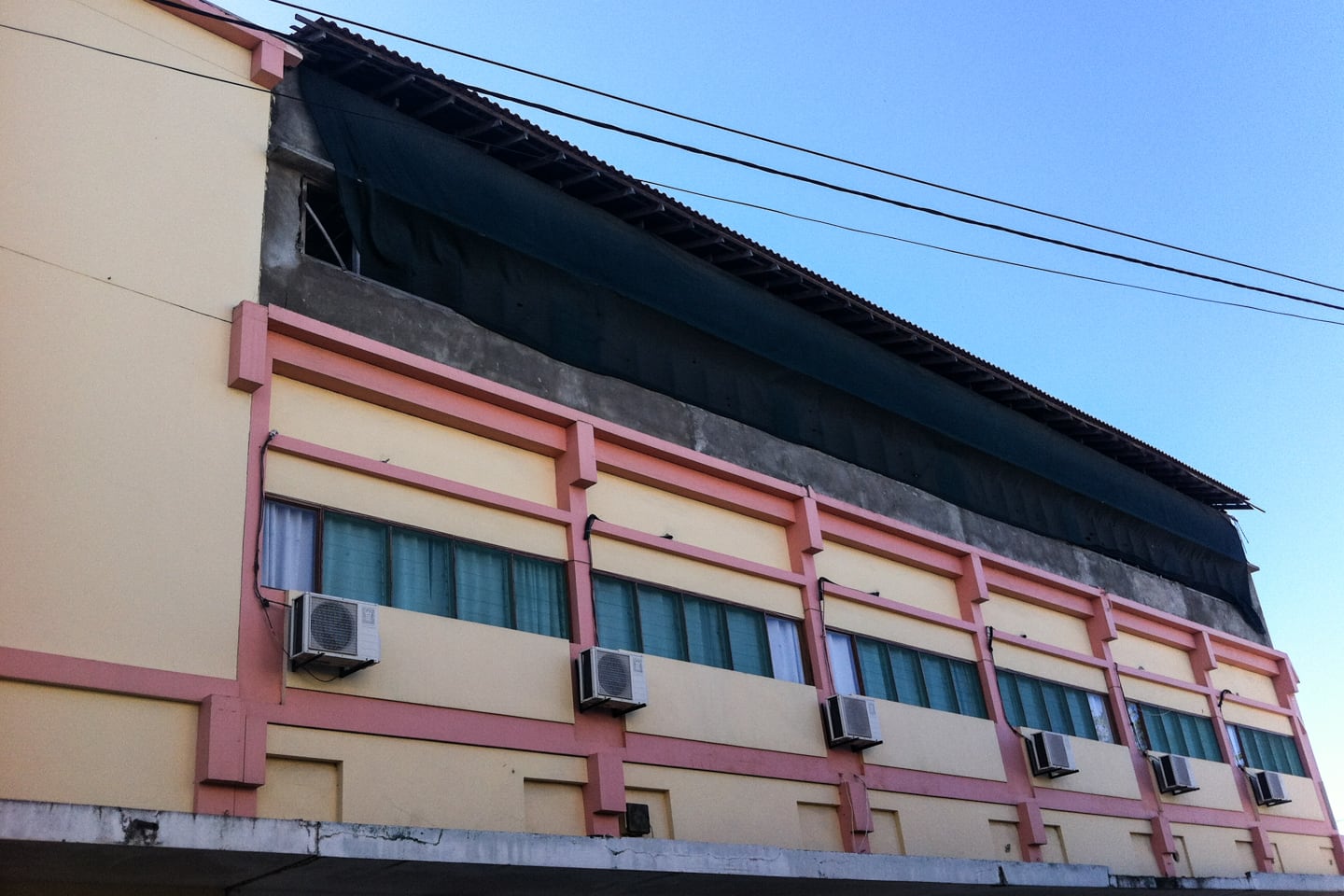 The changes that have taken place over the years in Inhambane are far more subtle than Maputo or Maxixe. I did get the sense that things are moving forward and improving, and there is an energy in town that simply wasn’t there a decade ago (though it still retains much of its sleepy character). Yet, there are signs of stagnation or regression.

While Lori was withdrawing some money at the Barclay’s ATM (formerly Banco Austral), I noticed the top floor of Hotel de Inhambane and was shocked. I distinctly remember sitting in this same exact spot eight years prior waiting for a friend to get money out and watching construction workers pour these concrete walls. Seems that months or even days after my departure, work halted and hasn’t resumed since — a throwback to the old days of walking by dozens of pre-1975 cement shells around Maputo (most of which have since been demolished or completed).

I also noticed that one of the big Indian shops in town (near Verdinho’s) was looking very neglected. It looked much the same way most buildings in Inhambane looked when I first arrived in 2004, but this particular shop had been freshly painted an eye-piercing bright red and white (Colgate colors, with a big Colgate logo — certainly its benefactor at the time). Other buildings along the same street had also been freshly painted with bright colors around the same time, yet now in 2014 the entire lot sits faded and crumbling, and I couldn’t help but feel like we were back in the post-war years again.

My third and most striking observation relates to public transportation in Inhambane. While residents now have the option of taking a spacious steel ferry between Maxixe and Inhambane, their land options have reverted back to pre-2006. One of my last memories (and photographs taken) from Inhambane before completing my service was of a shiny fleet of brand new city buses, comparable to (or nicer than) anything in the U.S. or Europe with electronic marquees, “stop” buttons and even plastic wrap on the seats which hadn’t yet been removed. Again, unfortunately I don’t have the photos to post here, so you’ll just have to take my word for it. Seeing the fleet of city buses in a country in which public transit meant cramming as many passengers as possible into a 13-passenger minivan was like witnessing a miracle unfolding before my very eyes, and all of these years I couldn’t help but wonder if I’d return one day to find that legitimate buses had completely replaced the chapa, the much loved and much despised national icon.

Not only did I return to find that the chapa was still kicking, but dominating, even edging out big city buses in the country’s capital, Maputo — I didn’t see a single city bus in Southern Mozambique during our entire time there. Where did all of the brand new red and white public transit buses all go? So far my attempts to find out have come up short. One encouraging development, however, are the addition of tuk tuks — as in, Auto-rickshaws identical to the ones in India (green and yellow, the whole nine yards!). I know that there are many good arguments to be made against tuk tuks, but when the only choice is between cramming yourself into a minivan, paying out the butt for a taxi, or having a third option somewhere between the two, tuk tuks make sense. It may not fit the mould of Westerners’ ideas of development, but it’s progress for Mozambique, nonetheless. 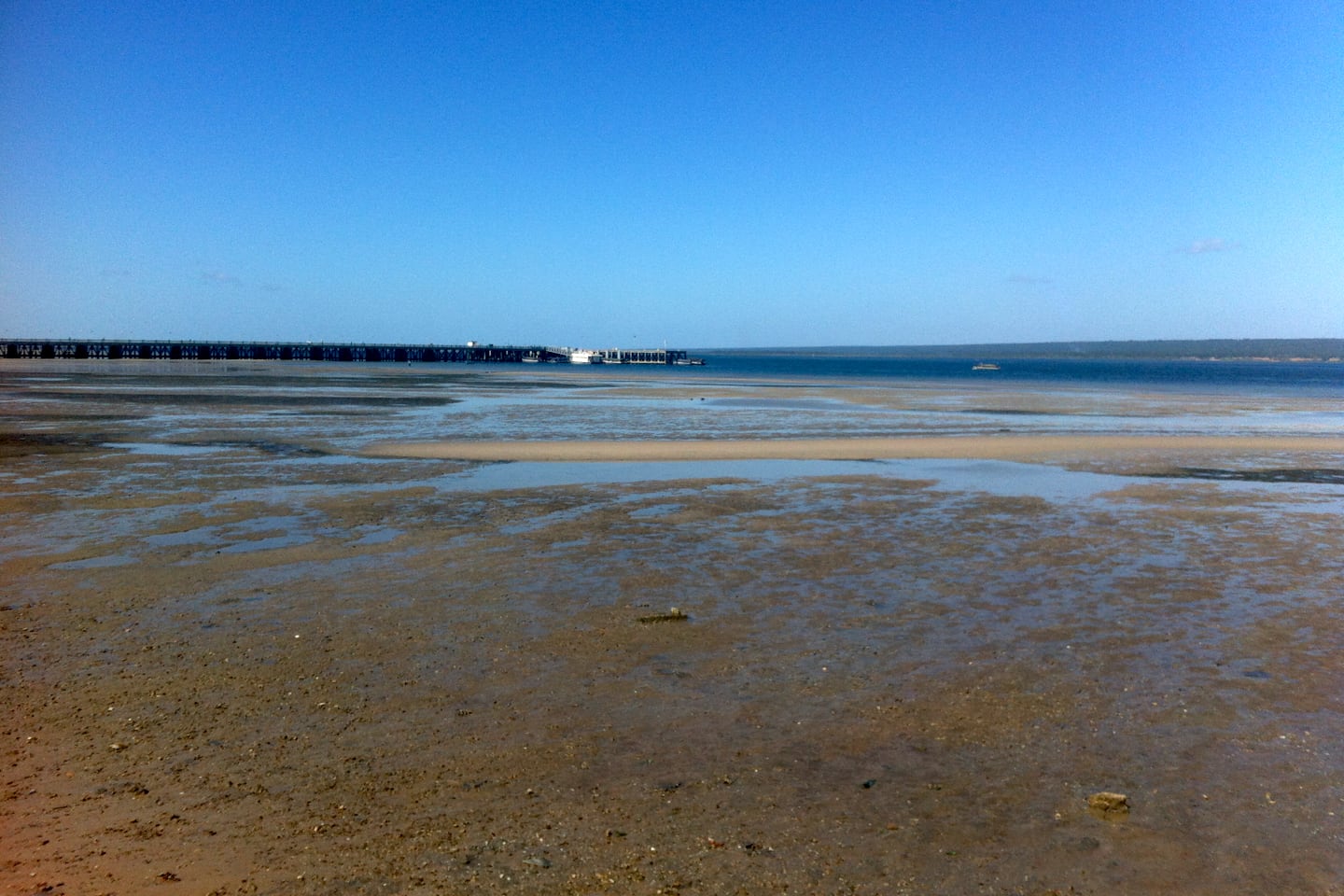 A random aside — we visited Inhambane during the full moon, which made Inhambane Bay’s tides seem much more pronounced than I remember. Above, the bay at low tide, and below, the bay at high tide. 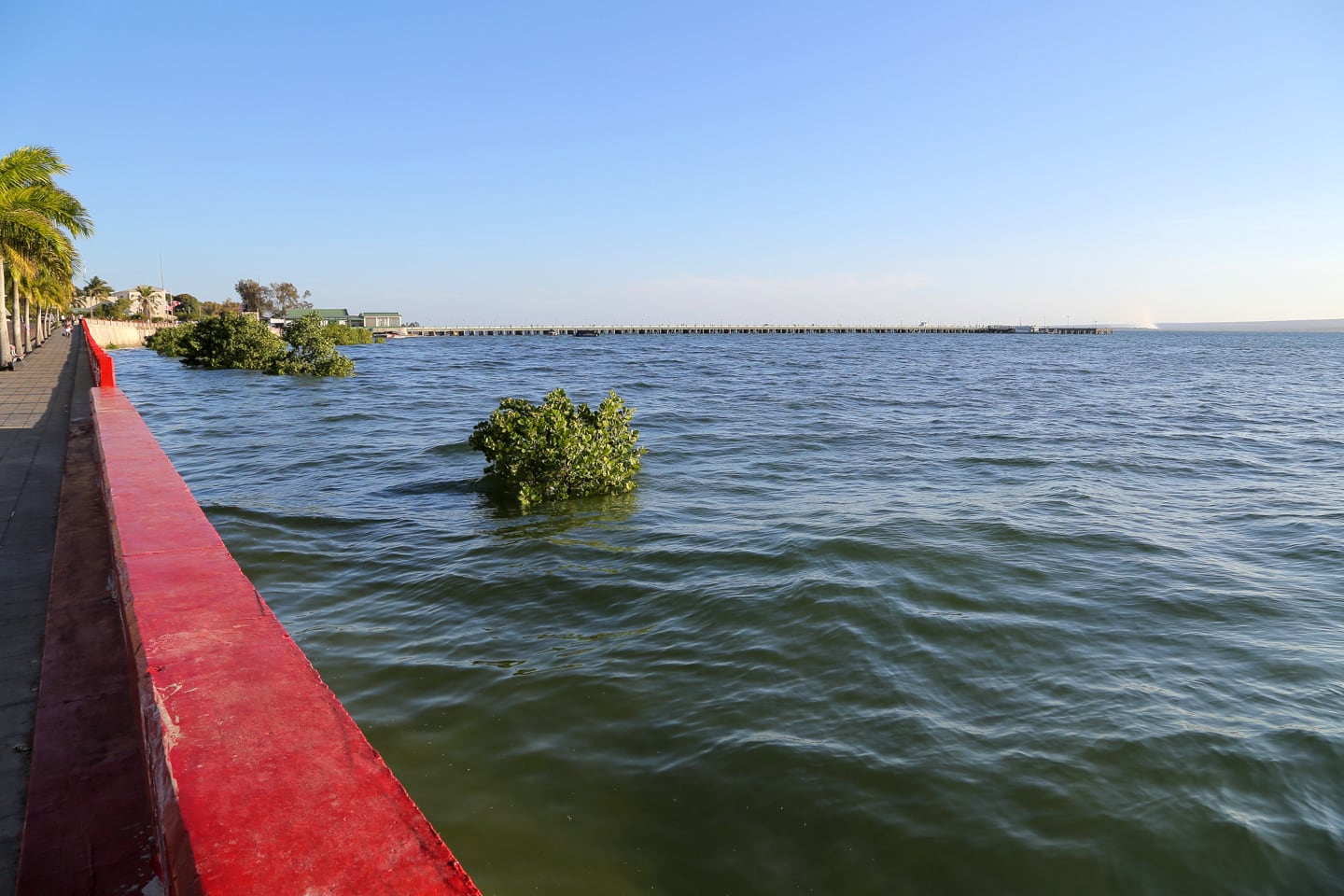 Finally, I leave you with two parting shots from our table at Bistro Pescador. It’s hard to beat an African sunset, but it’s nearly impossible to beat a sunset from this place. 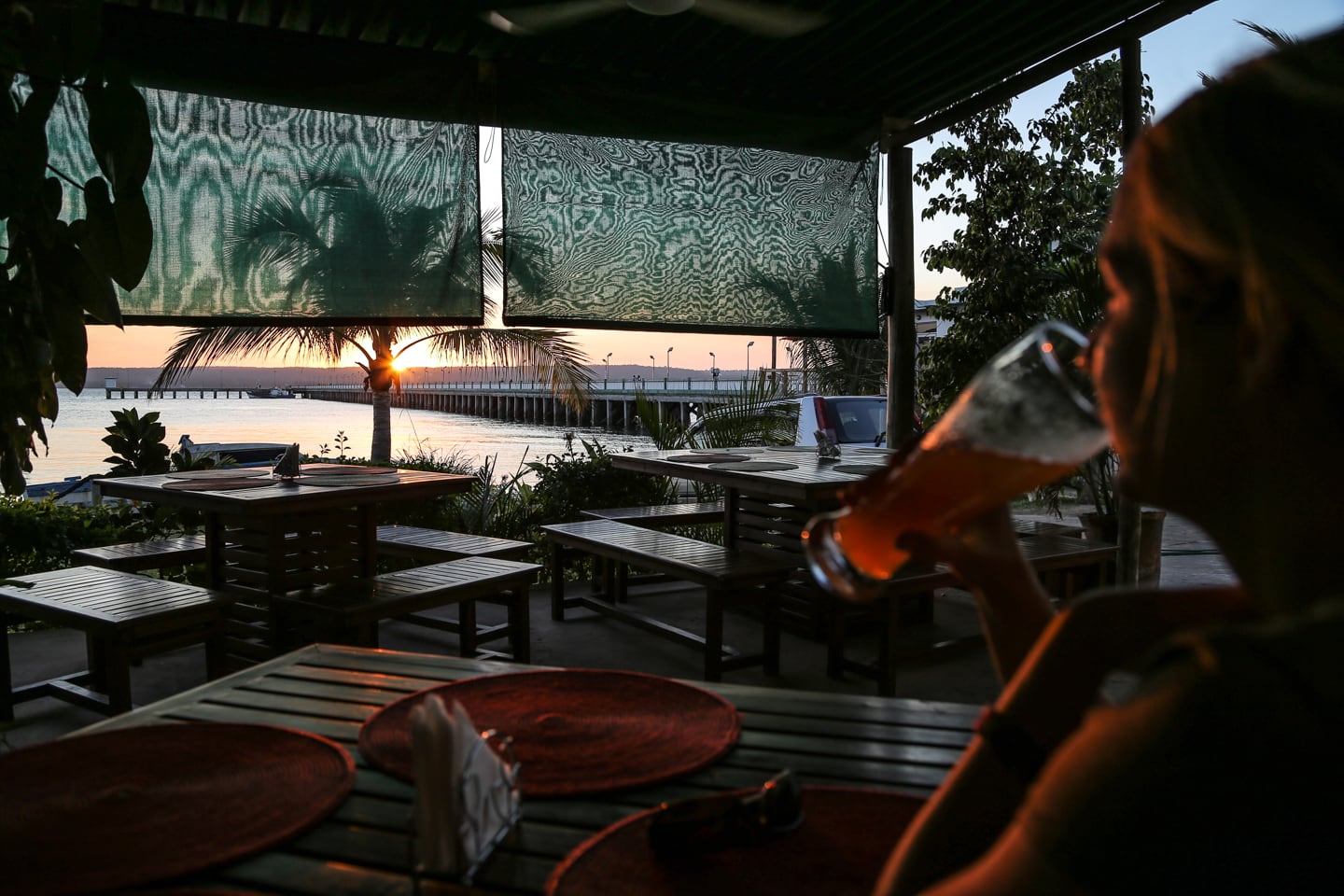 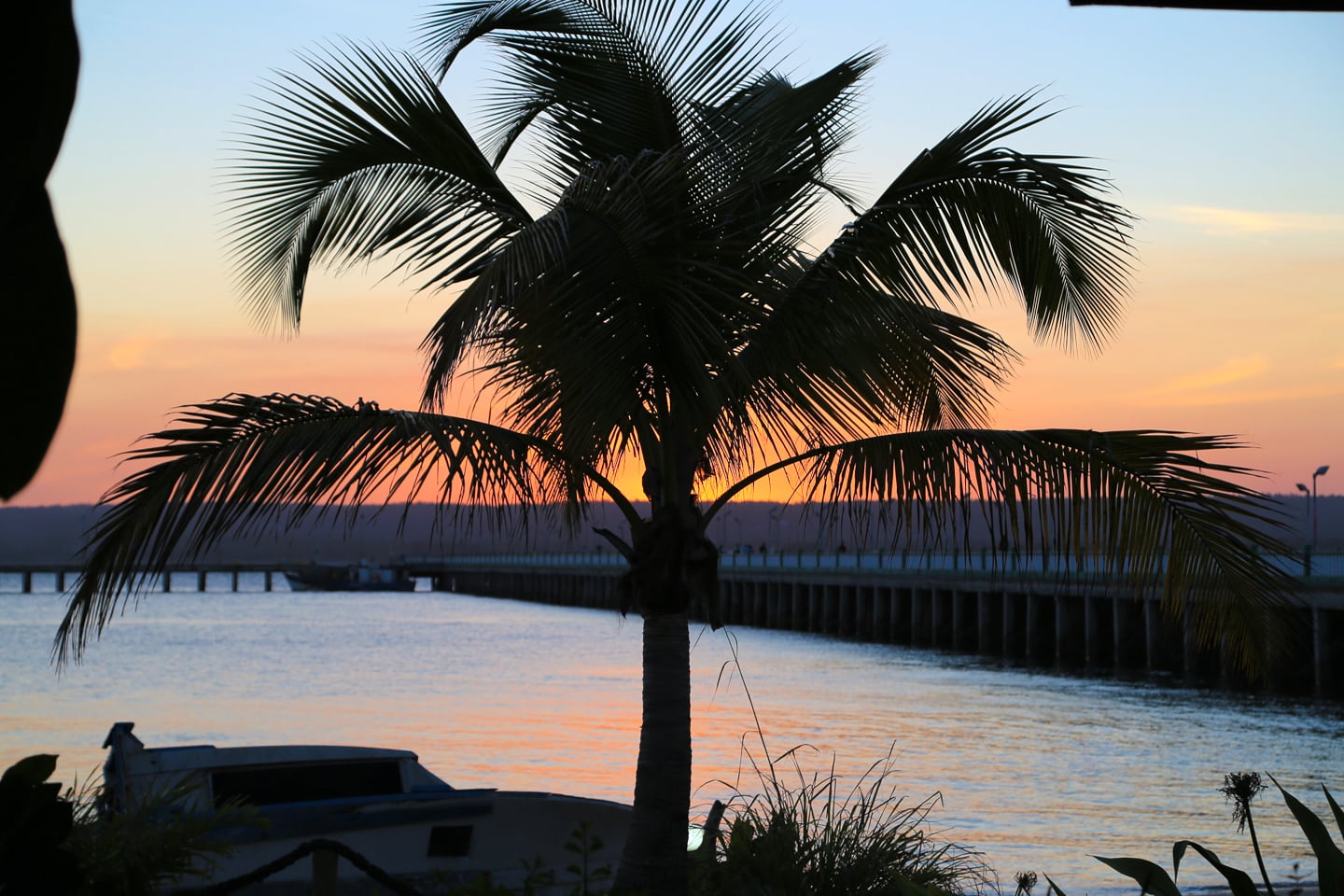 Certainly would like to visit there!
Happy that at least some of the old architecture survived!!!
Thank you for all of your wonderful writings!
as always, GM

The saga of the missing buses is certainly a mystery.