The rest of our stay on the island and Lori’s attempt at an important job interview in one of the world’s forgotten corners.

We arrived in Ilha de Moçambique expecting to stay three or four nights and liked it so much we ended up staying five. Well, we did like the place, but our decision to stay longer was also driven by a need to fill time in Mozambique.

After spending a day in Ilha, we decided that, although we had already cut out the Pemba to Dar es Salaam portion of the trip by buying a plane ticket for the 29th (the last day of our Mozambican visa), we really couldn’t stomach the effort it would take to get to the [very] remote island of Ibo in the Quirimbas by land and sea. We were perfectly satisfied with all that Ilha had to offer and just weren’t up for roughing it and having a more “cultural” experience on Ibo.

If we had come into Moz fresh (or not started this trip after a year living in the poorest district of a developing country) we might have been up for the adventure. But at this point, we were more than happy just to enjoy Ilha for a few more days and head directly to Pemba where we’d catch the flight in about a week. That meant that the legendary Quirimbas Islands would have to wait. But honestly, we really didn’t have the budget to make our stay worthwhile (they are quite expensive and exclusive, but supposed to be amazing). 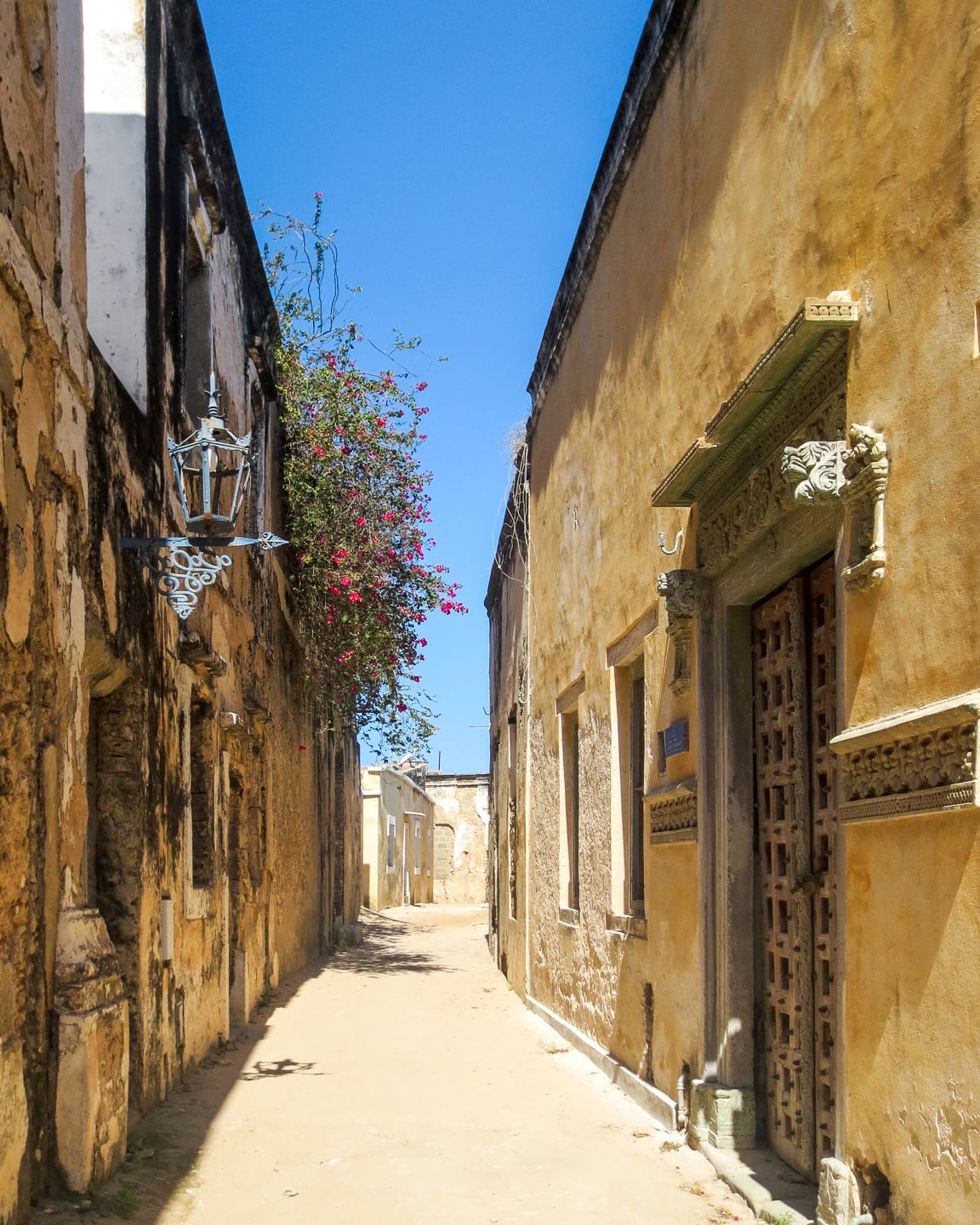 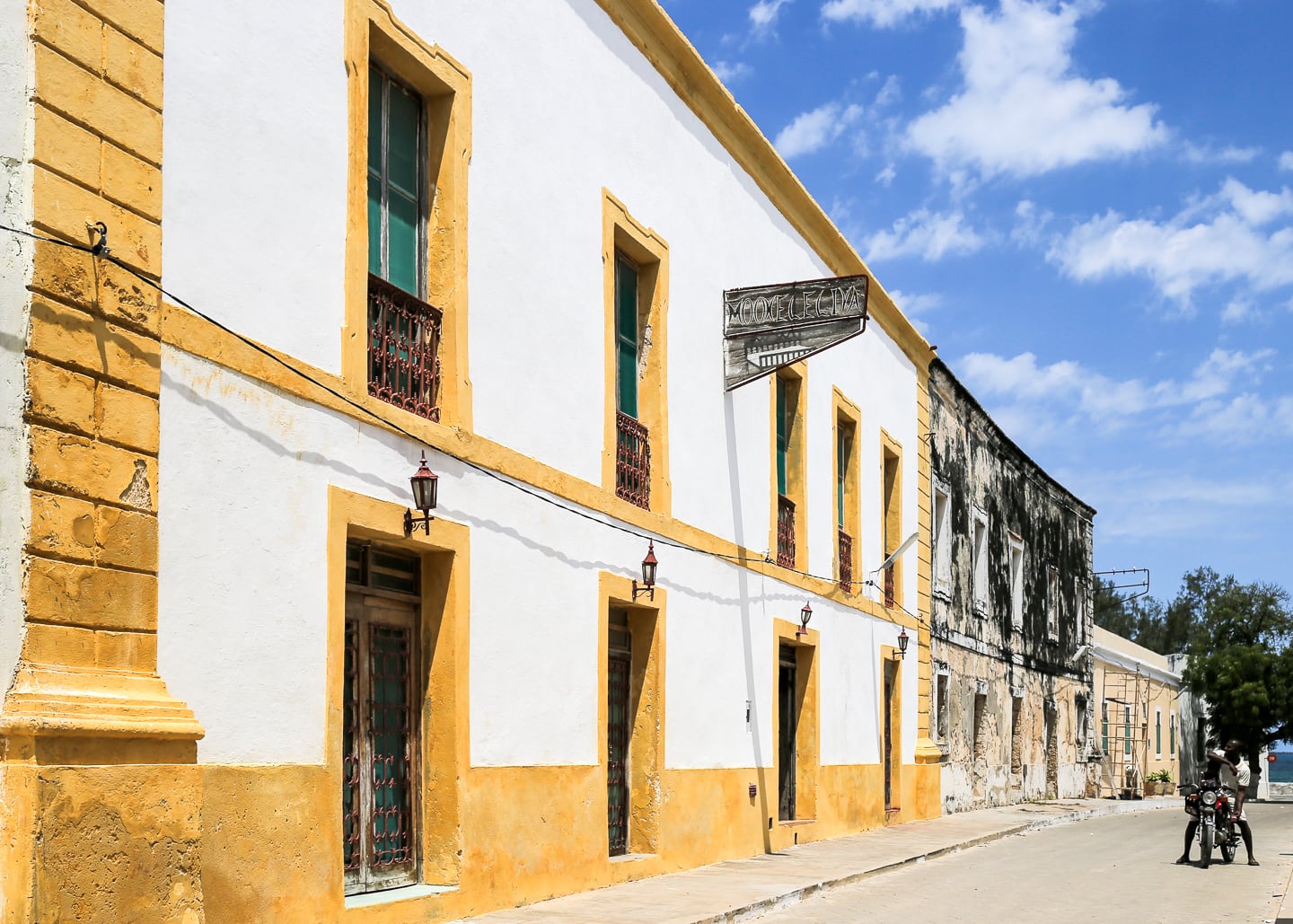 We spent five nights at Mooxeleliya Lodge (exterior pictured above) in the center of the Stone Town and would definitely recommend it to anyone looking to stay on Ilha. Really can’t say enough good things about this place. It’s a lodge in a a restored old Portuguese homestead with period furniture. Mooxeleliya, by the way, means “Did you sleep well?”

We actually intended to stay at Casa Branca (and thought we had actually made reservations there) but upon arrival, a kindly older woman led us to Mooxeleliya. Apparently Casa Branca was closed at the moment and the two lodges are both related in some way. I think we had actually made reservations at Mooxeleliya but there was a mix up in what they had said over the phone in English versus what they said in Portuguese. Nonetheless, we were very happy with how things ended up. Plus, the staff (all dudes) at Mooxeleliya are incredibly helpful, courteous and kind (though they don’t speak English so it helps if you speak the Portuguese…though I will warn you, the Portuguese spoken on Ilha is something else — very, very fast). 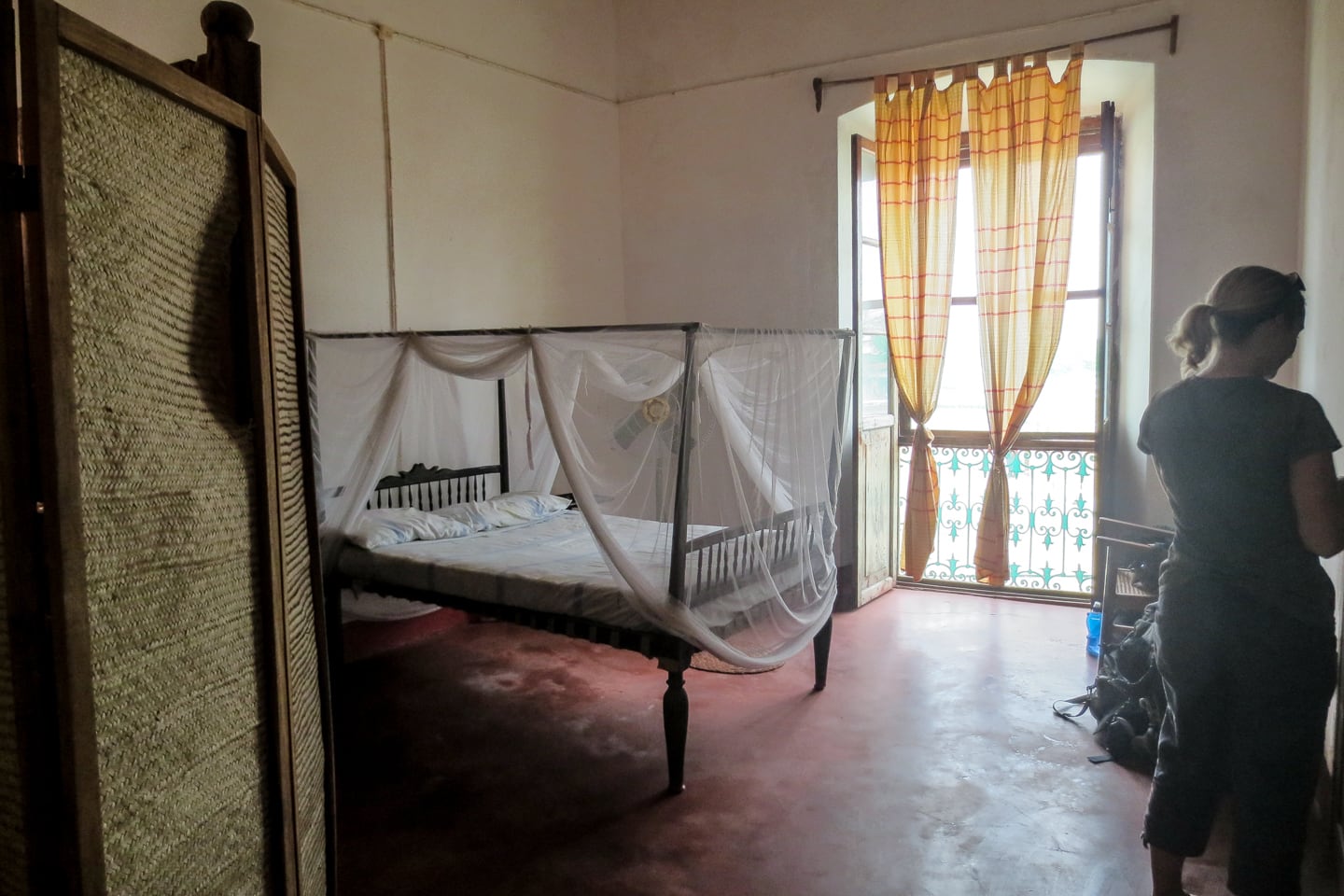 The lodge is right down the street from the Church of the Misericordia, the Palace Museum and the pier. Our room had a cool false-balcony style window that looked out onto the action below. 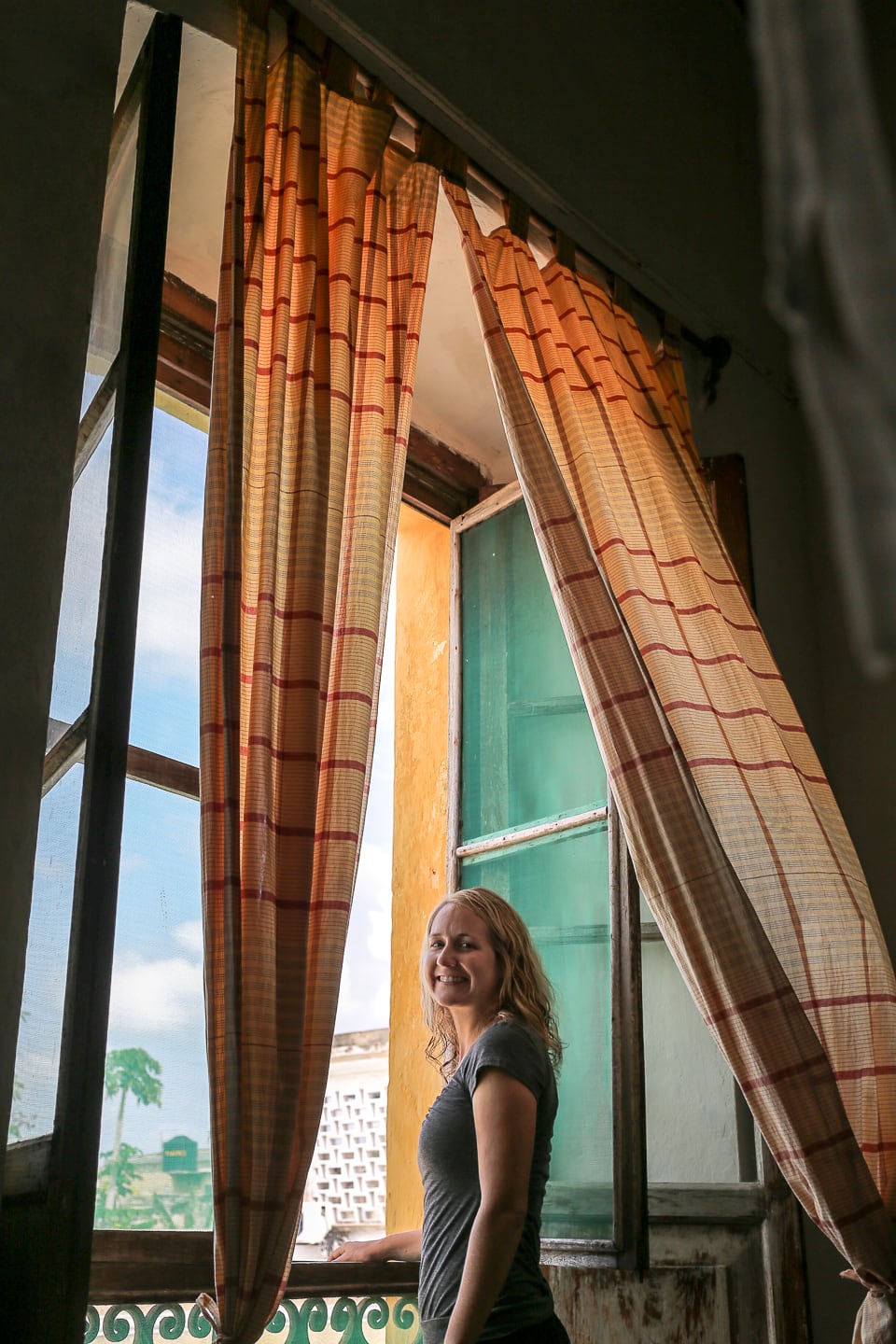 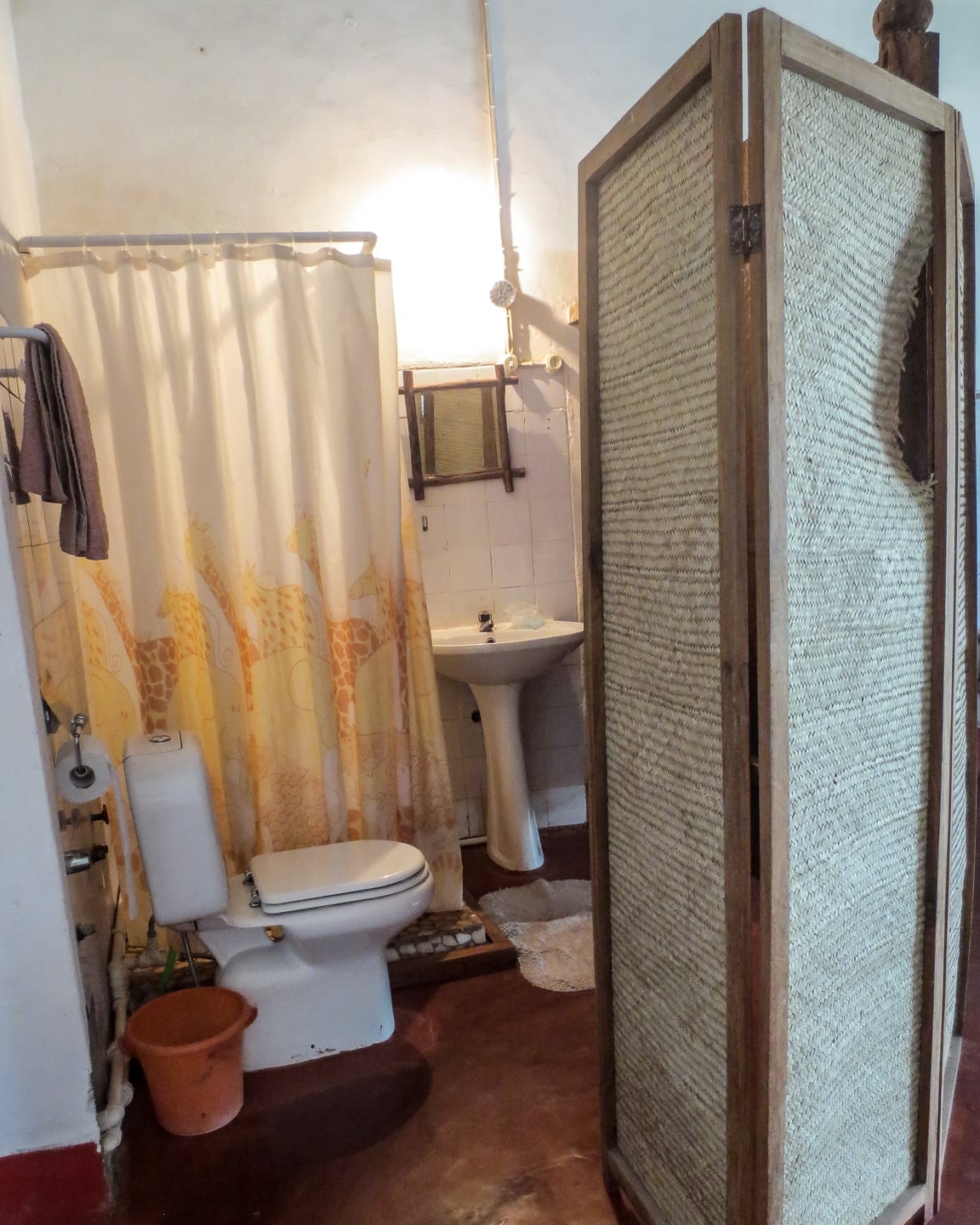 …and when I say en-suite, I mean, it’s literally in the room (sectioned off by a Japanese screen). 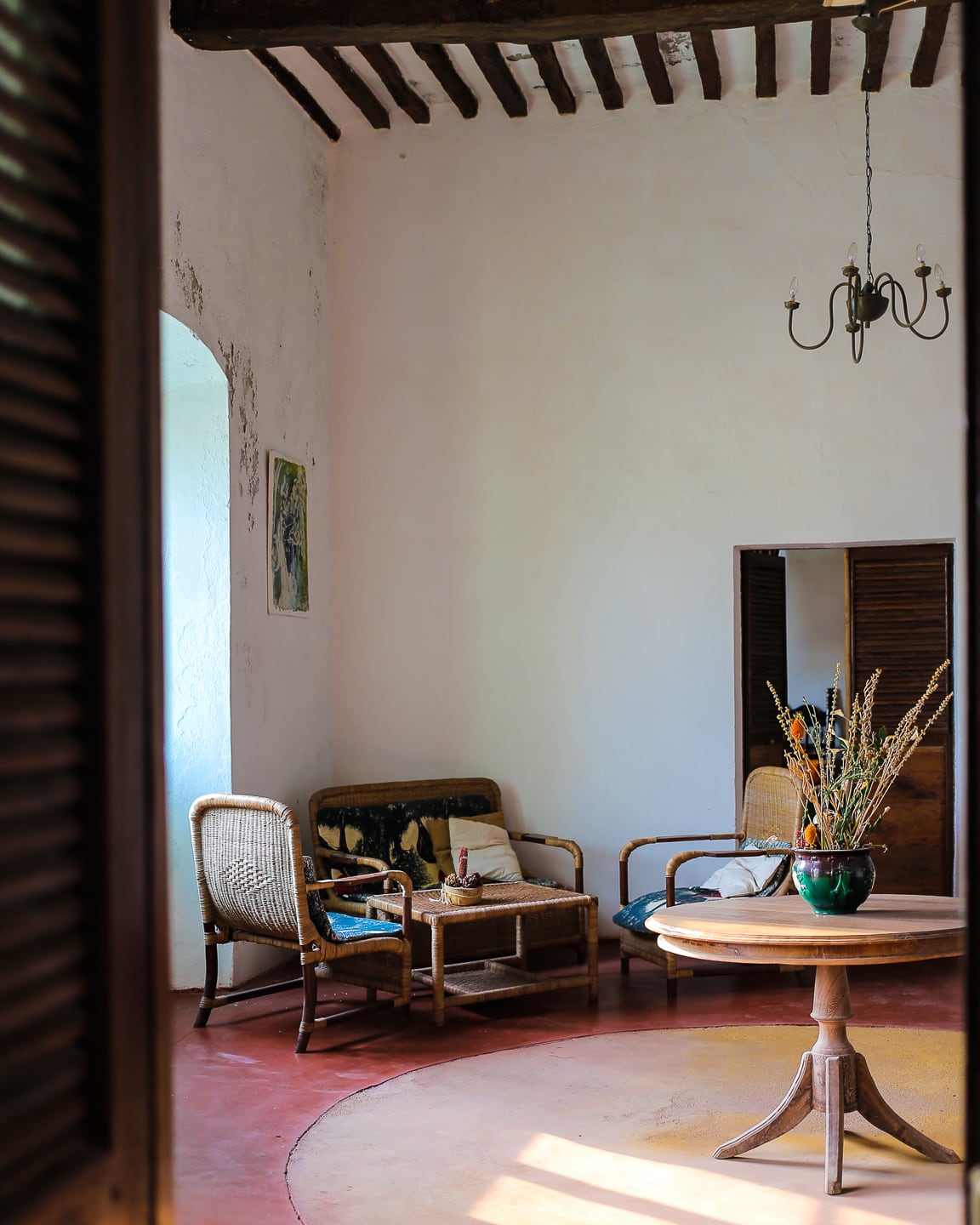 The room also opened up into a grand parlor common area. 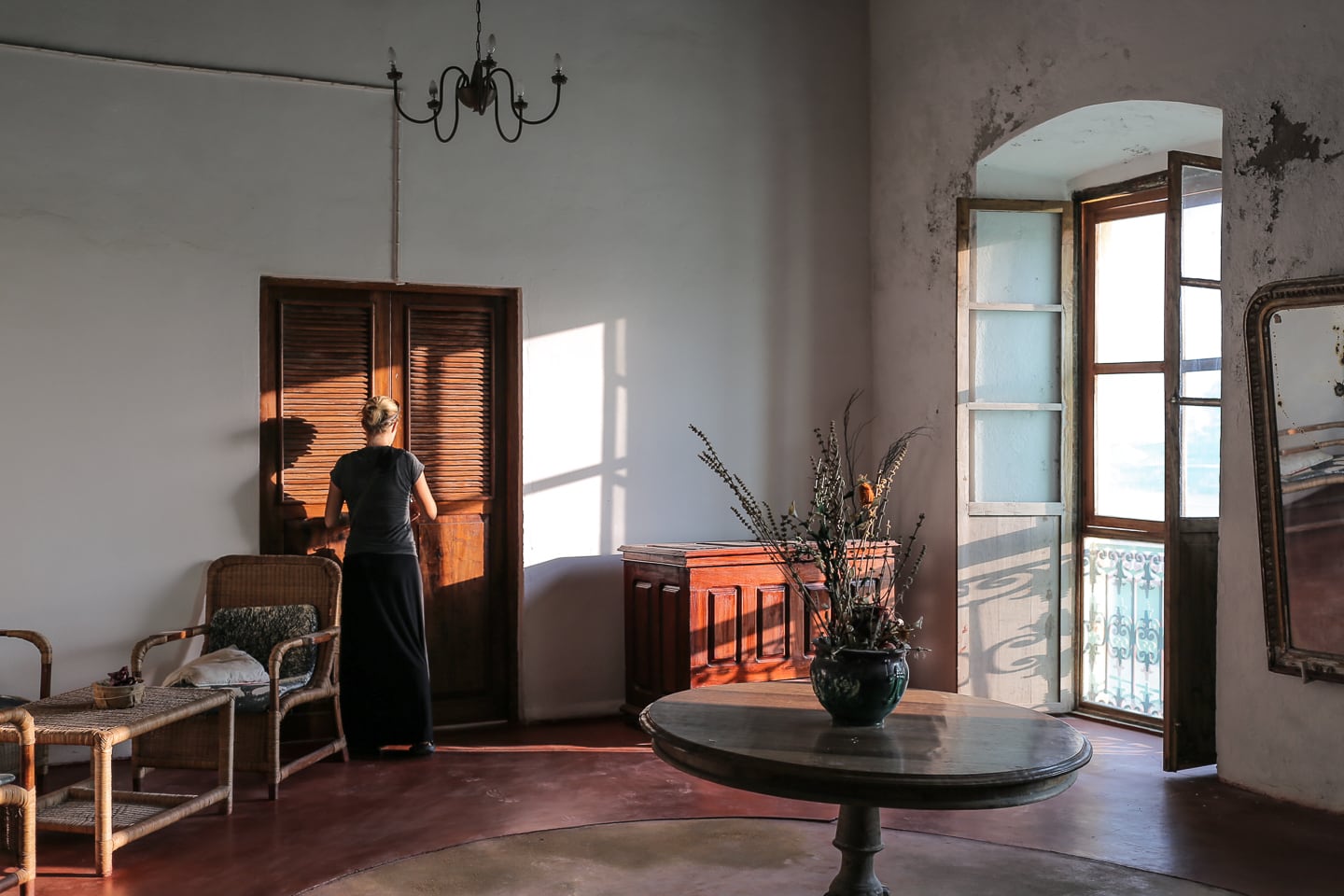 Breakfast was included with the price of the room and generally consisted of fried eggs, Portuguese bread and tea/coffee (pretty standard traveler’s breakfast in Moz), and was served in their indoor dining room or lovely outdoor garden dining area. 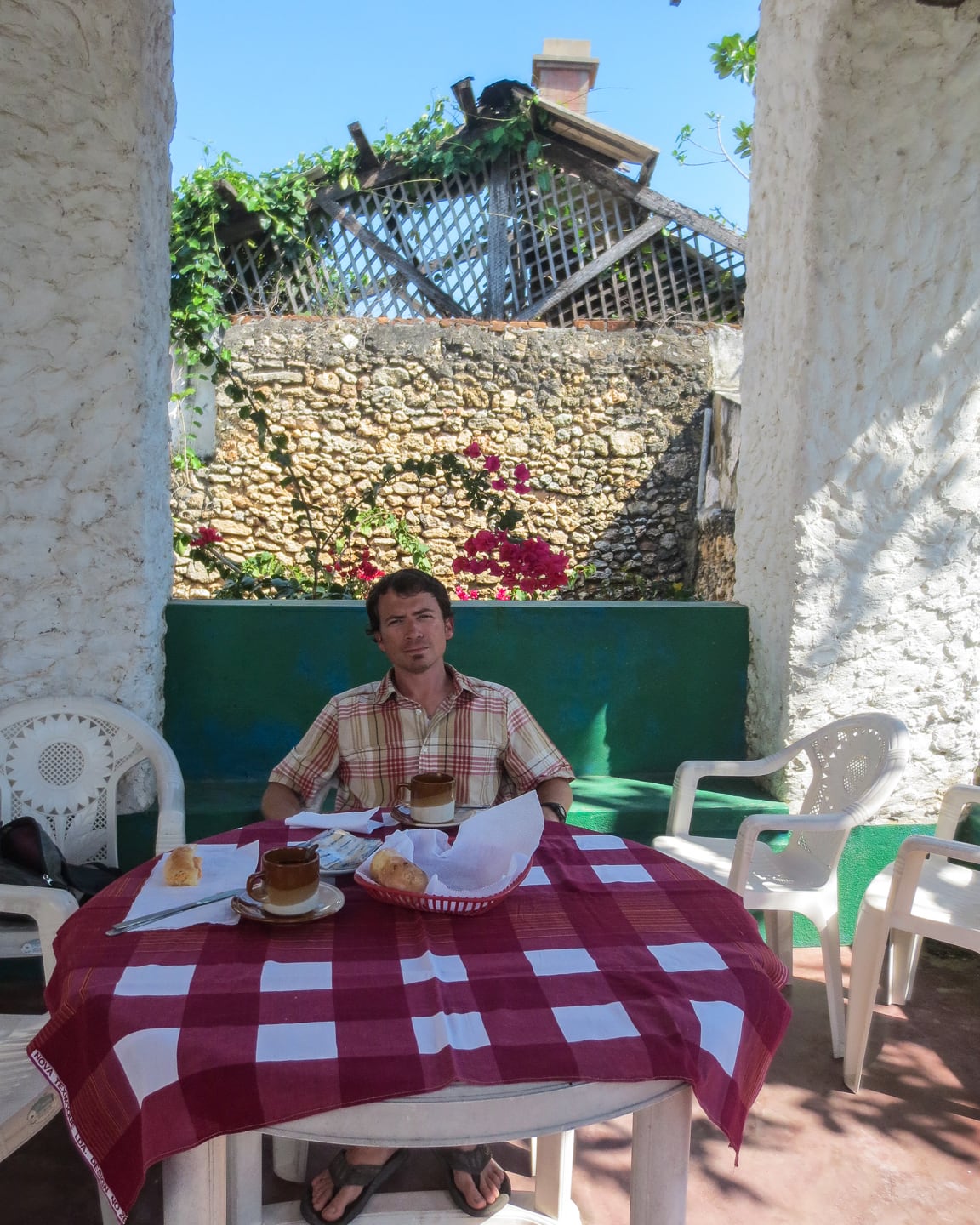 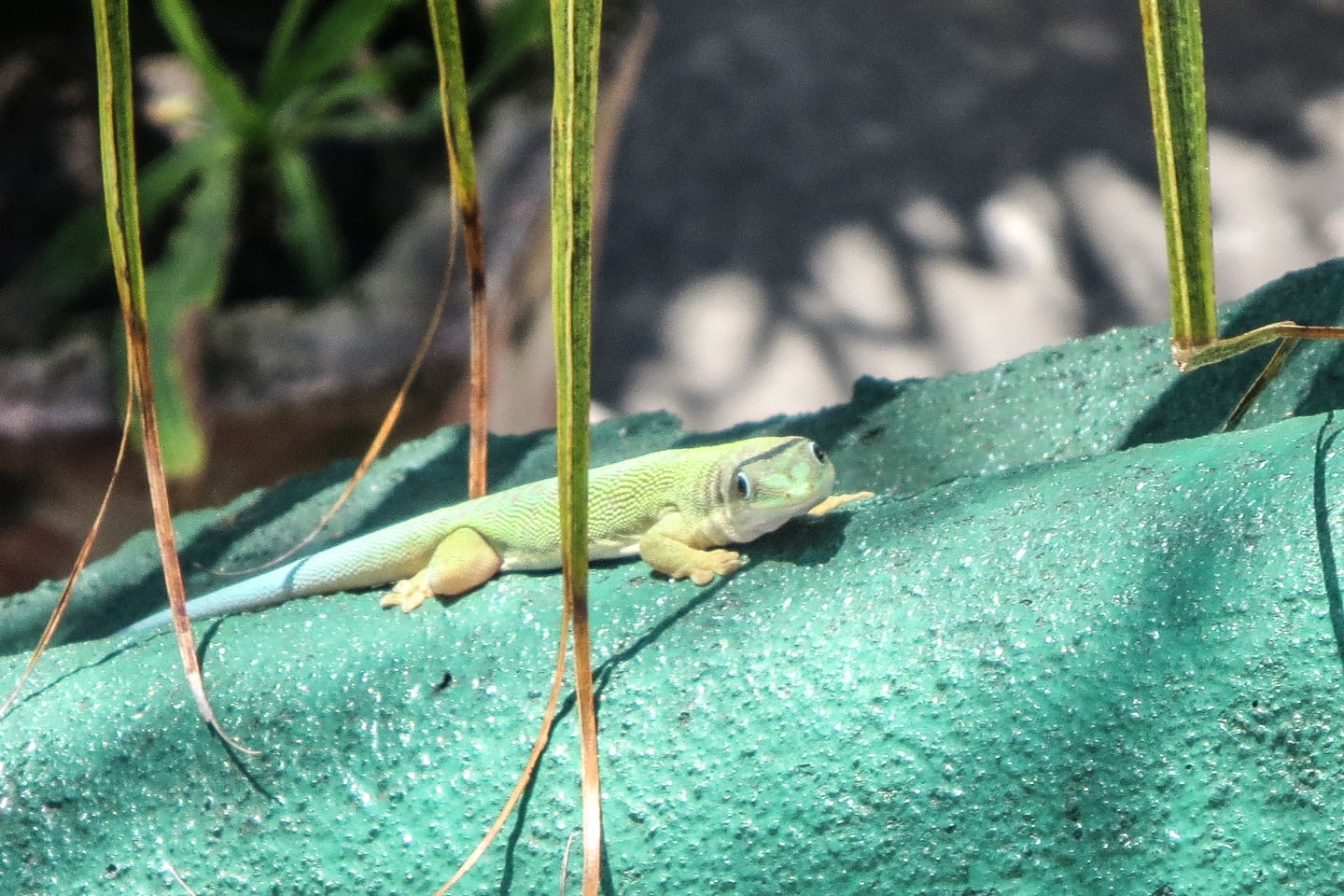 This creep liked to watch us eat. 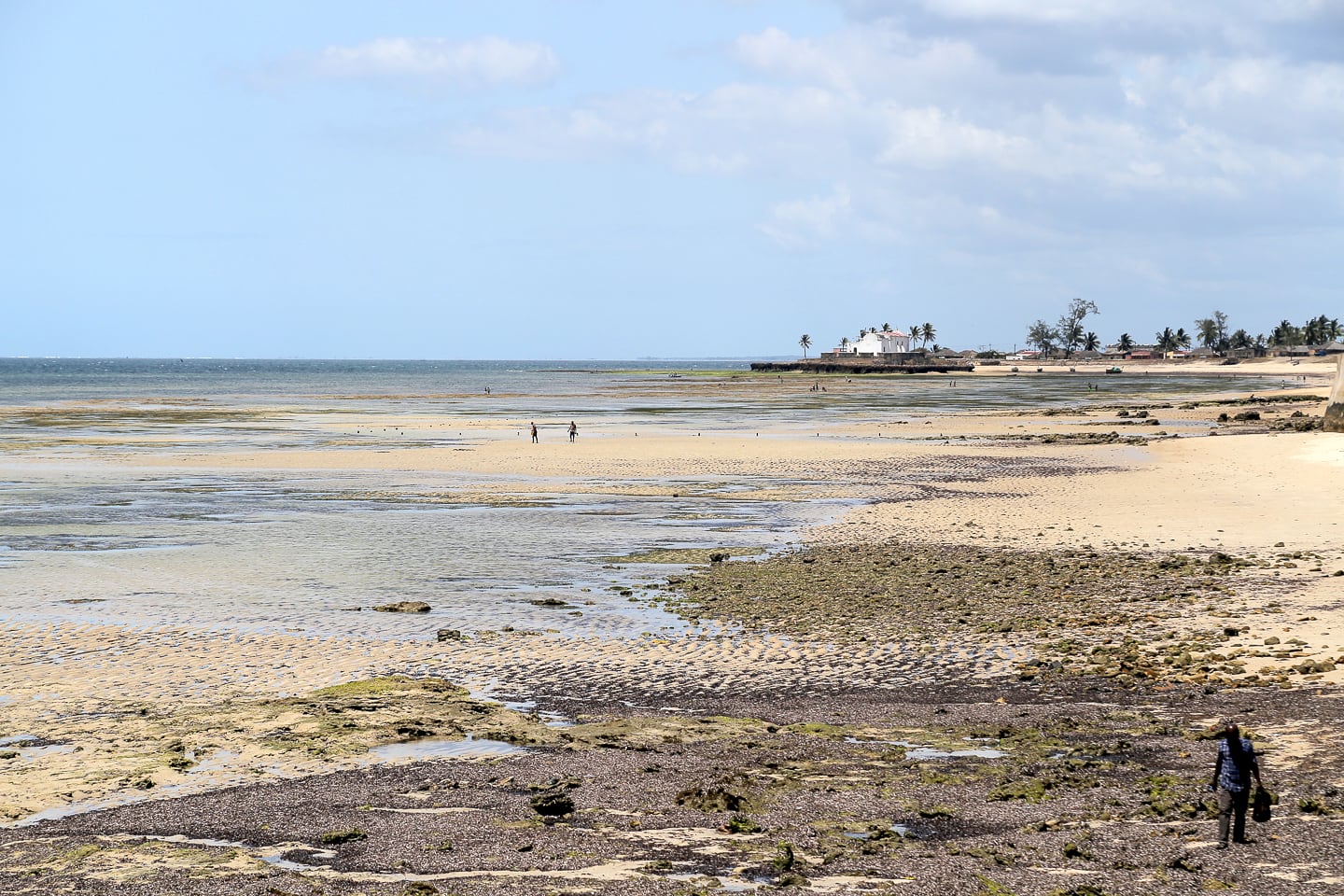 The difference between low tide and high tide on Ilha was staggering. At low tide, it seems that half the village is out on the seabed fishing, clamming, seaweeding or just strolling about. At high tide, the water completely covers the entire area (above) by several feet. 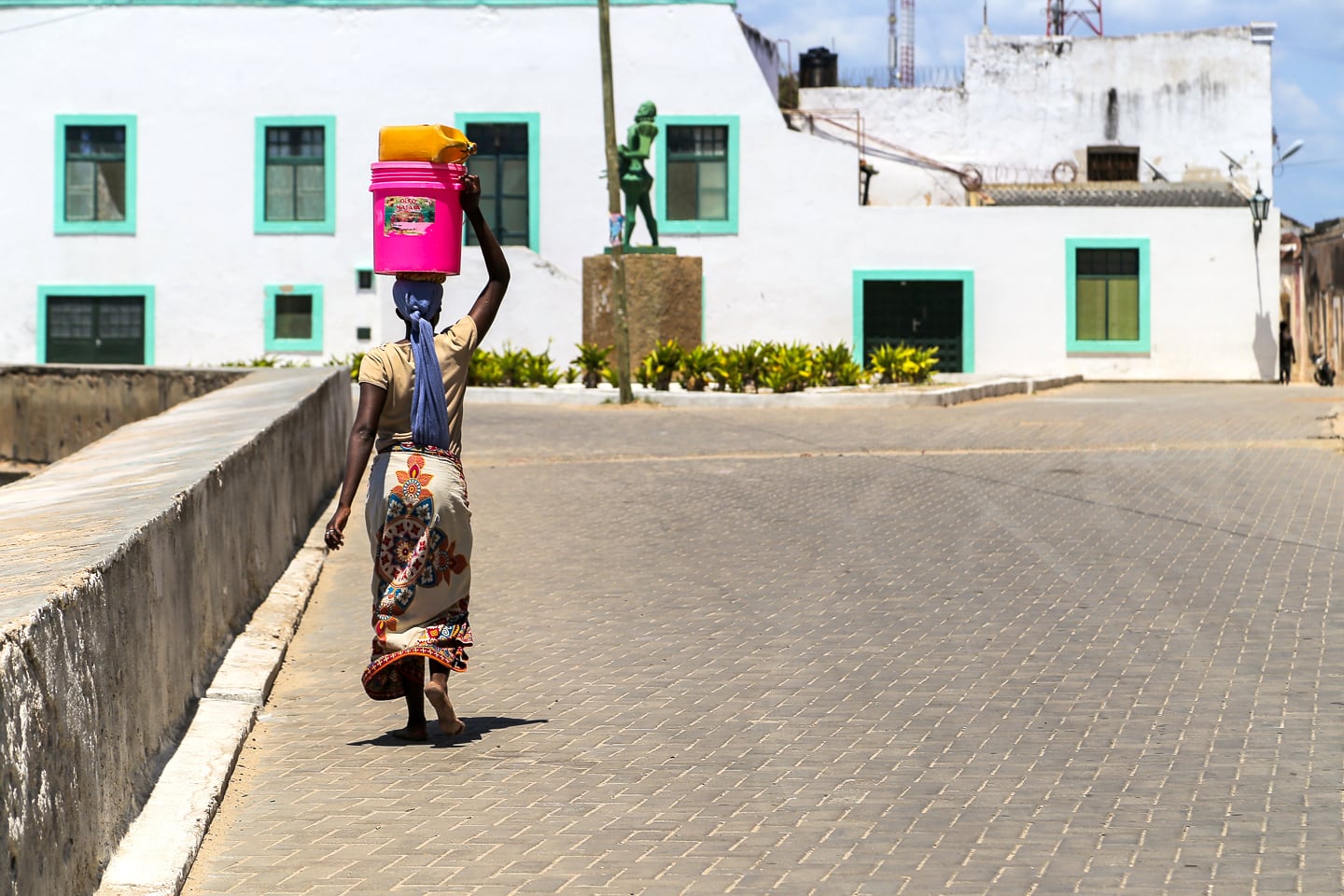 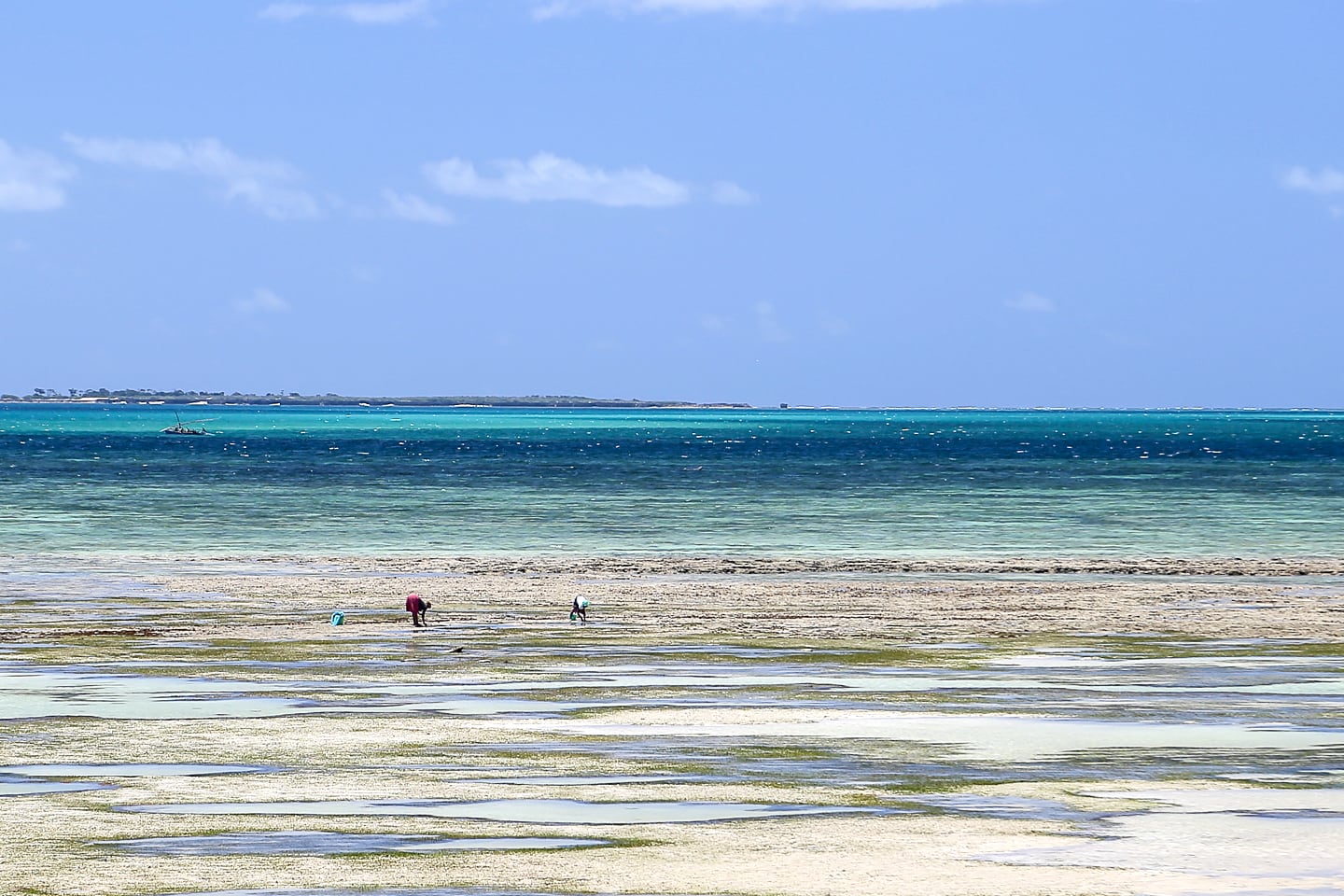 The water around the island is crystal clear and a bazilion beautiful shades of blue. However, it’s not really suitable for swimming from the shore (certainly not on the eastern/windward side), as the entire town’s waste eventually makes it to the seashore in some form or another.

Remember, this ain’t some small fishing village, but a town of 14,000 people concentrated on an island 3km long by 200-500m wide. Many of the beaches are strewn with trash, sewage and everything in between (like dirty diapers).

So if you do go swimming, it’s advisable to take a kayak or dhow and go out far (or visit one of the beaches on the nearby mainland). We did see a visiting couple swimming near the fort and the water looked pretty clean, so that might be a good bet, but there are so many other nice (and pristine) beaches in Moz, I don’t know why you’d really need to swim off Ilha. 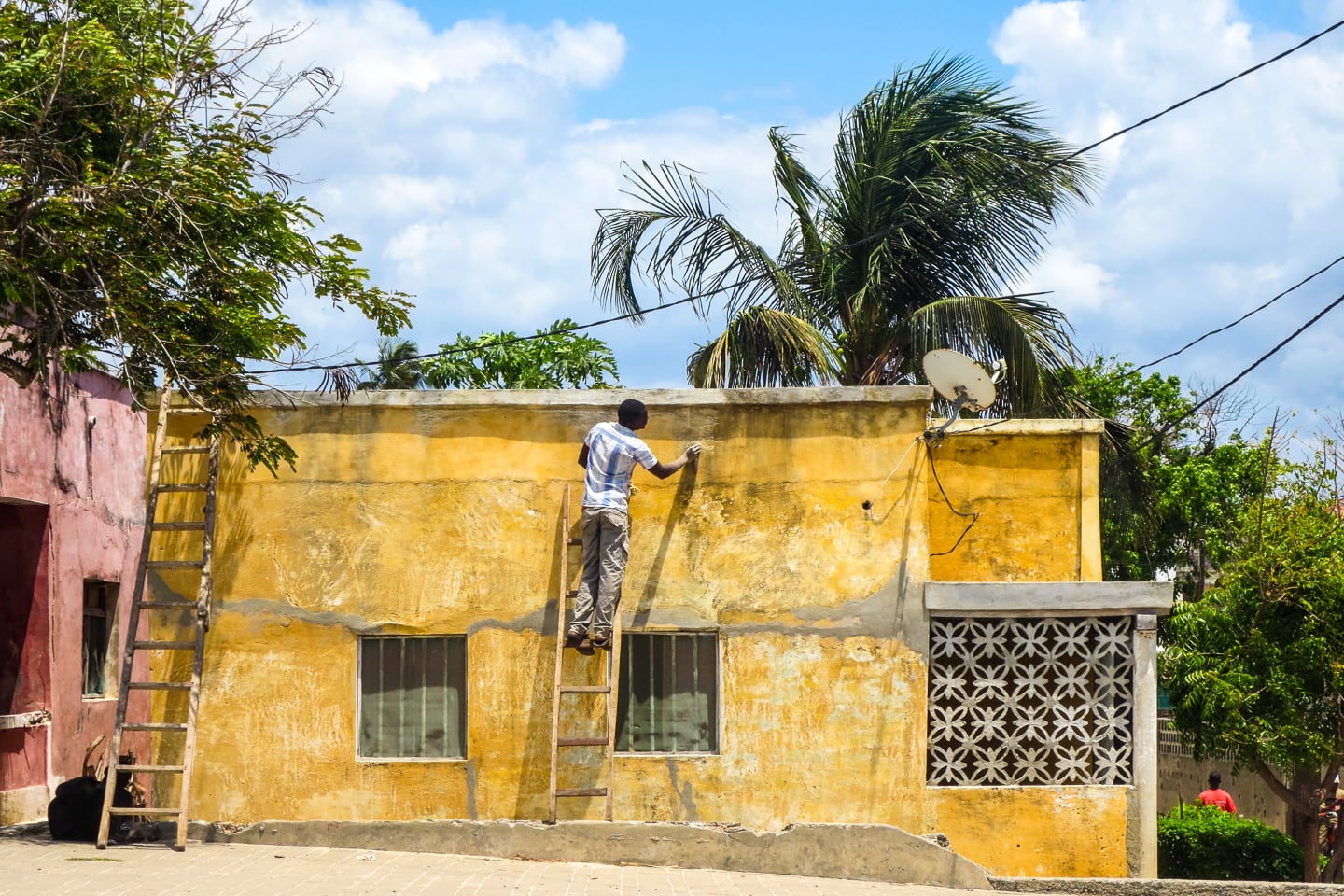 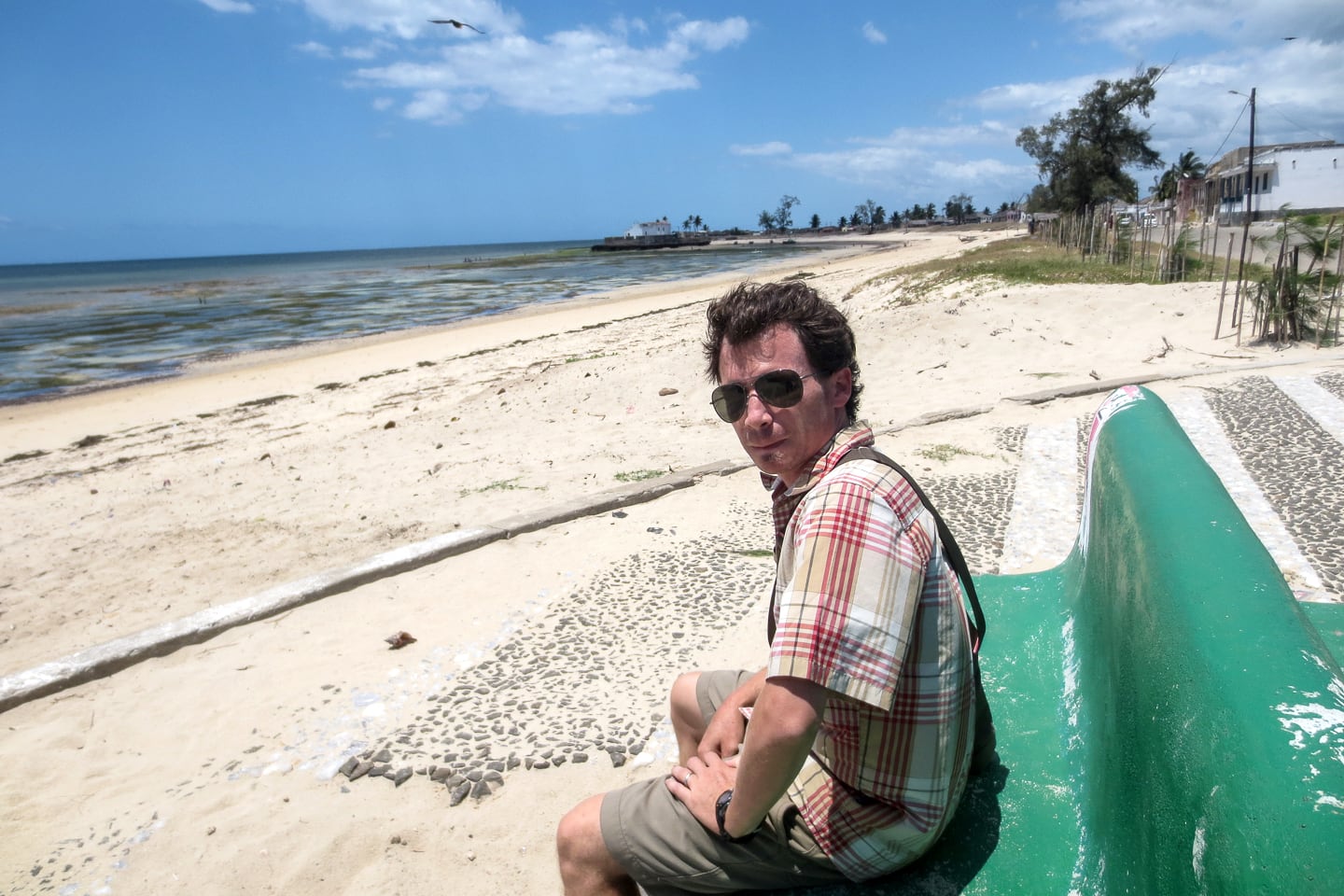 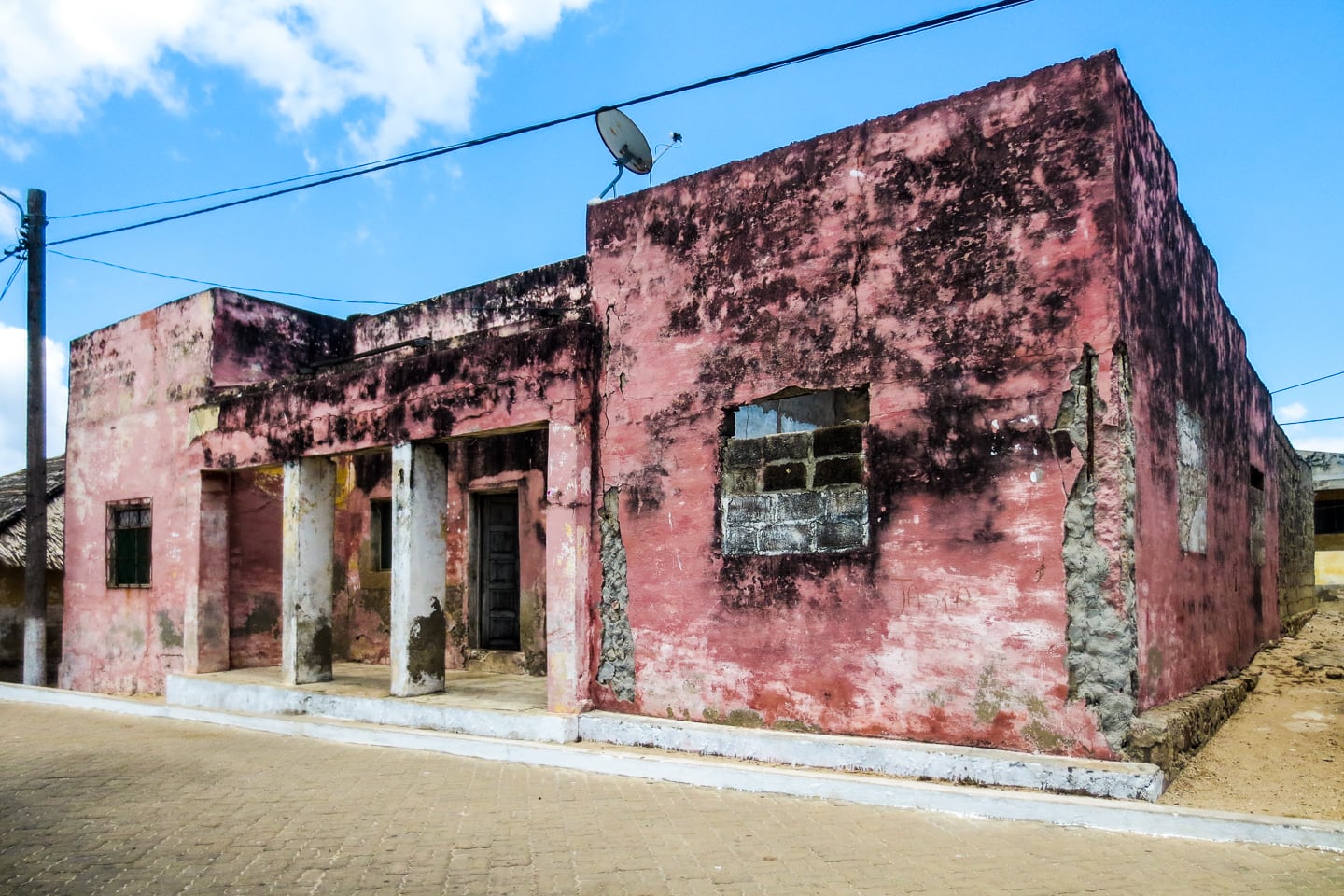 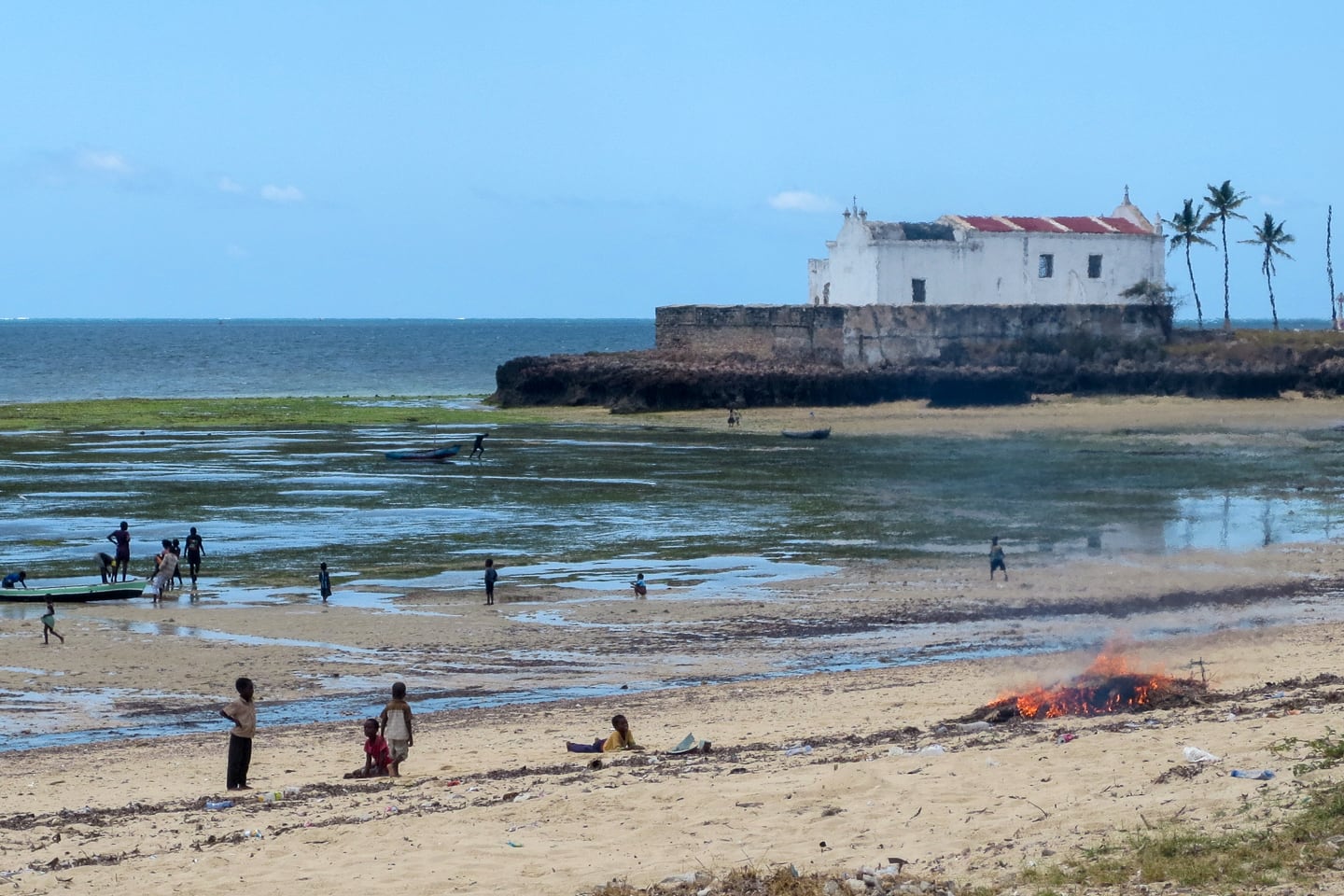 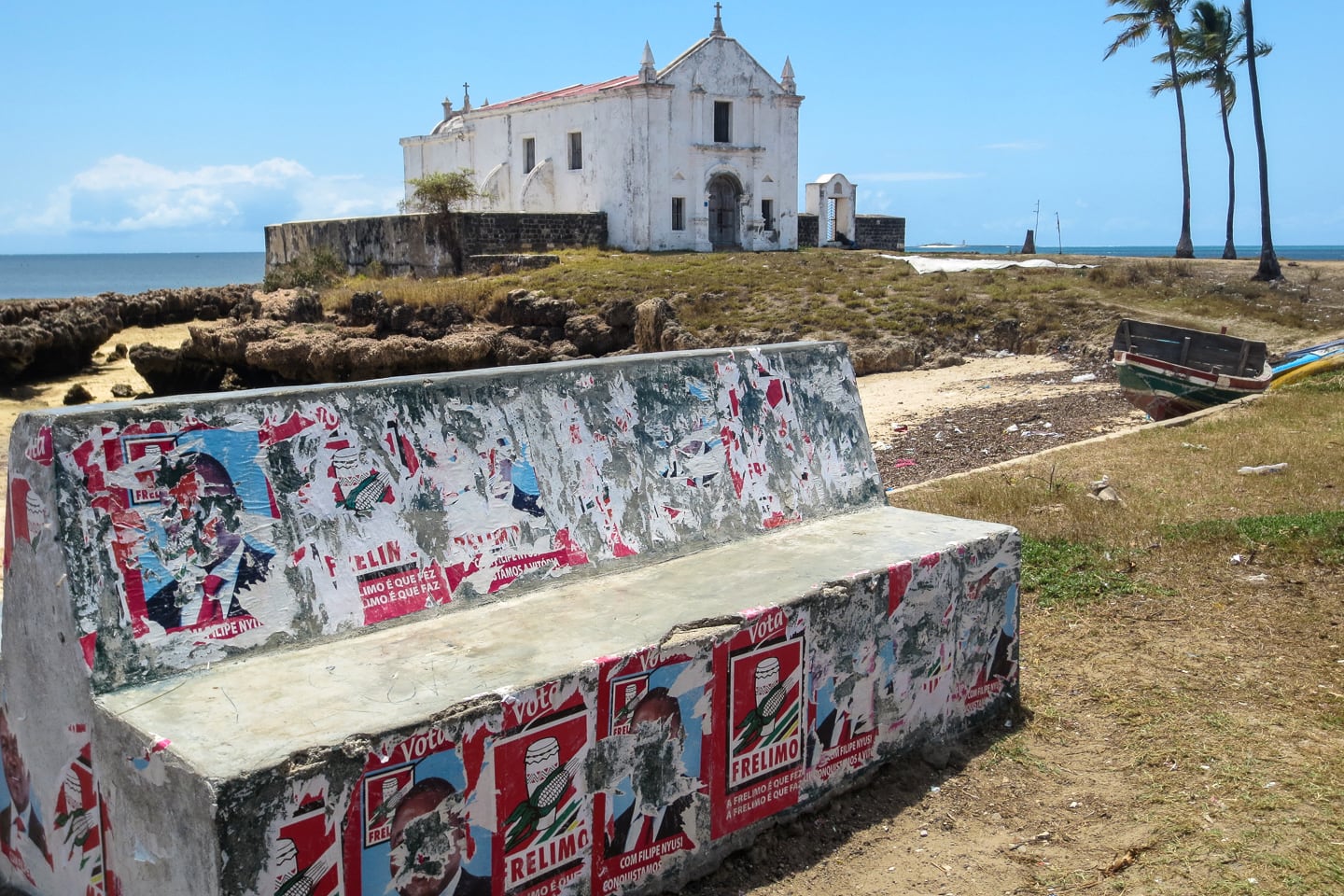 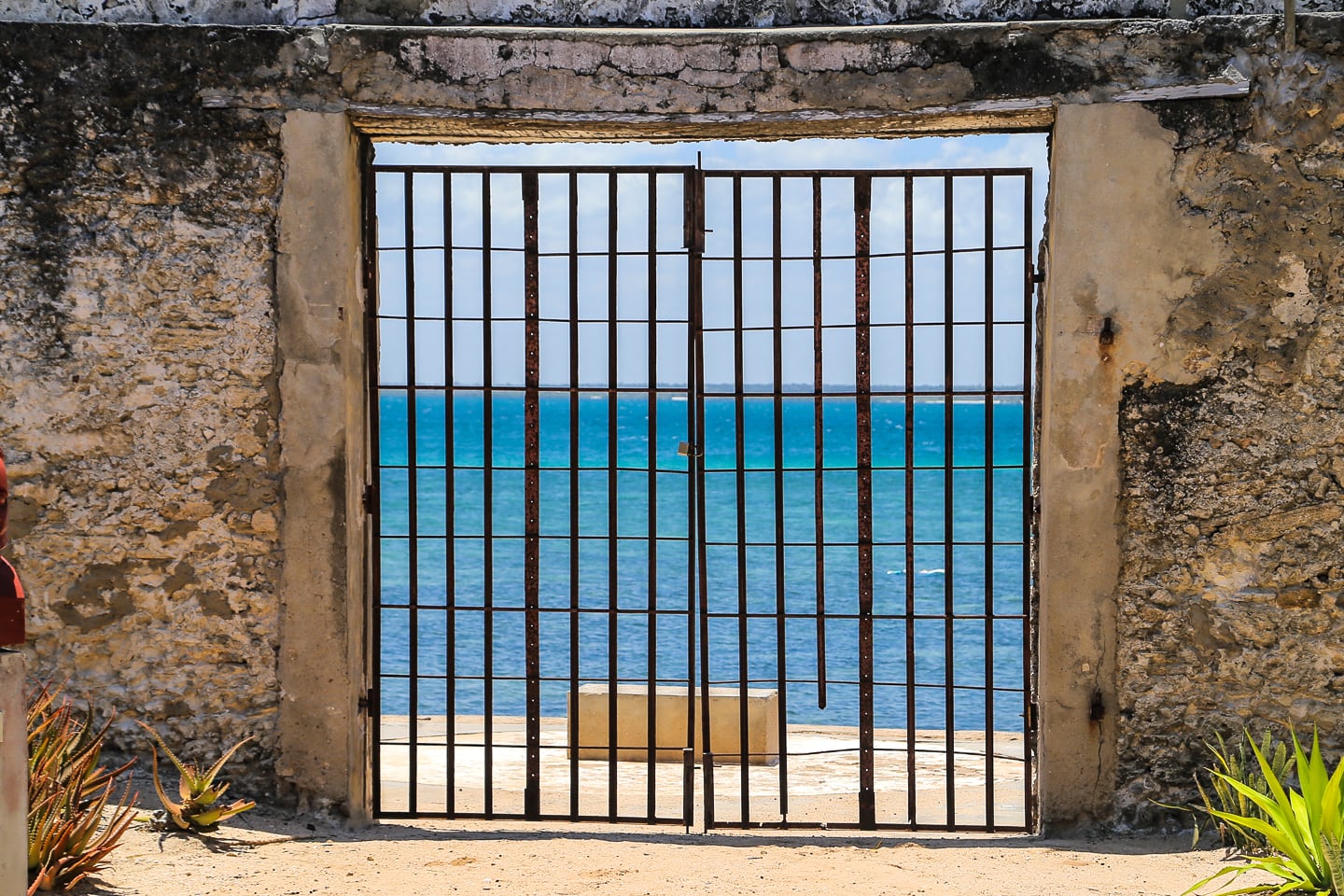 These are the gates through which nearly a million Mozambican slaves passed on their way out of Mozambique (most headed to the Americas) — basically the last view that these people saw before stepping off their homeland for the final time. 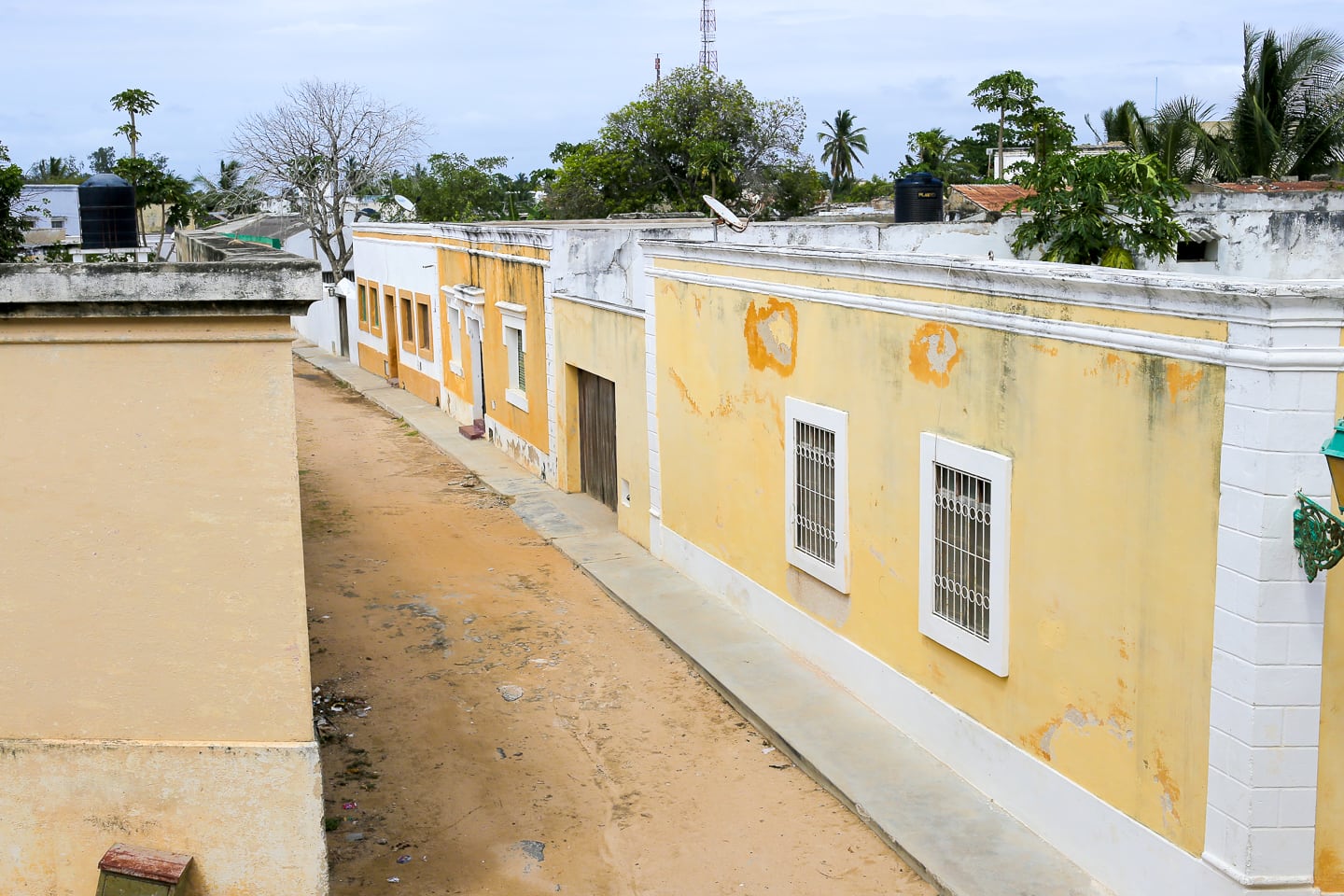 The view from our room at Mooxeleliya (above). 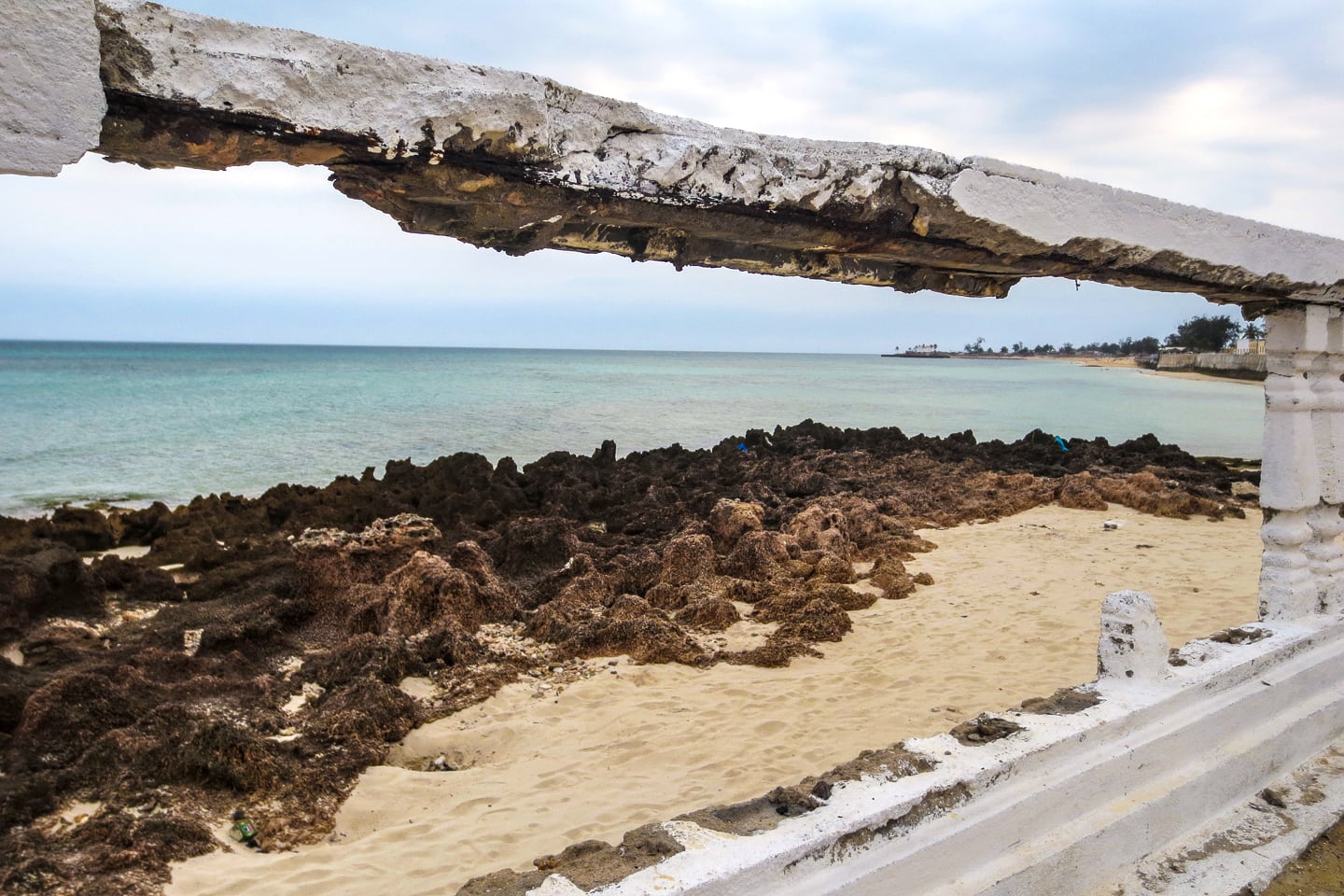 As you may recall from a previous post, Lori had a job interview via Skype scheduled for 2pm local time. Wifi was difficult, if impossible, to manage on the island. A very few restaurants offered wifi, but the service was generally very slow or non-existent (a lot…of…w-a-i-t-i-……..).

This was the second of three interviews Lori would have with the organization (they don’t mess around!). The first interview (in Nampula) was conducted by an HR specialist in Belgium (one of Handicap International’s head offices). The purpose of that interview was your basic sort of screening for crazies, I guess — which is to say Lori barely scraped by

The second interview (this one) was with a technical specialist (an MD) in France. If she passed this one, the third and final interview would be conducted by the field managers in Laos (essentially, her future bosses, if she got the job). Mind you, just getting a call back after submitting the application for this particular position was a big deal, and they had already cut a few candidates, so Lori was both buoyed and made nervous by this information.

She left me at a restaurant (where I was busy writing another gripping AwayGoWe.com post — she doesn’t much like me being anywhere near her when she’s interviewing for these sorts of things) and headed back to our room with my iPhone. As you may remember from a previous post, I had managed to get internet on my phone in Moz (a huge victory!) but it just so happened on this day that the phone service was fading in and out, which had the unfortunate effect of draining the phone battery! Lori got back to the room about 10 minutes before the interview and went to open skype, but the phone was completely dead! No problem…the charger was nearby. However, when my old iPhone 4 ups and dies, it takes about 10 minutes of charging to resuscitate it (it won’t power on or anything during this period). Furthermore, the phone charger wouldn’t seat itself in the outlet to charge without Lori holding it (under a table). Needless to say, all of this made for a very stressful few minutes leading up to the call.

In the end, the phone powered on, the interview went well and the interviewee was none the wiser. About 45 minutes after she left me, Lori returned with a big smile and filled me in about her little crisis. Just another day budget backpacking through Mozambique… 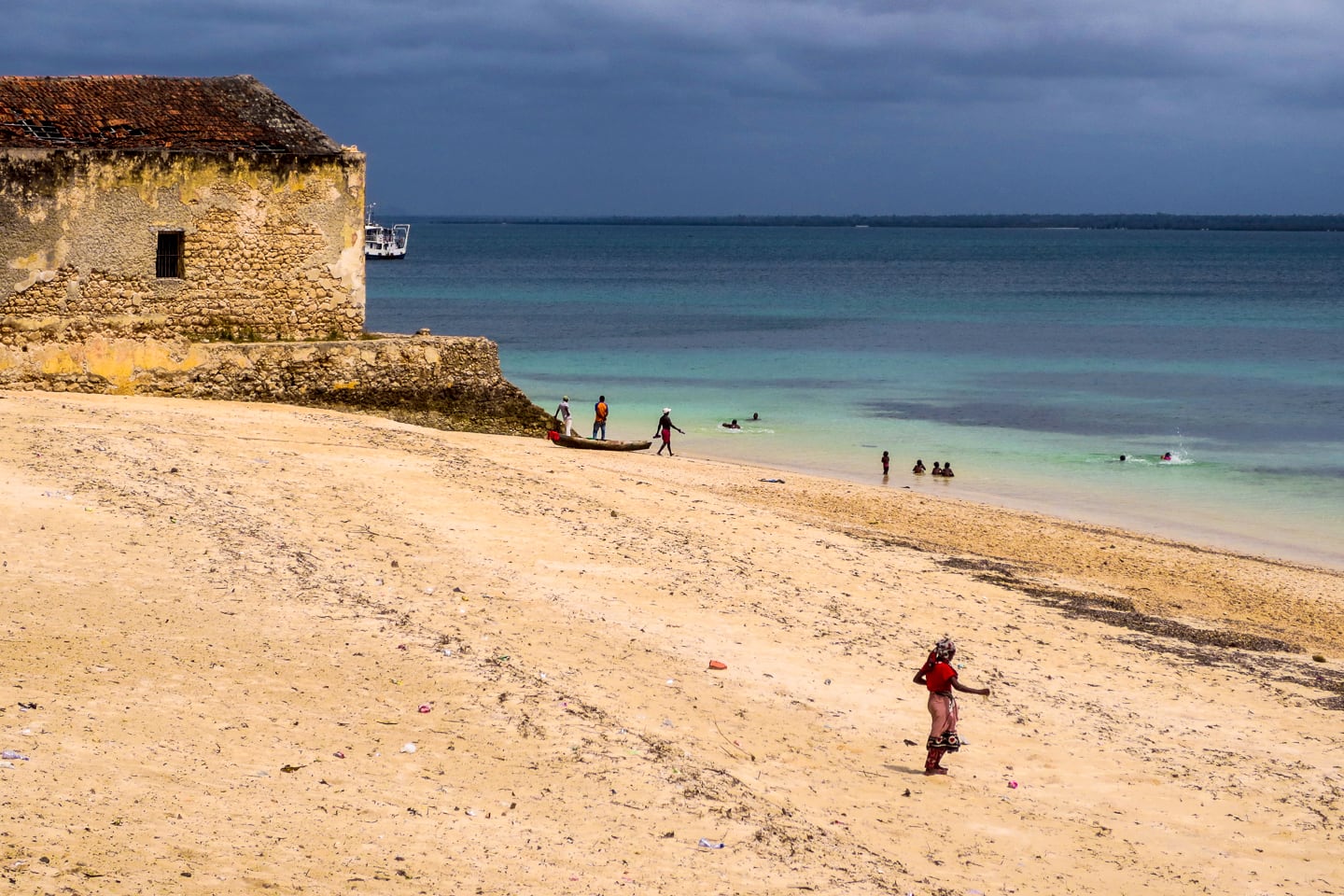 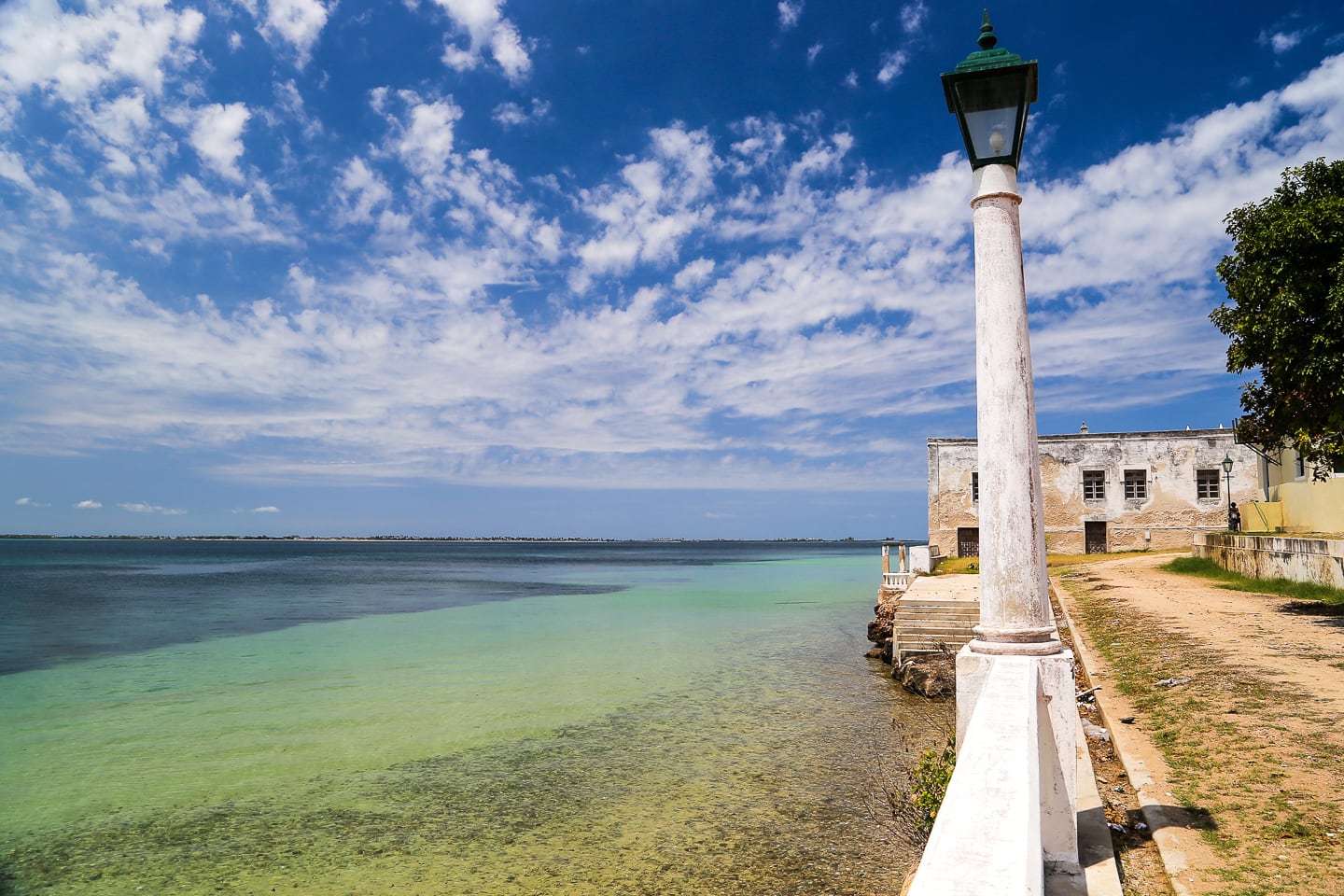 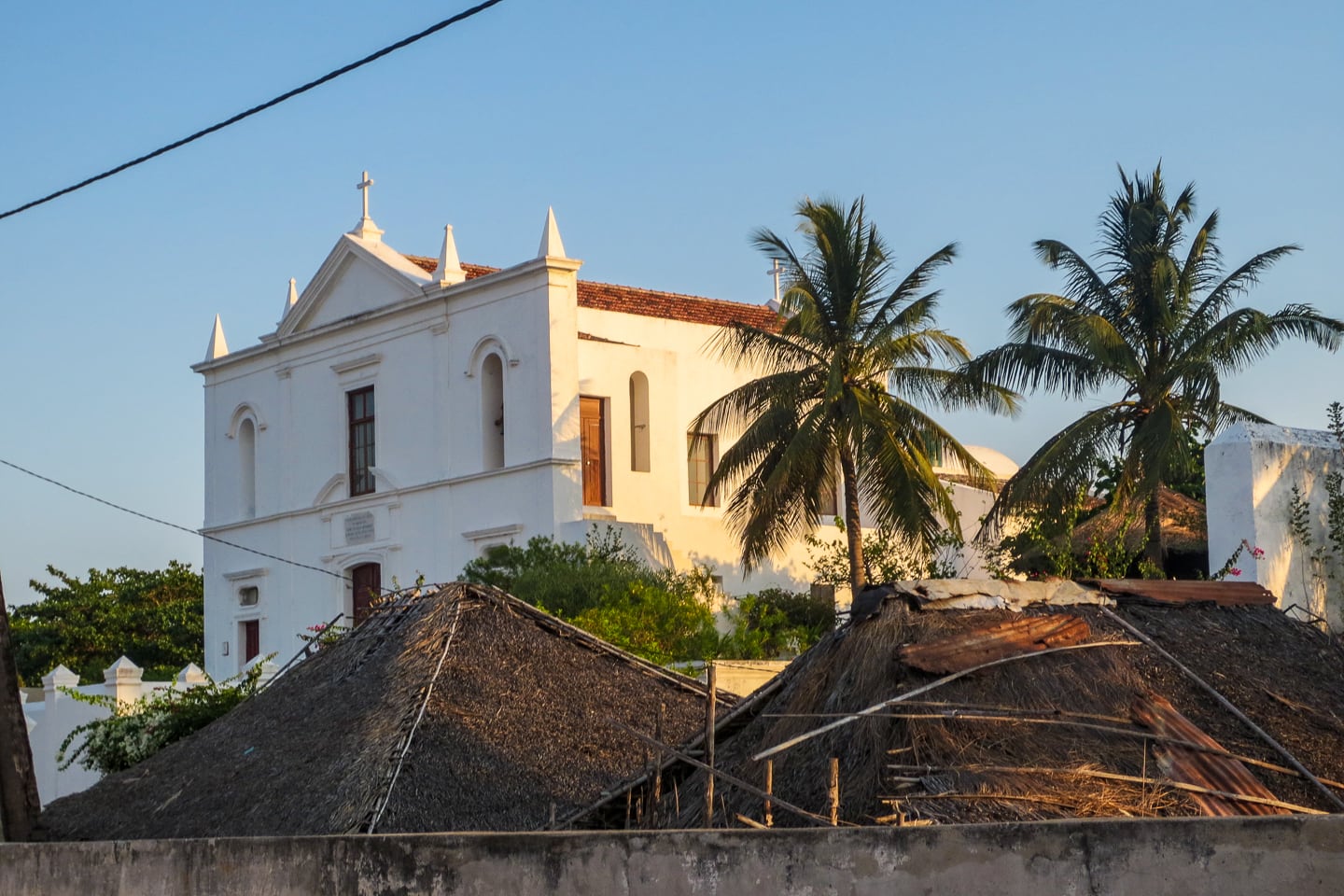 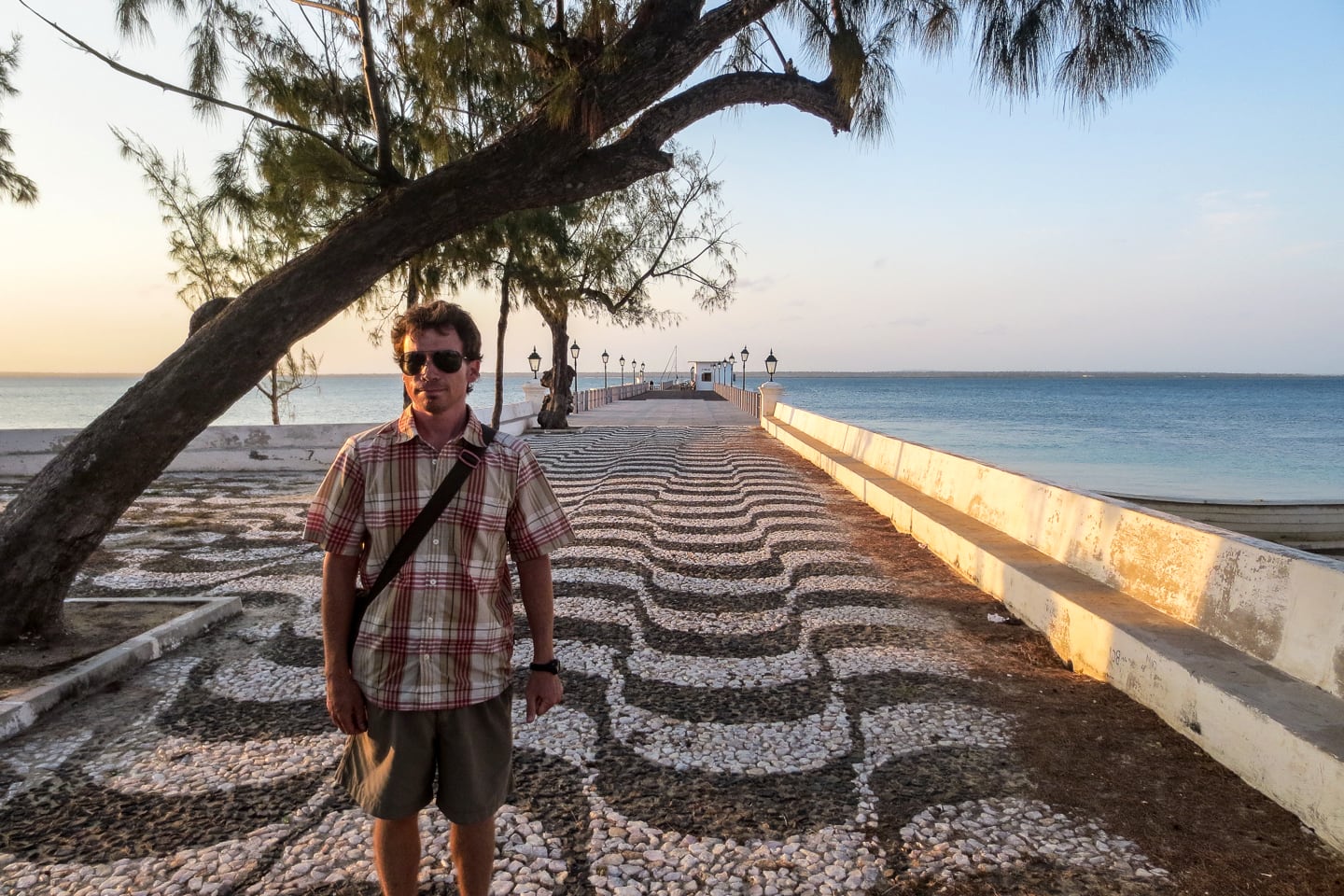 Our favorite sunset activity quickly became getting a beer at O Pontão (the Pier) and watching the sun sink over the bay — beautiful sunsets every night we were there it seemed. After sunset, the island and surroundings get very dark on moonless nights and the end of the pier is perhaps the best place on the island to stargaze. 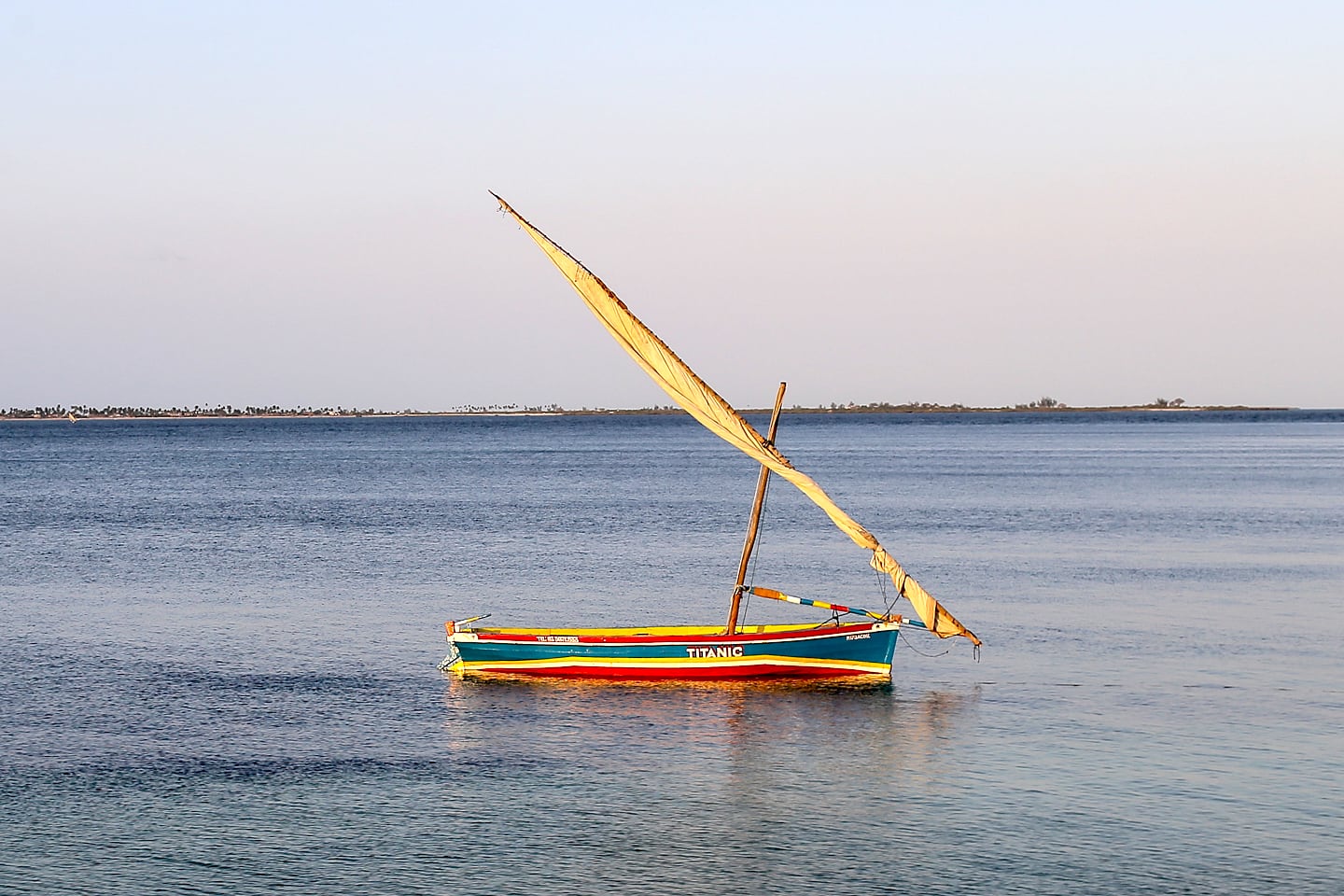 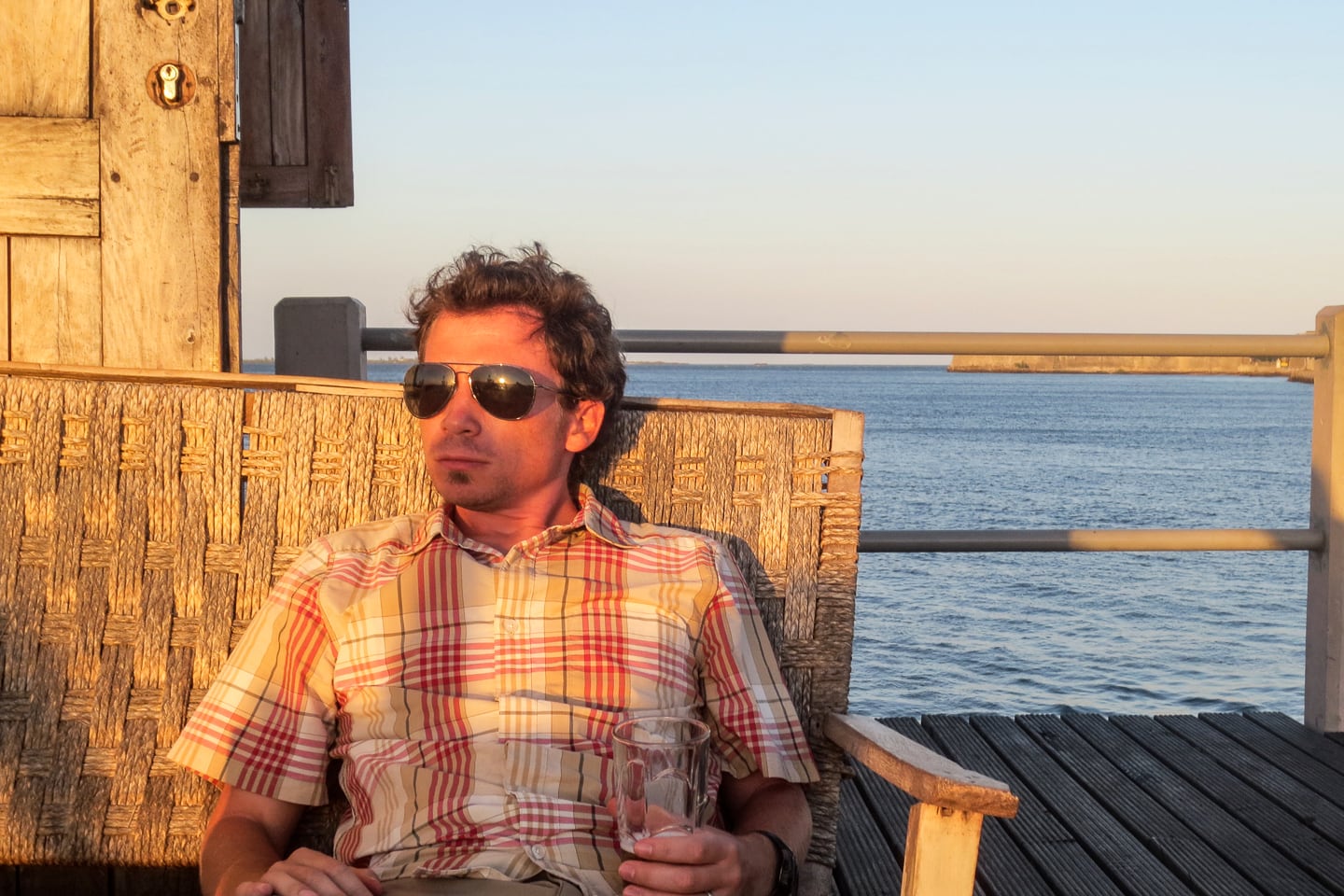 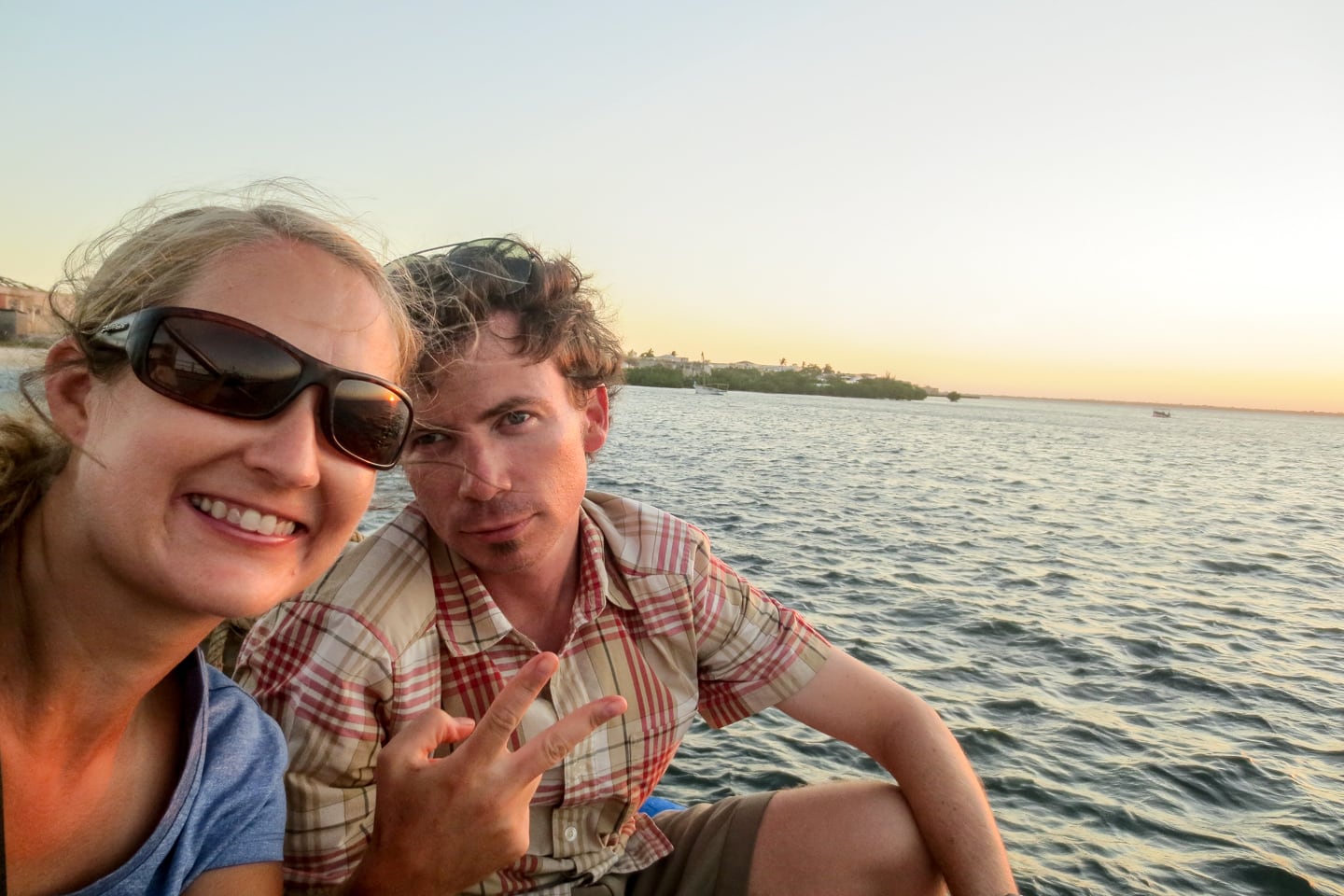 When we reached the end of our five nights in Ilha we found it much more difficult to leave than we thought it would be. But it was time to move on…just the nature of the game I suppose… On to Pemba! 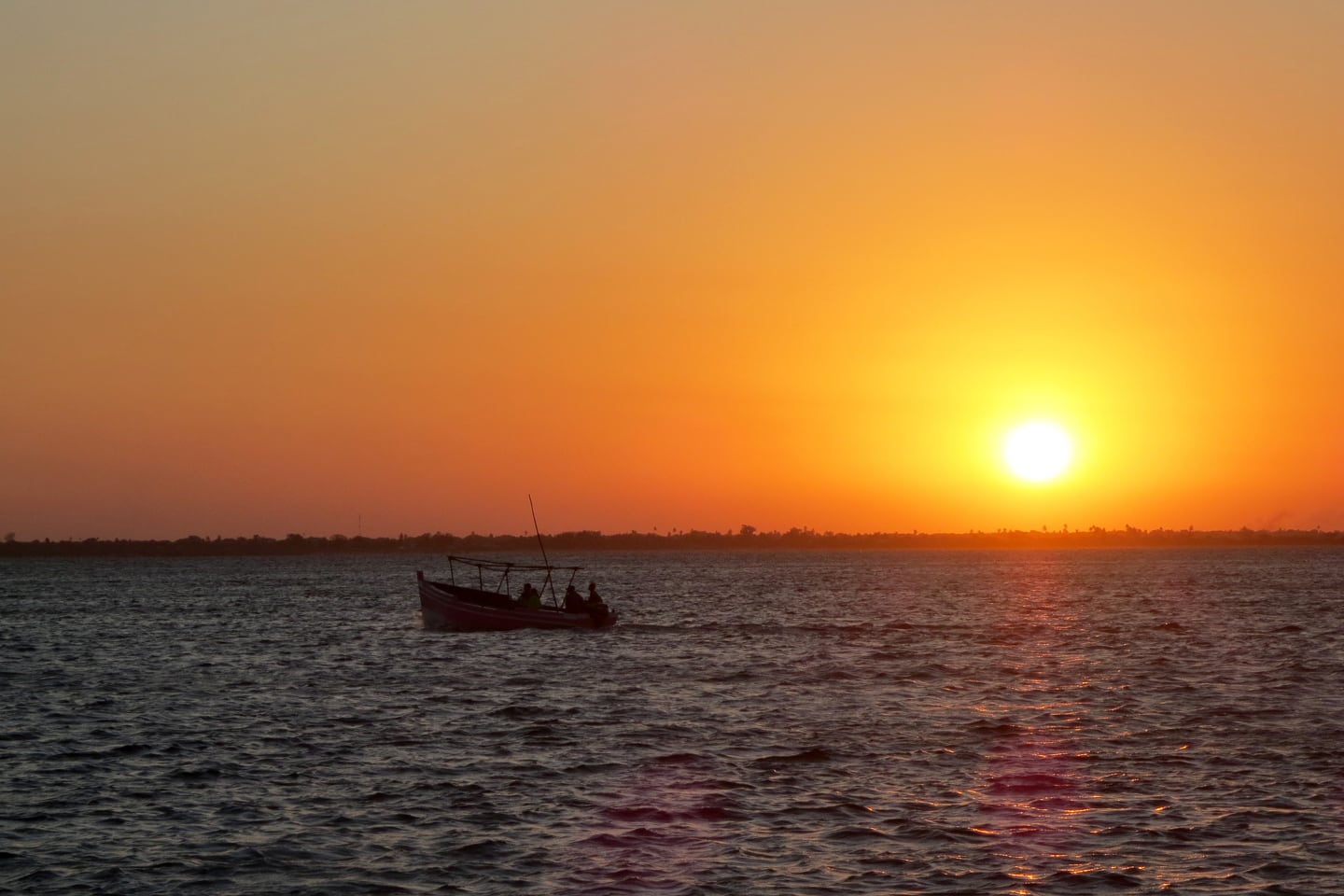 You really know how to keep your readers hanging. It’s easy to see that you like the sea, sunsets and drinking beer.