After a 36-hour haul from Railay, we rolled in late to Chiang Mai and were ready to lay low for a while. Thankfully, Old Town Chiang Mai is just the place to do that. 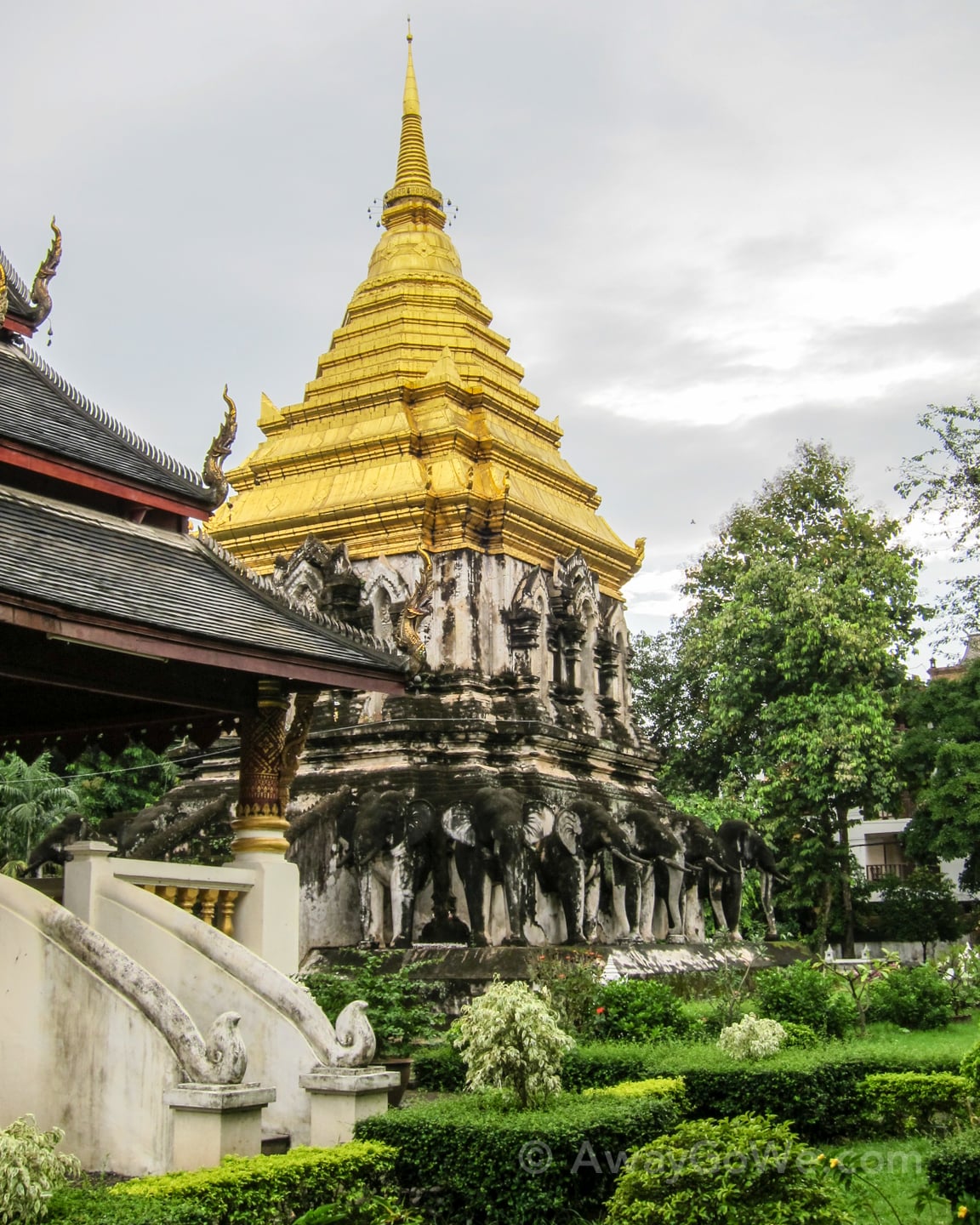 Despite hearing over and over again how awesome the food is in Chiang Mai, we didn’t end up having a lot of Thai food over the six nights we were there. We had already been in Thailand for three weeks, feeding largely on Thai food, and while it’s generally hard for us to get tired of Thai food, we were just that. Plus, we were coming up to four months on the road, which is just about the time when the promise of decent Mexican food takes on legendary proportions. 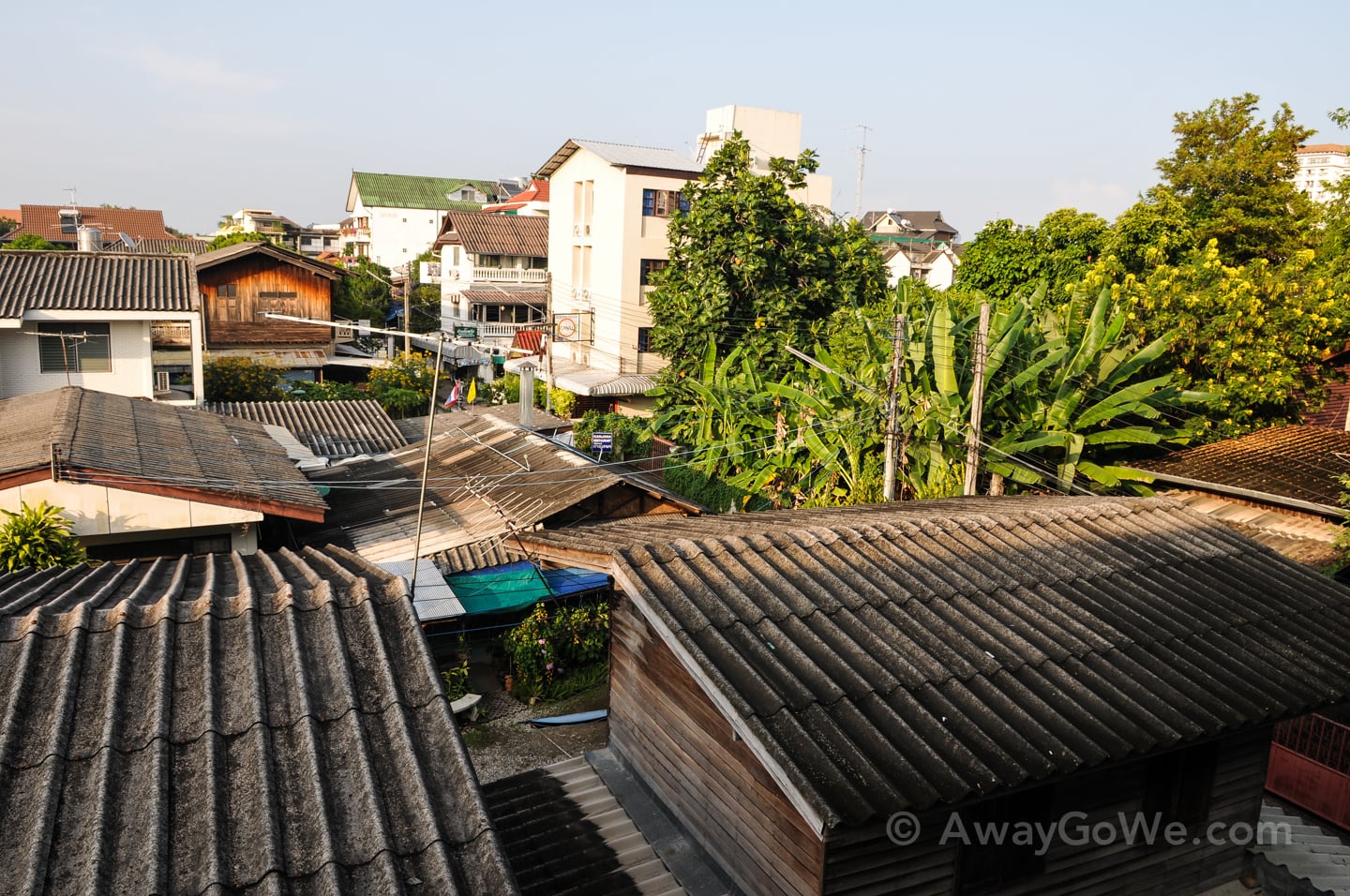 All of the lodging photos here are of our fabulous room at Rendezvous Guesthouse, where we ended up spending five of six nights in Chiang Mai.

We had booked our first night at Thapae Gate Lodge, which had great reviews on TripAdvisor and was US$2 cheaper. Our train arrived two hours later than expected. We had told them a time, and the train arrived late. We didn’t have a Thai phone but this hadn’t been an issue in the past in Thailand. But of course, following a 36-hour travel day, it was an issue.

The manager came out and they ended up finding a room for us, but with the most horrid attitude of any guesthouse up to this point in Asia (which was saying a lot considering our stays in China). As a result, we packed up and left immediately the next morning, heading straight for our second choice, which really should have been our first choice all along: Rendezvous Guesthouse, a stone’s throw from the Night Market and the center of the old town. At the time, saving US$2/night seemed like a big deal (two beers, after all!), but sometimes, you should just pay the extra two dollars… 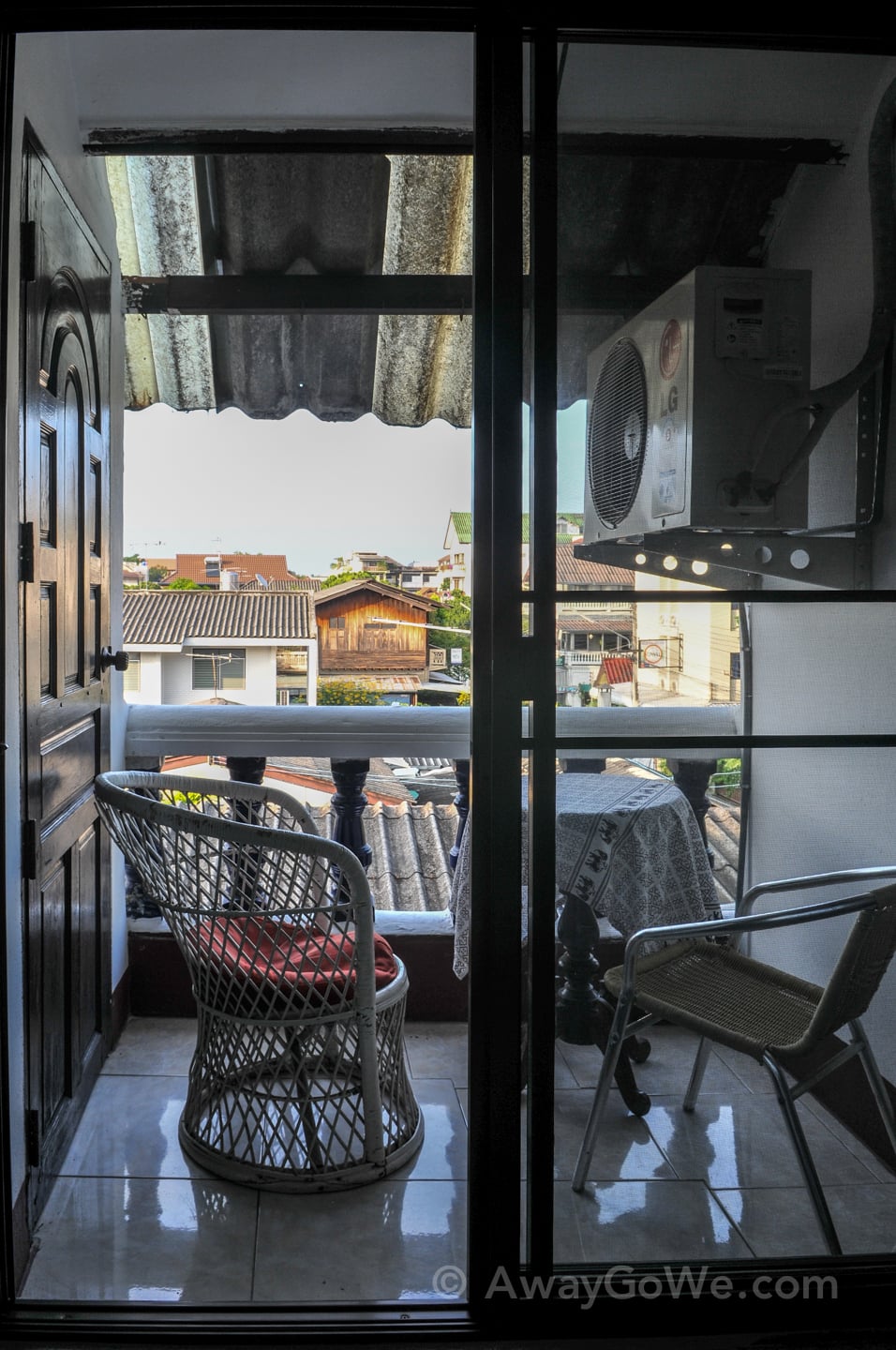 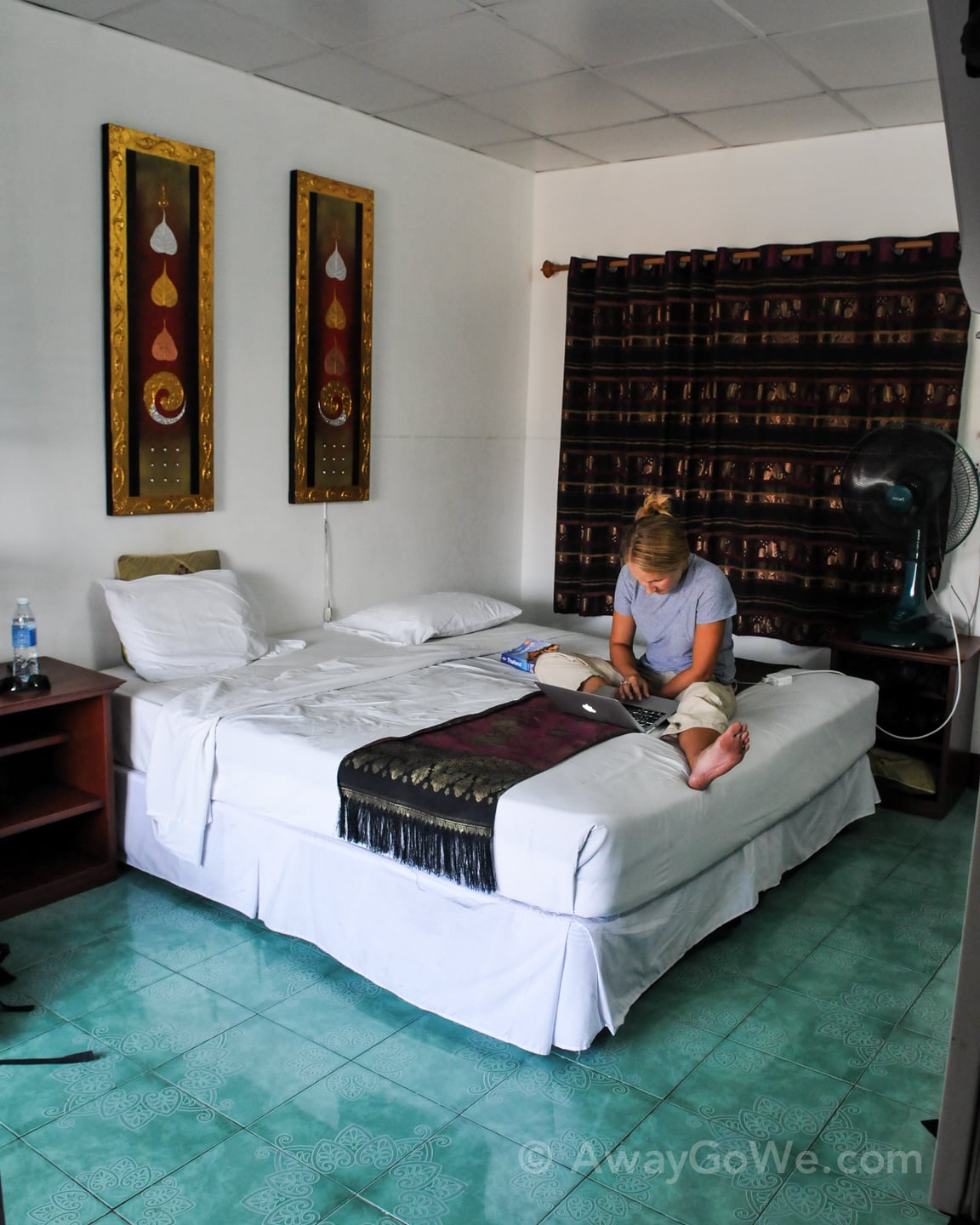 Like I said before, not a lot of Thai food consumed by us in Chiang Mai. For us, Chiang Mai was a chance to savor some of the more difficult to find fare in the course of our travels to that point. That including taking advantage of the city’s fantastic collection of cafes and coffee shops. 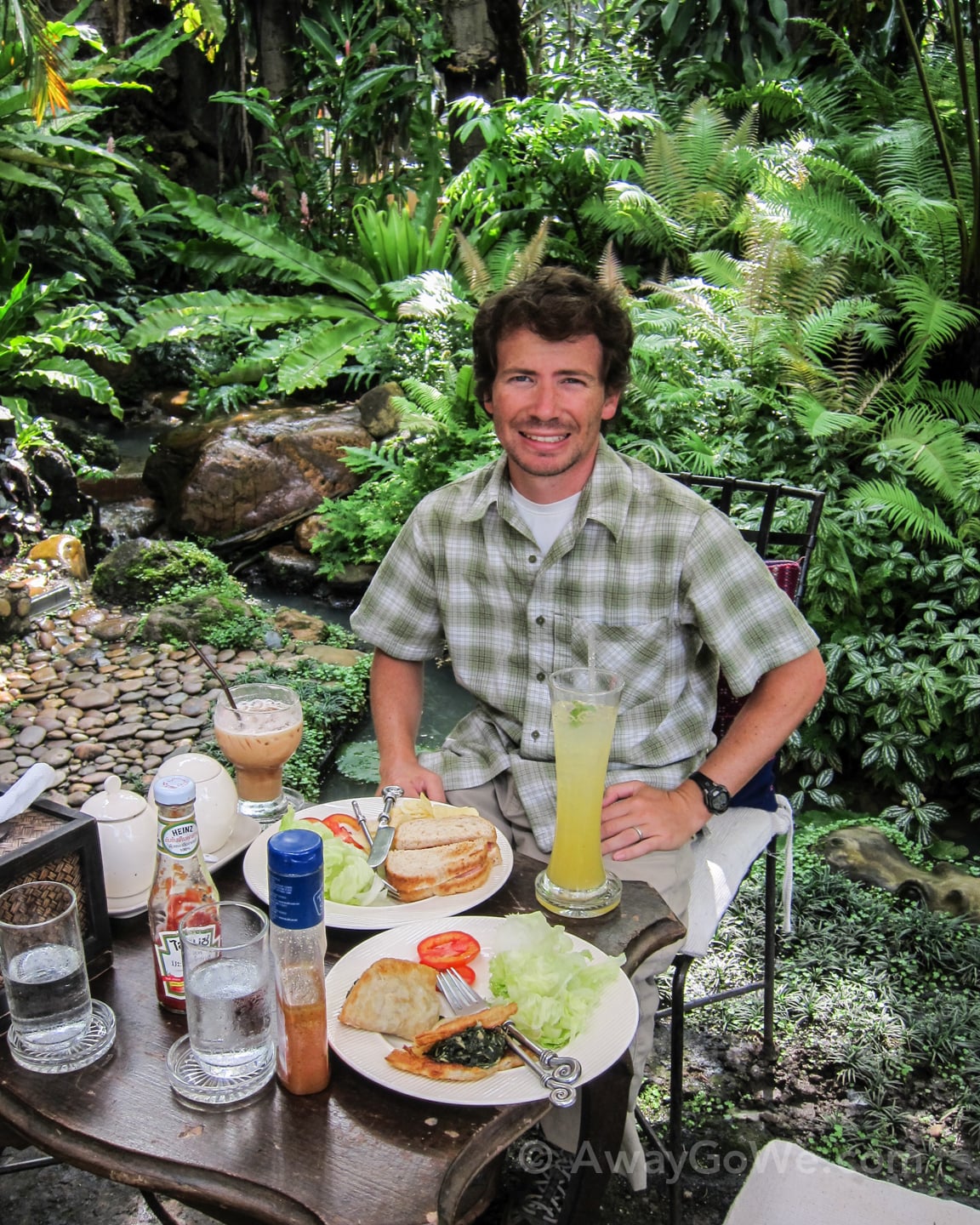 And what trip to Chiang Mai would be complete without visiting a bajillion wats (temples)? There’s so much to see in and around Chiang Mai, it can be a bit daunting (and trust me, no matter how cool a wat is, it is only as cool as the amount of time between wat-viewings — i.e. it’s very easy to get templed-out in a short period of time in this place). 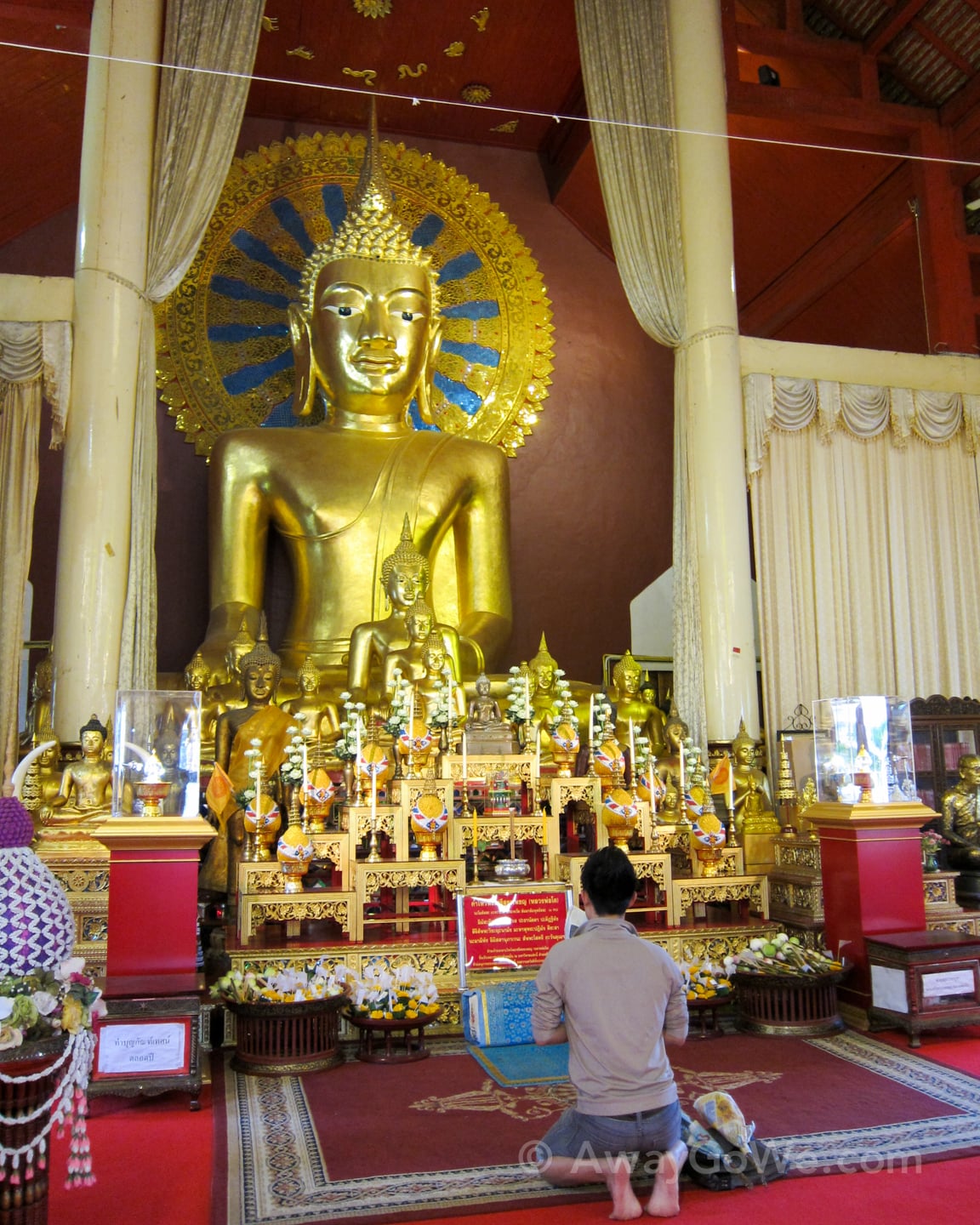 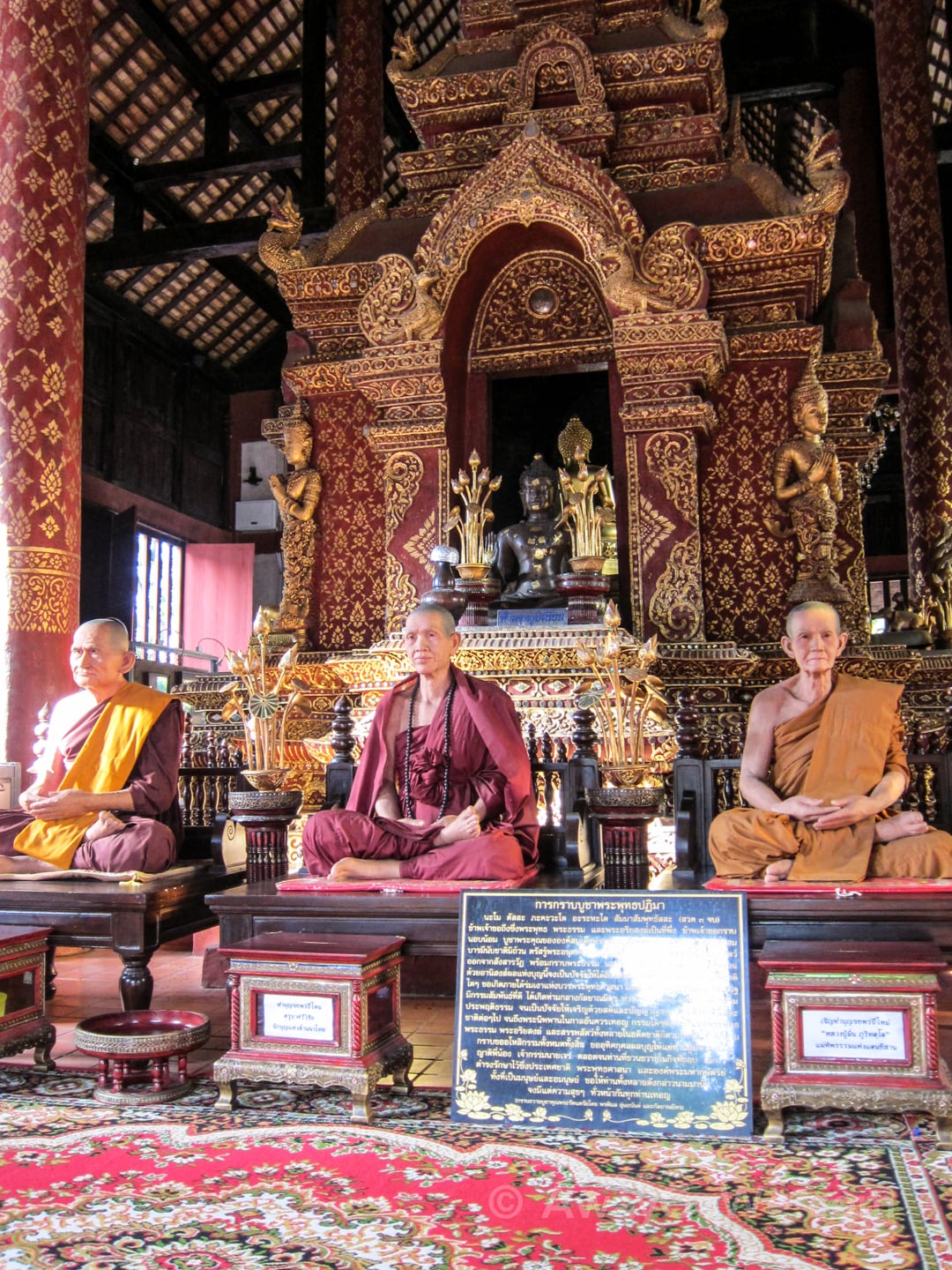 …but something tells me these ones don’t mind (Hint: They’re wax!)

Not creepy at all. And how they’ve managed to not melt in the tropical heat is beyond me. 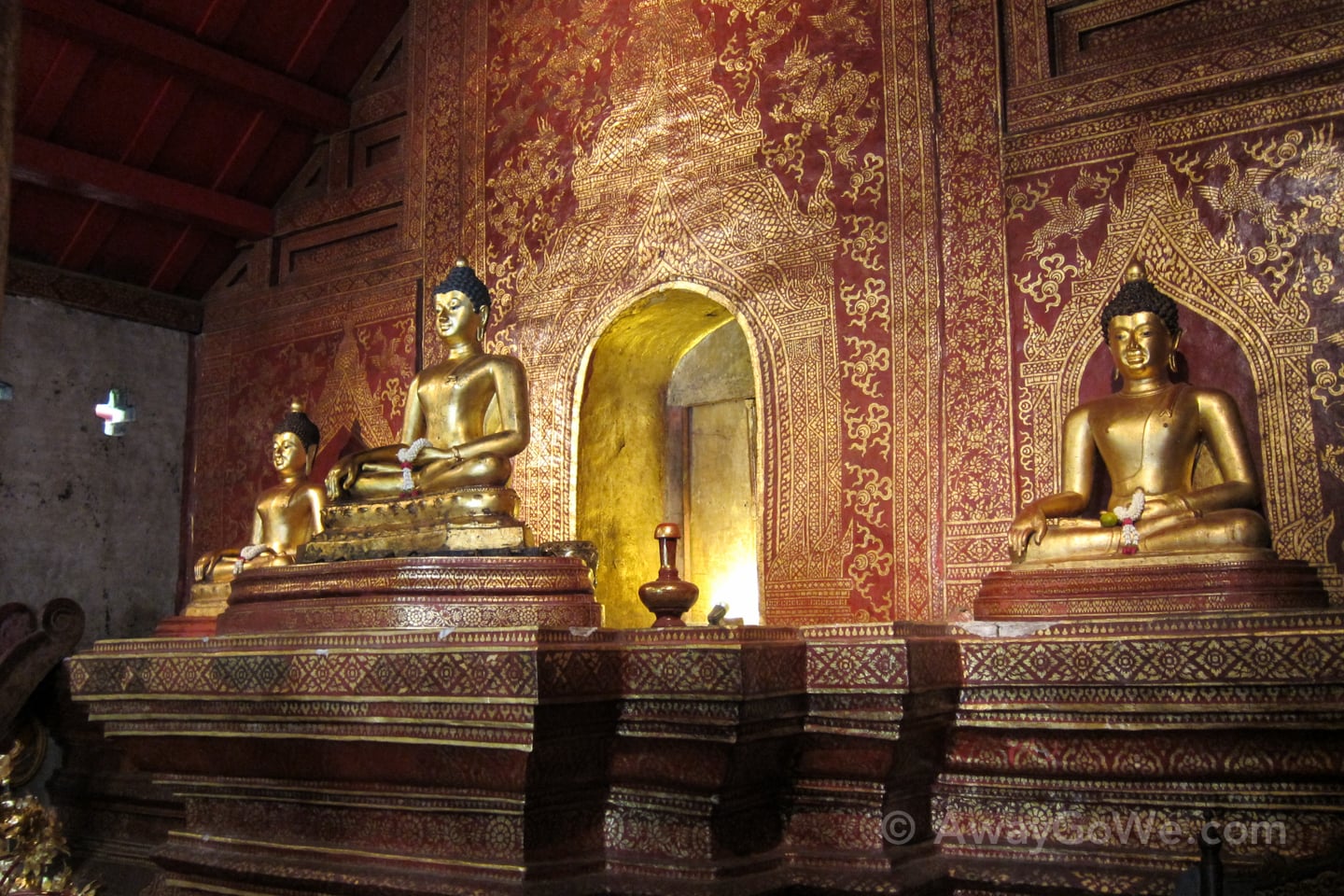 While the wat novelty may wear far before visiting all 18 of the areas esteemed temples, it’s important to remember that Chiang Mai’s cultural heritage is the essence that makes the city what it is. No matter how good the restaurants, how foreigner-friendly the amenities, how Farang the city has become (and there are so many white expats here), it is, first and foremost, a place of deep cultural importance.

On that note, time for a Thai massage! (we are on our honeymoon, after all…) 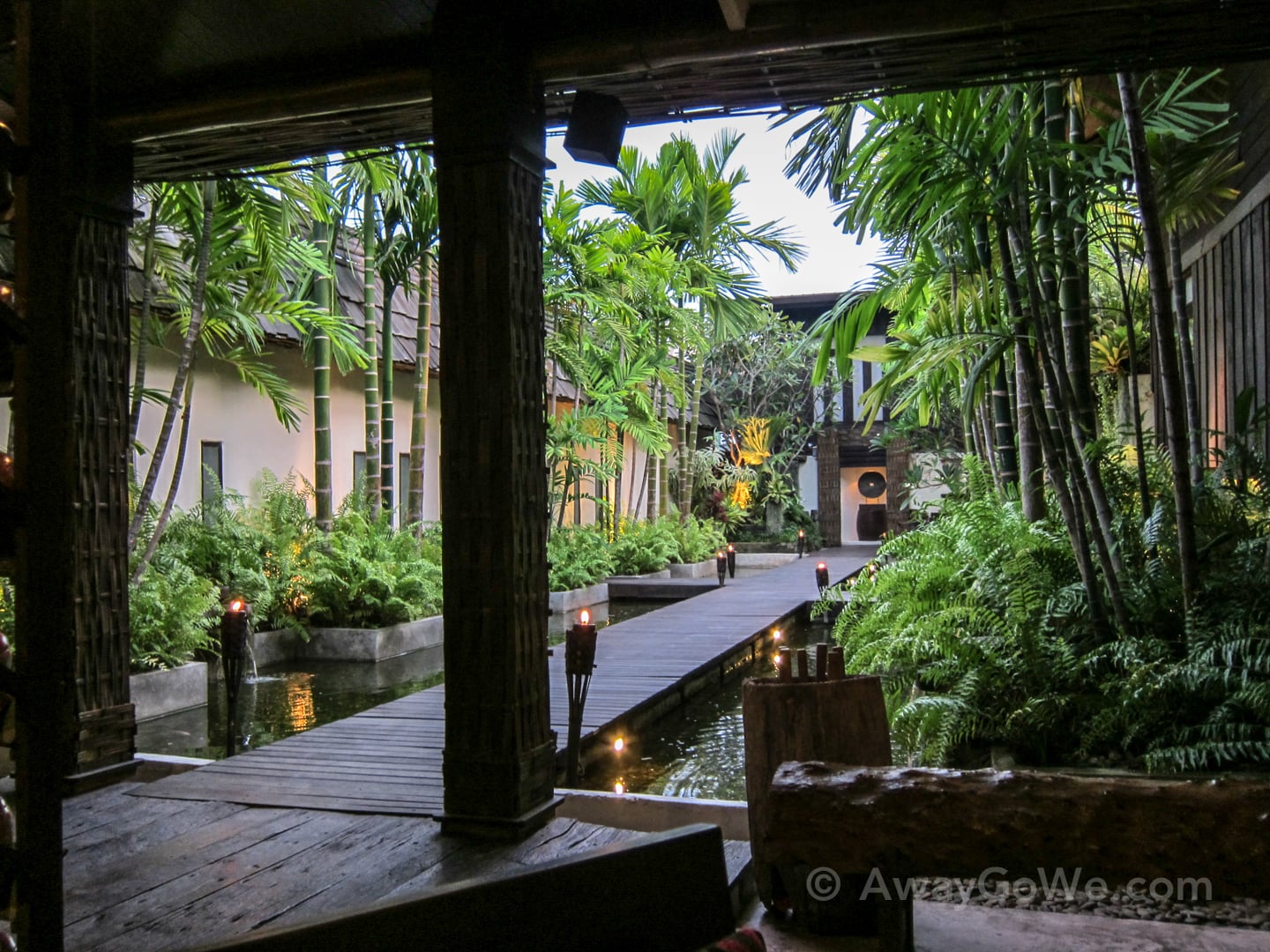 A close friend and her family got us a couple’s massage at Fah Lanna Spa in the heart of the Old City. It was my first professional massage of any kind, and I can safely say it won’t be the last. Thankfully, my PT wife is a big fan of such things as well.

I’ve long heard the importance of picking up some tailor-made clothes while in Thailand, and thought I’d save that adventure for Chiang Mai. I’m happy to report it was the right call. There are many to choose from in town, but Mr. K won me over, and busted out two quality, tailor-made dress shirts in two days. Mr. K will also keep your measurements on file if you ever want to put in an order from across the pond — that is, if your measurements don’t change after indulging in all of those steaks, cheeseburgers and burritos you missed while traveling… 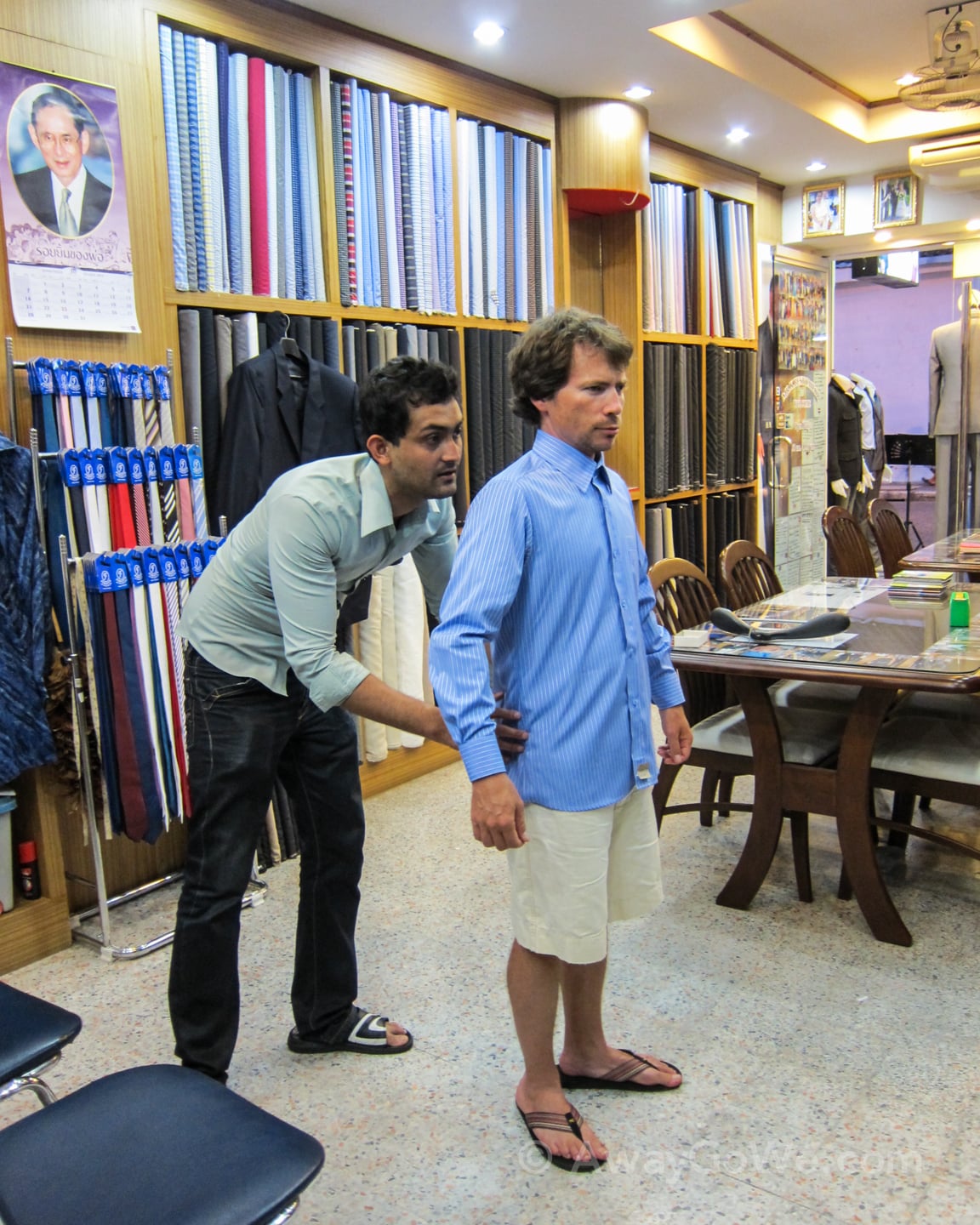 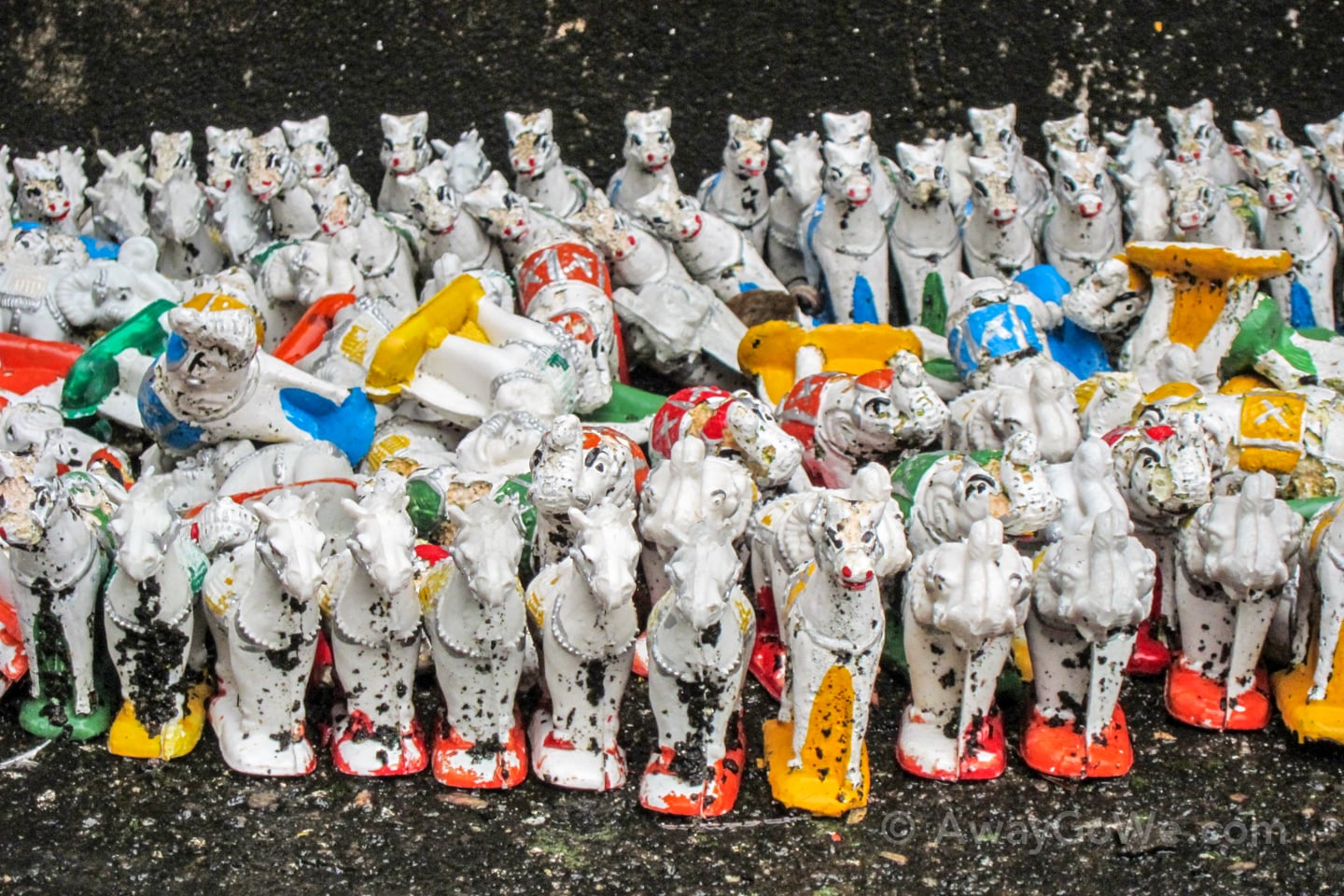 And lastly, I was feeling like this post wasn’t a great representation of the local culture, so I thought I’d throw in a visit from this little corner coffee shop we discovered during our time there. 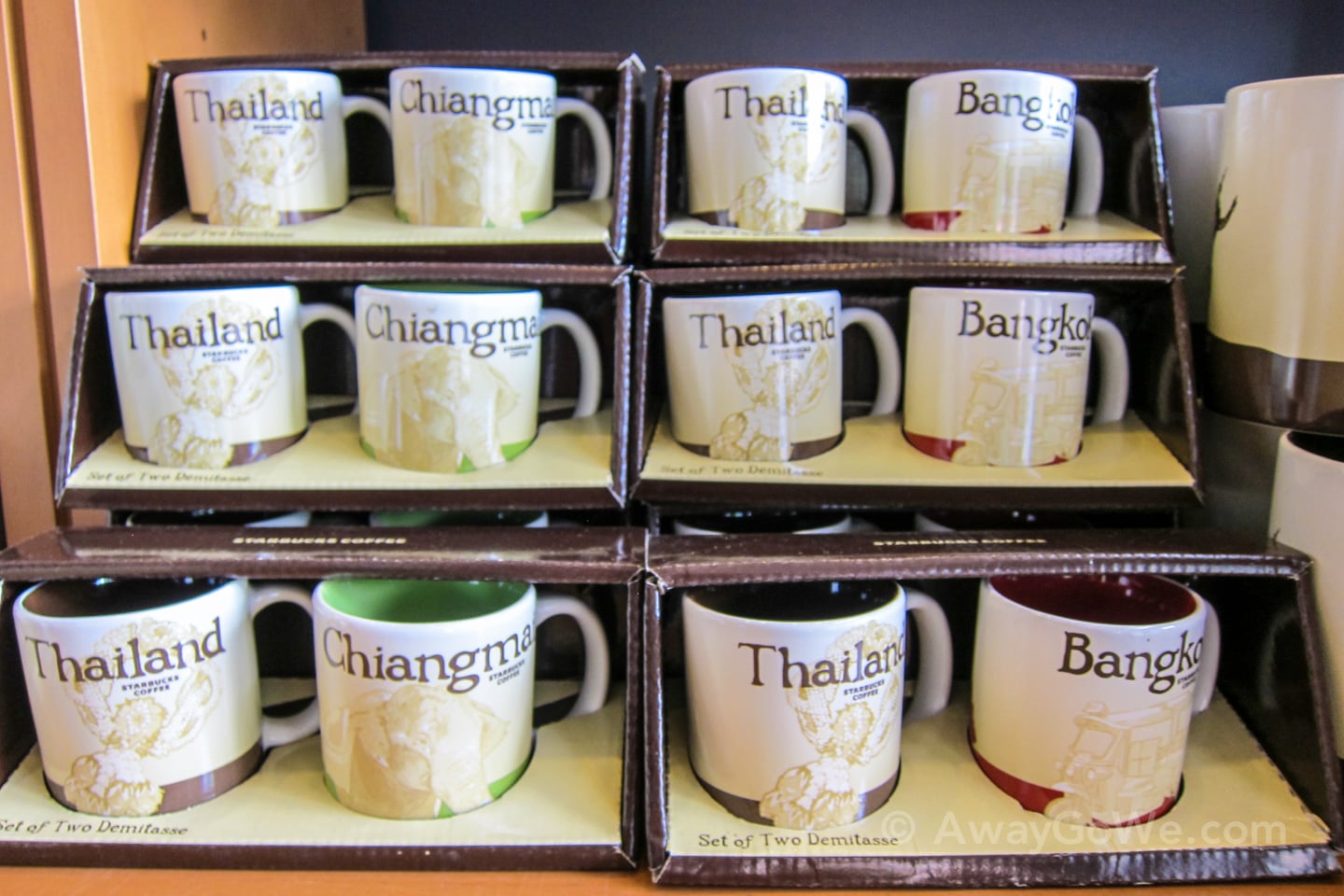 In all fairness, this is one of two Starbucks in like a thousand mile radius, and an Iced Grande Mocha just sounded delicious, so we splurged and split one. Yes, you are right!–the equivalent of three large Chiang beers, but no regrets here. 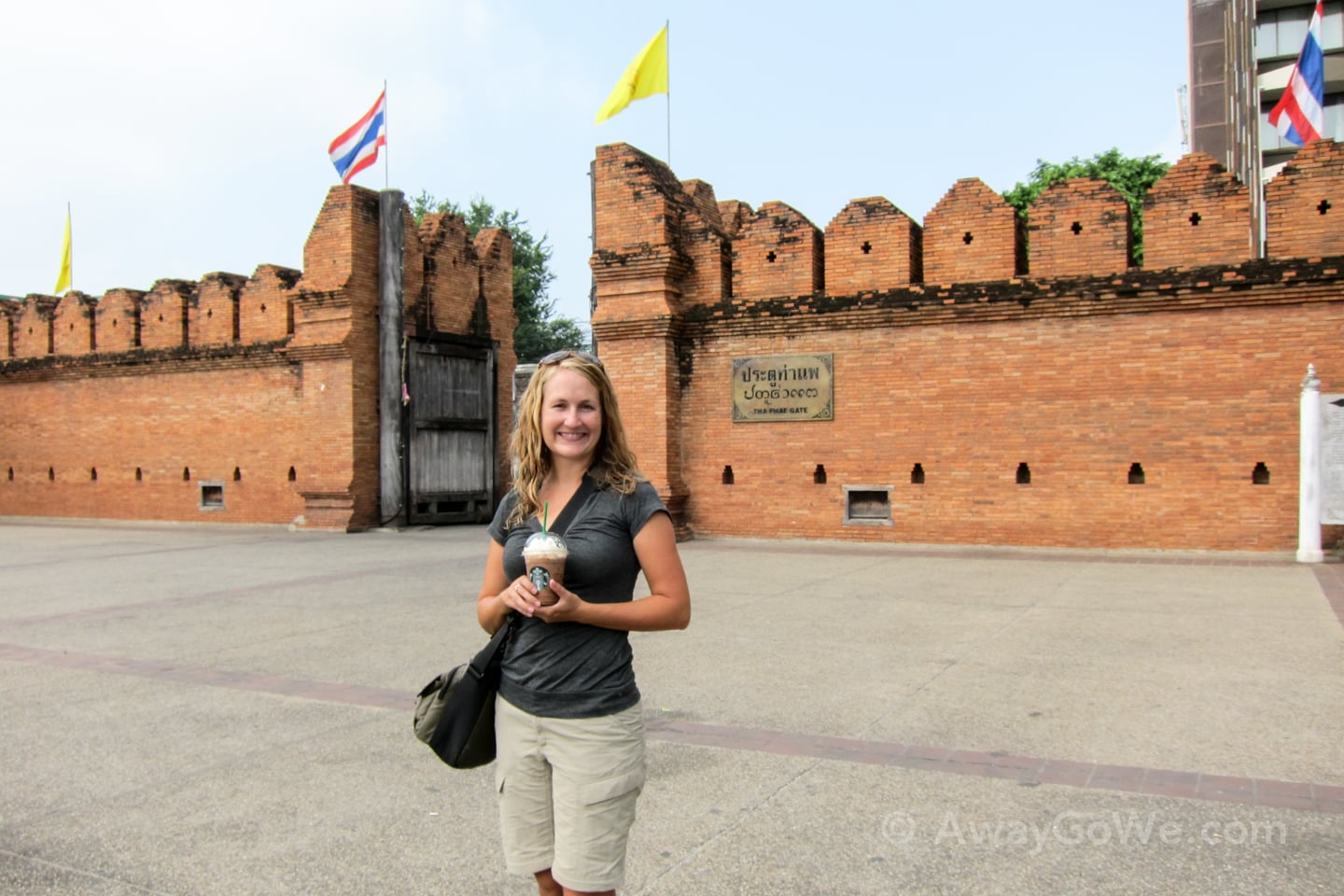